Our boat tour on the Spree to the landmark of Berlin

Finally I report back after spending my Easter vacations with the family in Berlin. It was my second time in Berlin, a few years ago I've been there with my parents, and I had forgotten how beautiful Berlin can be! Have you ever been to Berlin? It has very different facets and I think just for people who want to have it a bit busier a nice destination. We were there for five days and had chosen a hotel near the city center, so we could easily go by public transport and in case of need also walk once. The hotel was good, everyone was very friendly and service oriented, so we felt comfortable there. 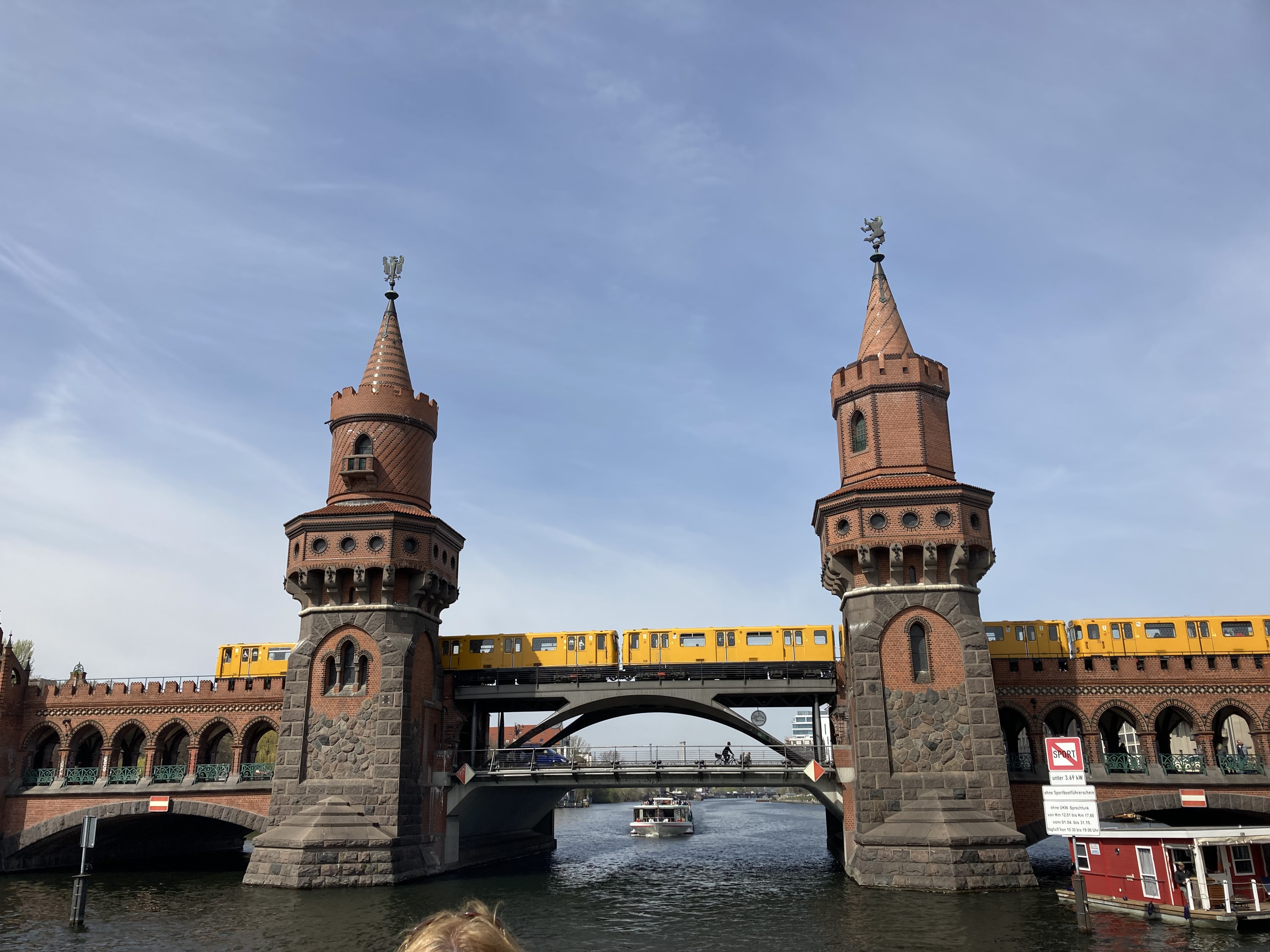 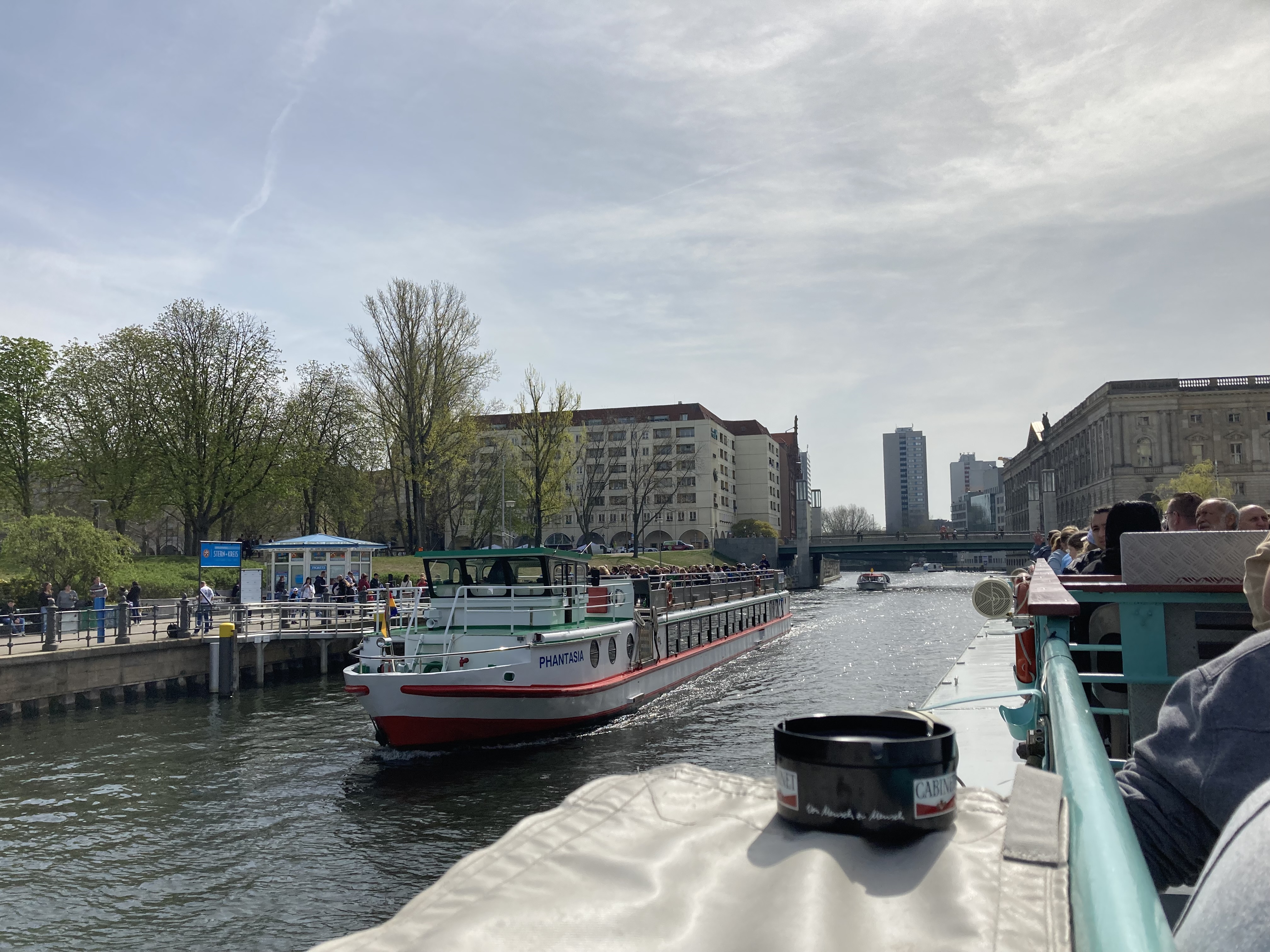 The "Alte Börse" with the television tower in the background

First of all, today I want to tell you about our boat trip that we took on the Spree River. The pier was called "Alte Börse" and from it you could see the TV tower in some distance, but I do not want to go into detail, because I want to show it to you in one of my next posts. Shortly before the boat tour, we ate breakfast in a small cafe near the pier, I think it was only about 400m distance between them. I had scrambled eggs and a hot chocolate, both tasted very good. On the tour we sat on top of the deck, the weather was great for the tour, as ordered!:) 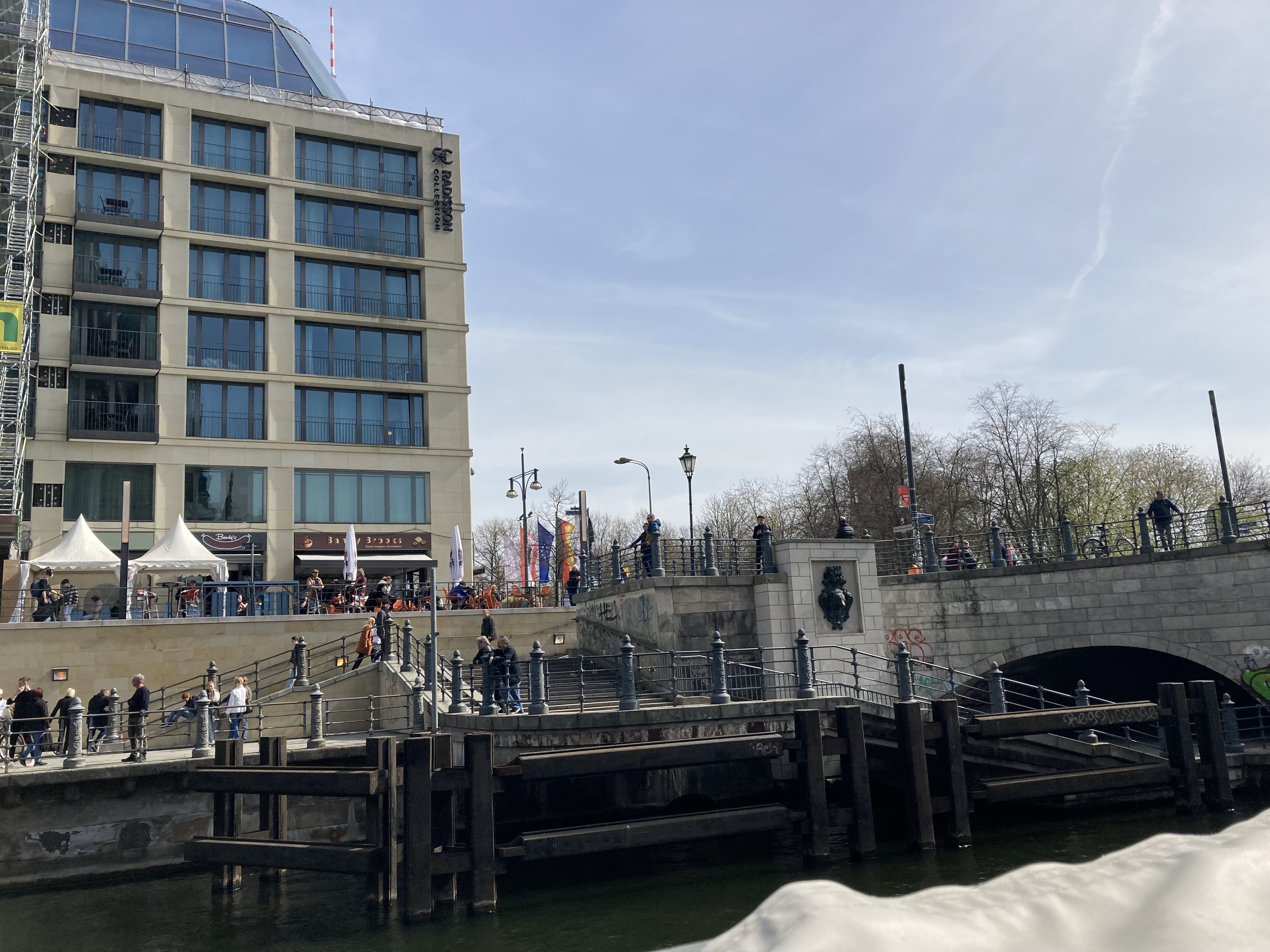 While we were having our drinks, the boatman told us over the loudspeaker what the buildings on the left and right of the Spree were and told us the story behind them. First we started with the right side, which I found good for orientation, because otherwise you would always have to jump from one side to the other.

Later, we got two ice cream scoops each at the corner of this building, which were really good, although I was a bit skeptical at first because it wasn't a straight ice cream shop. 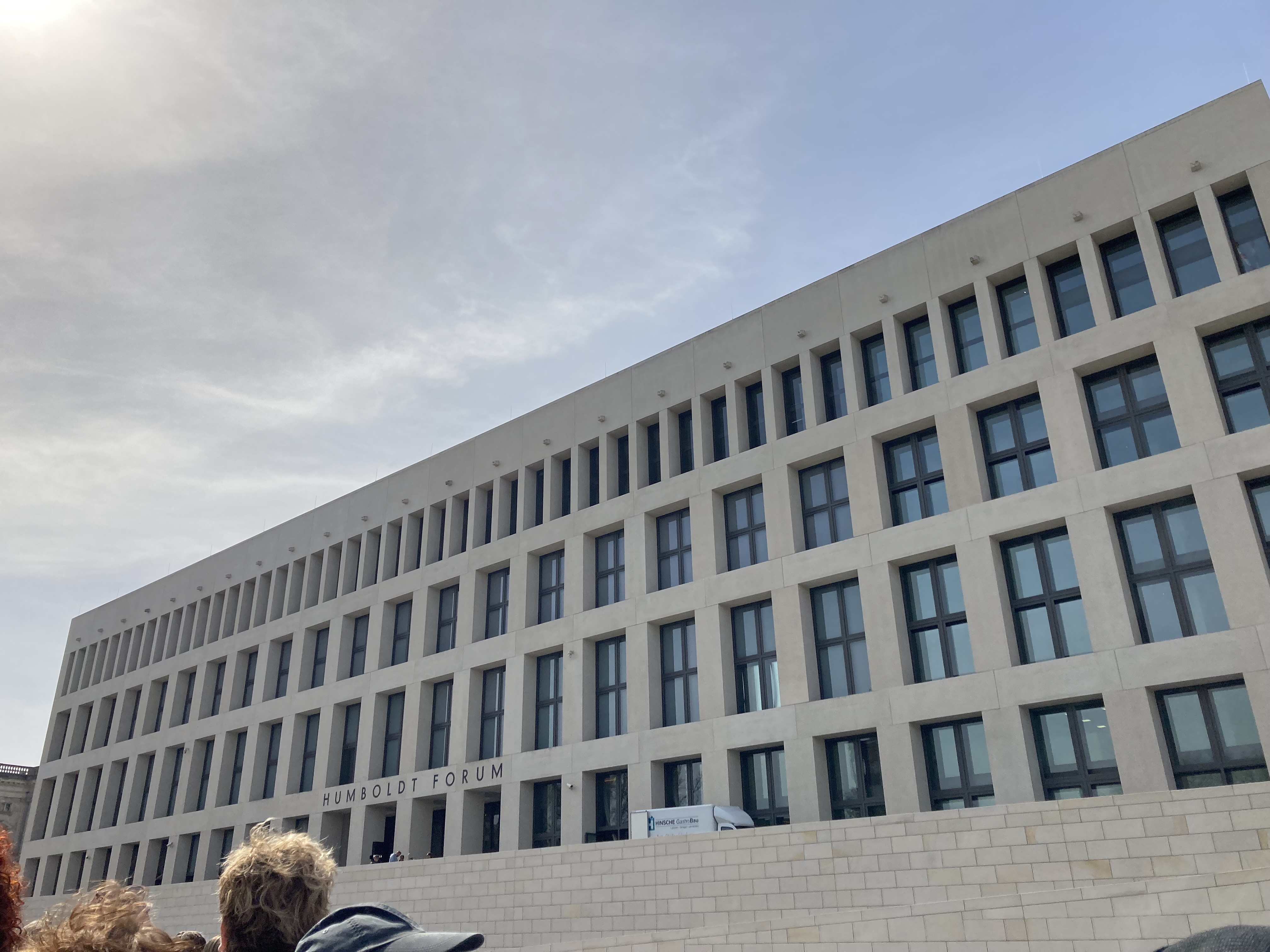 On this picture you can see the Humboldt Forum, which looks architecturally pretty great in my opinion. It has an area of 30,000 square meters and the walls in front of it belong to the "Spree-Balcony", as the boatman said. The architect is Franco Stella, who won the reconstruction in 2008. Unfortunately, we have not managed in the following days to go into the Humboldt Forum, but that is definitely still on my list for more Berlin tours!:) 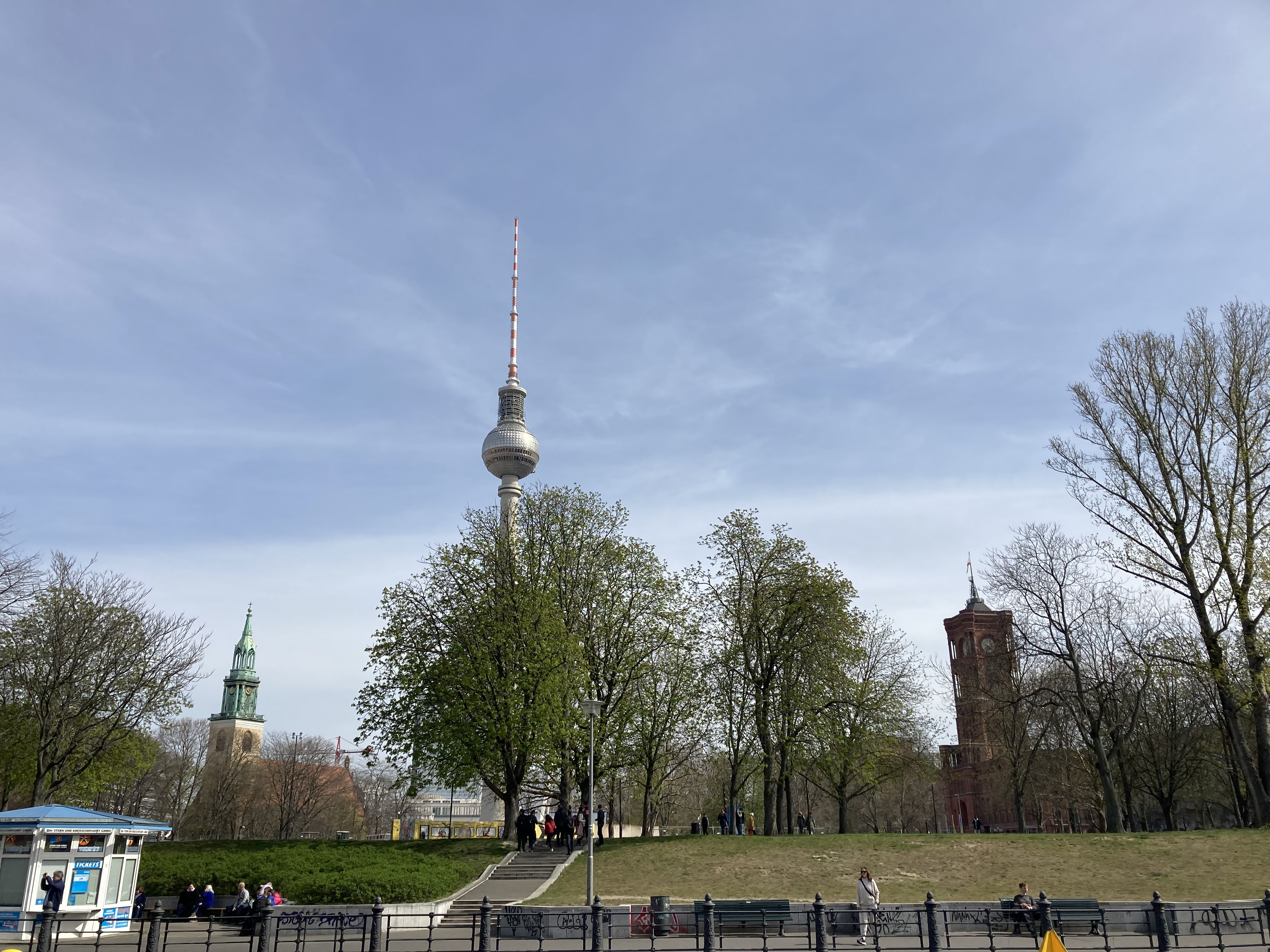 Here you can see the pier with the TV tower in the background - on this day it was about 15 degrees and summer feelings came up! 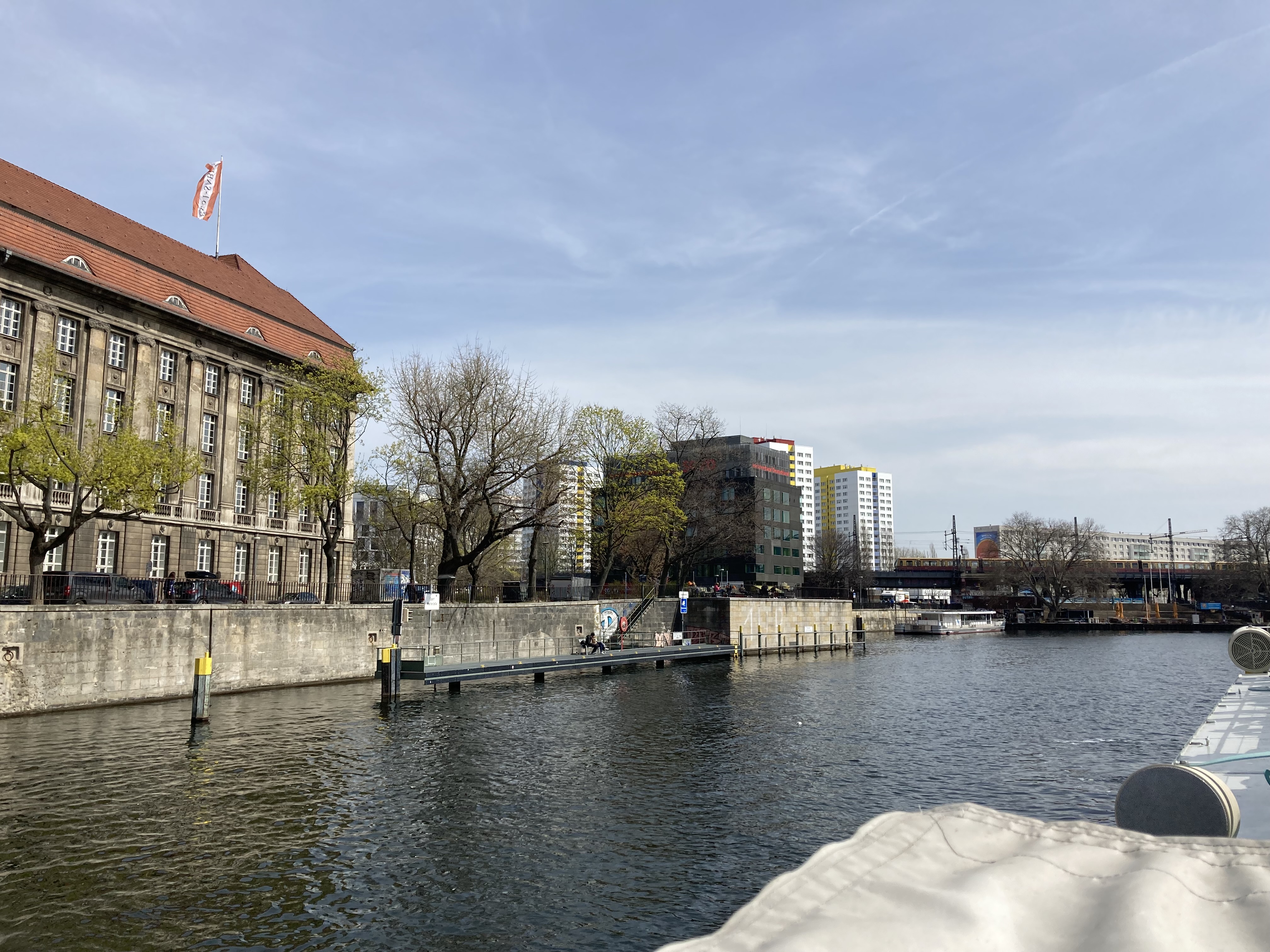 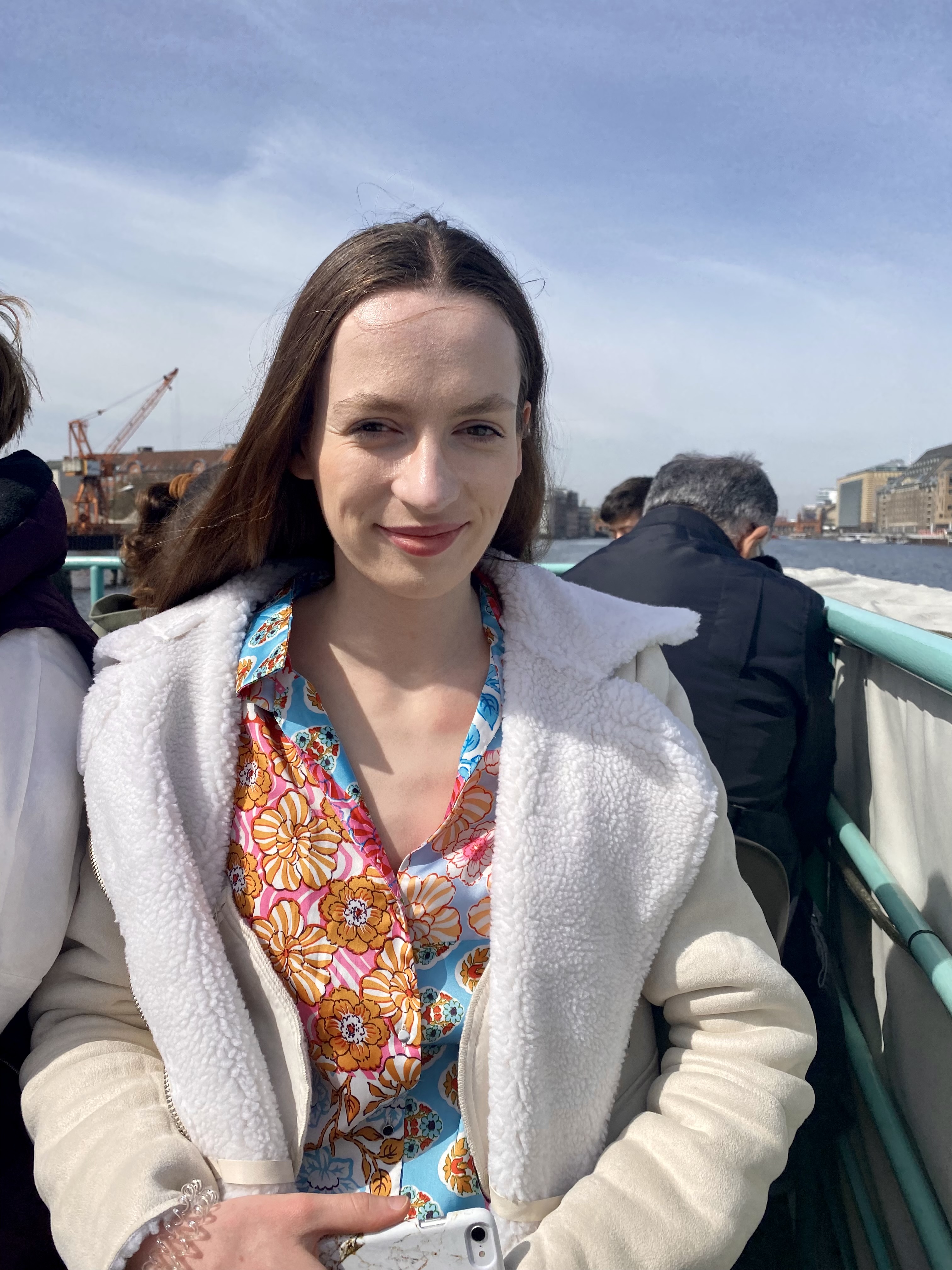 During the ride you could order drinks and for me there was a large Coke as a refreshing drink.
And it was also the first day this year that I used suntan lotion - although it is always quite sticky, the smell reminds you of summer and vacation - a nice feeling! 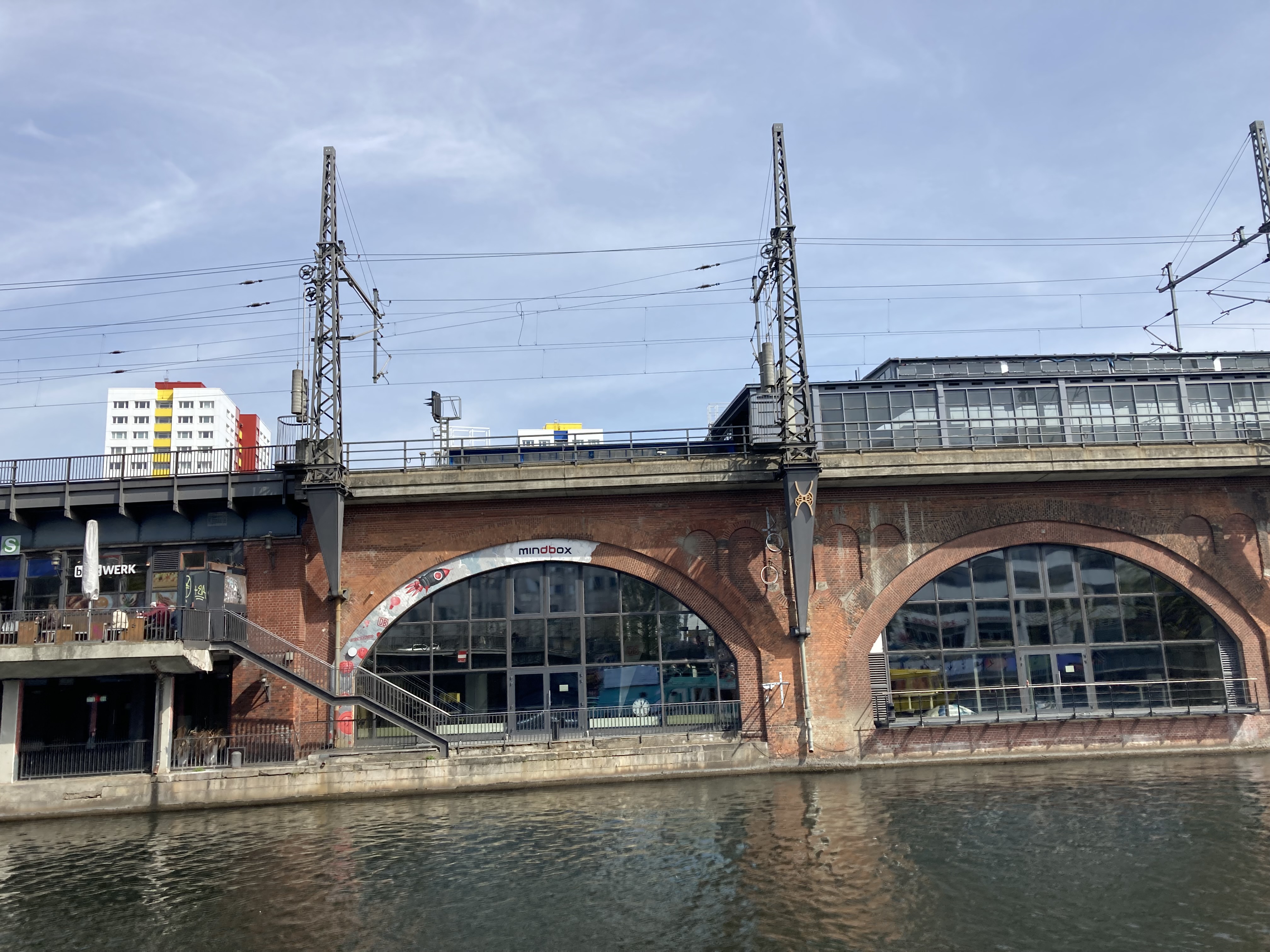 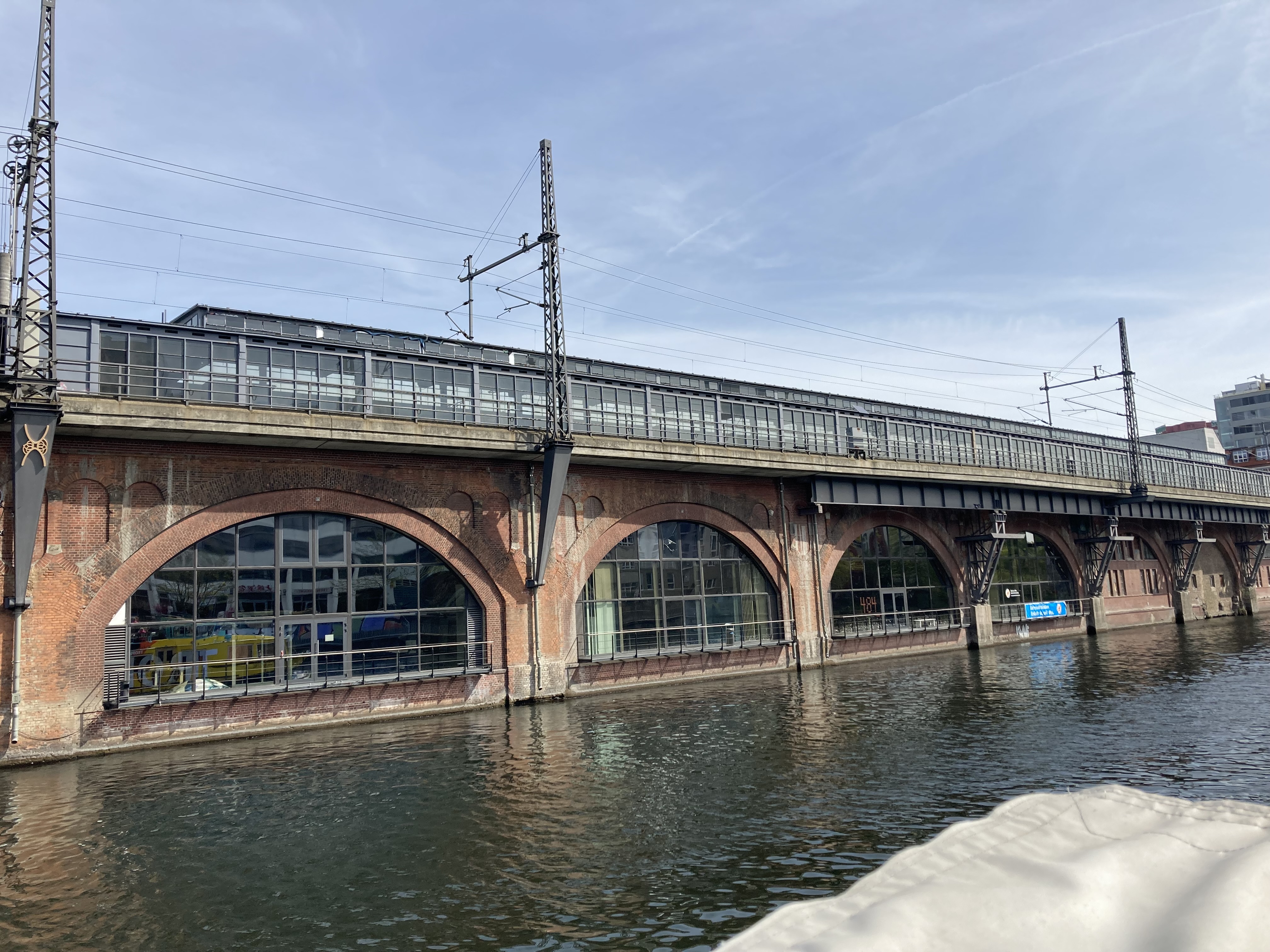 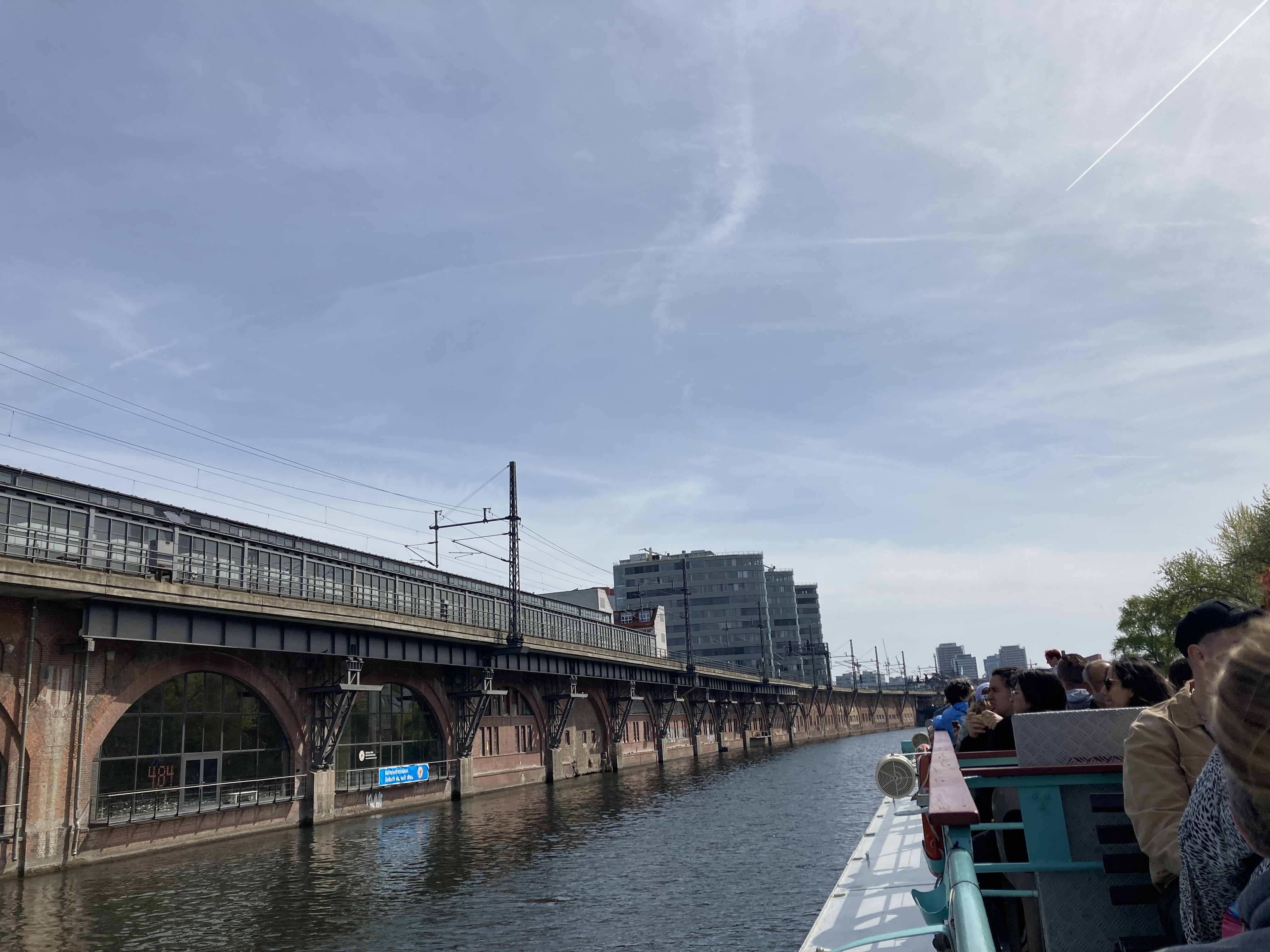 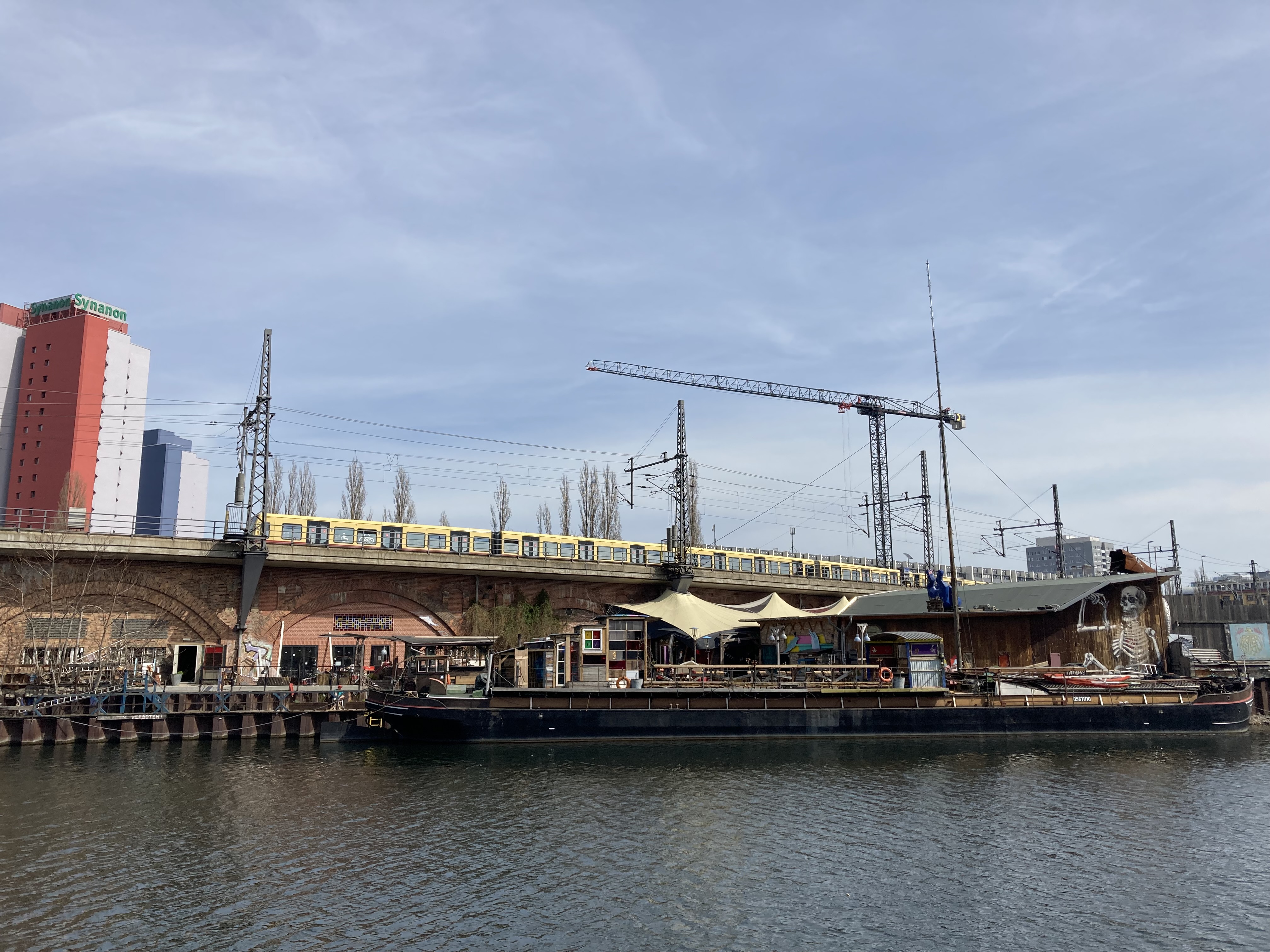 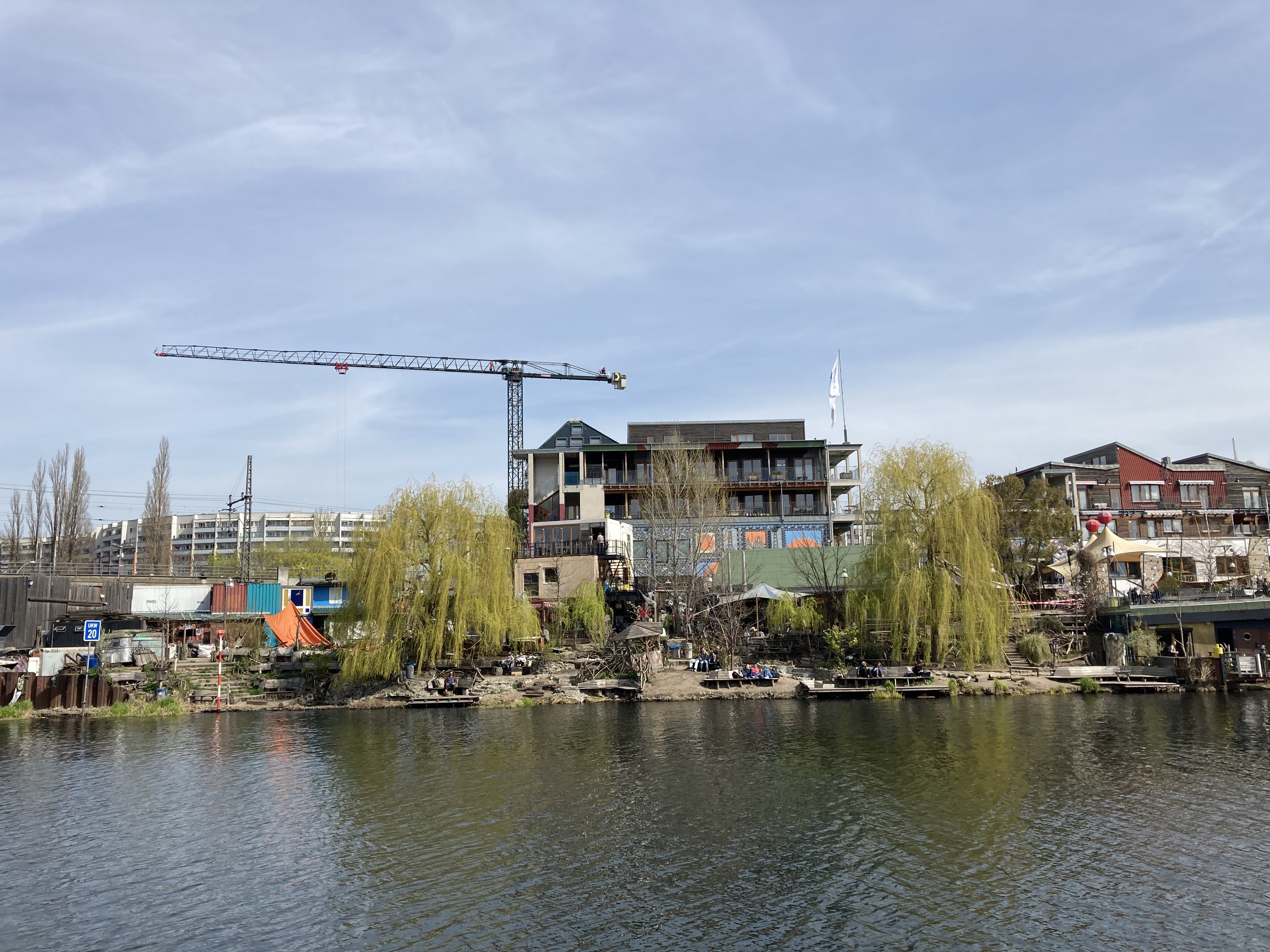 Here are some cafes along the Spree, they looked a bit alternative in a positive sense! If we had not booked dinner later, I would have smoothly passed there:) 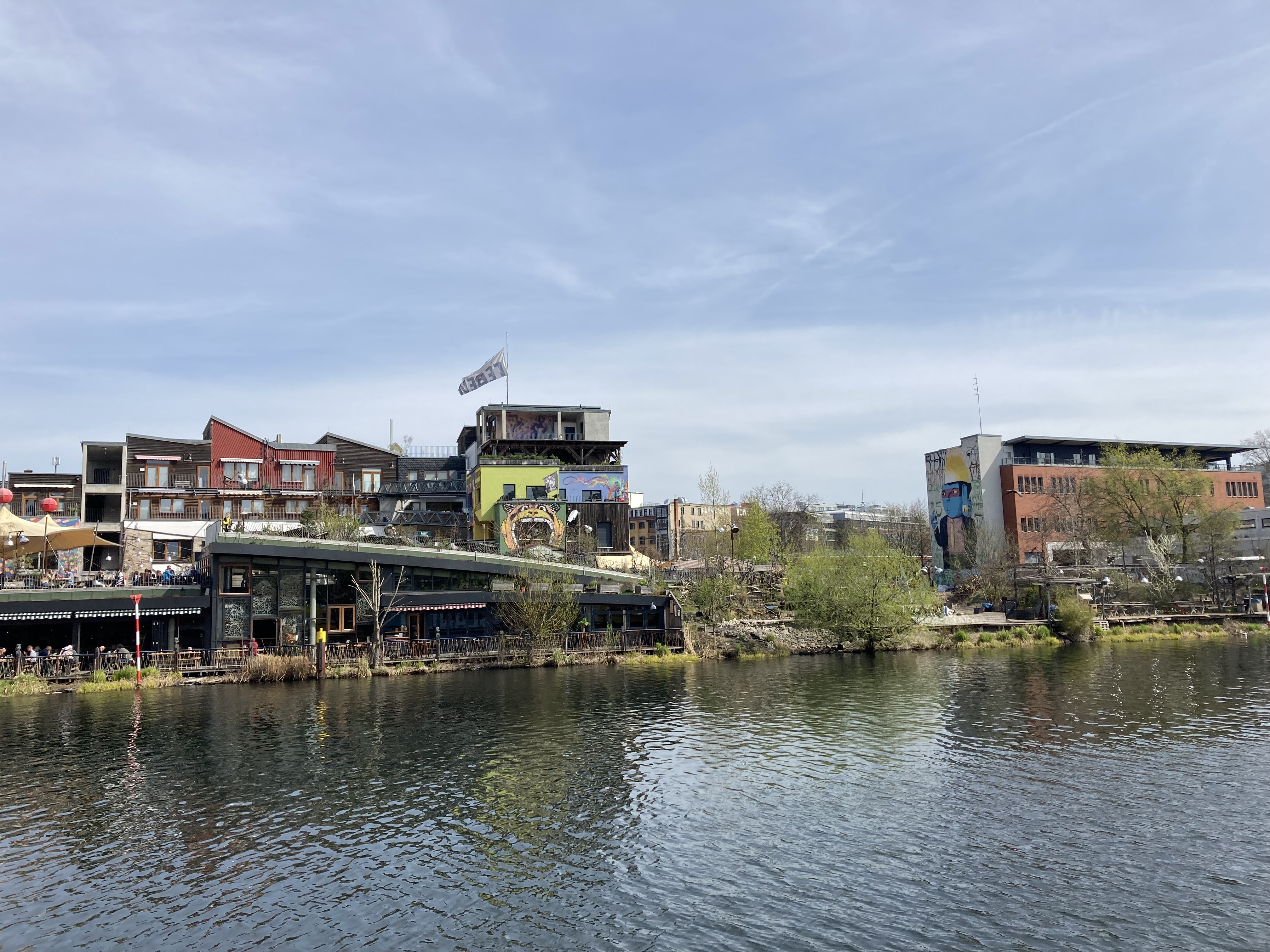 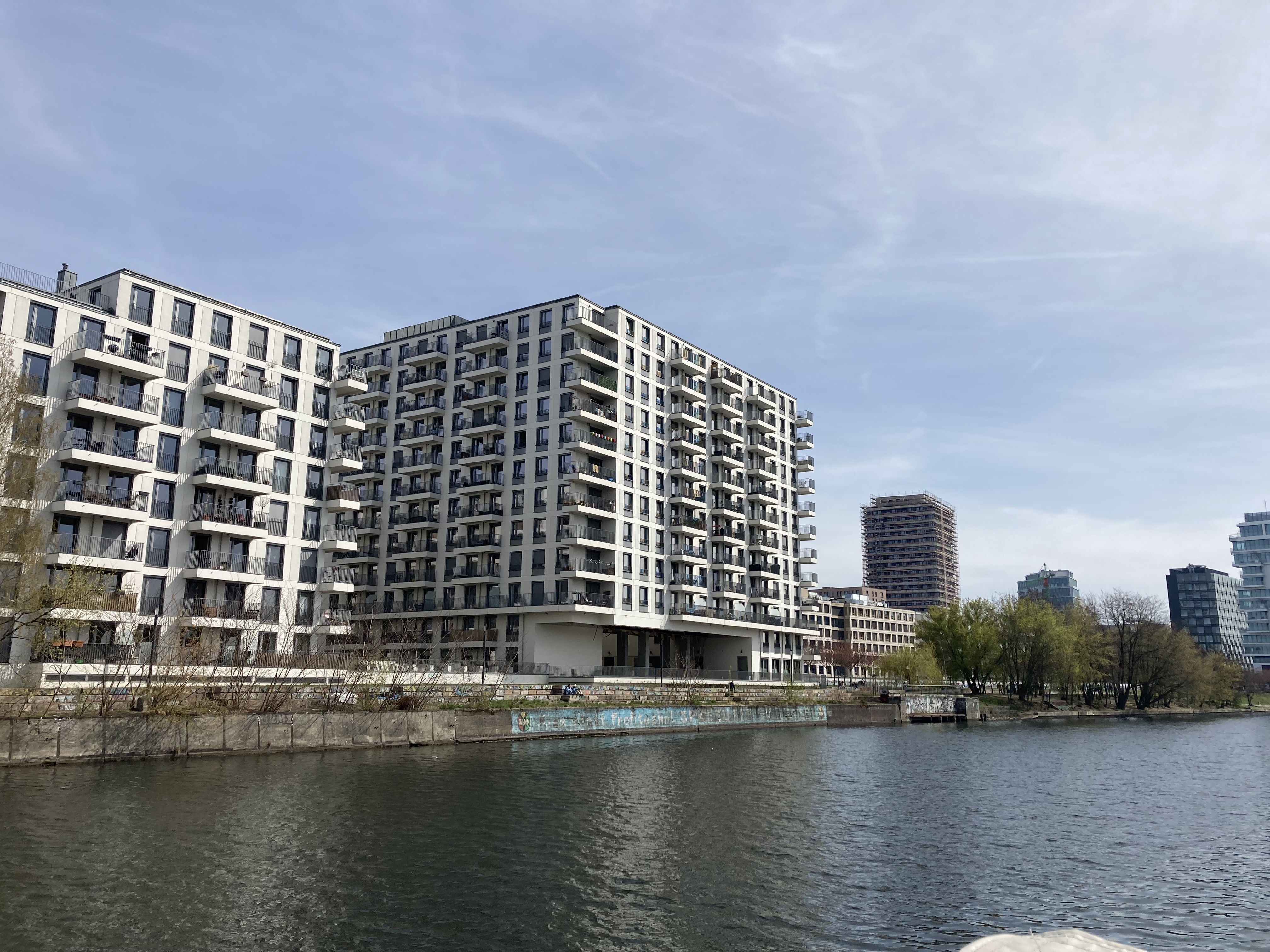 View of the East side gallery in the distance 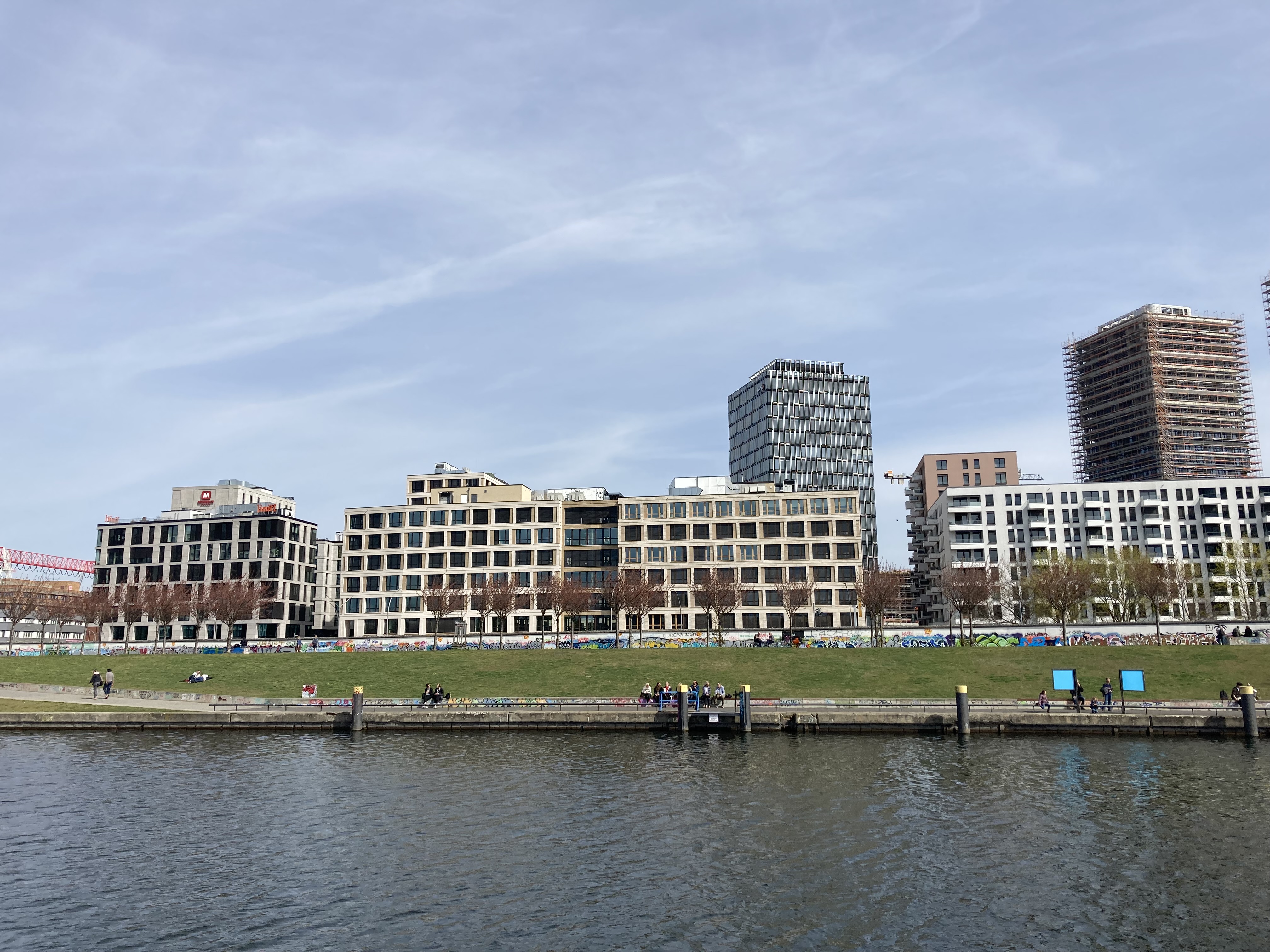 Maybe you have already recognized it on this picture, even if it was not chosen as the main motif and does not jump directly into the eye: The East side gallery! In some distance we passed it by boat, and even if some distance was between us, it also looks fascinating from the water. 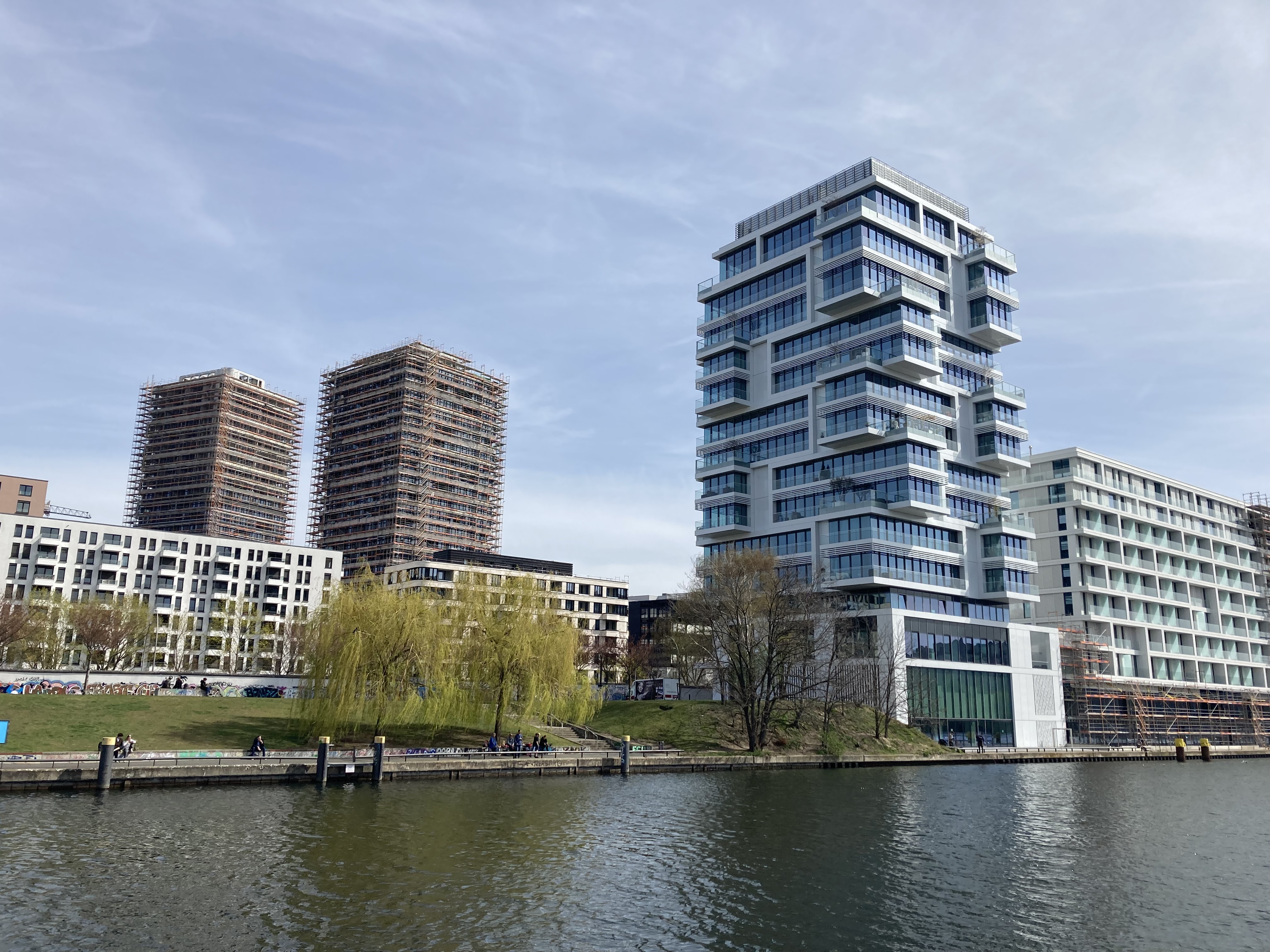 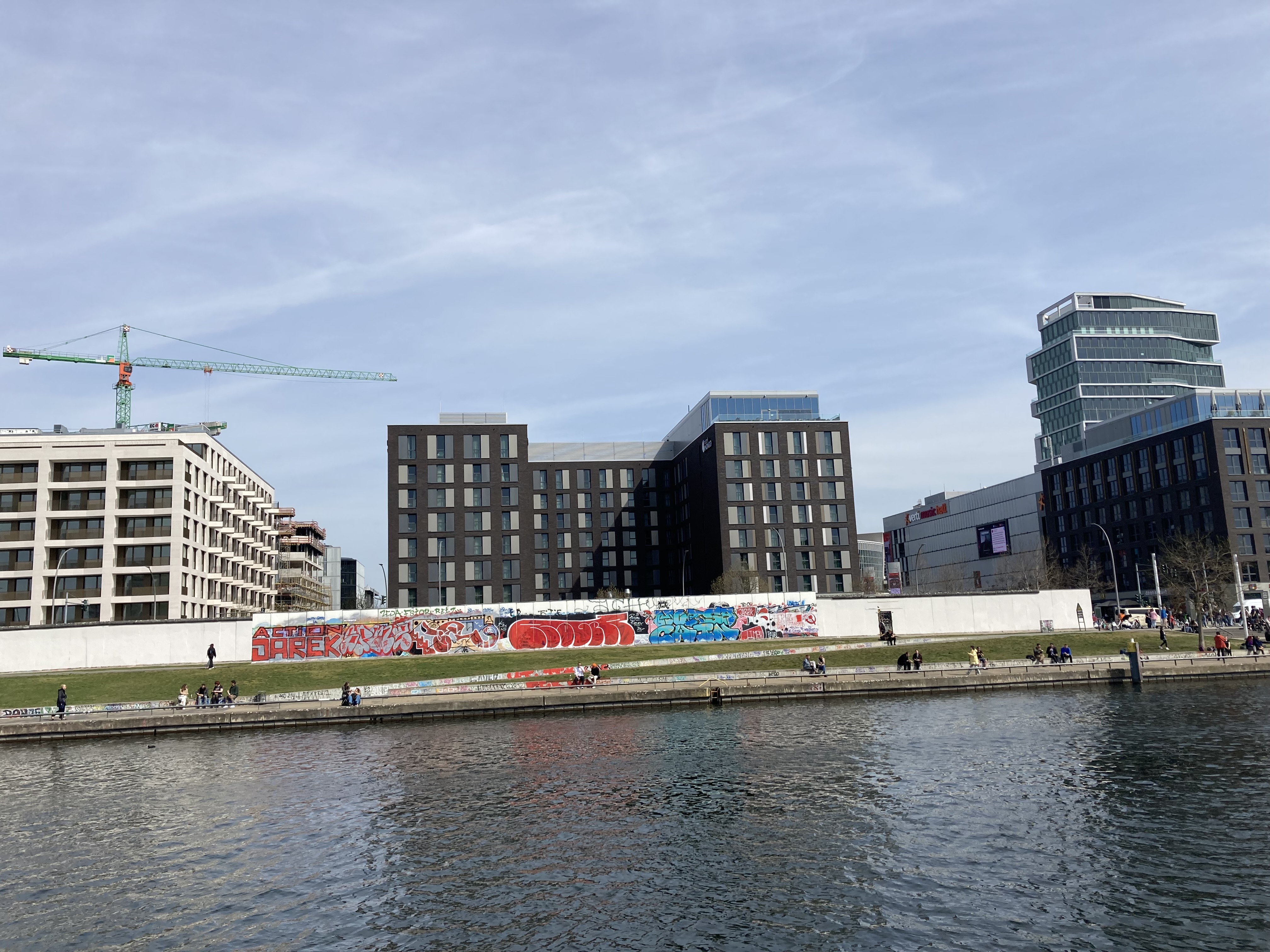 A popular photo motif: The Oberbaumbrücke and its history 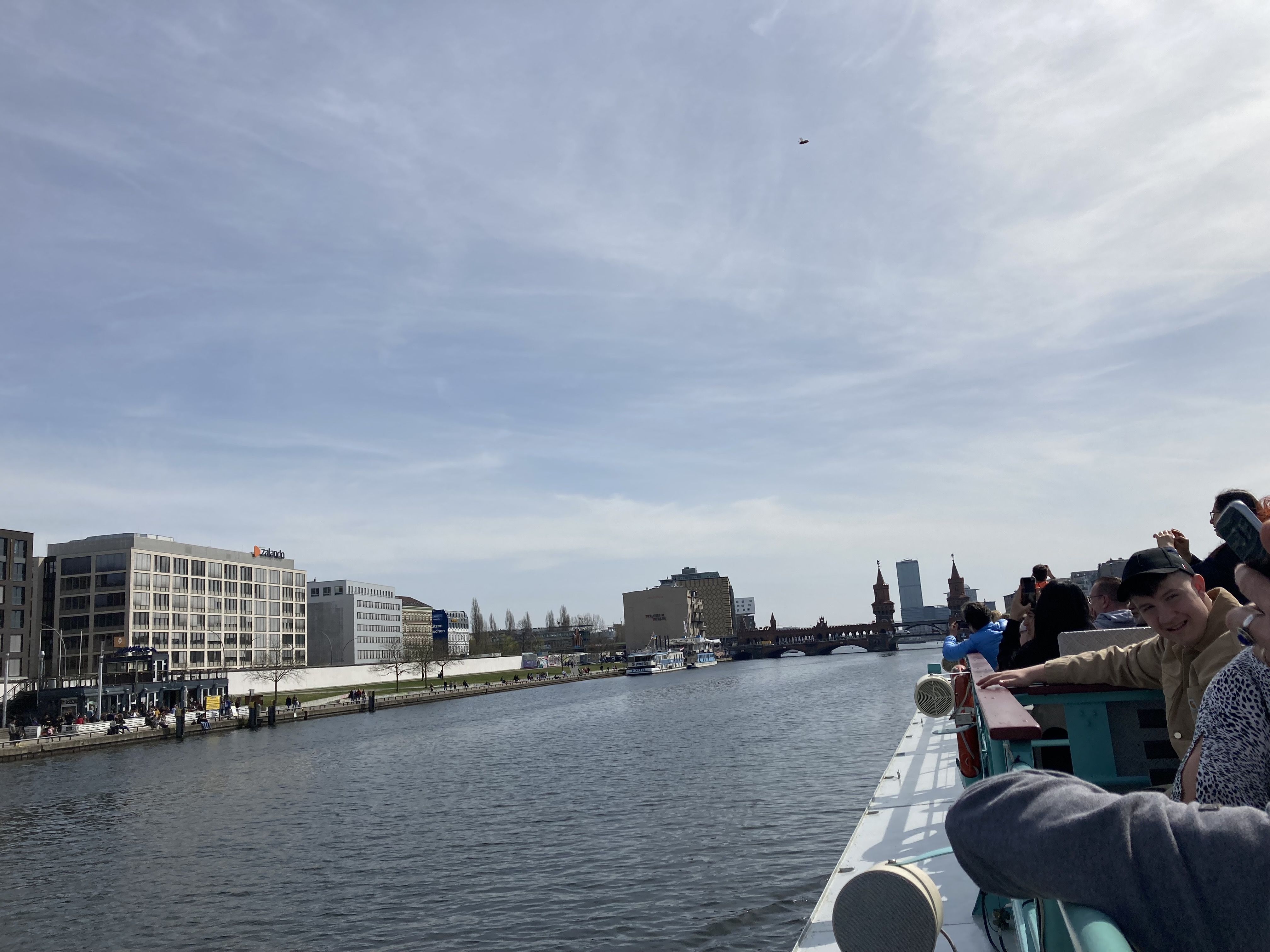 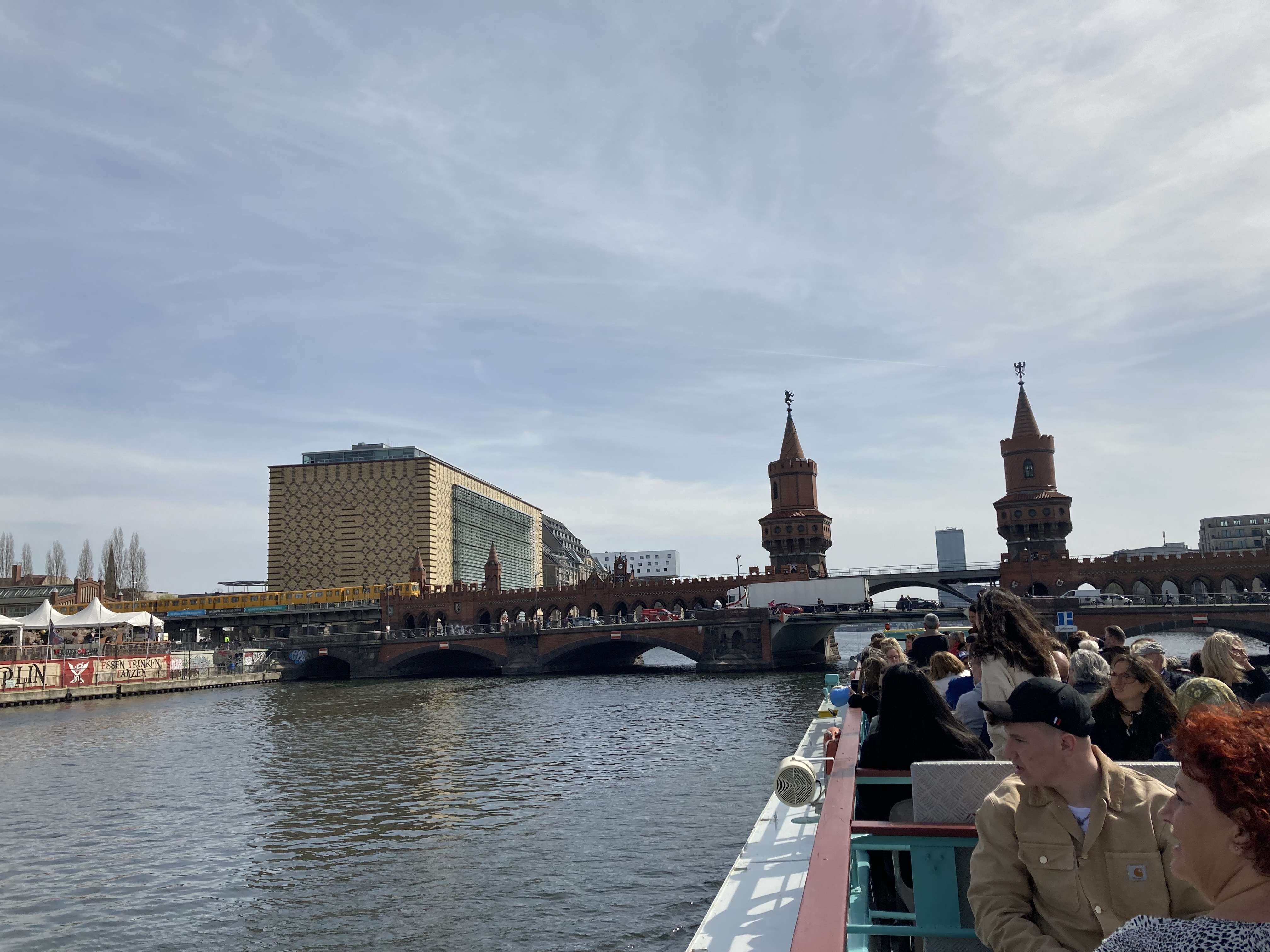 But my personal highlight of the trip was the ride under the Oberbaumbrücke! It is one of the most impressive bridges in the capital and connects the districts of Friedrichshain and Kreuzberg over the Spree since 1896. It got its name from the fact that the Oberbaum was once located on this bridge, where customs duties were collected. Not only cars and buses cross it, but also almost the oldest subway line of Berlin. I tried to capture the bridge with the train on a photo and I was lucky:) The supporting structure for the tracks was even decorated with jewelry and the structure looks so very unique. 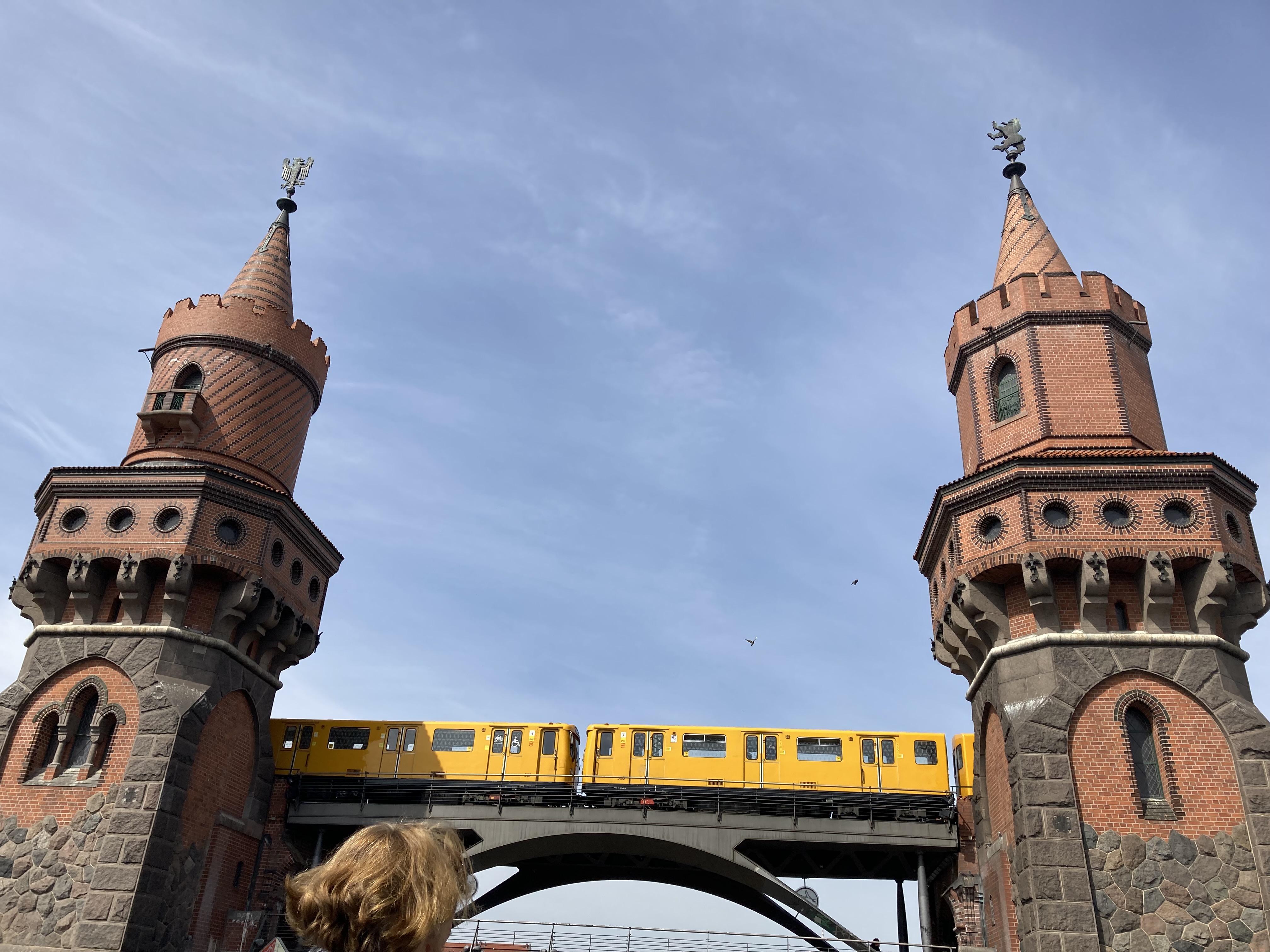 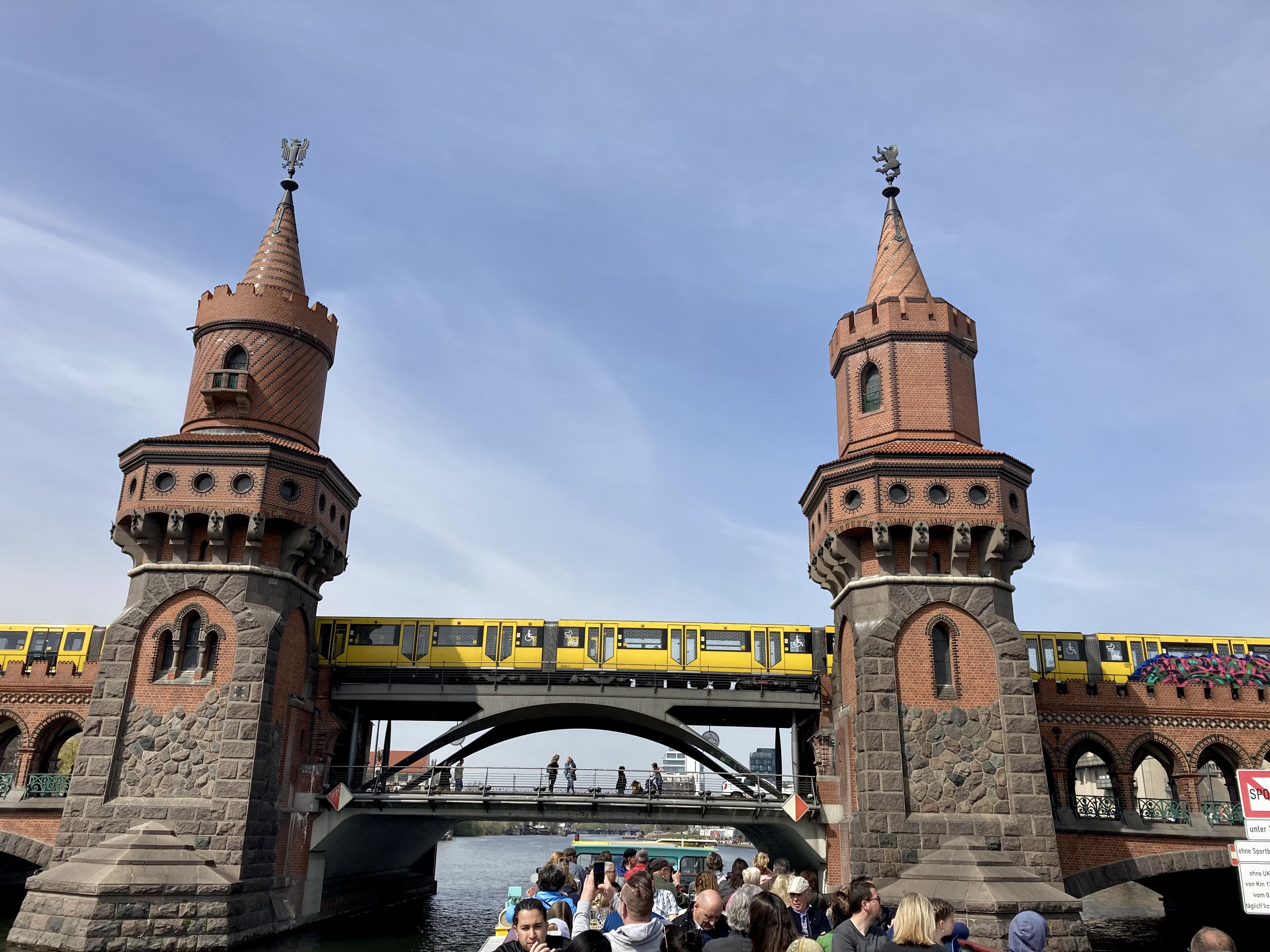 Here you can see how well attended our boat was- no wonder, with this beautiful weather :) 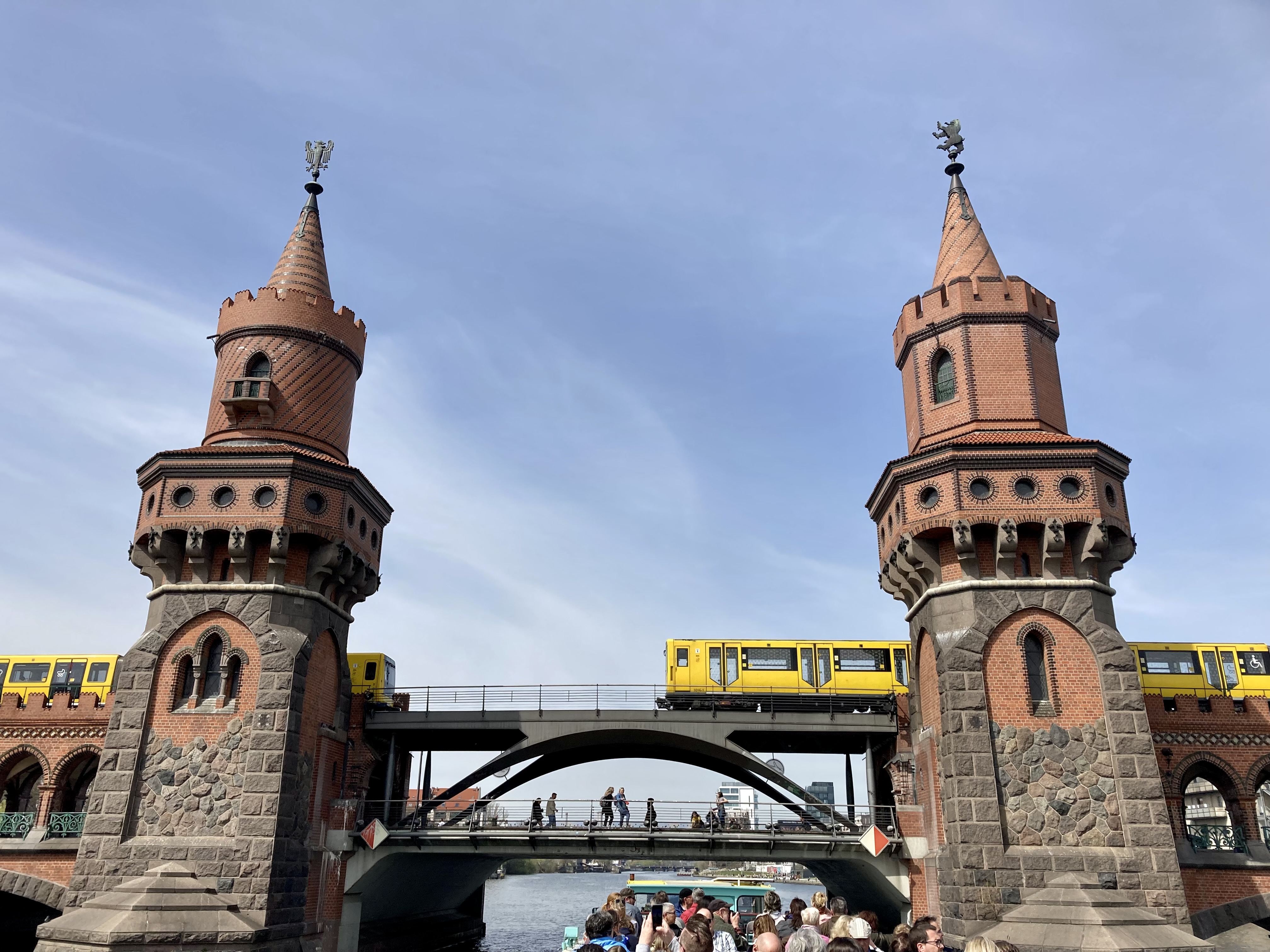 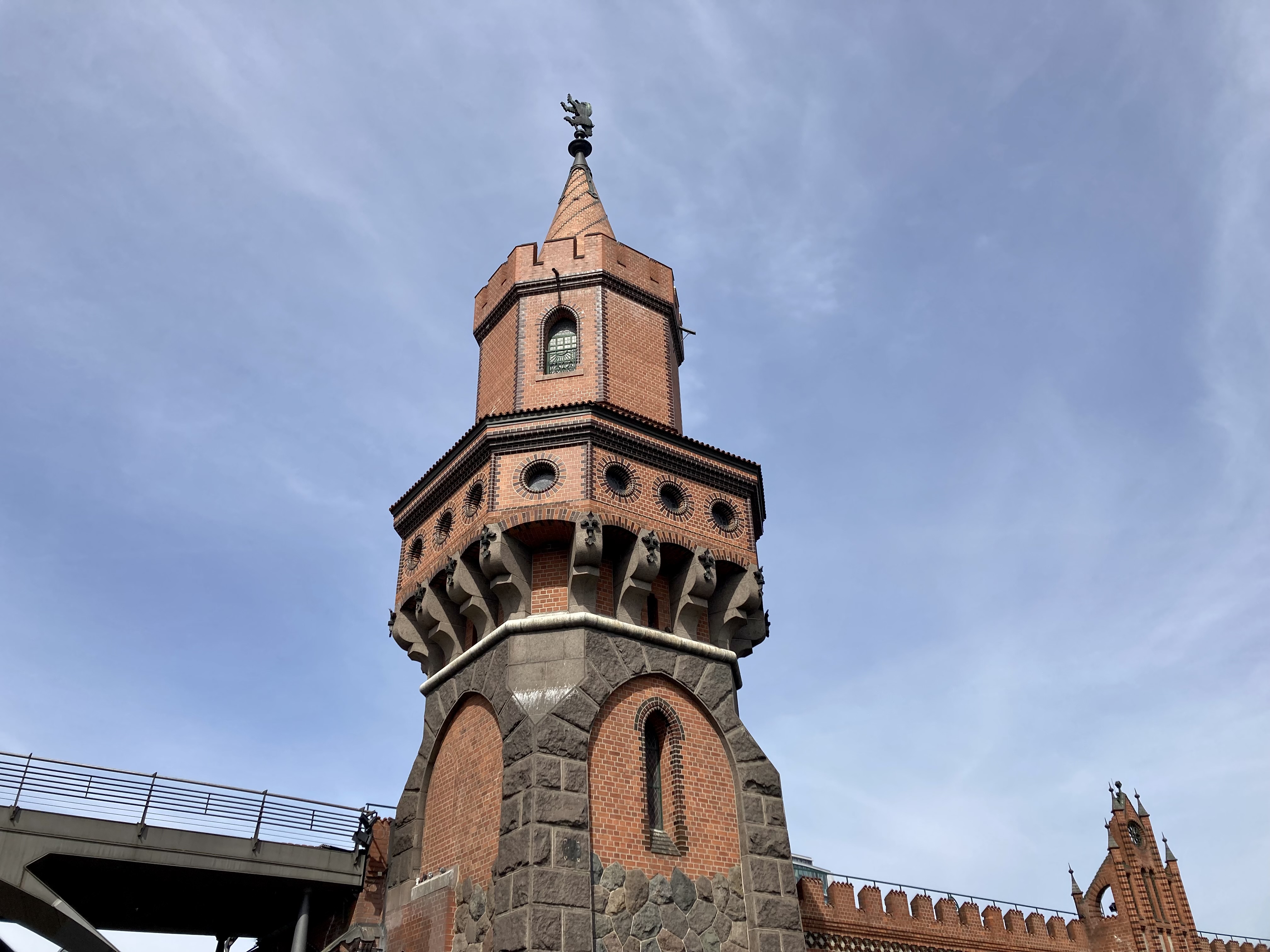 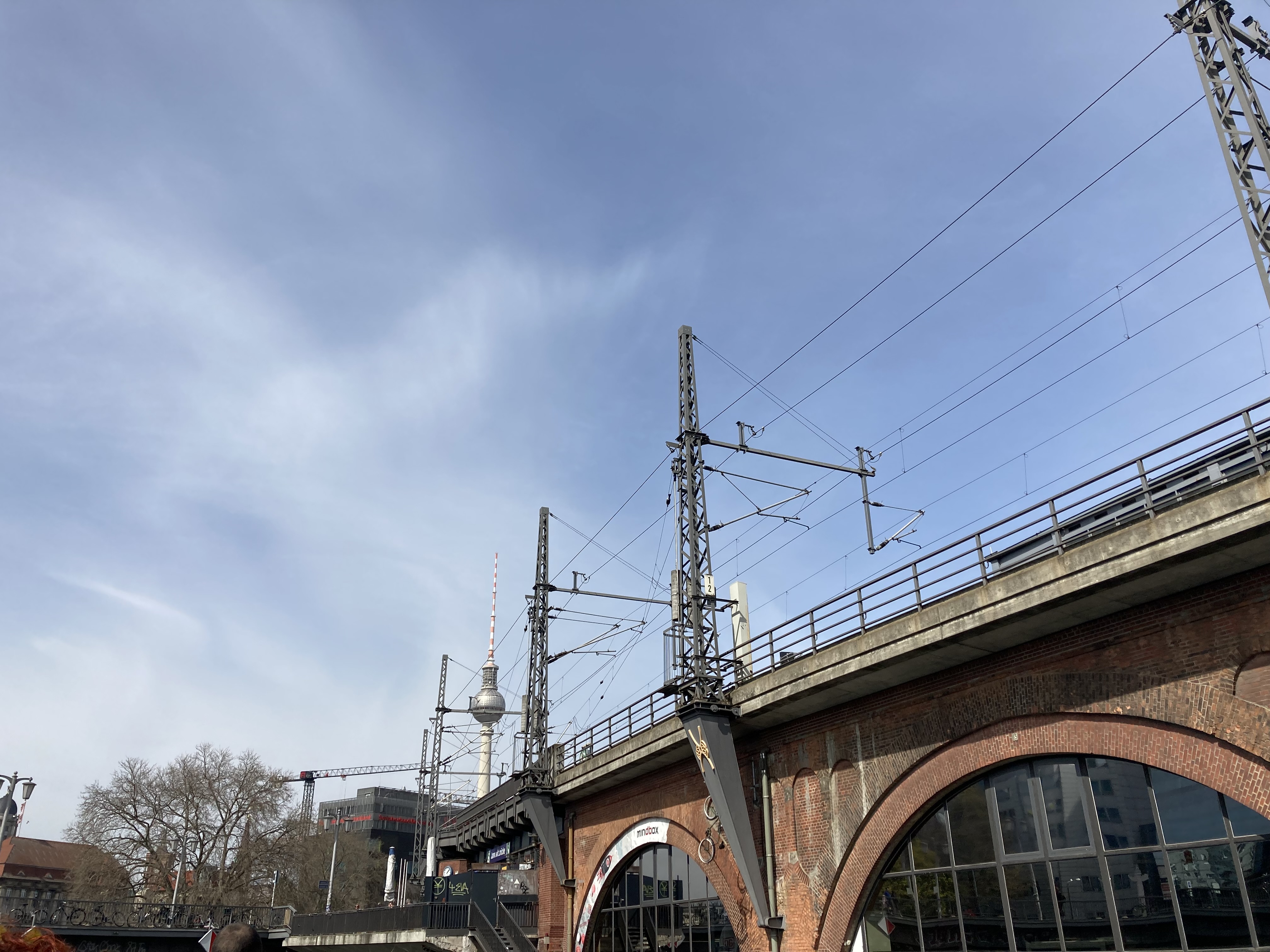 And once again "hides" the TV tower in the background haha:D 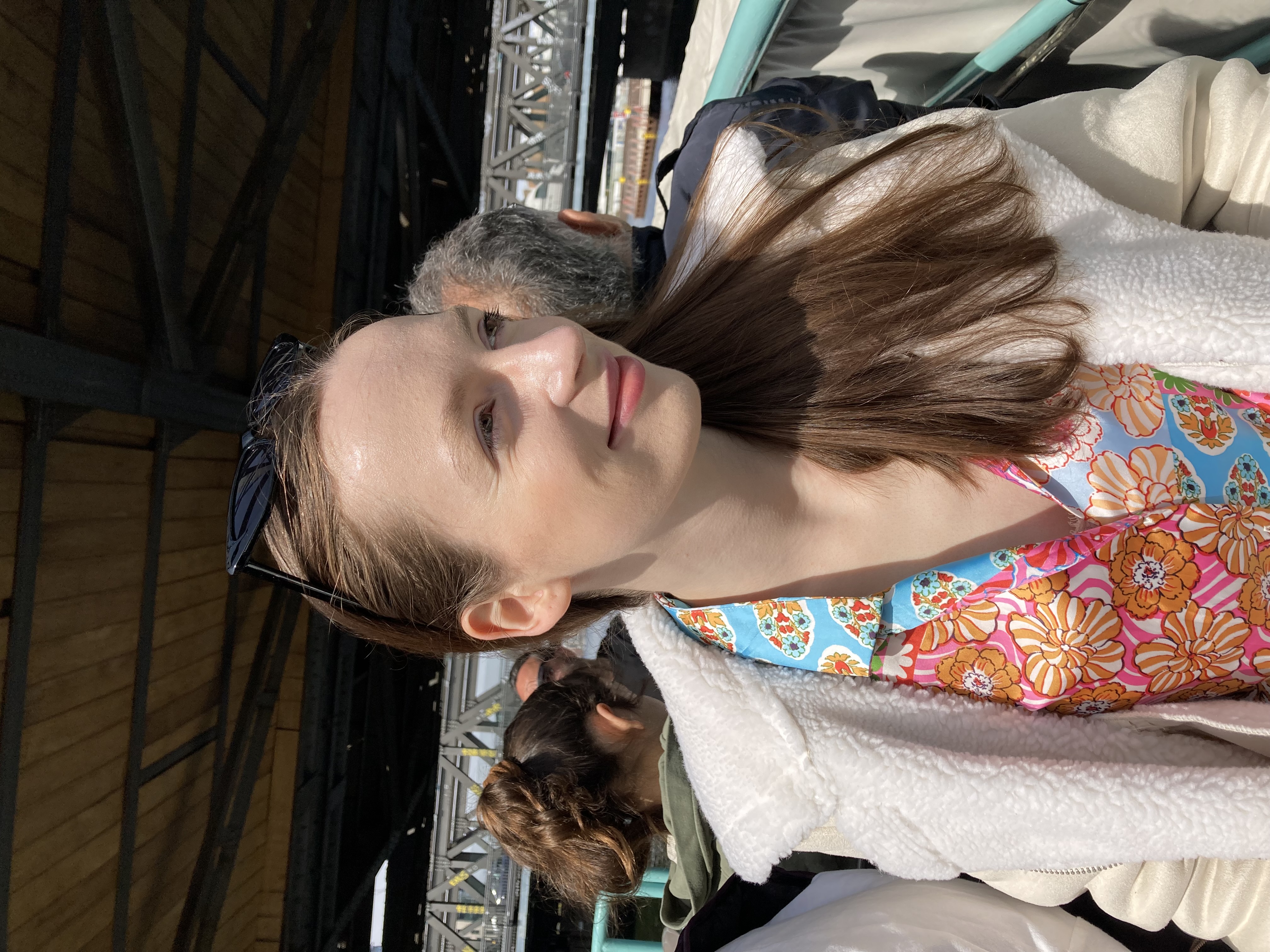 But in this post I didn't show you all the beautiful places we saw on the boat tour, there were just too many. Be curious, in the next post I will show you the Reichstag and the Molecule man:)

Have you ever been to Berlin? If so, what were your personal favorites and do you have any tips for places that are not so well known?
The days in Berlin went by way too fast and for the relaxation it was really good to take a little vacation again.
I hope you have a great day!

Thank you so much for you work and support!:)

I'm glad I could see pictures of an area of Berlin I didn't know about, I mean I knew the very touristy areas, like Checkpoint Charlie, Brandenburg Gate, Berlin Wall.....
A way to spend a relaxing afternoon.
I know it's a bit late, but I wish you a belated Happy Easter :)

Thank you very much, I wish you the same! That's right, we even went to those places, I wanted to write about that in the next posts. Thanks for looking! :)

I look forward to your posts from Berlin's very touristy areas:)

Not sure if I'm more impressed by the bridge's age or the fact that it survived during ww2's heavy bombardments.

haha difficult decision for sure;)!

One of my dream places! ♥️ I am so happy to see Berlin’s landmark. It made my day, indeed. Thank you!

its really beautiful there:) thanks a lot for your comment!

Hiya, @ybanezkim26 here, just swinging by to let you know that this post made it into our Honorable Mentions in Daily Travel Digest #1532.

That's an excellent way to explore the city and admire its waterfront architecture, by boat. Are the trains in Berlin all yellow? The color is perfect and adds a pop of cheer to the modern and historical buildings.

yeah, especially if you don't have too much time, you can see a lot by taking a boat tour and you also get a lot of knowledge about the sights :) yes, the trains are yellow or often yellow-red, it's a tradition, thats true!!

Absolutely agree > the Oberbaumbrücke is the most impressive bridge we got in Berlin.
Thanx for sharing your experience with us. See you around town.

I'm glad that I get such nice feedback from a Berliner;) thanks for commenting!

Very cool photos! You were very lucky with the weather. 😎
When I visited Berlin the skies were cloudy and dark... and my photos came out horribly!

yeah absolutely we picked the right day, the day after it was so rainy haha. oh no thats sad, yeah i think berlin is known for its not so consistent sunny weather;)

Thank you for sharing another wonderful story with us! Congrats for the Honorable Mention!

I love Berlin. Your photography and article are first class! ❤️
Lovely presentation, I enjoyed a lot.

I never been in Berlin, i really have to visit this city! Thanks for sharing :)