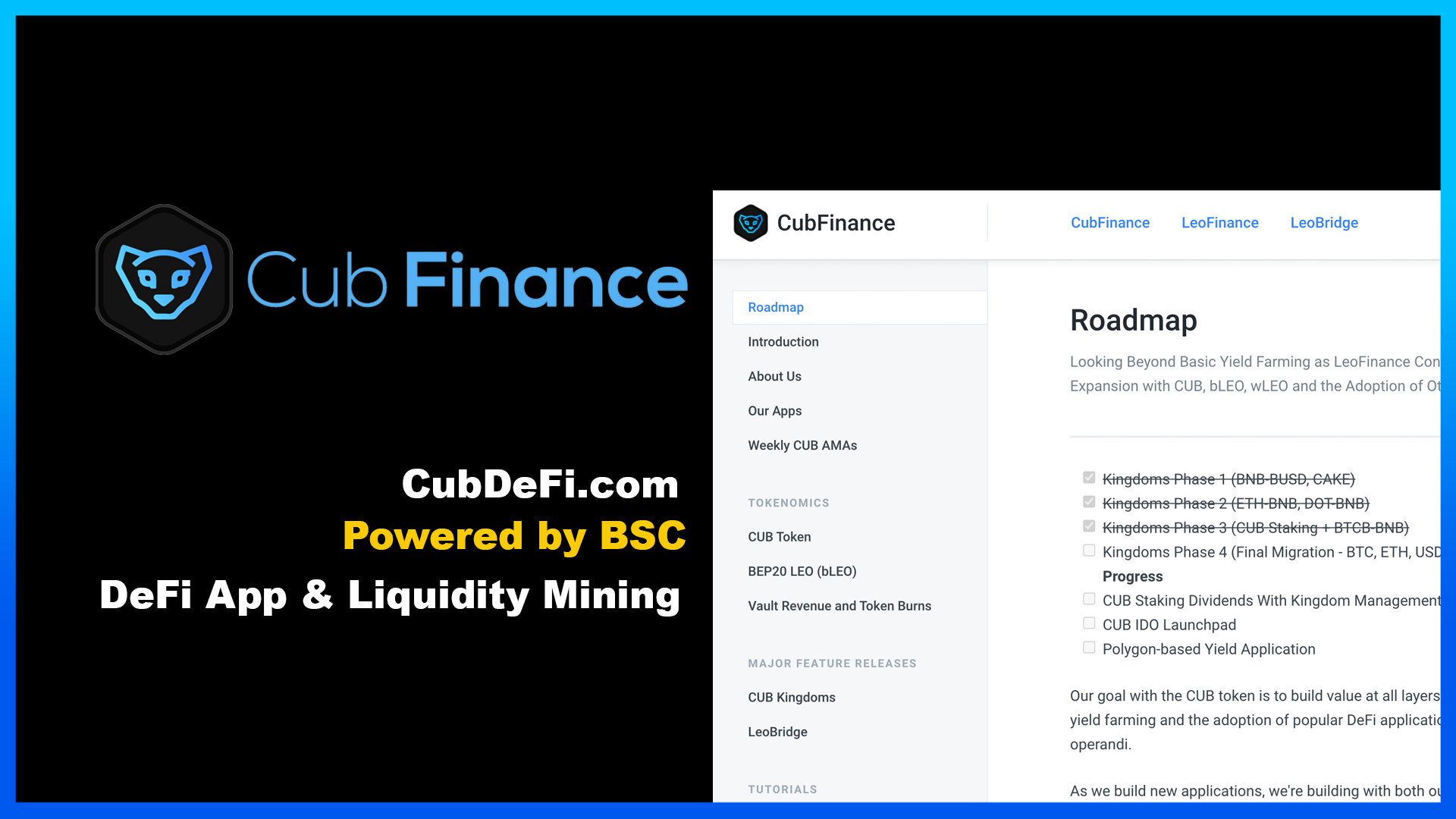 Our goal with the CUB token is to build value at all layers. We see sustainable yield farming and the adoption of other popular DeFi applications as our modus operandi.

As we build new applications, we're building with both our existing Leo/Cub userbase and with the broader DeFi market in mind. The entire foundation of everything we build is rooted in the idea of growing our core community in depth and width while bringing value to the CUB token.

When you look to the track record of the entire LeoFinance project, you'll see our mode of operation: build and launch quickly. Follow up with rapid and relentless iteration to add new features.

You can view the updated roadmap in this post or view the revised version of the CUB Docs.

The Kingdoms rollout has taken a large percentage of our total dev time over the past several weeks. We've essentially rebuilt the entire CUB ecosystem from the ground up - while many platforms like Apeswap chose to launch a separate platform and token in order to migrate from "Goose" style farming to "Autofarm" style farming, we chose to build the feature directly into the existing CUB platform.

For better or worse, this caused a number of compatibility upgrades to be undertaken. We also had to adapt the UI from the ground up, commingle our contracts and of course: test thoroughly.

While many have grown impatient with the development and launch process of Kingdoms, many other see the immense value that Kingdoms bring to CUB. This will essentially "relaunch" CUB to where it needs to be.

Kingdoms inflation is far lower than standard Farms/Dens. We've talked about this in prior PRs this week.

Kingdoms Phase 4 is the final rollout of the initial Kingdoms migration. This marks the release of 3 new Kingdoms vaults:

In addition to the introduction of 3 new Kingdoms, we're also deprecating 4 of the old Farms/Dens:

Our target launch date for the Kingdoms Phase 4 rollout is in the next 24-48 hours as we finalize the UI. Stay tuned to Discord, Telegram and Twitter for real-time updates as we prepare to roll out the 3 new Kingdoms.

Every time our smart contract collects CAKE Rewards, it takes 3% of these rewards and converts it to BNB. That BNB is then distributed to a separate smart contract from which CUB Kingdom stakers can claim a proportional share of the 3% liquid BNB dividend rewards.

This feature is expected to roll out within the next few days-week (shortly after the release of Phase 4 Kingdoms).

We'll also release a UI update to handle the claiming of these rewards from the Kingdoms and Homepage of https://cubdefi.com.

Later in "The Week of CUB" schedule, we have a planned PR to discuss the next major feature we're building for CUB after the Kingdoms release: the CUB IDO Launchpad.

This launchpad hasn't been discussed in great detail yet and the lengthiest description so far can be watched in the most recent LEO Roundtable Podcast that we recorded.

The first IDO to go live will be the new token & application we're launching on Polygon. In a nutshell, CUB holders will have the first crack at trading the new token via an IDO sale.

For example, if $1m in CUB is traded for "Token X" then $1m in CUB is burned permanently from the circulating supply. At current prices, that's nearly 50% of all CUB in existence.

This launchpad infrastructure we're building is not just for 1 token launch. Our goal is to make regular use of CUB's IDO Launchpad and bring on smaller cap tokens to help launch and raise via the launchpad.

The launchpad will only ever accept CUB for the IDO process. This means that CUB will gain a brand new utility as the only trading vehicle for brand new tokens that are about to launch. CUB Hodlers get first crack at everything that goes through the launchpad and non-CUB hodlers will need to buy CUB on the open market in order to trade it for the IDO token.

Our Polygon-based yield app will launch in the near future. As mentioned above, it will launch via a CUB Launchpad IDO where 100% of the CUB traded for "Token X" will be burned.

Users will be able to trade CUB for "Token X" at presale prices. The CUB traded will get burned permanently from the supply while "Token X" will land back in the user's same wallet address but on the Polygon blockchain.

This app works quite differently than CUB. It involves various autocompounding, staking and lockup features that bring rock solid tokenomics and combine it with DeFi liquidity mining concepts. We'll introduce this app and give more details on how it will work in "The Week of CUB". 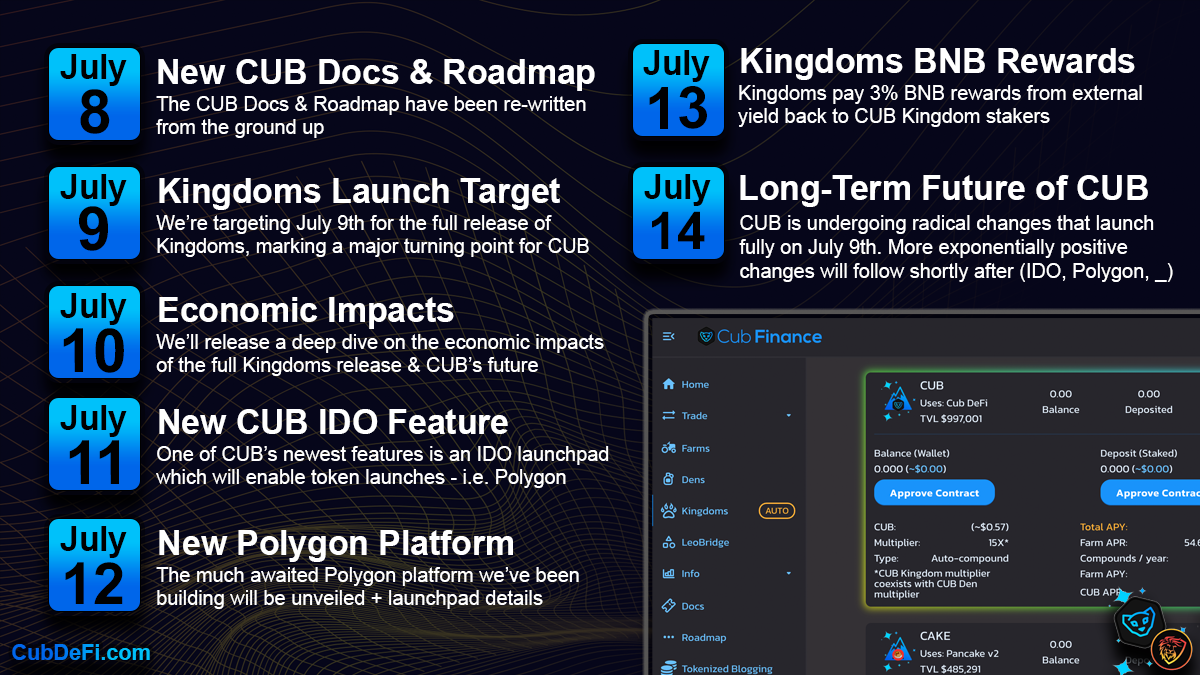 Excitement for the Future of CUB 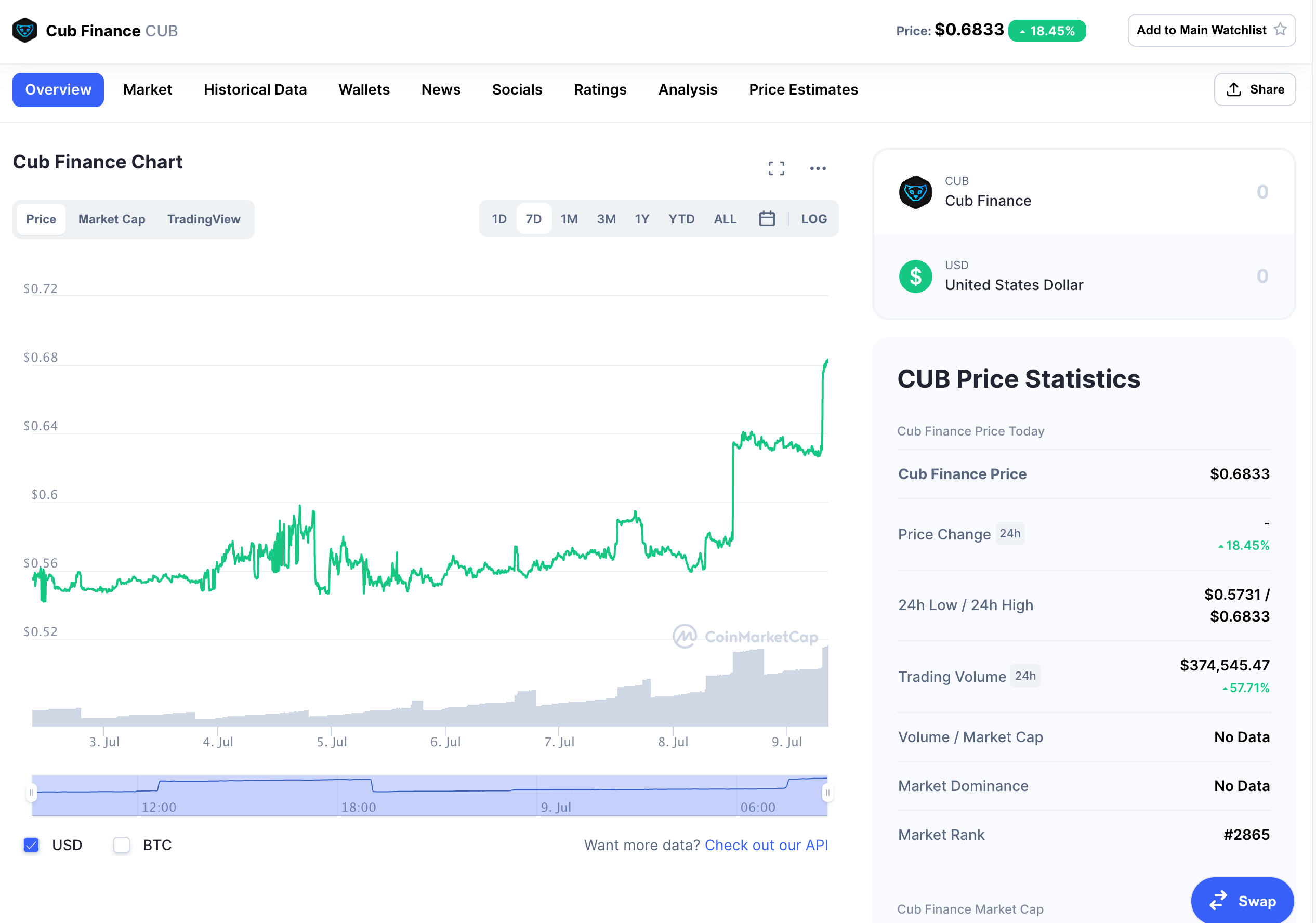 There's already been a great deal of chatter and excitement about the revamped roadmap, rollout of Kingdoms and the new IDO Launchpad feature. We discussed some of these developments on the podcast yesterday and many of you enjoyed the episode. The CUB price has shown similar life being pumped back in.

There is so much yet to come for the CUB Token, LEO Token and our entire LeoFinance family and community. The Kingdoms rollout marks the release of some of the most difficult development we've undertaken but the true value of Kingdoms will come when the final 4 vaults are deprecated and the 3 new Kingdoms vaults go live. All culminating with the doubling of rewards for the CUB Staking Kingdom + BNB Dividend Faucet being turned on.

Wen $5 dolla CUB is back in our line of sight 🎯

The launchpad will only ever accept CUB for the IDO process. This means that CUB will gain a brand new utility as the only trading vehicle for brand new tokens that are about to launch.

This is huge. Developing a use case for #CUB and expanding #Cubfinance is enormous. We can see it growing things a great deal.

All of this is going to feed into #Leofinance big time. We will see a lot more people rolling in down the road.

Agree that this additional functionality is very helpful.

CUB is awesome because it feels like the slower played thought out game will come out the winner.

Literally you are moving faster than many other blockchains seeking to join blockchains together. Amazing! I'm stacking CUB!

Amazing steps taken in the right direction and in such a short time. And on top of that I love that you keep on hunting the new things and I think Polygon will make a huge difference. Glad I got on this project from the beginning and looking for when CUB will get over $1 once again...

What happpens with funds in the e.g. BTC den? Will they be migrated to the Kingdoms automatically?

If I understood it correctly, you will find them under 'inactive' in dens. From there you can migrate them as you like.

Is there any chance that the CUB to new token can be placed into a different metamask poly wallet as I had to set up another metamask as I couldn't get BSC and Poly running on the same one.

You can have a different wallet for each, there's nothing wrong with that.
But technically you can use one address for both, you just have to switch nets.

Ah ok, awesome. I interpreted what was written wrong

Well that's nothing short of epic.

If we can trade in some CUB for the presale tokens, then it will definitely be interesting. I could just use some of my CUBs earned from the farms to get in on the Polygon version when it releases.

Super pumped about the mechanics of the IDO and the fact it burns CUB, epic!

Hmm again so much cool things happen at the same time :)

For me the best is the feeling that CUB is the "People's defi".

Anyone can trade a few hive or leo and get some Cub, put them in the Den, and watch as the world burns. Heck, you can even buy CUBLIFE tokens and do others earn for you and get weekly payments in LEO in your wallet...

Ok I missed CUBLIFE gotta check that out :)

The launchpad will only ever accept CUB for the IDO process. This means that CUB will gain a brand new utility as the only trading vehicle for brand new tokens that are about to launch. CUB Hodlers get first crack at everything that goes through the launchpad and non-CUB hodlers will need to buy CUB on the open market in order to trade it for the IDO token.

This is very cool. More utility for CUB is definitely the right direction!

Does the CUB used in the IDO go to the company launching the token (i.e. the CUB is the funds they are raising through the IDO)? Won't they need to sell this CUB to finance their business?

I've seen other IDOs where the launchpad coin (i.e. CUB) gives the right to purchase the IDO token, but in another currency, e.g. USDT. This could bring buy pressure for CUB without the sell pressure described above.

This is a good week!

Is it bad I feel almost hurt whenever I see CUB price go up? The tiny bits I buy and put in Kingdom isn't satisfying. CUB is so undervalued right now. If I owned a house I'm pretty sure I would have financed it to buy CUB & few other Hive investments.

CUB is a legend in making! Mark these words!

Jesus loves you too!