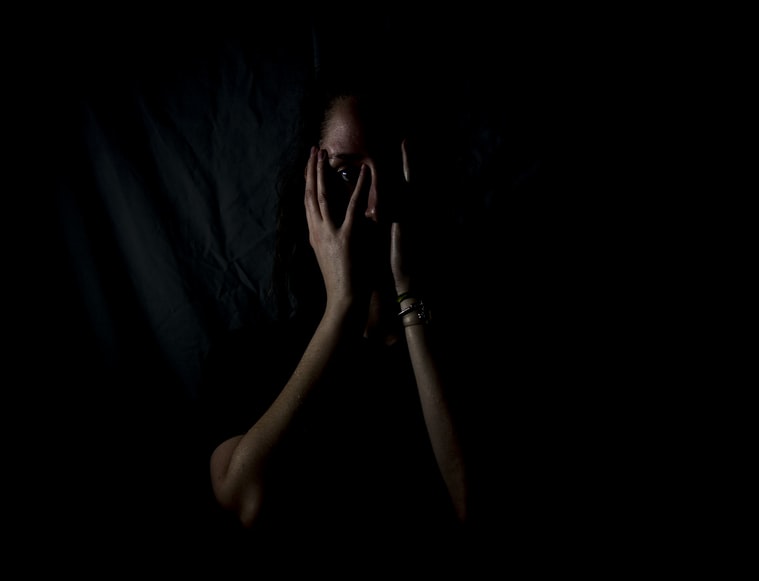 They say, "For every night, there is a brighter day." But first, you need to survive the night.

"Get in before the door closes…."

Juliet could feel the night closing in. She pushed the brown curtains back gently, peeking through to look out at the darkening sky and its stars. A chill ran through her despite the warmth of the house. She wrapped her arms around herself, letting the curtains fall back, as they blocked the view of the outside, which she wanted. She shivered, thinking they were the only protection, other than a thin pane of glass, from…. From whatever it was in that field across the dirt road.

Juliet shivered again, turning her back to the window, that field was filled with eerie sounds, tall rustling wheat stalks, and fierce winds. It always seemed to her everything was just more…. In that wheat stalk field. The wheat stalks were taller, the wind was stronger, and the creepiness was at its maximum.

"Get in before the door closes." A strange voice echoed from the field into her house. The fear in Juliet's heart grew with each day as the month came to a close, every day, her frightened nerves were on edge. She was alert and cautious with everything she did. It would soon come for her, whatever was in that field, knew she was powerless to stop it. The thought of her demise constantly ran through her head. How would it happen? What would strip her life from her? What kind of monster would she see? She had turned her head to her bedroom window, facing the field, and saw….something. There was something in that field.

In the light of day, Juliet thought she had just been hallucinating, maybe her mind was playing tricks on her. But every day, as the sun came down in the west and night drew close, the fear would take her over. She'd spent many restless, sleepless nights in the last five weeks unable to think about anything but what was coming for her.

"Get in before the door closes…."

The phrase swam through her mind constantly throughout the day. It was almost audible, it was said so clearly and loudly in her mind, that she questioned once or twice whether she'd heard it with her ears. But there was no one speaking to her. No one was around her when she heard it or even after.

Not that she was around people often, she lived alone. Alone in a house with a big field, holed up in her studio to draw her cartoons. Her popular comic arts had been sold nationwide and were only getting bigger. She didn't rely on anyone else but the career she'd chosen isolated her from the world and friends, other than Stephen. He was always there when she needed him.

But she didn't want to bother him with her troubles. His active life didn't stop him from checking in on her, and that made her feel happy to hear his voice. Still, Juliet wanted more from him. She was the definition of a lonely artist. She often wondered if Van Timmy, a horror writer felt the way she did perhaps that was why he cut off his ear. Maybe it was fear of the unknown. Something coming for him like what is coming for her. She wanted to turn the Tv on, but she really should be in the studio, drawing a painting about African women's liberty.

She was behind on her work. The zeal to draw wasn't there any longer, she was too tense. She felt strange as if some kind of pressure pulse was emanating from the field across the way, but she dared not step in the way and go into that field. Why would she? She didn't even know who the field belongs to, as she had never seen anyone in it because she doesn't care. Juliet sat on the brown couch turning her eyes toward the cell phone sitting on the coffee table in front of her, as she thought about who she could call, still wasn't sure if Stephen could come over. Suddenly, she heard the voice.

"Get in before the door closes…"

Juliet turned her head and looked toward the front of the house. She ran her eyes over the window, toward the kitchen to the front door then to the other window at her left the one she'd been peeking through.

"There's nothing to be afraid of." She said to herself assuring herself that nothing was out there coming to get her. But still, she reviewed the field in her mind's eyes. She hadn't seen anything. Now, she thought of having Stephen around her, so she went back to the coffee table and picked up her cell phone. She unlocked it and searched for Stephen in her contact list.

"Hey, what are you doing tonight?" She asked

"Hello sweetie. I am doing nothing. Are you bored? I can come over." He chuckled.

"Yes, please come, I am so bored that I am going to count the ceiling tiles." She didn't tell him about her recent fear of the field.

Julie marched over to the window and sat on the couch right in front of it, happy to see Stephen soon. Her hand reached forward, and she was about to push aside the curtain when she heard that phrase blast so loudly through the house without her window shaking. "Get in before the door closes." she jumped and squeaked in surprise. Now she thought of how Stephen would get past the field.

She narrowed her eyes, noticing a shape… not just rippling wheat stalks bundled together. It was a solid shadow shape with red glowing eyes. Whatever it was, it had it back to her. She was caught in a grip of fear, her throat closed, and couldn't breathe but she still kept staring at the shape. It wasn't moving.

Soon the car lights in the distance swept the land in front of her. Her breathing quickened. Her eyes darted back to the solid shape in the wheat field. It had turned around. It was watching the car pull up in front of the house. Stephen didn't think anything of it, he hopped out of his car, happy to spend the night with Juliet, and fumbled with his keys, as he jogged towards the house, walking into the field.

Juliet closed the distance between herself and the door as quickly as she could. Suddenly, the thought ran through her mind that if she opened the door, that monster would come for her. But still, she ignored it. After all, it was already coming for her. She broke the door handle, ran outside, and shouted Stephens's name.

Suddenly, a wild wind blew her inside the house and shut the door.

"Get in before the door closes… Close the door!"

As an unknown bright shining light consumed Stephen and the field.

Juliet tries breaking the window, peeking to see what has Stephen emerged into? Is the monster gone? Where's Stephen?

Thanks so much for posting your short stories in The Inkwell.

I do wish that we had found out what happened to Juliet, this story had an excellent build-up, but the end left the reader guessing. Did she ever see Stephen again? Did she escape the house?

Please keep the community strong by engaging with other authors.

Sure, i do engage and i'll continue to support other writers in the community and on HIVE.

THANK YOU FOR YOUR SUPPORT ❤❤

This was gripping! Have you ever thought about writing a suspense novel??? What an excellent start if you do 🙌

Yes, i do have and already have one in progress.

Wow well you've certainly got me intrigued and a little goosebumpy...

Congratulations @ubani1! You have completed the following achievement on the Hive blockchain and have been rewarded with new badge(s):

Hi @ubani1, your post has been upvoted by @bdcommunity courtesy of @rem-steem!

Congratulations, @ubani1! Your story has been chosen for the weekly #theinkwell magazine and has received a vote from Curie. Please keep supporting the community by commenting on other writers' stories.

This is really intriguing. Was it premonition, the voice in her head? Was there truly a monster in the field or was it that she should be afraid of Stephen? Where is Stephen? I love it, and I'm anxious for more!

There was a monster in the field 🙃🙃