Most colorful spider ever

If you are a spider lover like me, then this is a critter you don't want to miss. Meet Chrysilla volupe, truly a sight to behold: 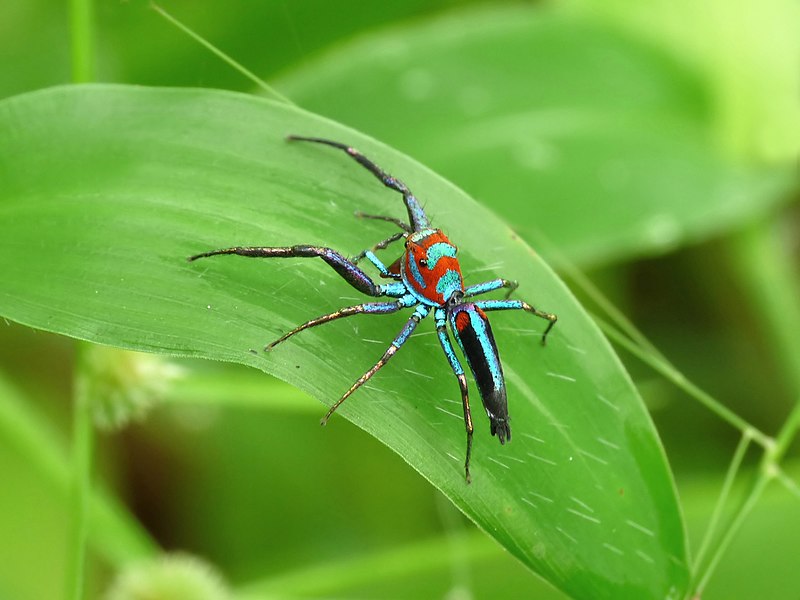 Chrysilla volupe is a jumping spider that occirs in several countries in South Asia, including Sri Lanka, India, Nepal, and Bhutan.

Male individuals are quite small, measuring in at only 5.44 mm long and 1.76 mm and have a carapace in reddish orange color with two iridescent blue stripes.

On the other hand, females of the species are even smaller, measuring 2.61 mm long and 0.88 mm wide, featuring a greyish carapace with grey eyebrows, and all of their legs are yellow in color.

Interestingly, females were described 139 years after the species was first described by Karsch in 1879. Until 2018, only males had been identified and described. Which makes sense considering how small they are. And females are even smaller, with earthly colors so probably invisible to the naked eye, especially when blending with their natural environment!

The Amazing Spiderman 🕸️ is real... Interesting facts and the way colours are seen differently from different angles is truly insane .

Wow! The colors are vivid, a wonderful creature to behold. A magnifying glass will help in seeing them more clearly ;).

Beautiful to watch, full of color's , but in the video it also scared me the way he was moving.
Different colors makes it unique and different from other spiders available. nature as it's best.

The best spider is a dead spider

Bright spider. Mother Nature dressed him up in such an unusual outfit.

I love spiders. This one has amazing colors. This has inspired me to ask the AI to create some spider images for me. The jumping spider jumped through a rainbow 😂😂😂

no chat gbt ? I feel robbed

That is a wicked cool looking spider. I don’t know how you find this stuff…..

Is that female a cannibal like black widow? Then you shouldn't go near them, shhussh.. 🤣

Pretty! even a bite will be beautiful 🤣
!1UP

Is it as dangerous as it is colourful