Here is part two of mushrooms in the hand from 2021 for this #fungifriday by @ewkaw part 1 is here. This is a larger less dried out one. In theory these are edible but they aren't eaten because they melt into almost nothing if you try and cook them. Here is a strange polypore that I picked in early spring when there were no fresh mushrooms out. I just picked it to see if it had any interesting pore patterns but instead it looks like a typical artist conk polypore. I'm not exactly sure what polypore this is but it reminds me of
Polyporus brumalis. Sadly this is not edible just because it is so tough and spongy. Here is a strange looking amanita. I thought it might be Amanita bisporigera aka the destroying angel but I don't see the typical veil around the top of the stem... Typically white mushrooms like this with long stems and a bulb going into the ground should be avoided since those are the features of the deadly destroying angels or deathcaps. Some people think that even touching them is deadly but this is not true. After handling them I just wash my hands in dirt in the forest to rub off any particles from the cap. Here are some tiny cute little mushrooms. The closest thing that resembles them is Marasmius Ramealis aka twig mushroom. I suspect they might be something different as their stems are very straight compared to Marasmius Ramealis. Perhaps it is a whole undiscovered species that I can name sketchandjamicus. Now for something completely different. Here is a red spotted purple aka Limenitis arthemis astyanax. I found this newly hatched one still in the process of expanding its wings while hunting mushrooms in the forest. There are always critters to find if there aren't any mushrooms out. I often find mushrooms on my evening walks. These bright white polypores were easy to spot in the darkness on this small branch. I have no idea which polypore this might be. I suspect this is some sort of mycena mushroom as it was growing out of wood. There is also a bonus bed bug looking critter in the gills. I suspect this is an instar of a beetle and it is beefing itself up on mycena meat. This is a powdery brittlegill aka Russula parazurea. It has a grayish moldy looking cap color with these nice symmetrical gills underneath. The stem is broken because these brittlegills have a sort of chalky texture to them that causes them to break apart easily. Most russulas don't really have a good taste to them and require parboiling to remove toxins, but once you parboil them they get soggy. The only one I would recommend harvesting is the green cracked russula as is can be eaten raw and has no toxins. The powdery brittlegill has a spicy taste to it that burns your tongue so I don't recommend eating them. Now for one of my favorite mushrooms out in the forest. Cantharellus cibarius aka summer chanterelle or golden chanterelle. I find these out in the dark soil underneath hardwood trees after the first summer rain. They are quite abundant here and I usually eat them fresh in gravy or on pizza. The rest I dry and powder for soups. Their taste is a rich mushroom flavor, and raw they almost have an apricot aroma to them. The only trick with these mushrooms is to go out as early after the rain as possible to make sure you find them before the worms and beetles get to them.

That's all for this #fungifriday more mushrooms in the hand for #mushroommonday :-)

Thanks, more picked mushrooms on monday :-)

It's a collection of tiny mushrooms, I love that you take macro photos! 😀 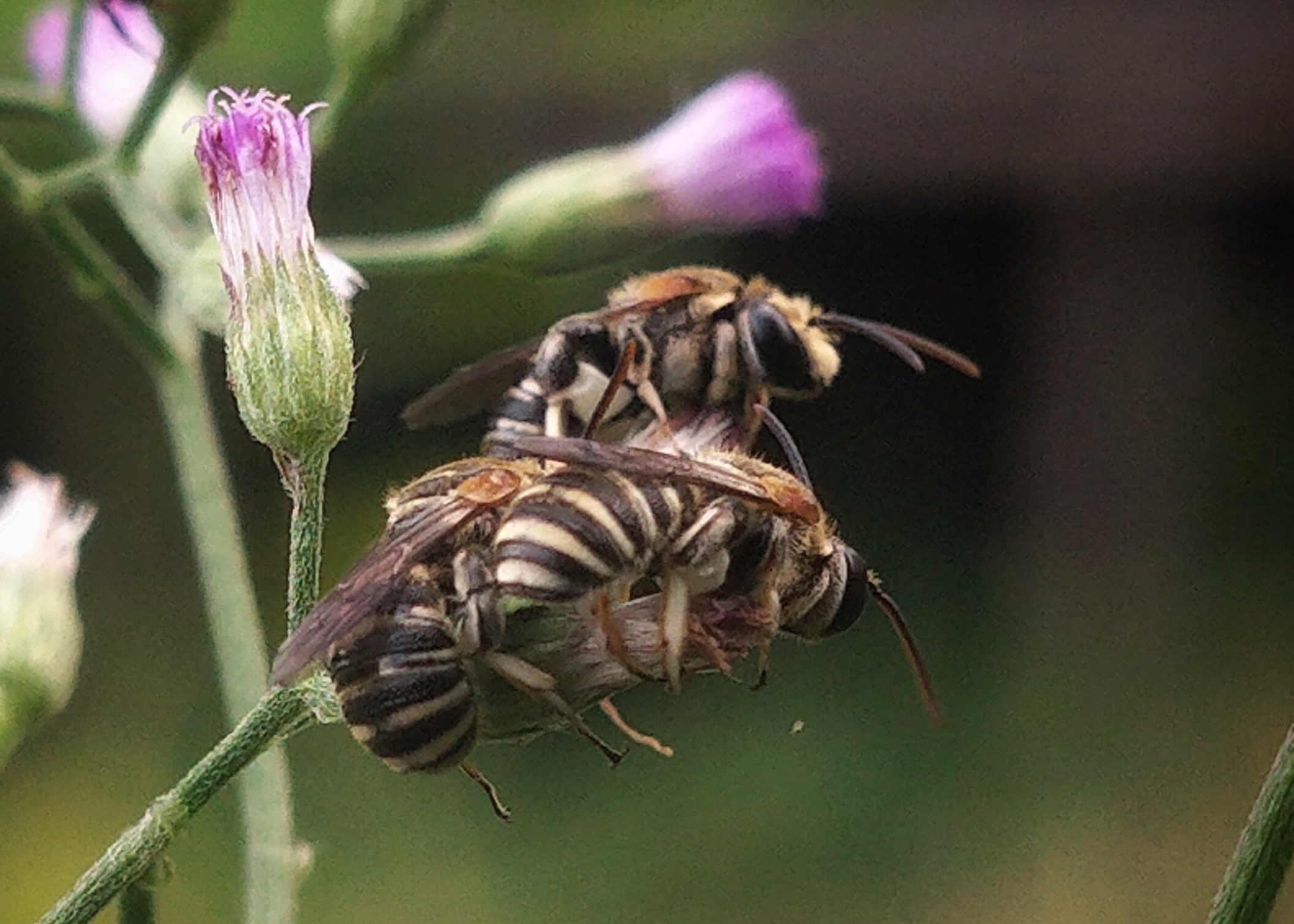 Are those some kind of carpenter bee? They look pretty tame and friendly.

Yes, it's a type of bee that preys on flower pollen, I took macro pictures it's very easy, they are tame, different from other types of insects. 🙂

I haven't seen this amount of variety before in a single posting! Great work, I like the little tiny one and I don't believe I've ever tried a Golden Chanterelle before. They say they're the most sought after type. Put it on a !PIZZA for sure, that's where it should be 😀

I bet if I stooped down to ground level on the forest floor there would be even tinier mushrooms I haven't noticed before. Chanterelles are my second favorite mushroom, first is chicken of the woods but it is more of a fall mushroom and sort of rare to find.

Chicken of the woods? Now you have me intrigued, you'll need to post one of those in the future if you have one and let me know to take a look.

They are really unique looking unmistakable. Everything you show is really cool.
You show different types of mushrooms.

Thanks I have many more to show on #mushroommonday

The photos are so amazing the mushrooms look so perfect

Thanks, the tiny ones are hard to photograph.

Beautiful butterfly!
The tiny ink cap is very pretty! There is plenty of them around here, not sure if I saw such small ones yet.
And you got chanterelle... I heard they are mean :D

The chants are mean but I'm meaner lol.

The snails are the meanest though.

Yea... you do not wanna mess with them..

Sometimes I see my favorite mushrooms in the forest from a distance then when I approach closer they are covered in snails and slugs with a bunch of holes bitten out of them.

the mushrooms and butterflies that you photograph are very beautiful, I am very happy to have a camera like the one you are using, thank you for sharing, have a nice day.

Most of these are just phone camera photos. But with camera raw editing you can fix the highlights.

what type of phone are you using. what application can edit like that.

I have a samsung s9 and I use photoshop express app.

thank you friend for the info

Just so you don't wake up one day tied down to the ground by them.

The summer chanterelle is pretty cool. Great color, and you state that their taste is quite rich.

I love the mushrooms with gills. It makes them look so exotic. I am eager for the spring to capture and identify some of the many mushrooms growing in my backyard. These Fungi Friday posts have really sparked my interest.

Chanterelles are great, sometimes you can buy dried ones in the store, but depending on if you have oak and maple forests near you they can probably be found there after the first summer rain. The key to identification of chanterelles is their veiny gill pattern that runs partially down the stem.