Today, Sunday, got off to a great start. The weekend has come to an end, and the new week has begun. After lunch, I checked in on my social media accounts as usual to engage and see what others were up to. After tweeting about a few fantastic hive posts, there were unread messages

too. One was a message request, so I went through the familiar ones first, which were mostly promotional, and then opened the message request to find out what it was. 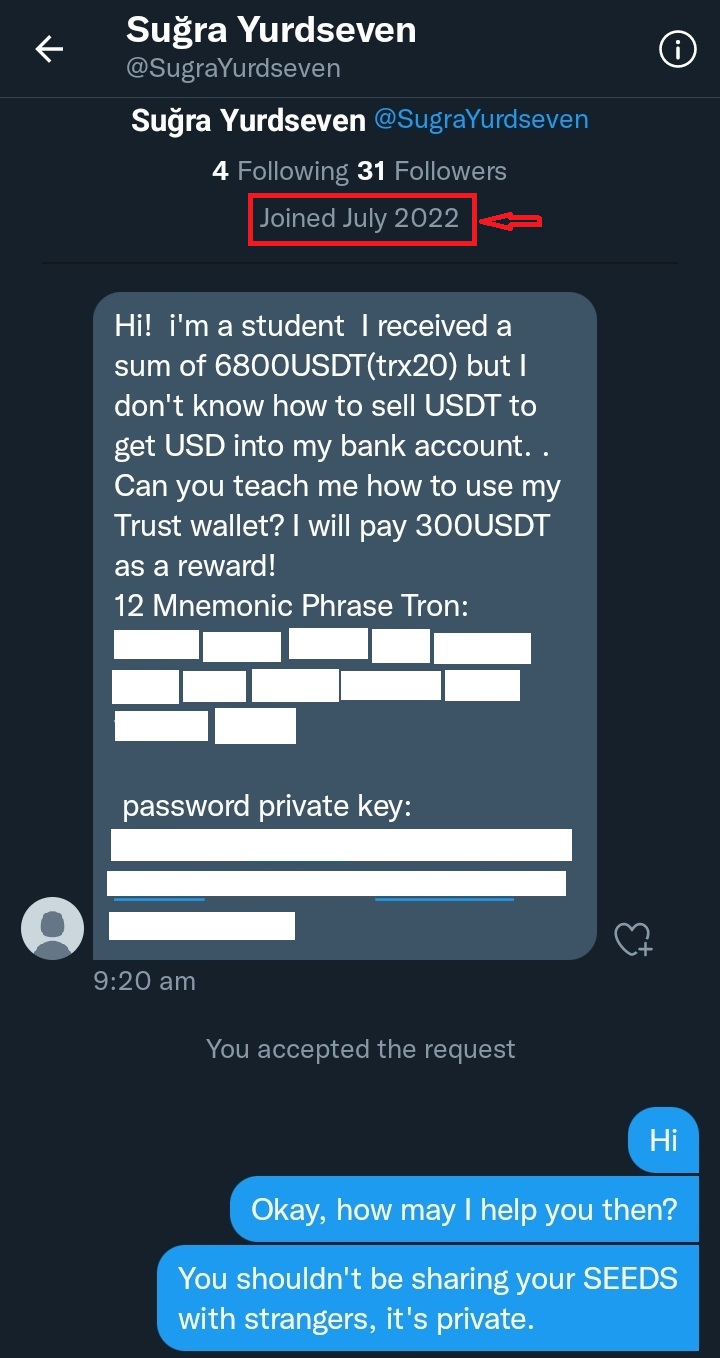 This Twitter handler, who goes by the alias Sugra, sent me a "Help!" Alert. To be honest, I didn't want to keep reading because ❌ "6800USDT with REWARDS?" ❌ That's no good.
But, What drew my attention was the 12 Mnemonic Phrases for a Tronx Wallet, and there was no link to click on, which was unusual.
"What the tweethell is going on?"
I wondered. As a result, I took a screenshot and sent it to my friend @yaziris. He's always had our backs at the terminal server [a.k.a House of Help], and I usually come to him with issues that I don't understand, particularly crypto and techie stuff. 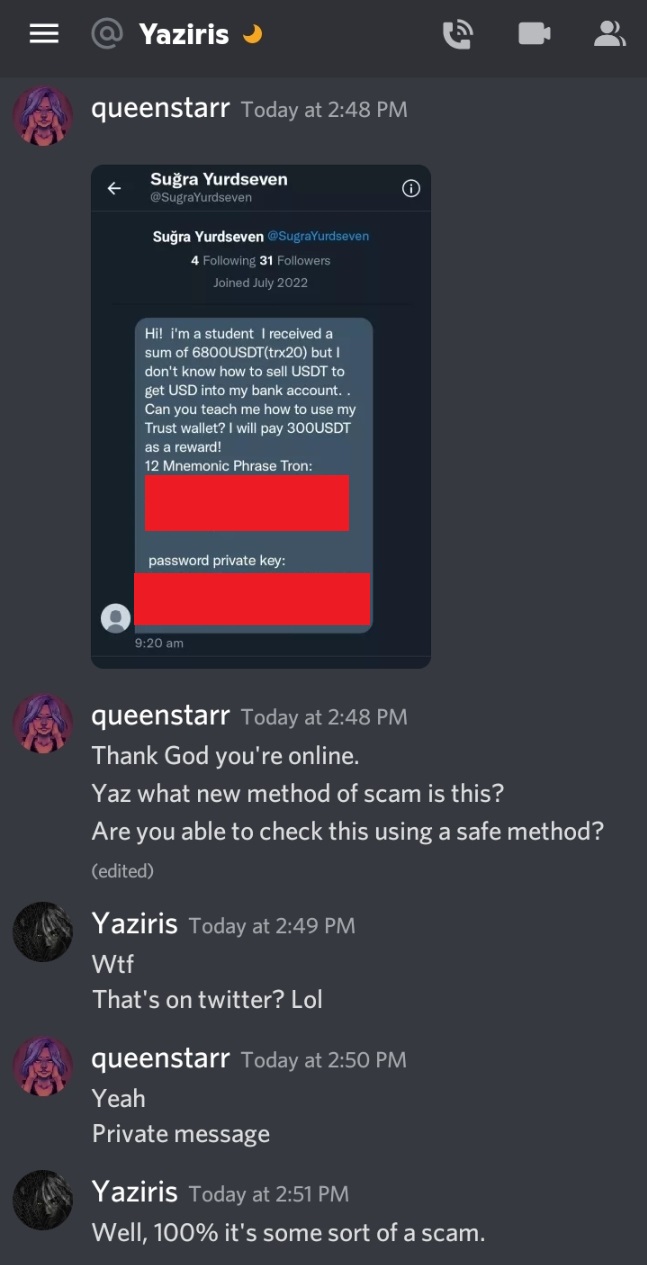 And, as expected, he immediately detected the obvious BS. But, once again, we became curious, wondering what this new scam was all about and for what purpose. So we put on our detective hats and played along, with the warning not to click on any links. My heart was racing twice as fast as I opened my Trust wallet and created a new wallet Testing, and I made sure to follow his every instruction.

We discovered money in this Sugra's wallet when we opened it. But not the $6500USDT, just $1400USDT. We then took a step back. Questions began to fly, such as, "Why would this Sugra give his/her wallet key phrase knowing there is money in it?"
Is he/she truly in need of assistance? [Of course, I'd help if genuine] Or is this some kind of plot/scheme?

So we thought that I make a transfer to myself and see if it goes through [it's really weird, but sometimes, what you see isn't real]. When I attempted to send $500usdt, it requested an 18TRX transaction gas fee.

We then considered checking the wallets transaction history once more. There were a few TRONX and Tether USDT transactions. 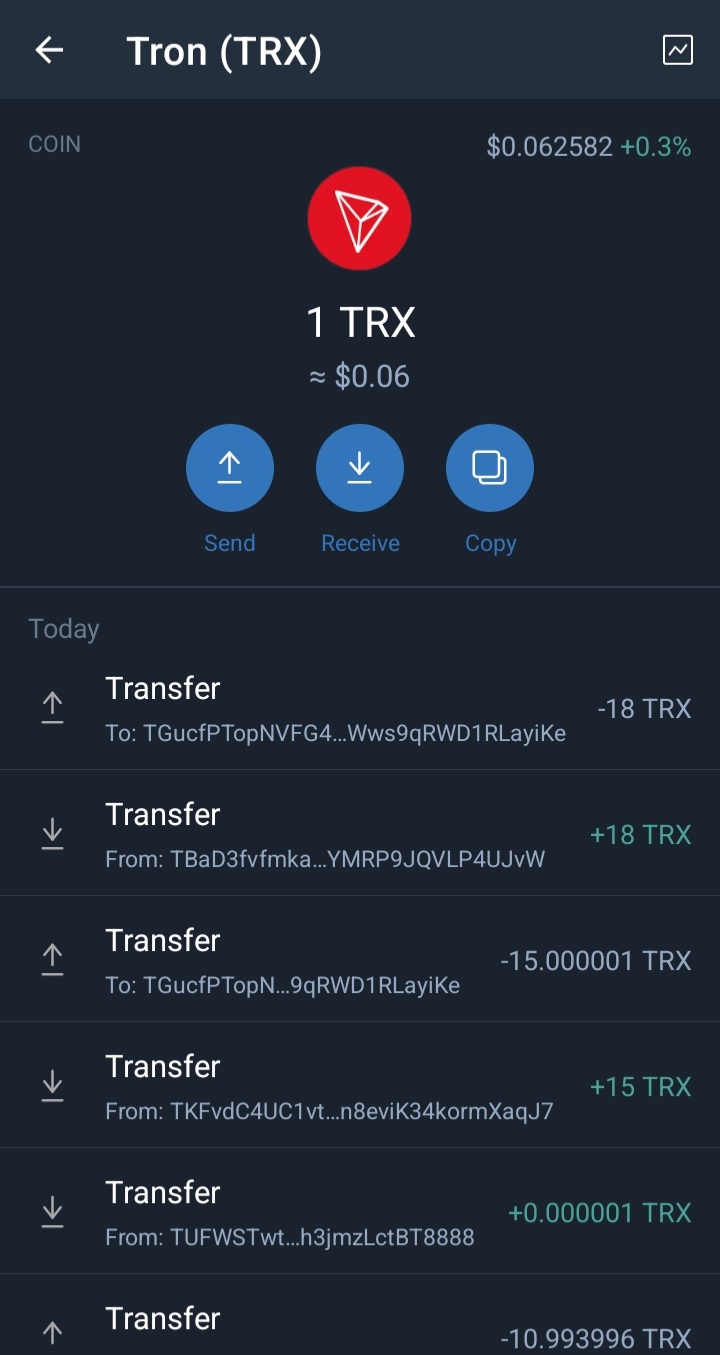 On closer look, discovered that the time frame/interval between when TRONX was sent into and out of the wallet was in nano-milliseconds. That's when we realized what the scam was all about. We were still curious and I had some hive, so I purchased 18TRX with it [we had an idea of what was going on, but sacrificing 2-hive to uncover this plot was well worth it].

I booted up my pc and decided to become "Starr the Flash". I'd be lightning-quick, using my PC to transact the TRX and immediately hitting the send button to receive the USDT. That is, if what we thought was correct. I was very quick, but the transaction kept saying "Error!!!" It was all over because Sugra was lightning super-fast and carted away my 18TRX.😂 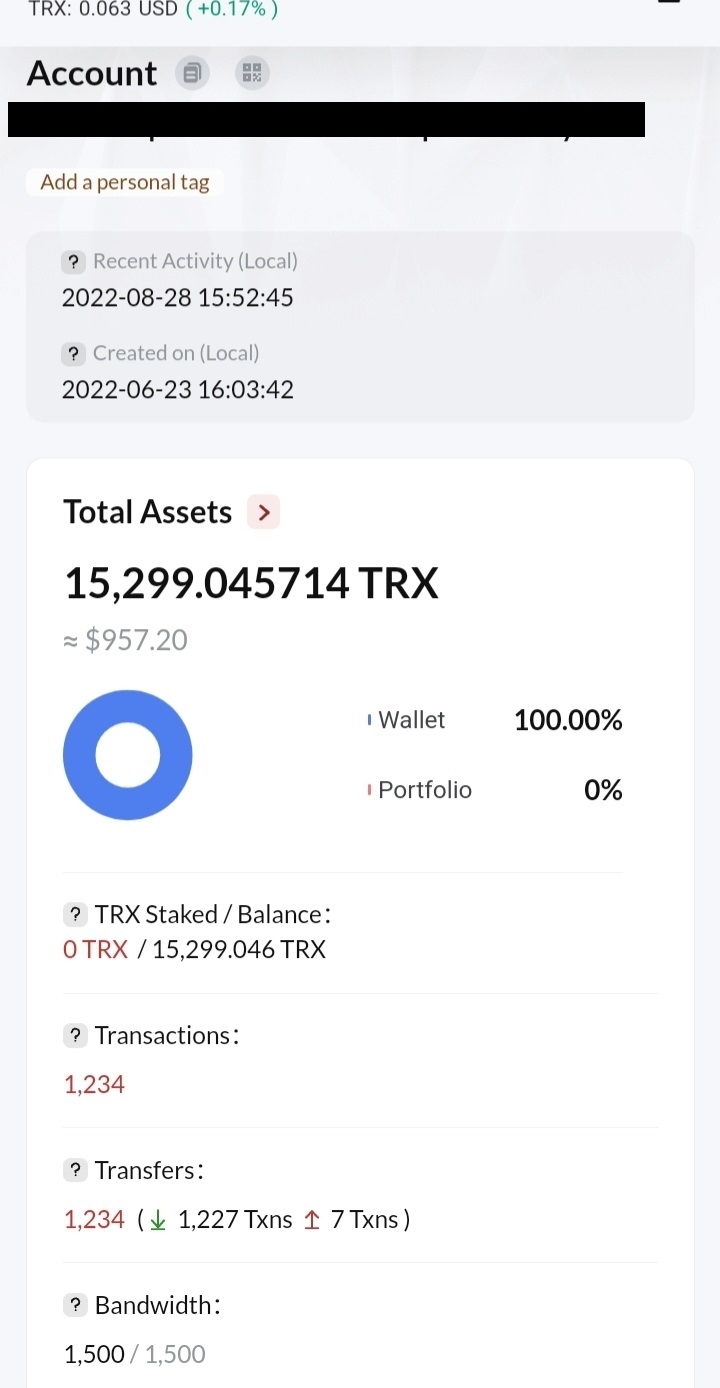 We finally confirmed what it was all about as a result of this. Because this is a "WATCH WALLET," the "Fraudster-sugra" has created numerous fake Twitter accounts and has been sending the same message to as many people as he or she can. He/she makes you pay the transaction fee after you've been baited, beware he/she is using a bot. You are not only paying the transaction fee, but you are also increasing he/she's TRX balance. "Fraudster-sugra's" total TRX asset is currently 15,299TRX ~~ $957. All of these coming from deposits made by people from all over the world.

WHAT LESSONS CAN WE DRAW FROM THIS SCAM❓

"Therefore let the one who thinks he stands firm [immune to temptation, being overconfident and self-righteous], take care that he does not fall [into condemnation] - 1 Corinthians 10:12"

Thank you @yaziris for the assistance and you for taking time out to read. I hope this comes as useful information to you and anyone you may know who needs some enlightenment.

Everyone protect you, your crypto assets and Stay safe✌️.

✅All screenshot images for the sole purpose of authenticity were taken from my wallet and social media accounts.

✅Free to use page dividers from @theterminal #page-dividers channel.

✅Free to use Banner designed by @Weone

Why is everyone trying to scam you?? lol

Btw, I have encountered this type of scam last year. They are getting better each day. Stay safe, my Queen!!

O my! They truly are getting better Thank God for decentralized wallets like Hive.

Why is everyone trying to scam you??

I don't know too, maybe there is an invisible "whale" next to my name🤣

🌺Thank you so much, fingers crossed [pray for me😅]

Hahaha. The moment I saw that you needed Tron to move the money, I understood how this new scam works.... Lol.

He is really wise in my opinion. Cos he knew a lot of people would want to steal his token.... I am not talking about you guys though.

So he played on their greed and took their money.

This is also another scam method that we have been warned to look out for though. It's not new for scammer to ask you to send money upfront before getting credited. Only, your new friend raised the bar.

Thanks for sharing. We will be careful.

Hello Atomz, a really thoughtful comment. Indeed, I've come across a few but this one really knocked me off balance. Like "Here is my token, steal it if you can" what a challenge🤣
I totally appreciate your visit , you stay safe and will do my level best to stay safe too🌺

Omg can't believe to see that scam. And you know what? It is a Turkish account. That makes me feel worse. I don't want to see Turkish scammers...

I too couldn't believe it, shocking😅
They're coming up with strange methods. "There is no free lunch/money" that alone should keep us safe.
He/she might not be Turkish, that is probably a fake account name, highly likely it's a fake name. Appreciate you being here Kardesim🌺

That's very true. Nobody is going to give you anything for free. If you follow this saying, no one will ever scam you. And you're absolutely right about it being fake. No one would try to scam someone with their real name. Even the most inexperienced lol. You'r welcome brother 🤣🤣.

!1UP It is very important to be aware of all kinds of suspicious situations and to know what types of scams are being carried out. Thanks for sharing your knowledge with us!

Very true. Pleasure sharing and I hope their antics keep getting exposed. Appreciate your kind visit🫂

Well, to clarify couple of important things. The reason for the withdrawal to another wallet was to secure the funds first for the 0.0001% chance that it might be a legit person asking for help. Then when there wasn't sufficient funds for the gas fee, that 0.0001% chance dissipated, and it all immediately became clear. Absolutely, the action to still go on and try out the gas fee stuff even after you detected the proper scam was just my stubbornness to confirm if truly what you detected was fact and it turned out to be fact.
Girl gotta know what a girl gotta know😜😂
Appreciate you being there🫂

These thieves never stop with the tactics 😠