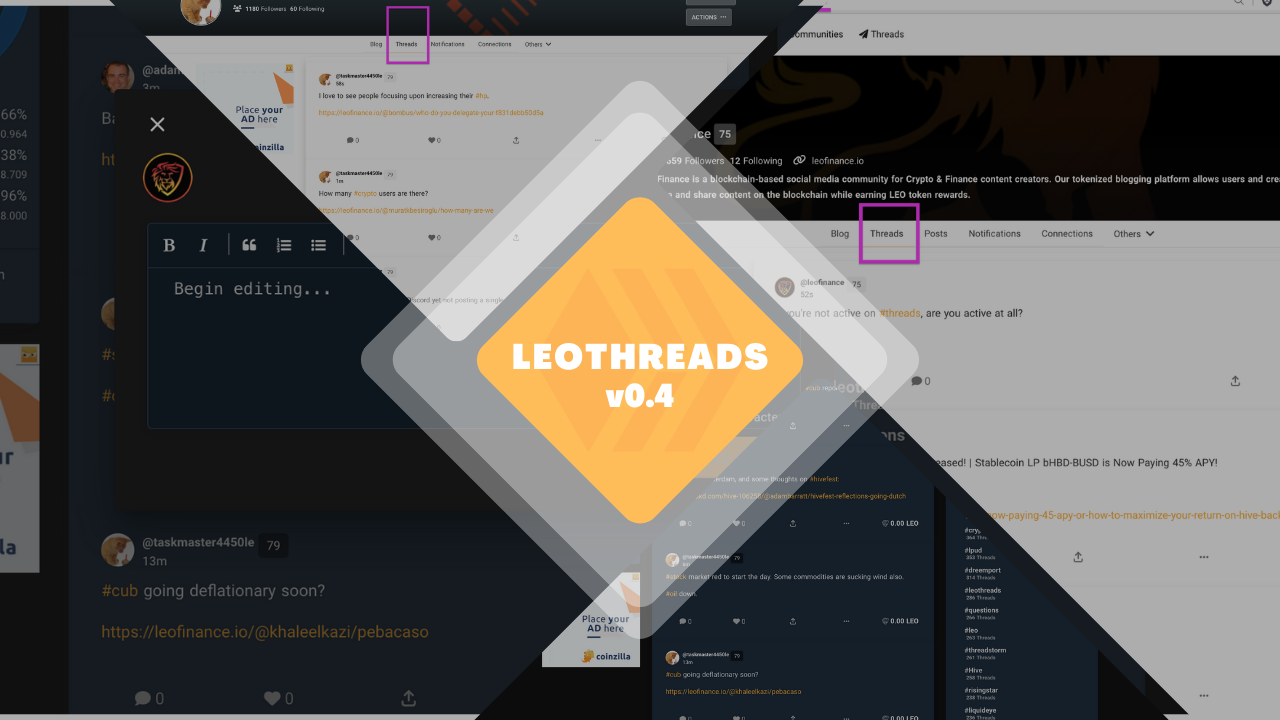 Designing and developing LeoThreads has been quite the journey. We've gone through so many different iterations in terms of designing and implementing various features.

If you've been a regular Threads user, then you'll already have noticed some MAJOR performance improvements over the past week. We released what is essentially a rebuilt version of the Threads Engine which controls how content is retrieved and stored on the Hive Blockchain.

This update to the Threads Engine has radically improved the user experience. If you used Threads prior to the past week and haven't tried it recently, I highly recommend loading it and seeing the difference. We managed to shave the loading speed down from 30 seconds-2 Minutes to 3-5 seconds... It's a radical improvement, to say the least.

The new Threads Engine also brings a number of other enhancements - one major one being that we removed our reliance on Hive-Engine to load Threads content. This is a change that will slowly be migrated to the blogging aspect of LeoFinance as well.

This new update changes that for Threads. The Threads Engine will hold it's own copy of all the blockchain data and still show Threads even when Hive-Engine is down. It will also display a little "Hive Engine is Down" notification in the bottom right corner of each Thread. You'll notice that this message replaces the upvote button: since the APIs being down will inhibit certain features. We'll get into this segmented development setup later in this post. 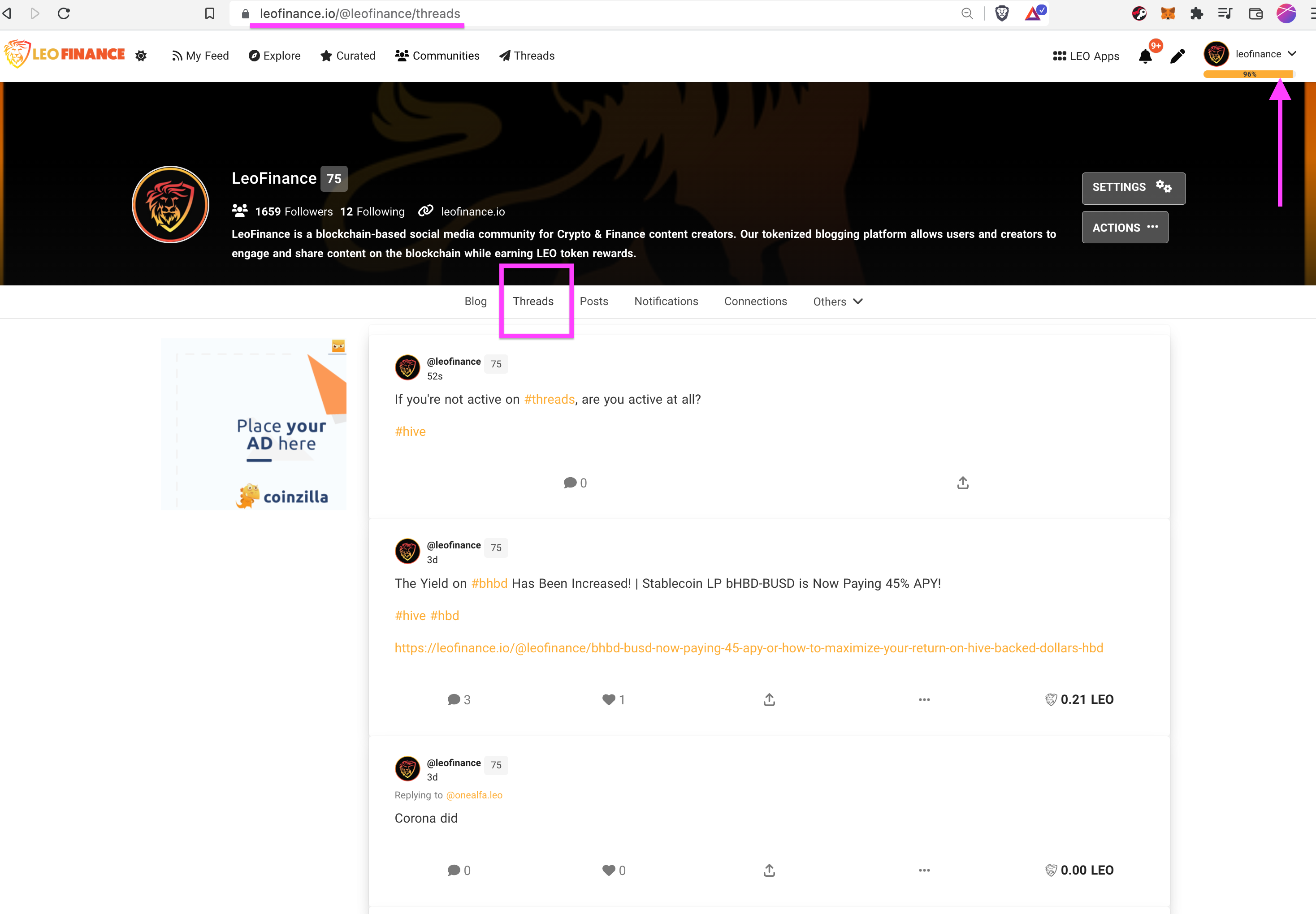 We've added one of the most highly requested features: My Threads.

I'm sure people will find a creative way to use this feature, it's much more powerful than it may seem on the surface.

Prior to this release (the new feature launched today), you had to dig through old Threads to find things that you had previously published.

Why would you care to find Threads that you published? There a wide variety of reasons. I would say the #1 reason to want to look through your recent / old threads published from your Hive account would be to respond to people who left a reply on one of your older Threads.

This is a common practice on blog posts and also on Web2 Microblogging (Twitter).

To release this feature, we had to do a bunch of backend and frontend work to make it possible. It works like magic on the frontend but the backend is scraping a whole bunch of data and collecting it neatly for you to load.

You can visit "My Threads" by hitting the Profile icon in the top right and then select "Threads" right next to "Blog" on your profile page!

I've been playing with this feature a lot and it's definitely a multi-fold improvement in terms of engaging with people on Threads that you've posted, enjoy! 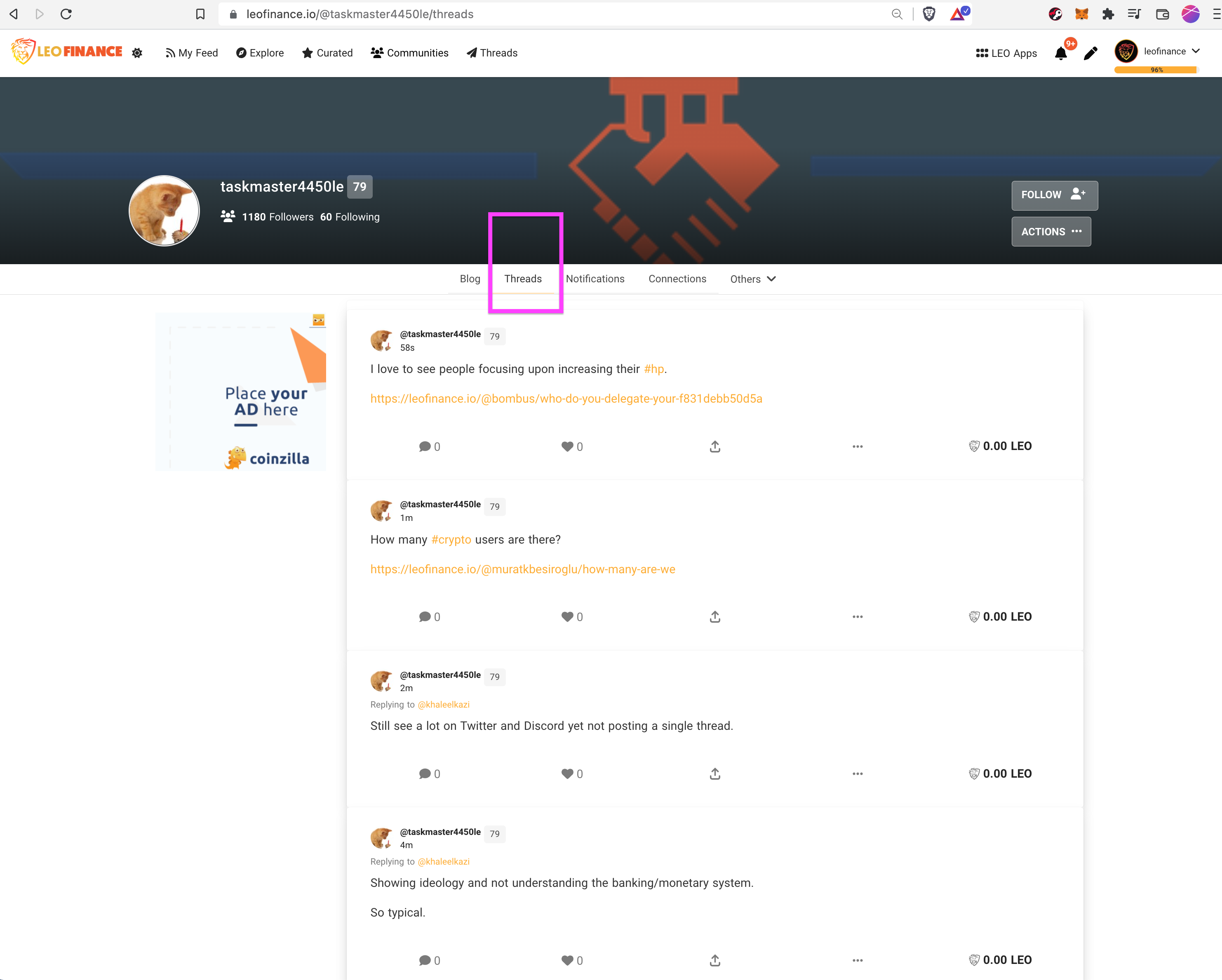 Viewing your own threads is a fantastic way to engage with people who have been engaging with you... what if you want to dig through someone else's profile history and see what they've been Threading about and replying to?

Now you can! Visit their Profile page and hit "Threads" next to "Blog" in the menu.

You can see what they're creating as top-level Threads and as you can see in this image, you can also view what they're replying to within the Threads platform.

Jump into the conversation by clicking on any Thread!

You can also quick reply by hitting the little Comment icon on the bottom left of any Thread to open a pop-up reply window.

The backend for Threads was completely rewritten. This is how we achieved the 10x improvement in loading speed.

If you had been using Threads prior to the past week, you'll notice a VASTLY improved User Experience. It's incredible to see how this new setup performs in the real-world.

This goes to a much broader point about Threads: Open Beta.

Threads is in Open Beta and it's extremely important that we get as much testing done as possible.

All of your testing and feedback is how we rapidly release new features, bug fixes and performance improvements like this one.

We built Threads in an echo chamber for 18 months. This allowed us to get a lot of backend work done and infrastructure built but now we've moved on to the key step of releasing, getting feedback, iterating quickly and repeating this process relentlessly.

The new backend is a testament to how much further we can push Threads to create the best Web3 microblogging experience on the planet.

I believe we're well on our way to achieving this. Through hard work, feedback and community support to grow Threads, we'll make something truly special.

In the coming months and years, Threads will become one of the largest Web3 Social Media platforms in the world. It lives as an extension of LeoFinance but watch as it takes hold of the entire platform and radically reshapes what it means to be a LeoFinance Lion 🦁

This is a great leap in the development of Threads...

It sucks to scroll down just to view your old threads and this affects engagement in threads...

But with this new update.. C'mon... its gonna be massive

This is simply an awesome work, and stressful one as well. But the more we update, the more threads progress, and the more we hit the mainstream world and take over micro-blogging space 👌

Because I LOVE threads

Every so often someone needs to reward you for the instant joy you bring when you kaboom a post.

Honestly, it's much faster than I expected, and there are much more great improvements. This makes me very happy because I love #Threads

Super smart changes and loving the fact that you're being less reliant on the Hive blockchain and hive engine to pull the content. To be honest there's really no need to store all that short form content on the blockchain. What matters is a fast load of that content and then when voting and rewarding that's when it hits the blockchain.

These improvements are seriously increasing the value of threads and paving the way for project blank!

“less reliant on the Hive blockchain and hive engine to pull the content. To be honest there's really no need to store all that short form content on the blockchain.”

This is actually not accurate. We’re storing all content on the hive blockchain. That’s what a blockchain is for: storing data.

Our update was a systematic update to how we store and retrieve data on the Hive blockchain - using a system that is far more efficient than what we had in the past.

Just want to make sure it’s clear and everyone knows that all content and data on LeoFinance is stored on-chain. No made up databases here. It’s all databases interacting with the blockchain directly

Awesome an really impressed with her improvement and work been done on it which is really amazing to attract more users to threads.

Thanks for letting us know. I suppose you spoke about it in the AMA too, but I couldn't listen in. My Threads should be huge for boosting engagement from inside the platform. Up until now, I searched through the comments on the container post when I received a reply notification and answered on Hive.

Threads is transforming for the better on the infrastructure side and the user experience, which ultimately gives it value. The potential is immense and I think that with the threads engine being well-oiled ;)) it will run fast and furious, vitalizing the entire Hive blockchain as well!

Massive improvement, I believe this will be massive in the development of threads, I wish you have a features under our leofinance page where we can share our post on threads by just clicking the icon.

Going update from the community as per threads, thia is definitely a good one to see also

I have noticed a major upgrade. Expecting an improved engagement in the coming weeks.

Thank you for finally making "My Threads" feature. Using Threads will be so much better now.
!PIZZA
!LUV
!CTP

What a powerful upgrade. This makes it a lot easier to engage with threads made earlier in the day and to respond to comments that came in.

Good job, even though I'm new to using this DAPP. But I feel good performance and friendly. I can run the web smoothly and use the features with ease of interface.

I hope the project will continue to grow !

It always good to see updates from leofinance. I love and appreciate liofinance updates and I'm growing up everyday with Leo. My heartiest gratitude to leofinance.

Nice. It’s great to see your dreams come true, and that we can enjoy them.

Congrat LeoFinance for this feature. This could powered other Hive App in the future.