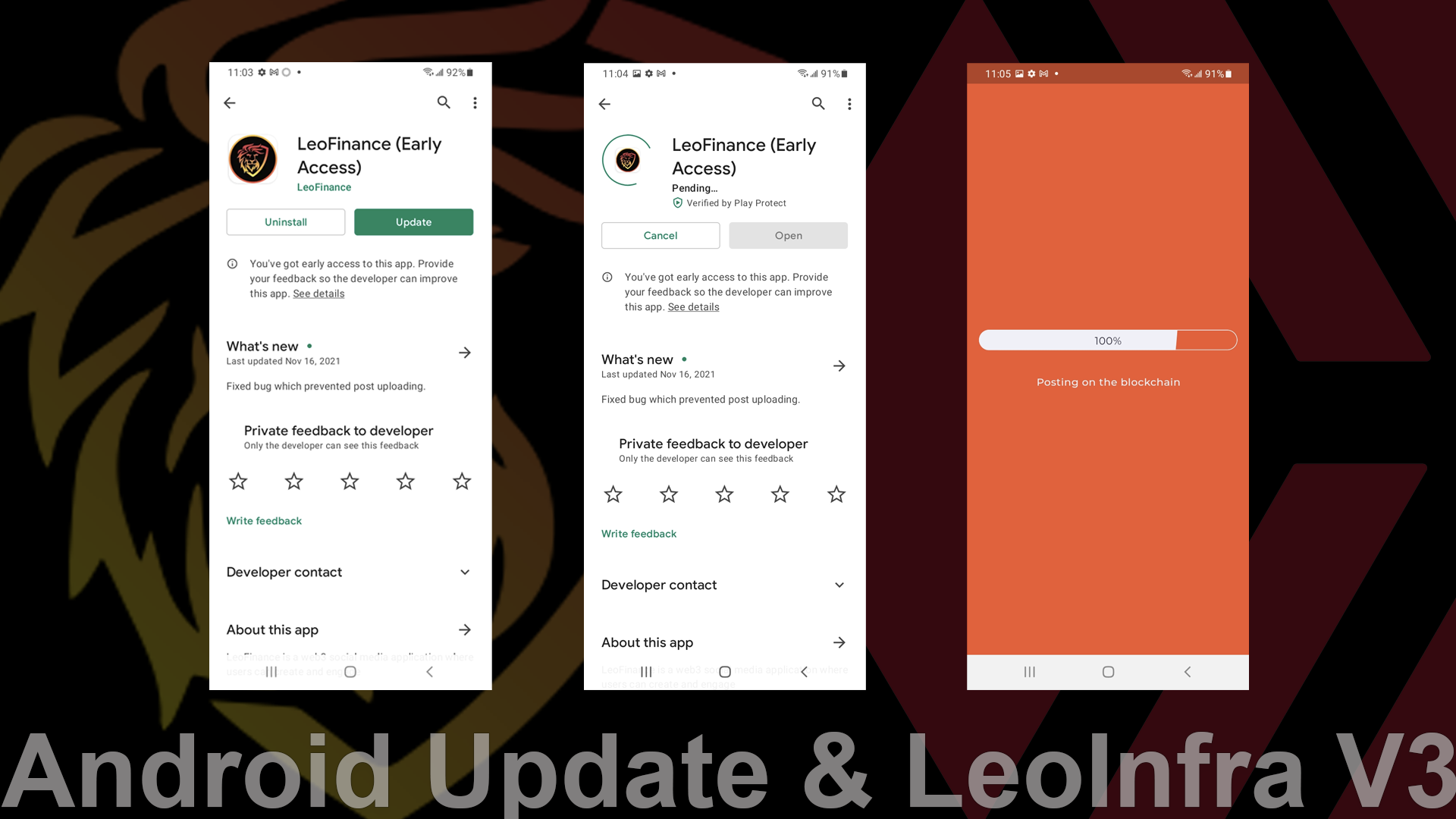 LeoMobile development has been happening at a rapid pace behind the scenes. While we await IOS approval, we've been working on a number of amazing core features and also bug fixing the Android version of the mobile app based on all the feedback we received since launch.

LeoMobile on Android is in "Early Access" Mode which means that you can find it on the Google Play Store via the links we distribute on LeoFinance.io, Twitter, Discord, etc.

We were pleasantly surprised when Shawn logged into the Android Dashboard and shared this image: 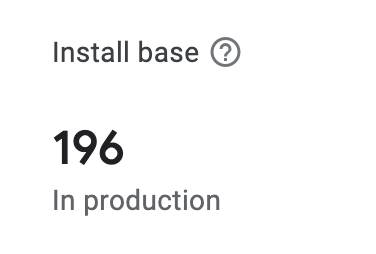 We're about to hit 200 installs on LeoMobile for Android! That's quite a bit more than we expected and it also means that we can battle-test all of the amazing new features that are getting deployed in the coming weeks as we approach V1.

If you haven't downloaded LeoMobile on Android yet, you can check it out in the Google Play Store!

One thing we broke in between closed testing and open testing is the posting functionality. As soon as we launched LeoMobile on Android, we started receiving bug reports that posting to the Hive blockchain wasn't working properly.

We had to nail down a process for deploying the Android updates but we're happy to report that we can now deploy LeoMobile Android updates in ~24 hours (of course, subject to change based on potential App Store roadblocks).

We deployed a new update yesterday and it went live on the Google Play Store this morning!

Once you've downloaded the update, you should be able to post from your mobile device without any issues. We've also fixed some image uploading issues we experienced since the launch of open beta. Head over and check it out!

If you have any feedback on the app, we encourage you to open a Tech Support ticket in Discord and share it with the team. We've been collecting and prioritizing all of these feedback/bug reports 🦁

We're all anxiously waiting for the day when the Apple App Store grants us access to open testing.

The issues we're having on that front are quite annoying. All bureaucratic at this point - we're simply waiting for them to approve our new build of the app.

They are concerned because we deployed 2 app versions: 1 for closed beta and 1 for open beta testing.

To them, it looks like spam / cloning (i.e. 2 apps were created with the same name and the same general features). They're concerned about authenticity and the process to communicate with them and show proof of authenticity for both of our versions of the app has been a long and annoying one.

Regardless, we're hoping to see LeoMobile hit the IOS App Store as soon as possible. It will happen suddenly and without any warning!

Despite any app store delays, we continue to develop in the background. Our major focus in the past 2 weeks has been integrating LeoInfra V3.

LeoInfra V3 brings some new sign up options to the LeoFinance ecosystem. We've decided to focus on building out the LeoInfra update and then integrating it into LeoMobile first. This also coincides with a refresh to the Login screen: 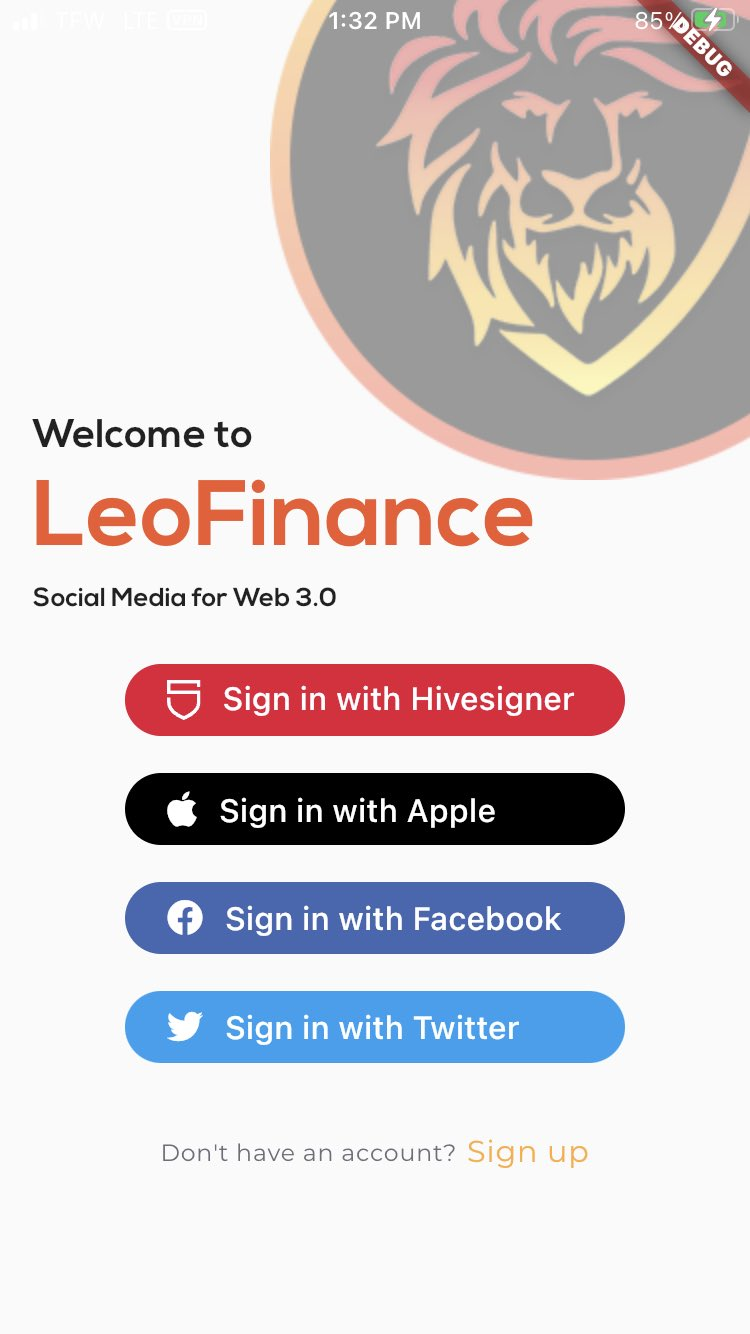 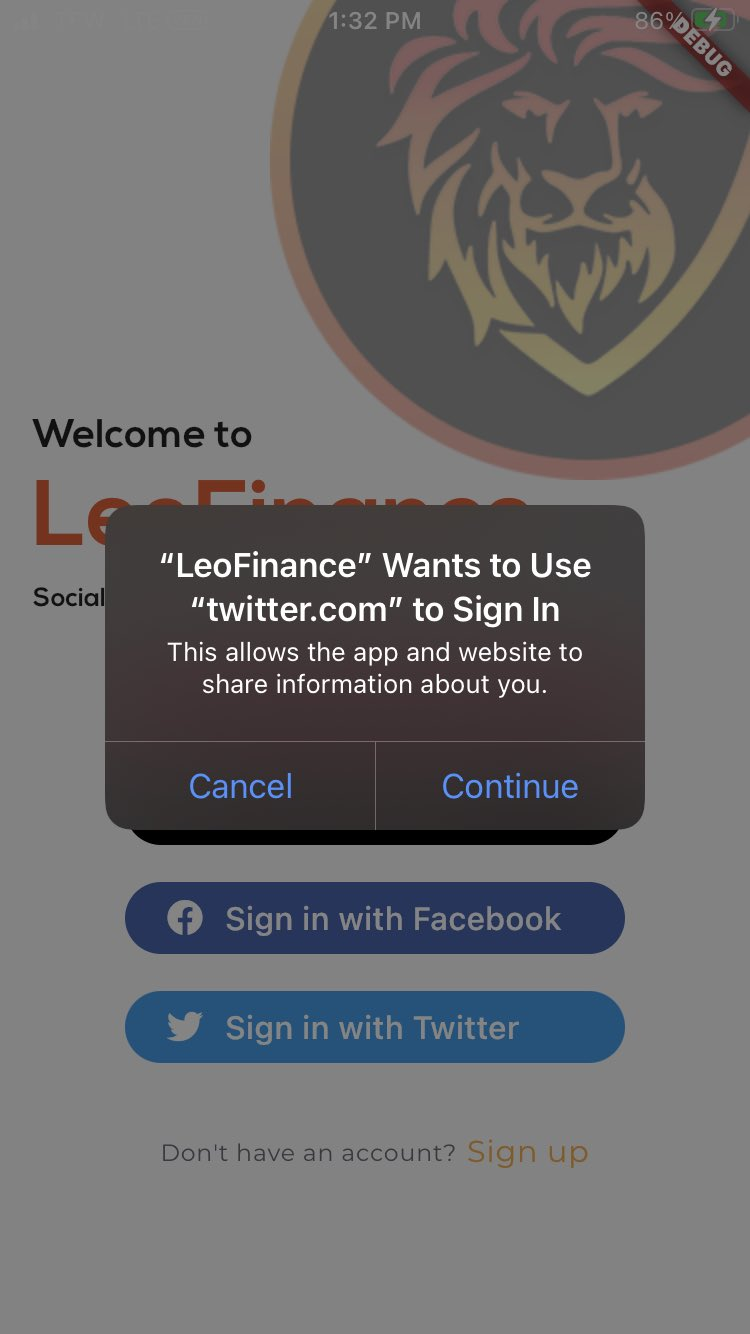 As you can see, LeoInfra V3 brings 2 new sign-in options:

The Facebook sign-in and sign-up option has been highly requested ever since the launch of LeoInfra V1 ~1 year ago.

We're excited to finally release it into a public version of LeoFinance Applications!

It truly fulfills our goal with LeoMobile: create an extremely user-friendly and intuitive portal to Web3 Social Media. With LeoInfra V3, users can sign-up and sign-in to LeoFinance and the Hive Blockchain in less than 20 seconds with:

Mobile Phone # and Email sign-up and sign-ins are coming to LeoMobile in one of our next major LeoInfra updates.

We've got a post planned to talk more in-depth re:LeoInfra V3 and the roadmap for V4. Stay tuned 🦁

p.s. don't forget that you can delegate HIVE POWER to @leo.voter and earn a 16% APR (paid as LEO) for your HP Delegation. These delegations of HIVE POWER are used to claim account creation tokens on the Hive blockchain which LeoInfra utilizes when creating Hive Lite Accounts for new users who sign up with Twitter, Facebook, Apple, etc.

It's probably a good investment to buy second hand android phone and get started with LeoFinance mobile earlier as tomorrow!

Me too! I'm using the closed beta version of LeoMobile IOS but I can't wait to get the IOS app to the whole community 🦁

I am using your right now and it is very swish!

Alleluia!
Finally back using the Leofinance mobile app. Gracias for the update that "made it happen". I might buy myself a new smartphone to celebrate that 😉.

Excited to see our updates getting deployed faster now! We've got some amazing stuff (like LeoInfra V3) around the corner 🦁

That's nice. I kind of missed not using the app for a few days, especially after tried it and started loving it. Using Leofinance via Brave browser on my phone is not that fun, you know...
Oh, by the way, when sound notifications, sir?

This could be an issue with the nodes. We changed some handling and deployed it in the update. If you're still having this issue it is either because:

To see if it's #2, please sign out of your Hive account on the app. Close the app completely, then open and re-sign in. I had a similar issue and it fixed it right away!

I just updated. It works perfectly. Thank you

"LeoMobile on Android is in "Early Access" Mode which means that you can find it on the Google Play Store via the links we distribute on LeoFinance.io, Twitter, Discord, etc."

The development at leofinance is amazing and seeing multiple ways of getting people into hive blockchain is really commendable to the team.

Aside helping people to find there way in crypto understanding with right crypto and finance information, increasing hive adoption in a seamless way through leofinance finance is amazing, and generating passive income via interacting with the frontend through delegation and other related means is great.

Keep the good work. Waiting for more development in the camp

I will definitely use it because such applications keep us up with HIVE blockchain.

Can't wait to hear your thoughts 🦁

Great to see the updated version works more better. Loving the app. Hope the iOS version gets approved so iPhone users get to enjoy the experience too

As I will need to be traveling quite a bit for my work, the updates on Leo Mobile come like a glove. Being on the go, the only option is being mobile so I can do some commenting from the airports.

I just downloaded it and will give it a try.

It's definitely back on. A big thumbs up to the Leo team for this incredible tool 🔥

The issues we're having on that front are quite annoying. All bureaucratic at this point - we're simply waiting for them to approve our new build of the app.

The joy of centralized institutions.

So many things happening simultaneously in the Leo ecosystem. I can barely keep up with them. The Leo token should at least be worth 2 dollars

I can not believe this. You are really great! I downloaded the app and am currently browsing. in the future I think you have great potential even from the hive ecosystem.

I was really waiting for this update, updated, will just try to post through this now.

This interesting knowing, I had issues I never talked about..
Thanks

Absolutely loving the mobile version, I am one of those early adopters. When I first downloaded it for Android, I noticed there were some issues with moving WLEO tokens over to LeoDEX to swap them over for HIVE tokens to then move to savings in HBD for that sweet 10% interest. I will have to update the app and see how it works differently now!

The easier you make it to sign into Leofinance the faster growth and adoption will occur. Good ideas

The update really makes sense although with a little challenges with existing posts on hive blog. I made a post about it.

Keep up the great work.

Looking great so far! Been using it for a few days!

I'm among the first 200 downloads, that's excellent, I also liked the possibility of opening it in other ways, excellent team keep it up :D

I love the fact you have fix all the bugs because I stopped using the app when I can do much on it. Thank for this update.

Hello champs. I'm recording a video and making a comment using the app. So far so good. The application is super light and easy to use. Can't wait for updates. Let's go!

I'm already downloading the application to test it

they have to put the button to edit the publication.

So glad to be one of your 200 early Android users. I would send you a screen cap of a display or formatting bug of the footer to this post but I can't include a pic in this comment. Keep working, keep chipping away at it!
PLUR

I am one of those people and one of the main reasons I kept my Android device even after going back to iPhone is this app. That and I actually prefer it to my iPhone, but I use the iPhone reluctantly because every single person I know uses iMessage. 😂

It is really something to carry the LeoFinance in my pocket all along. Way to go!

Personally, I love the Power % screen when upvoting a post very much.

Thank you very much for all the hard work. We the users are enjoying the mobile App very very much!

I’ll download the app from an android device. Looking forward to the IPhone 📱 version. Great work!