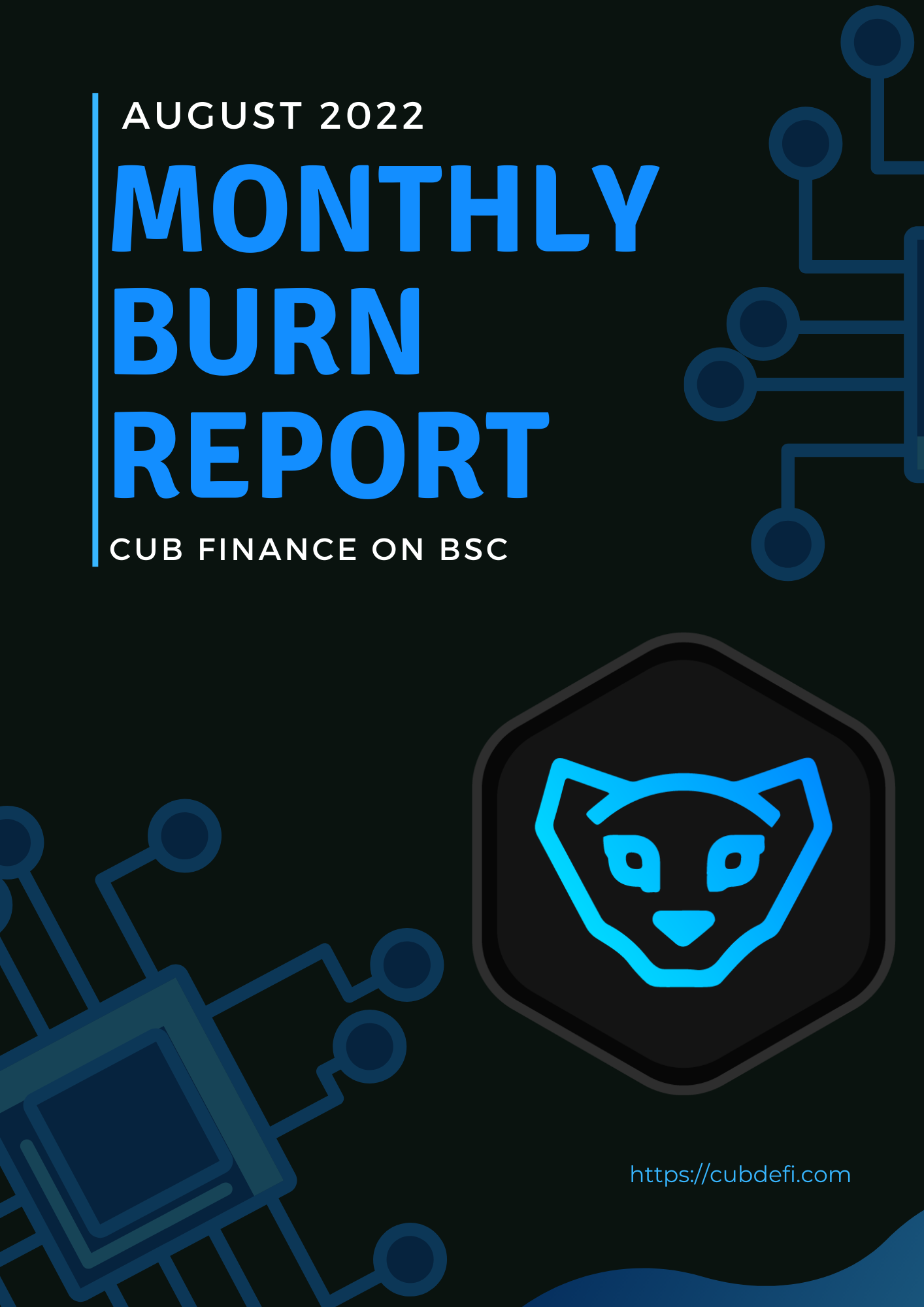 CUB launched in March 2021 with the mission of being LeoFinance's expansion into the DeFi space. CUB had an incredible amount of success in the early days - many of us remember when the CUB price hovered between $3 and $14 after the platform launched.

Since then, we've weathered many storms. Most recently, the 2022 bear market bringing CUB down to all-time lows.

View the full PDF of the CUB Monthly Report

The key narrative is inflationary pressures. The mission of LeoFinance is to democratize financial knowledge and access.

CUB is the key to the "Access" part of that mission statement. As time has passed, we've researched and developed so many different methods of building a truly sustainable, reliable, secure and growing DeFi platform.

All of that research has led us to the Multi-Token Bridge and DAO contract that we've deployed in the past 2 months on PolyCUB and past <30 days on CUB.

The MTB is now live on CUB and TVL is growing quickly. As of this report, we're at $297k in liquidity and growing fast.

The key to growing CUB is to grow the MTB TVL. As this TVL grows, monthly revenue grows. 100% of that monthly revenue is deployed to the CUB DAO which buys and burns CUB on a daily basis.

40% of all CUB Burned was Burned This Month by MTB

In the month of august, we bought and burned 203,920.15 CUB using only MTB Revenue for the month. This is a pretty incredible figure on such a low amount of TVL (especially since it wasn't a full month of $297k TVL... that number has just been growing this month).

CUB generated just over $4200 in revenue this month on $297k in TVL. Compare this to POLYCUB which generated $11k last month on $500k in TVL and you can see the potential.

Jump into the report for all of the details on how this revenue was generated and how we plan to grow it.

We've also created an "Escape Velocity" metric which aims to predict when CUB will flippen inflation and begin burning more CUB than is produced.

We believe that the Multi-Token Bridge on CUB is one of the first truly sustainable DeFi platforms to ever be created. This is just the beginning but our plan only works if the community deploys liquidity into the MTB. As the MTB grows in liquidity, the amount of CUB bought and burned will grow exponentially.

Right now, $17k per month is created via CUB inflation. This month we generated $4.2k in revenue and we're on pace to crush that figure in the month of September. How long until revenue flippens that figure and over 1,000,000 CUB is burned in a single month? Less than 2 months, in our opinion.

We highly recommend you view the PDF of this report. Below are screenshots that may get cut off depending on your browser. 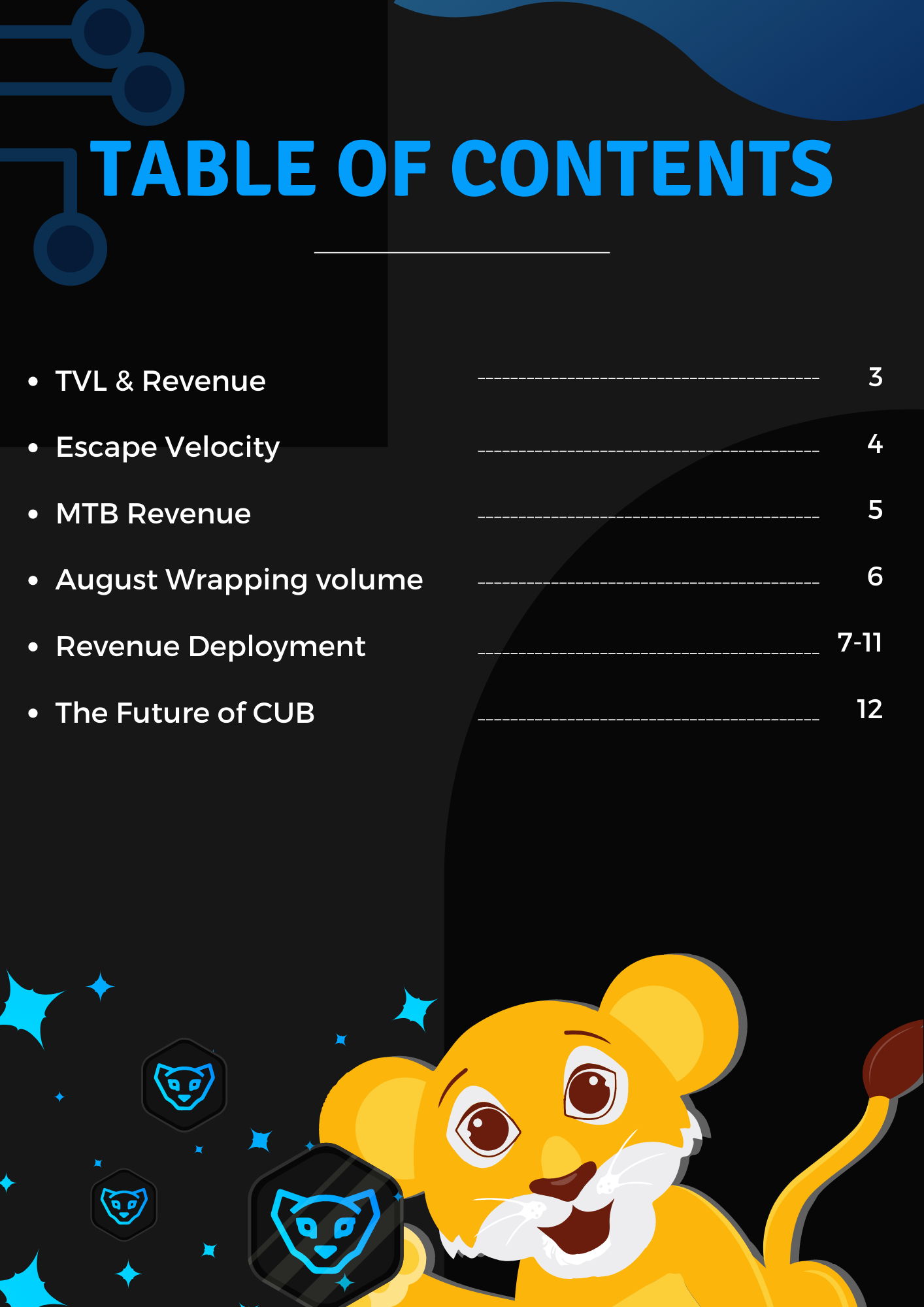 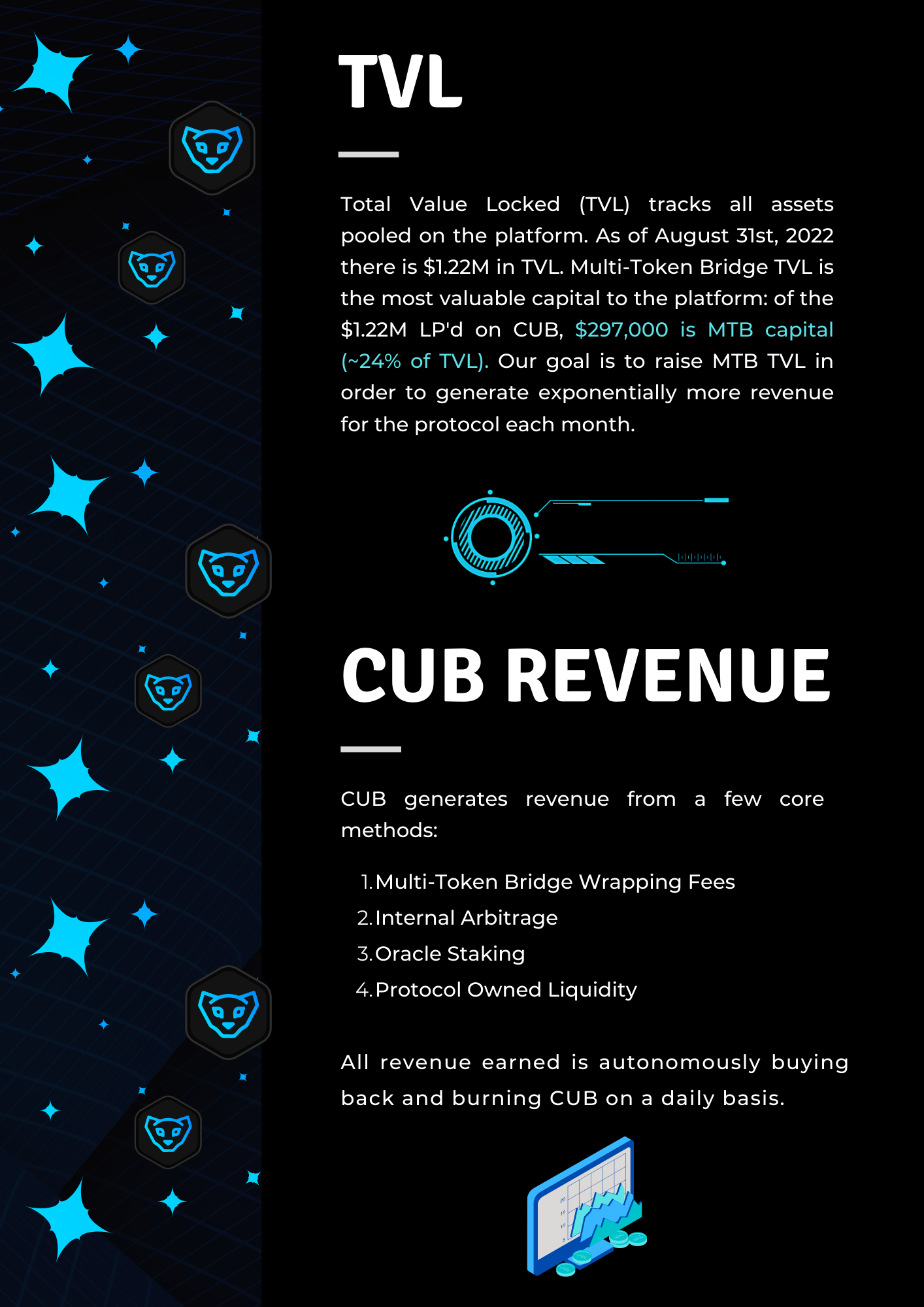 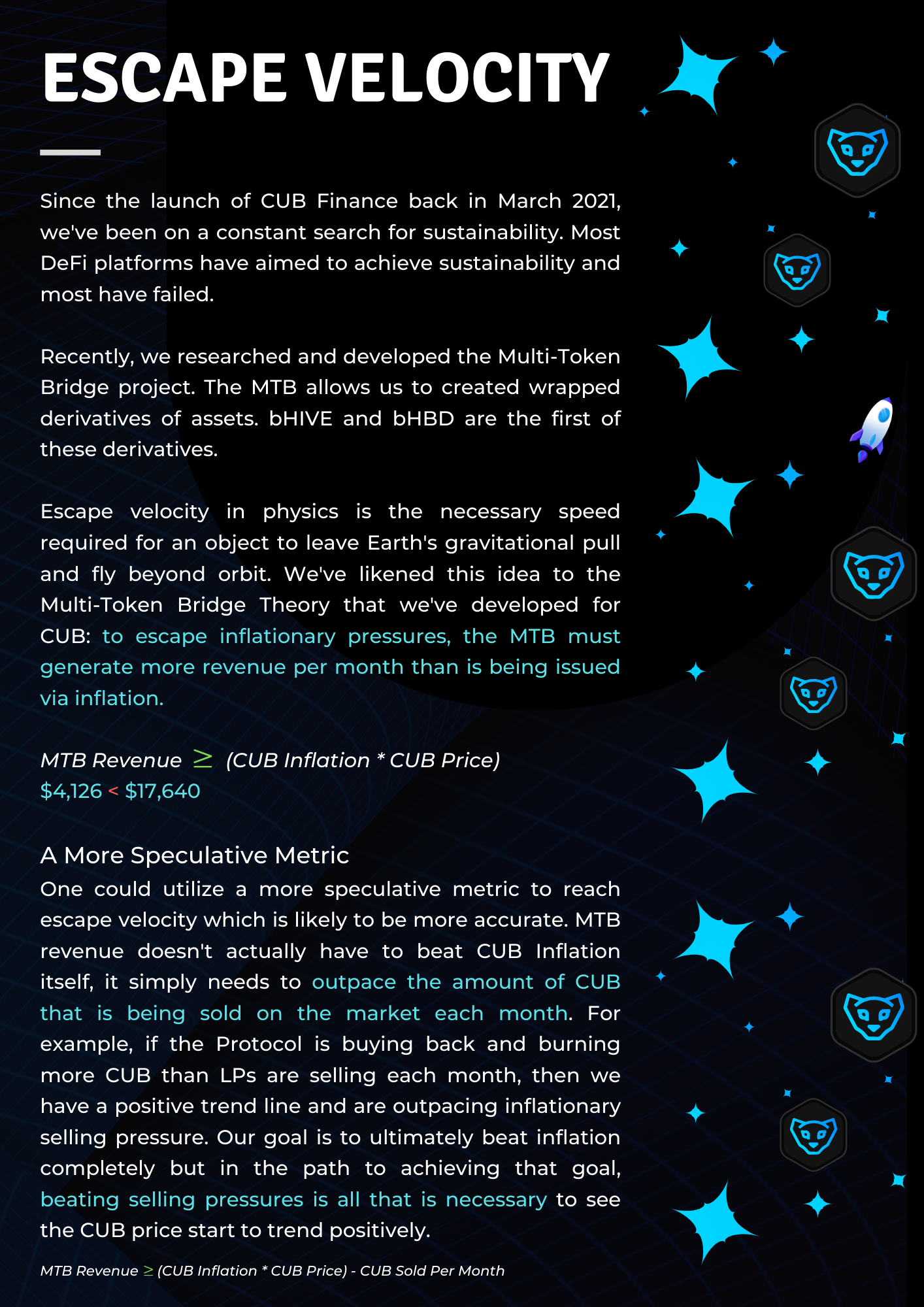 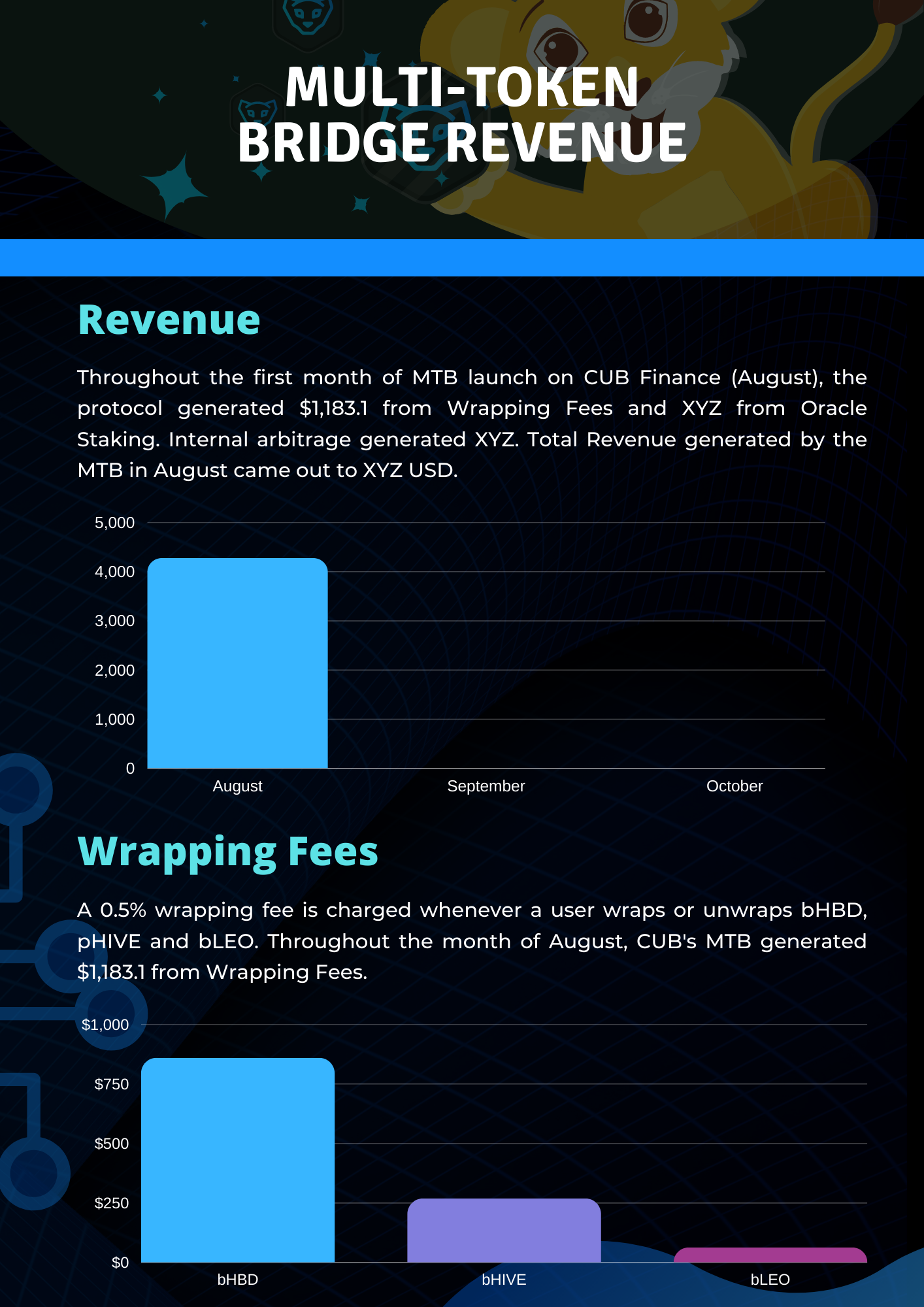 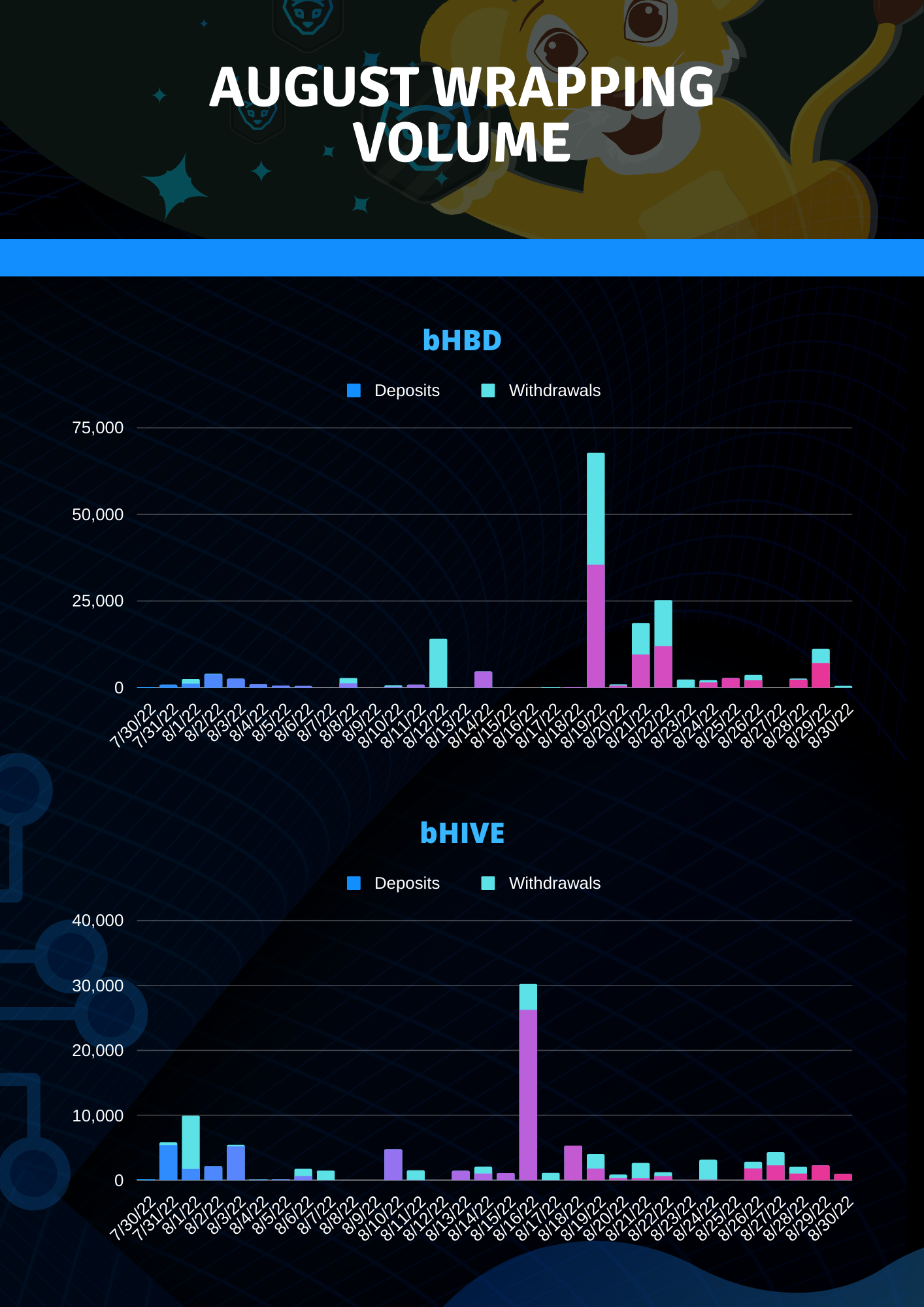 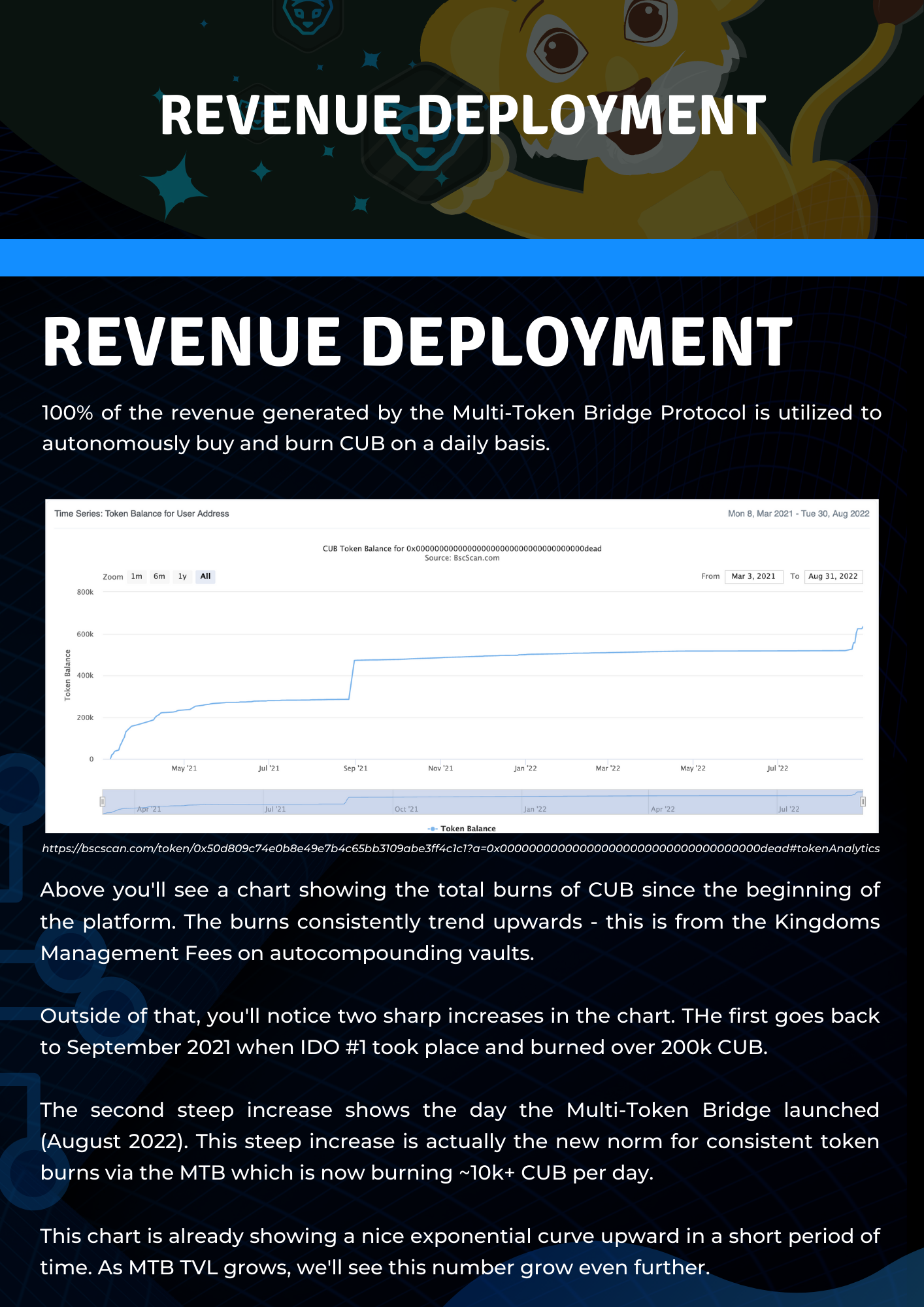 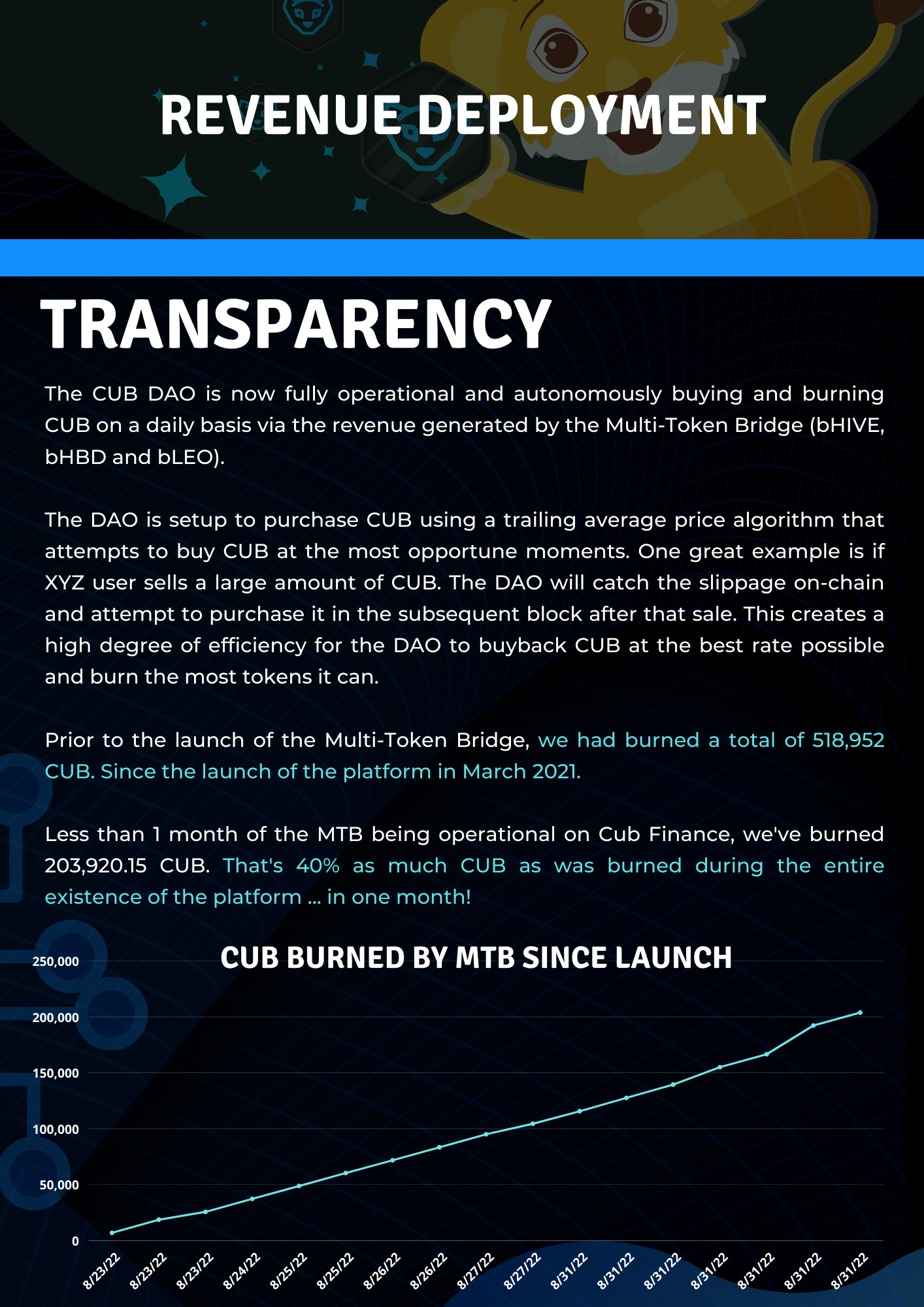 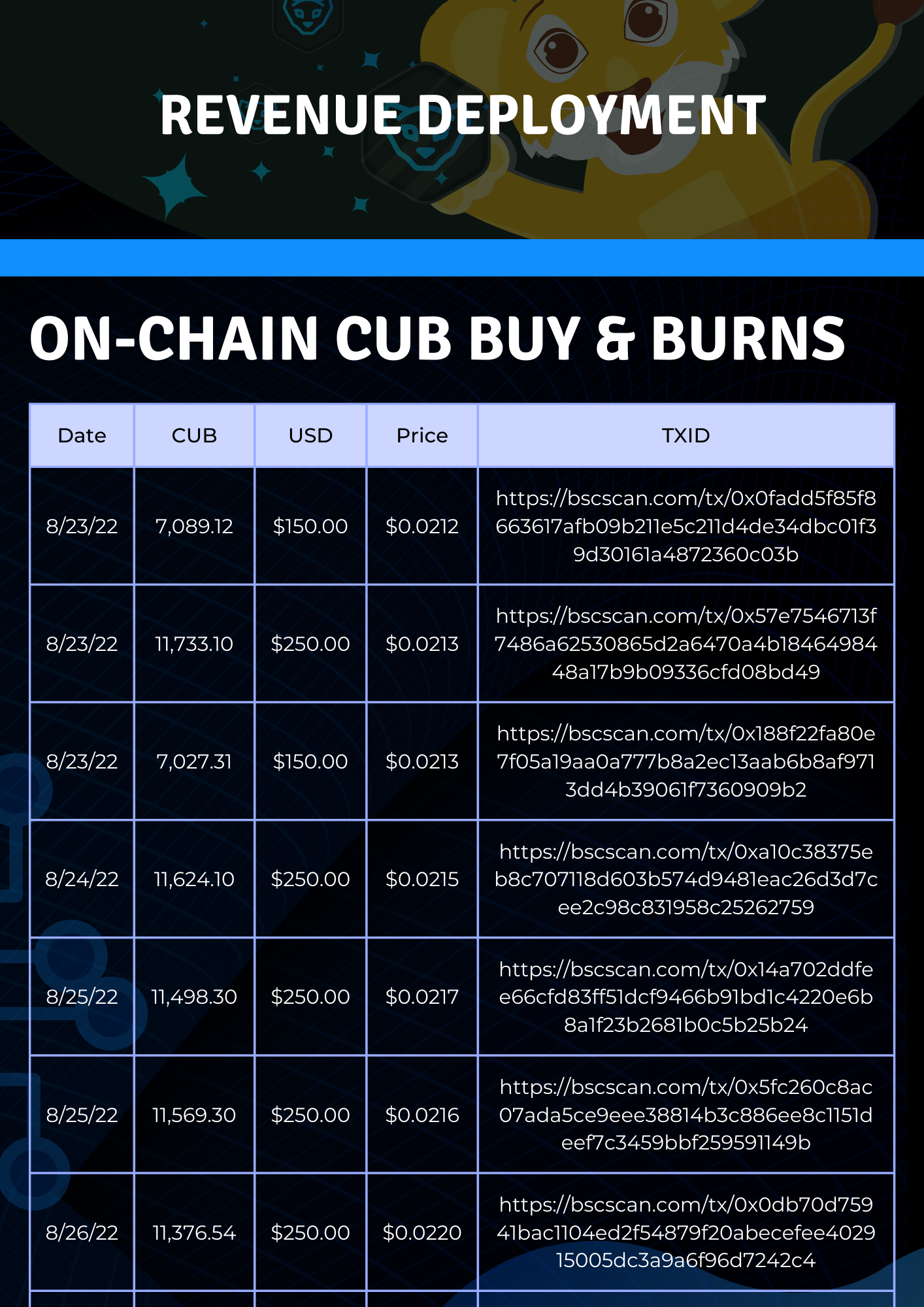 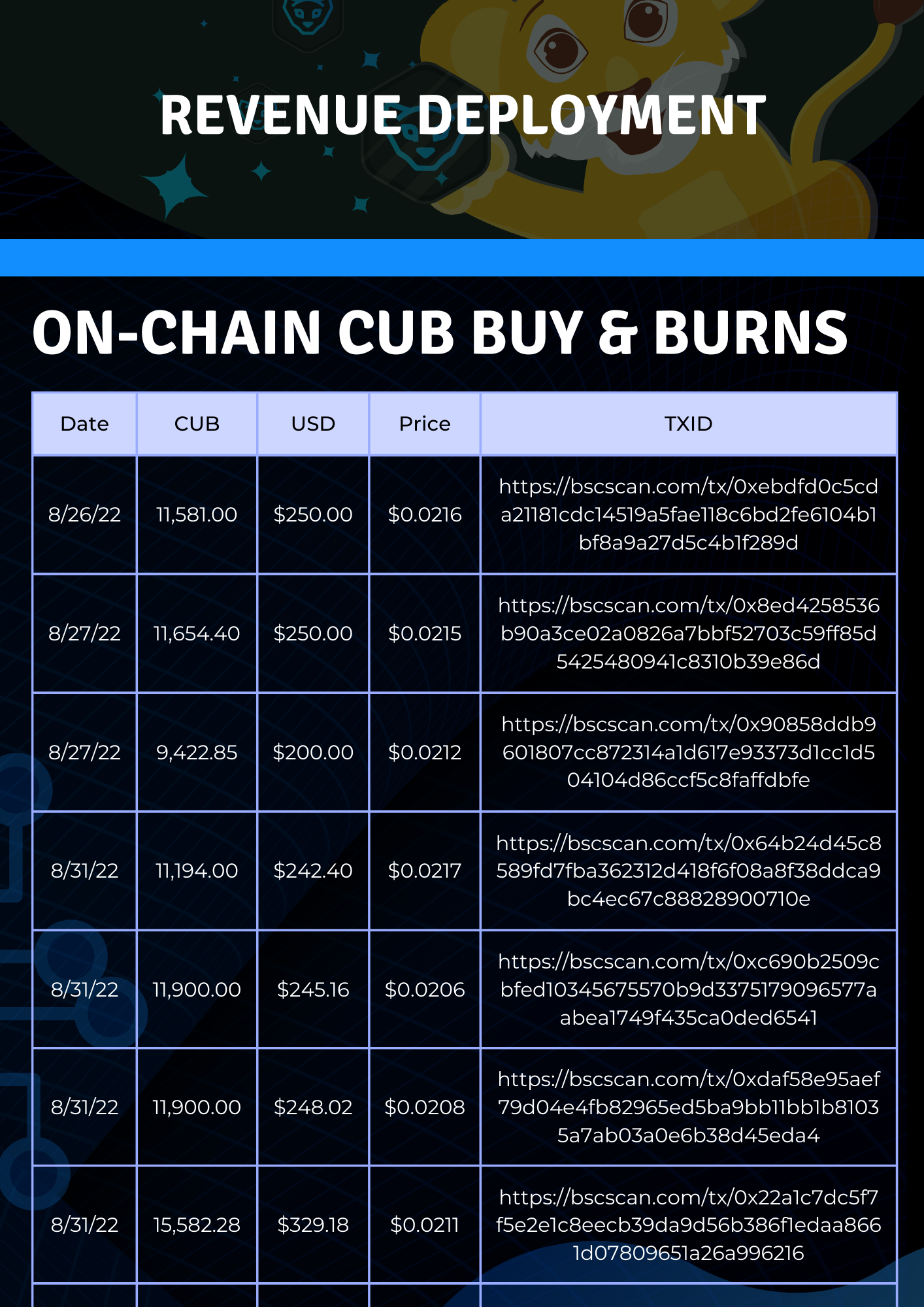 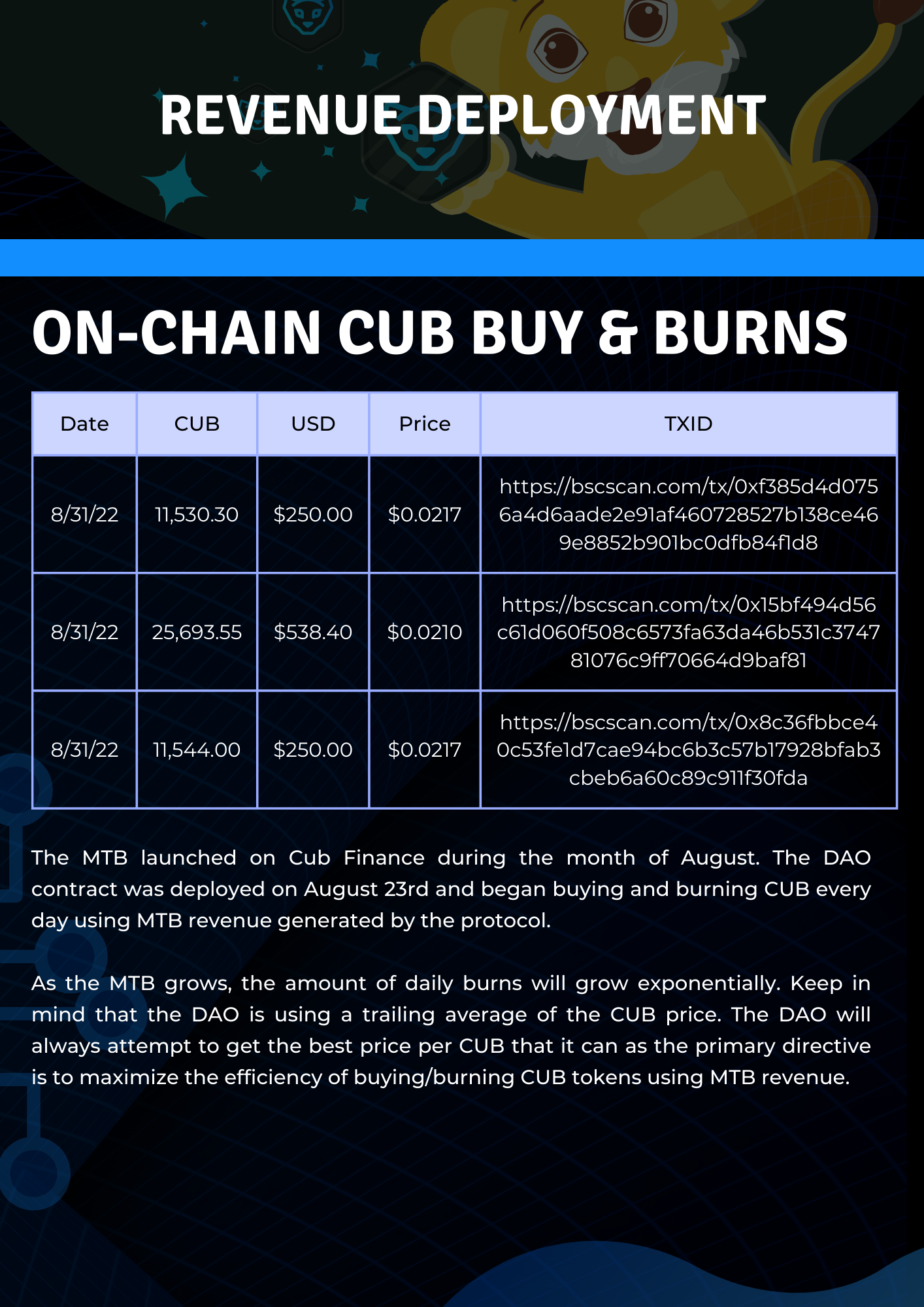 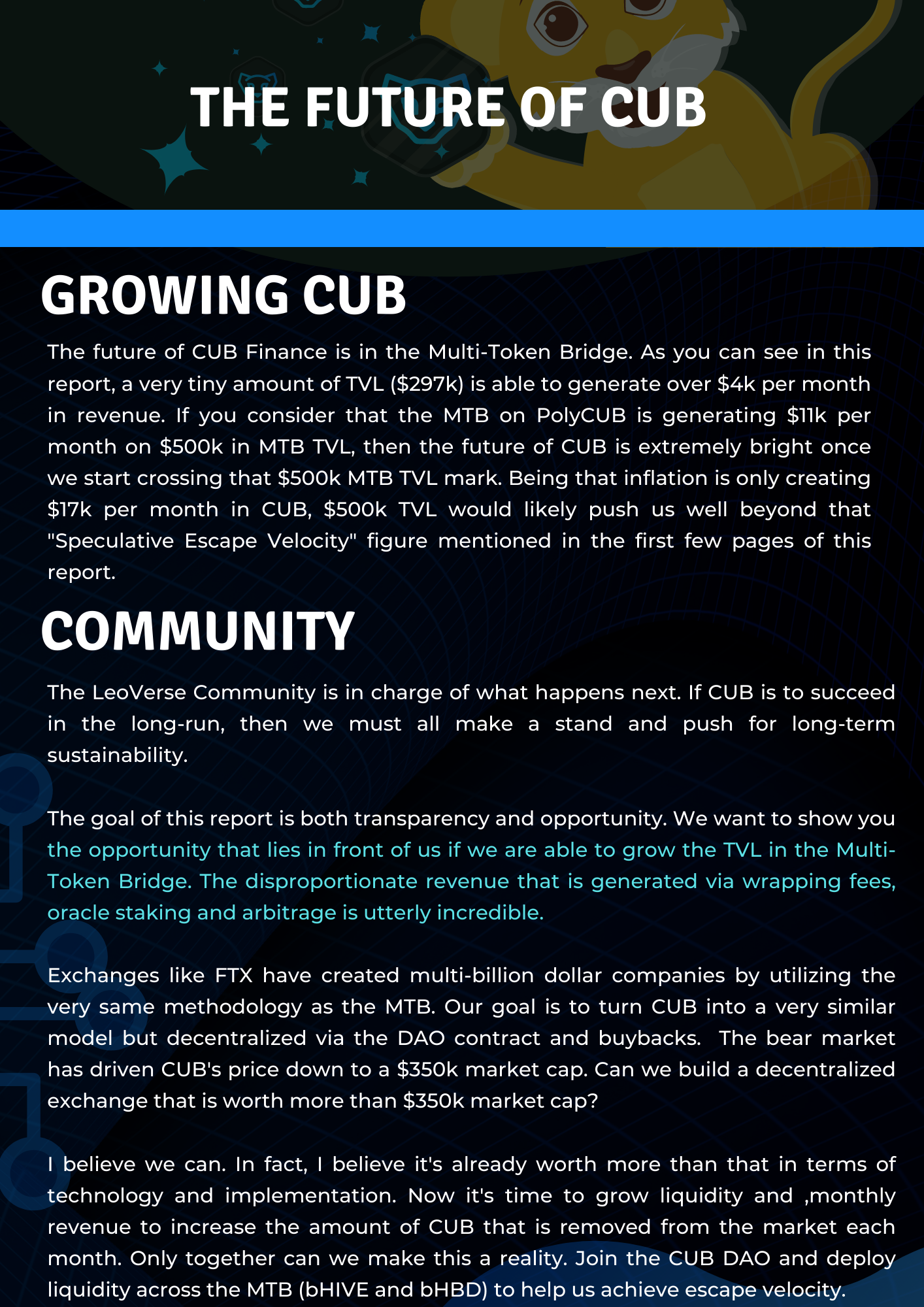 Some items may be cuttoff from the image displays here on LeoFinance / Hive. Open the PDF to get the full view of the report.

Jump into the report for all of the details on how this revenue was generated and how we plan to grow it.

We've also created an "Escape Velocity" metric which aims to predict when CUB will flippen inflation and begin burning more CUB than is produced.

This is nice and a wonderful work to achieve this. 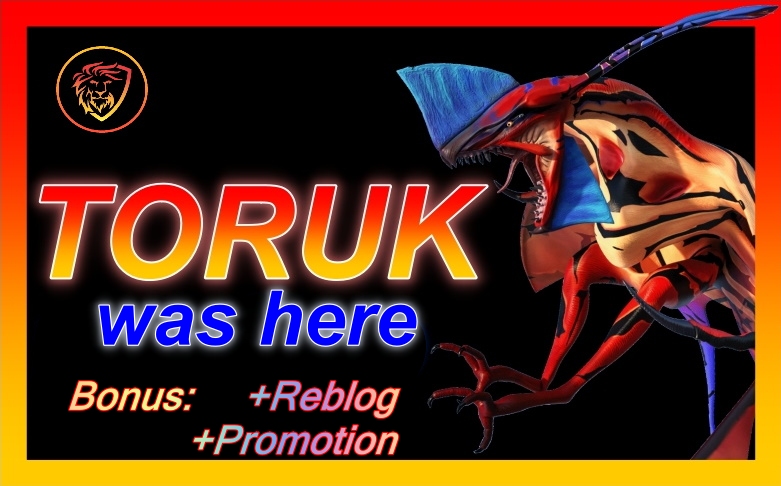 Very interesting approach. We will see which outpaces the other: CUB or POLYCUB.

With the fast growth of CUB through the Leofinance effort, I suggest CUB will be super. Imagine $297k TVL achieved not completely a month.

Yeah it will be interesting. CUB’s MTB pools have been growing far faster than POLYCUB’s did at launch

If we can keep up this pace and get more Hivers providing bHIVE and bHBD liquidity, we might be on the verge of creating the most sustainable (and growing) DeFi platform on earth.

The revenue is amazing on such low capital. If that capital grows at any sustainable rate, the escape velocity is guaranteed to black hole more and more liquidity into the MTB

Very interesting development. Things are gradually shaping us. I can sight the green future with CUB.

This is good news for CUB and I hope it keeps growing for expansion.

Well, now only patience till we reach back the $1

This is a good information.. thanks for sharing

Burn baby burn!!! And let the force from the fire go into the bloodstream of the CUB and make it great once again! More value added to the tokenomics, let's see if the core DeFi project of Leo Finance - CUB Finance - will rule once again. 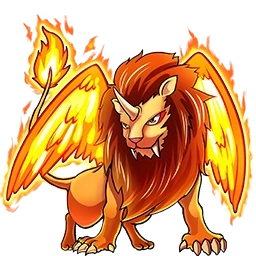 It's nice to see the CUB being bought back and burned. Just wondering, but what ever happened to BNB dividends for the CUB kingdom? I think it was paid out once and never touched afterwards.

This being just the genesis as we expect more great move from cub. Indeed this is a big improvement.

How is a nice doing and getting better growing for CUB. I liked that burning for market of CUB.It can be the best for all users.
I only say that is a great work!
!PGM !PIZZA !LUV

Nice report, gave it a look over. I like how the MTB is central to Cub's roadmap. Decentralizing control of HBD (via bHBD & pHBD) will only help spread risk and decrease individual liability.