@leo.stats 67
about 1 year ago
LeoFinance

Welcome to the weekly edition of LeoFinance stats report.
This is a weekly report covering October 12, through October 18.

If you want to learn a bit more about the LeoFinance ecosystem and dig into the numbers, this is the place to be. 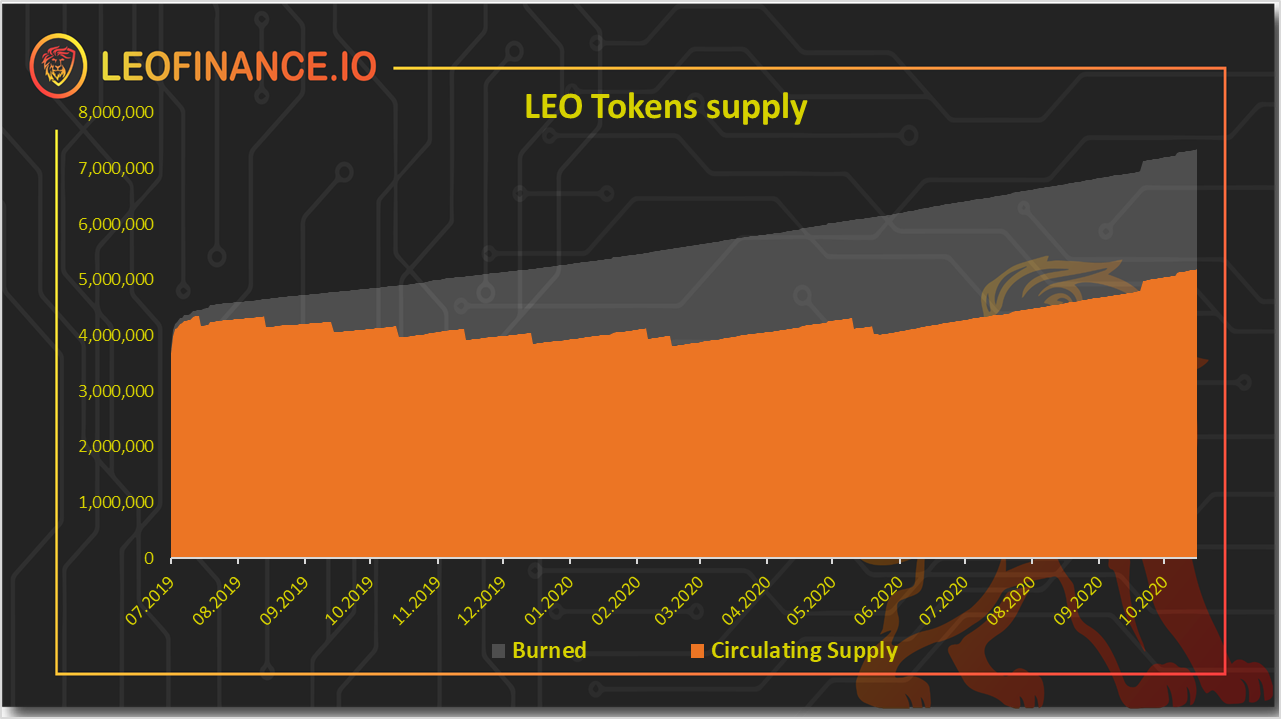 This chart is representing the total LEO supply, circulating supply and burned tokens. 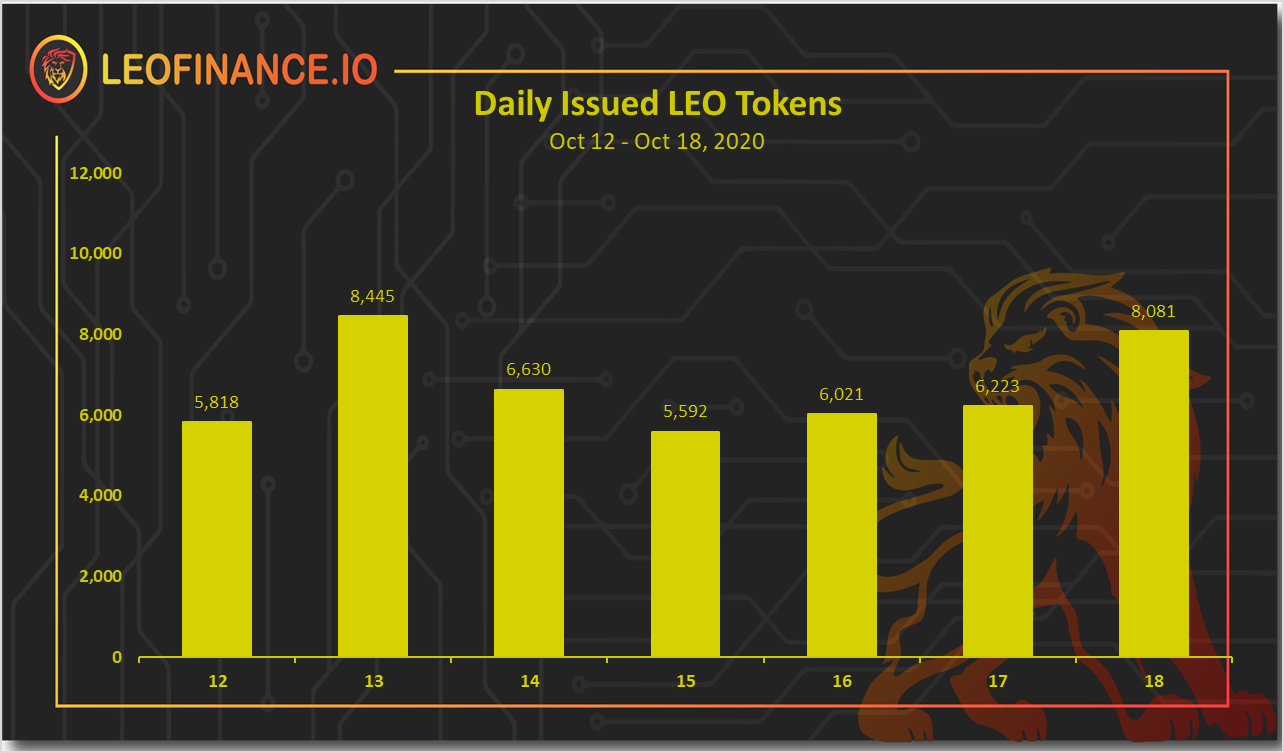 A total of 47k LEO were issued in the last week, or 6.7k on average daily. 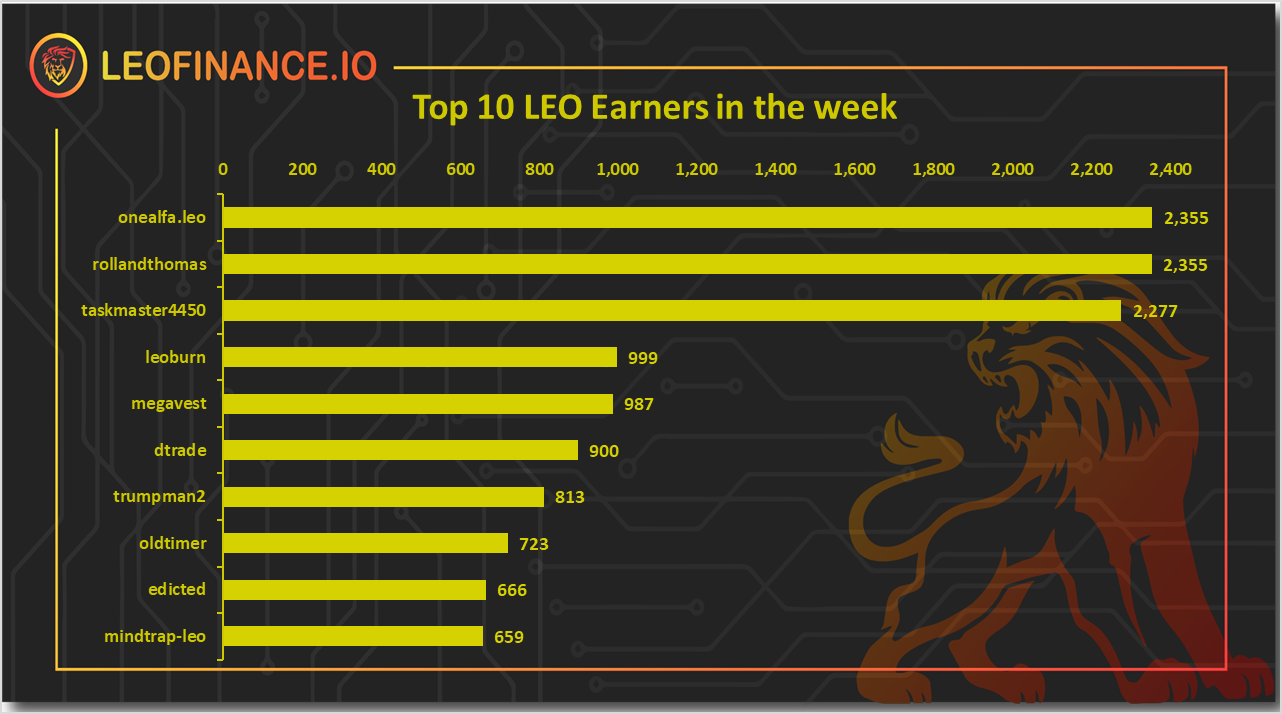 @onealfa.leo is on the top with 2.3k LEO, followed by @rollandthomas and @taskmaster4450. There was change in the LEO curation curve and we can see some impact in the top earners already. 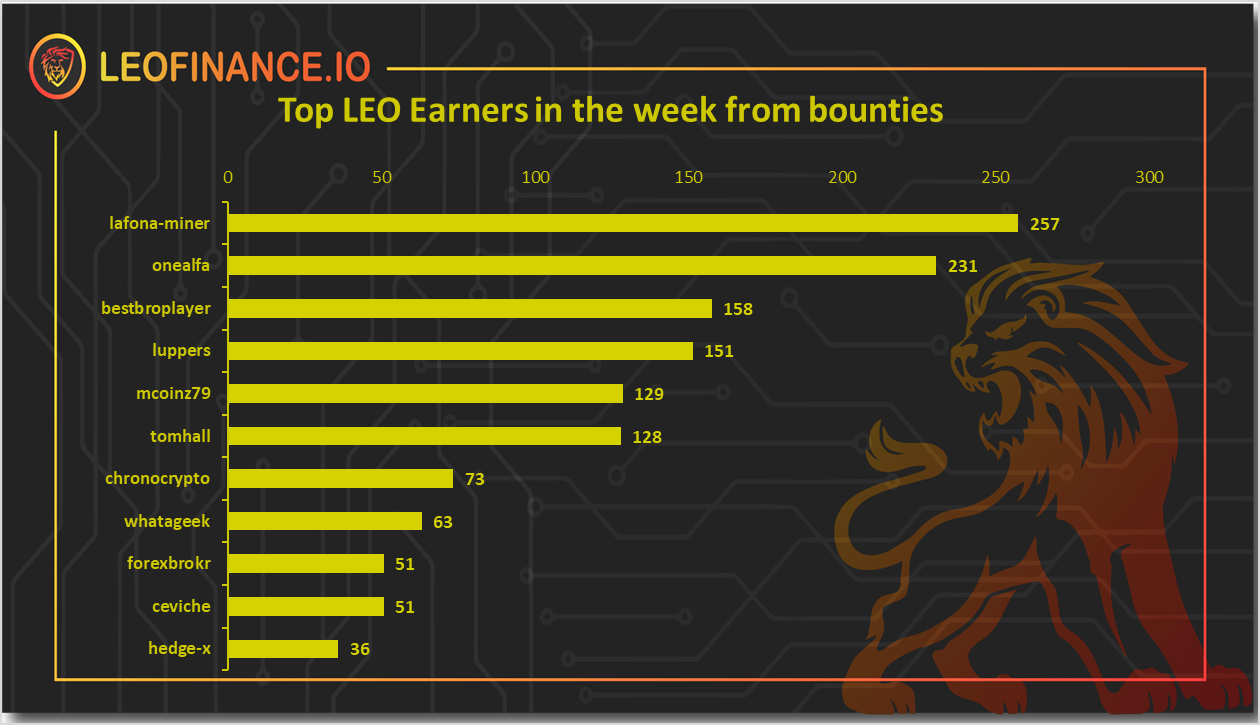 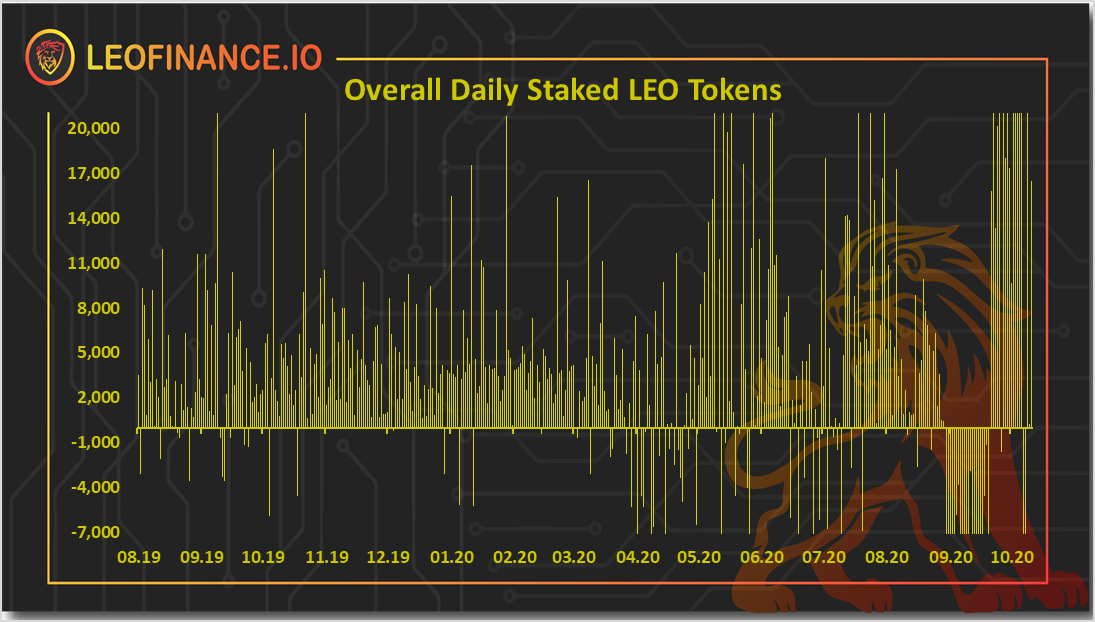 Overall, in the last week the staking has been up, increasing the LEO staked from 3.7M to around 4.2M. A 500k more LEO staked. 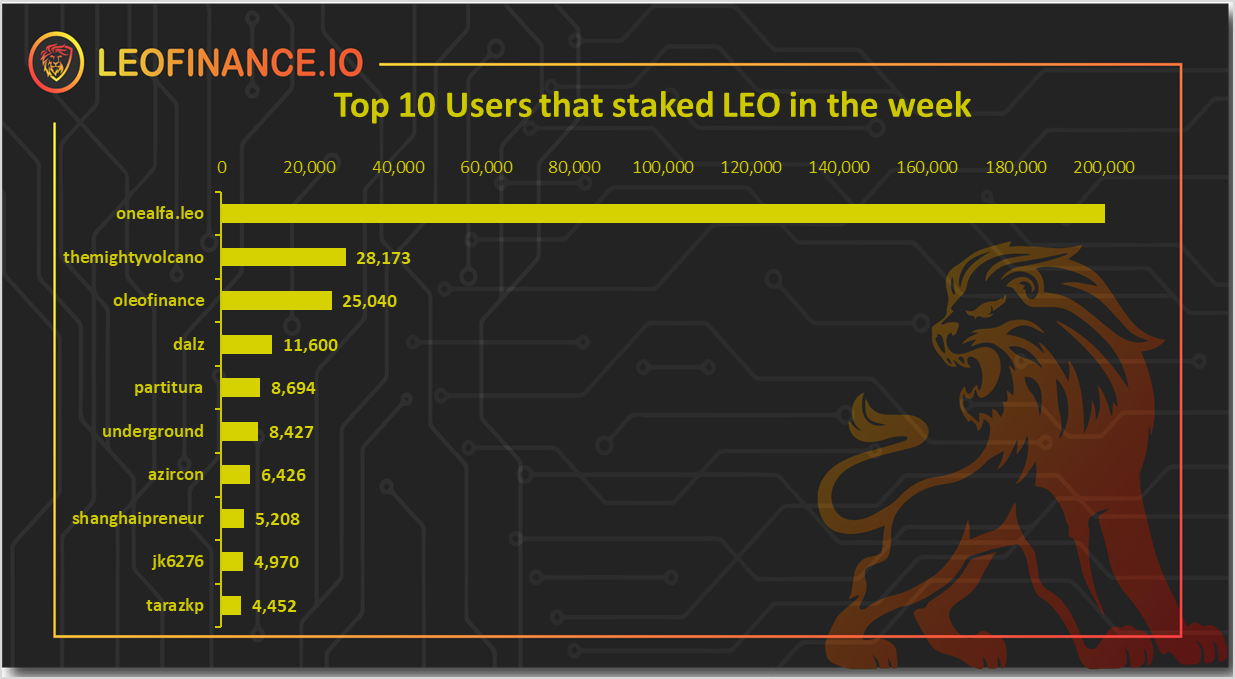 @onelafa has been on the top by staking numbers for a second week. He has staked more than 300k LEO in the last week, reaching overall more than 600k LEO staked on his account. @themightyvolcano is also staking more LEO, followed by @oleofinance and @dalz 😊. 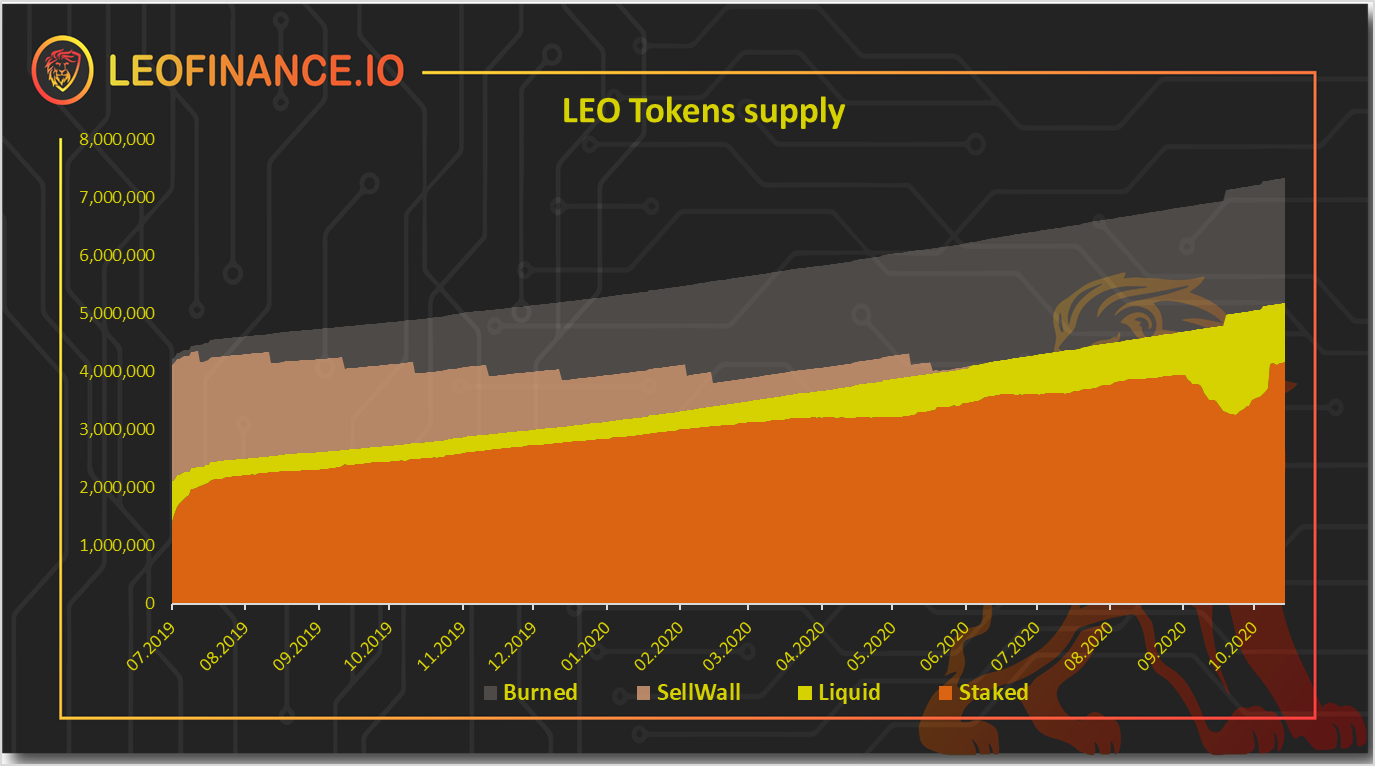 The yellow (liquid LEO) is an interesting category. Almost back to the levels before the Uniswap liquidity providers program. 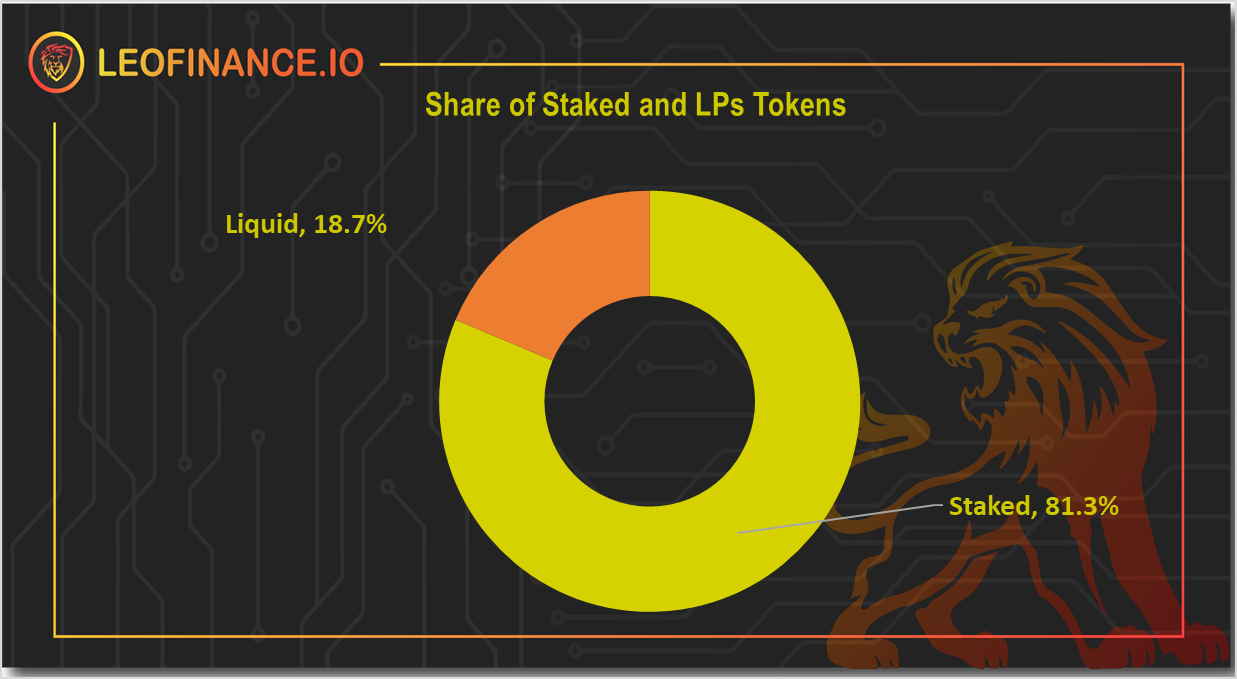 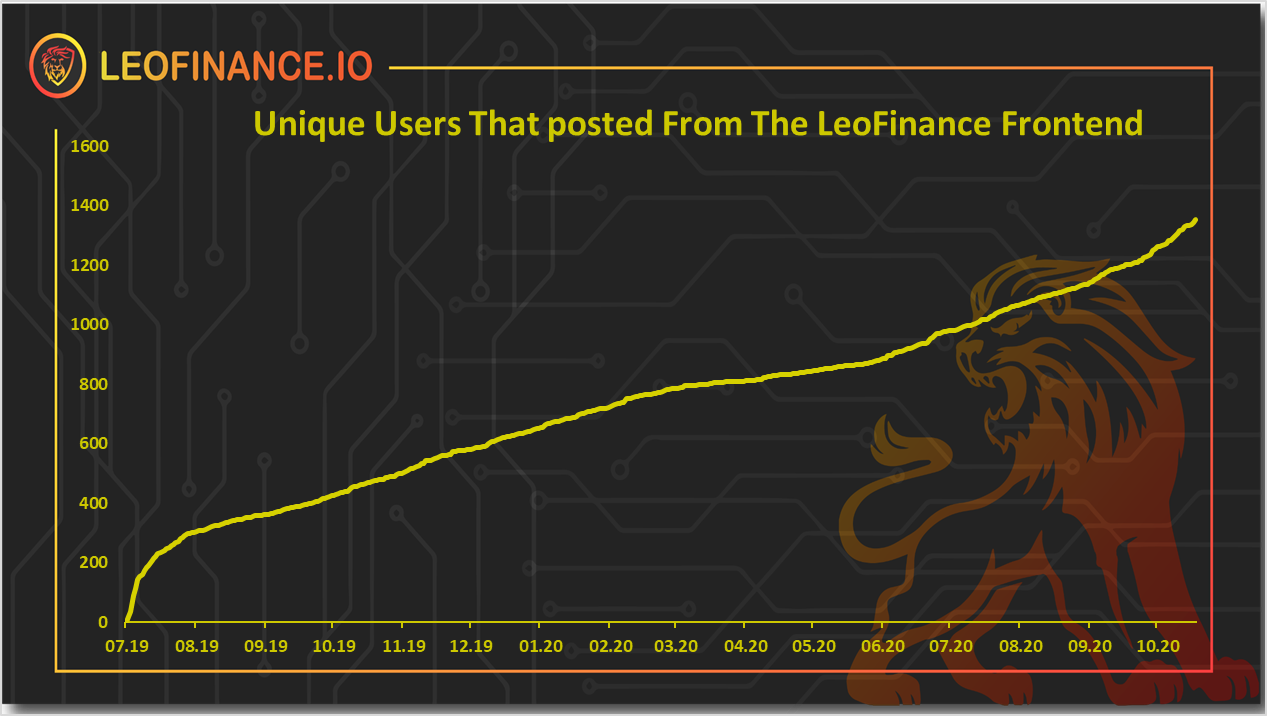 A total of 1353 unique users have posted from the LeoFinance frontend.

In the last period there is an increase in the number of new users.

Here is the chart for the monthly active users that posted from the leofinance.io interface. 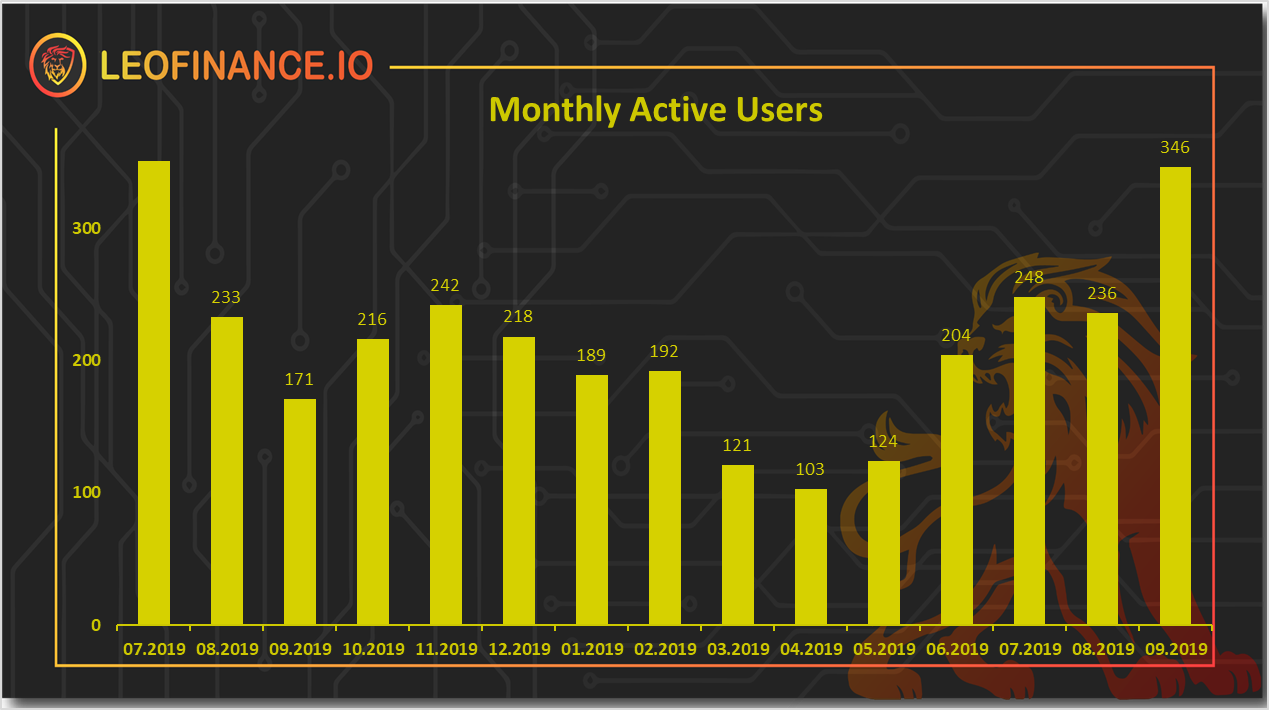 The user growth can be clearly seen from the MAU chart. An increase from 236 in August to 346 in September. 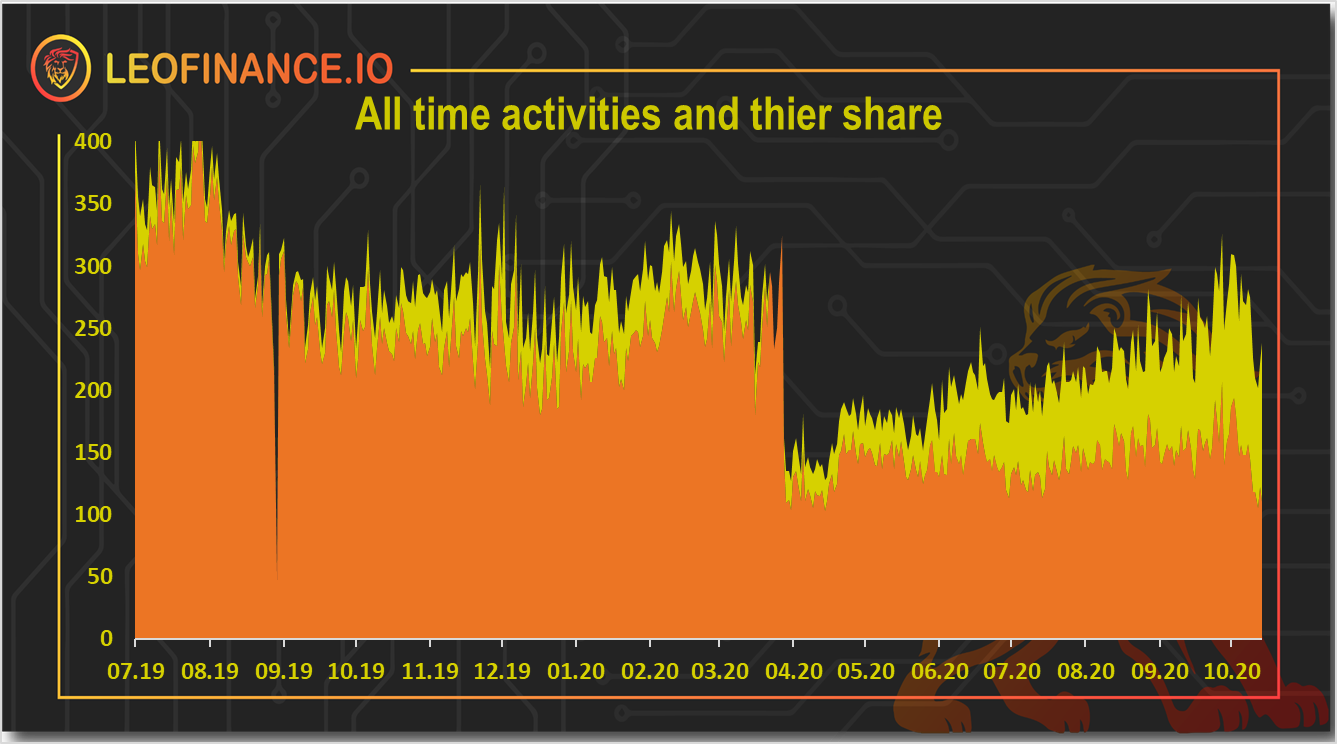 In the last week the HF24 happened and this caused a drop in the number of posts. Although it looks like the drop came mostly for post outside of leofinance.io. 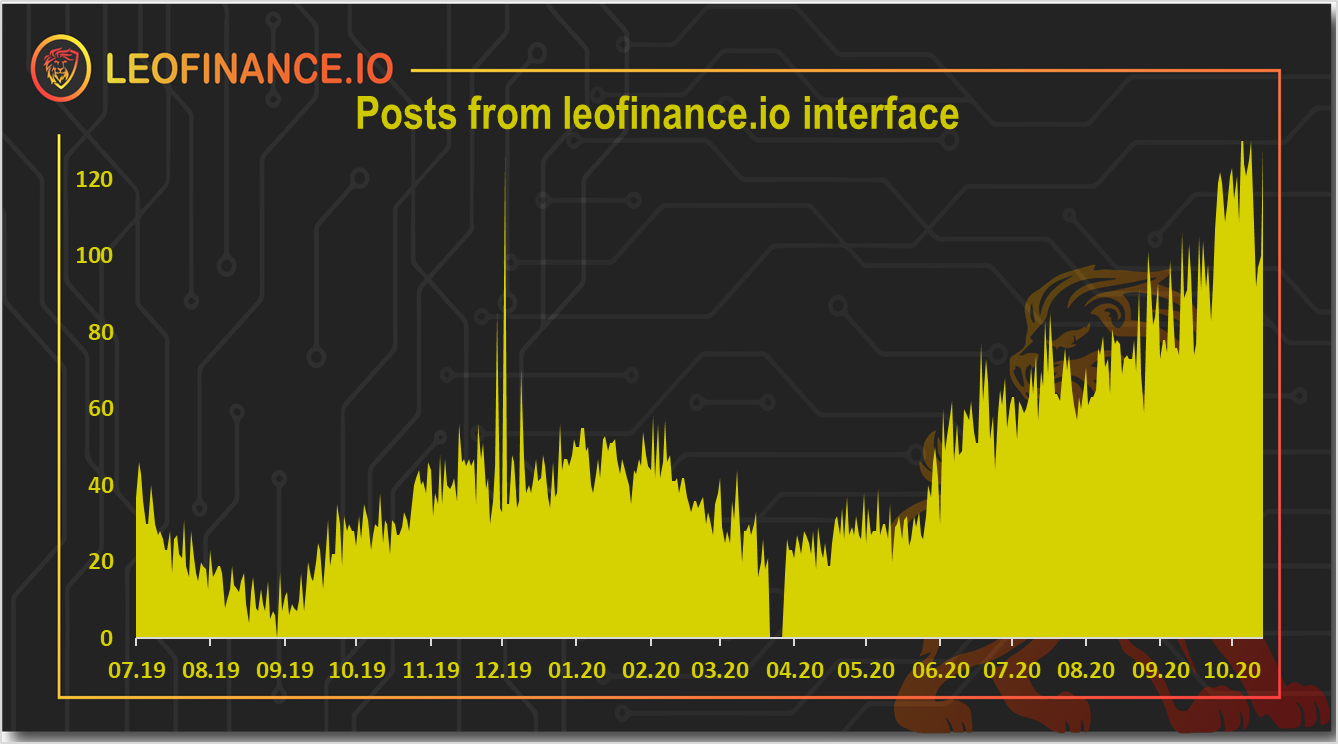 The number of posts from the leofinaice interface is on the rise, and in the last period its above 100.

LeoFinance has introduced a 10% incentive for posting trough the native frontend. When users post from other frontends and just with the leofinance tag they have 10% less rewards.

Here is the price chart in dollar value with average price for better visibility. 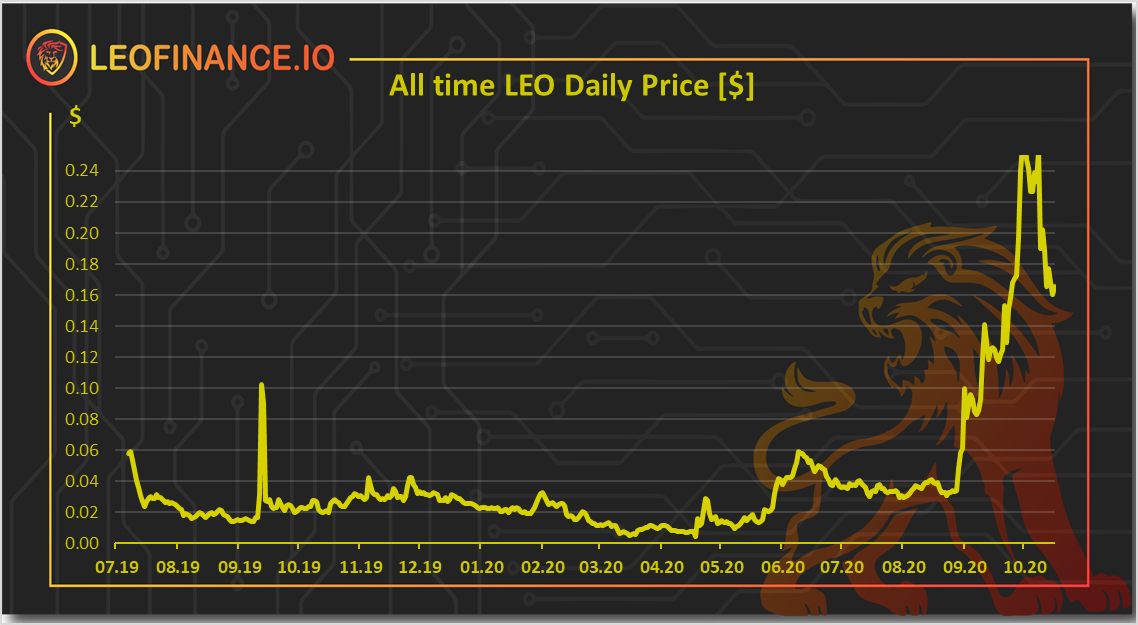 Have in mind the above is an average daily price. 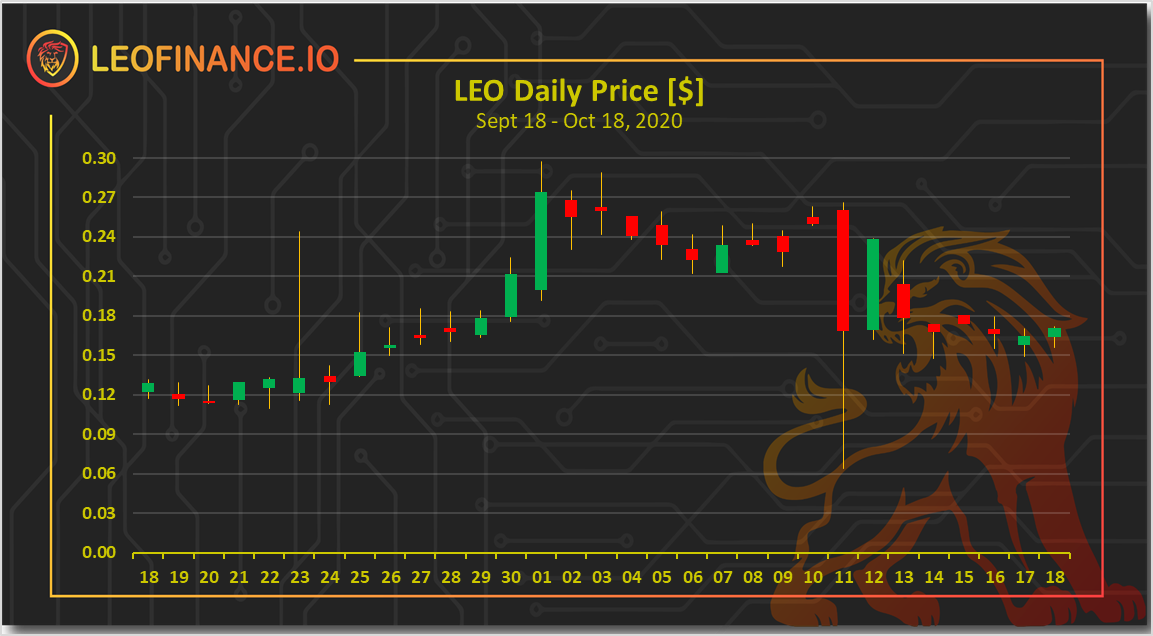 A sharp dip after the hack to almost 6 cents, and a significant recovery to around 14 cents.

In the last week the price seems to be stabilizing around the 16 cents mark.

LOL staking 300k LEO putting the rest of us to shame, how do you even pick up so many coins, how many times a whale is that? My brain hurts

Having a lot of ETH helped a great deal.

That is the key with becoming a whale in one currency, can translate that into whale status in others.

The man is one fire!

I just love the users graph on how is rising to the sky above. Now with LeoInfra that bridged LEO Finance with Ethereum users, I believe we should see a more aggressive increase on that. Nevertheless, sweet stats all over the place (even on the price).

Yes, it will be interesting to watch the users numbers in the following months

Stunning,this weekly report just challenges one to be better and even do better. 300k Leo staked in the last week by one person, that's staggering @onealfa

Given the hack those numbers are incredibly strong.

Especially interesting to see the burn account being the third largest earner!

Yeah it was a down week when you factor that in, yet the numbers are still strong.

Yea I was surprised by the burn account as well :)

Do we have a new species that can justify @onealfa's leostake? Calling him whale or even dragon is an understatement 🤣

That's what I meant. Big is not enough. We need to start adding gigantic as an adjective for those stakes

Big Kahuna...khe-khe ..I like this.
Almost like my old, personal Amateur Radio Callsign - LY2BIG.
Held it many years (before - was UP2BIG) , until changed to superior, shorter version - LY1A My nickname in a real, offline world, between my friends , is "BIG"

@onelafa seems to be all in and the dedicated guy to be able to control the price break up as well. And 81% Leo staked gives a strong signal for the platform. Why don't you increase the post reward if posted from leofinance ? After all, that will increase the traffic which is the soul driver of add revenues.

This LEO is on fire and it's no short of gas... Leaning my head towards all of you who have been using it, stacking it, and earning it for so long, and last but not least believe in it. It's definitely a great project and I try being as active as I can on it.

It is very good to see that LEO remains strong despite the adversities. This shows the determination and unity of the community.

leofinance is growing fast it's hard to keep up

the stats are still looking strong! any news on affiliate onboarding program?

Cant tell for sure, but I think khal has it on the roadmap.
Its a BIG roadmap :)

How do I to get HIVE key?
I am new user of Leofinance by Metamask signed up.
How do I Stake Leo power?
Please!

Damn, that's outstanding! With such an LP, you can live your life just by being a LION!

I was only able to stake 50 LEO whereas people are staking in hundreds of thousands.