Wildpig Pours: Skull & Crossbones Round with a fractional assortment “Black birds tend to like shiny things” ~ The Bloody Raven

With ship repairs underway draining away my fiat reserves, It’s back to the pirate routine and try to clear up some of the the backlog of shiny only to get another huge package from Nyssacat.
Today’s pirate pick is again Wildpig Pours recalling the Easter post of the Seafarer’s Faith & Prayer cross and my silver Flintlock pistol with the Assassin’s creed silver round.
Keep in mind these are of his earlier warm up works, his more recent creations are far better. 1709? “It’s just a number on the original die.” Says Wildpig Pours, formerly California Wild Pig.
Then there’s no harm in checking it as a date, only to find out that the year marked a mini European Ice age otherwise 1709 smacks right in the middle of the Golden Age of Pirates 1650 to 1730 according to Wiki, 1700 to 1725 in the Caribbean and Atlantic shipping corridor as framed by Thoughtco.
As a footnote, three pirate Captains used a similar Skull & Crossbones configuration; Edward England, John Martel, and Samuel Bellamy. ☠️ Next are what appears to be an unfamiliar seal of the US Armed forces? I could be mistaken but I vaguely recall similar pours like this were made by a group of artisans for Memorial Day in support of Veterans. A noble endeavor I say.

In doing some digging around I found it’s original inspiration, it is only a partial imprint of a US Governmental Service lapel pin and not military as I guessed. The original has a lower banner to indicate any Governmental division which could be; Selective Services, Treasury, etc. as in this case Government. There is Fractional, and then there is pull out the magnifying glass for these tiny 1-gram skulls! “These are hard to make, but fun.” Replied WPP.

I could best image is a dozen or so of these tiny skulls poured in trees for each pour. Snapping each off, filing down the flashing, burnish by hand or better yet with a Dremel with a polishing wheel, toning by hand, then with a steady hand stamping each on the back without the skull flying off in some direction. One could lose a few at this final stage.
He must be passionate about this craft if WPP still found it fun after making say … a painstaking dozen? The ability to make change is a long practiced one to avoid overspending on a product and service one does not need. At times Pirates did break their 8 Reals into halves, quarters or even in eights for transacting for low value goods.
With that Spanish 8 Reals, you may end up buying drinks for the house.

Today, with a reasonable chance of a disorderly economic reset, preppers and stackers accumulate some Constitutional silver coin as a ready and suitable emergency currency as the economy transitions from the old to the new system.

The ability to make change means the difference between building the wealth for a pirate and being a poor pirate! ~ Bob the Pirate, author of Rich Pirate, Poor Pirate.☠️

With a Silver Flintlock and Assassin’s Creed Round Here’s one score I missed! Perhaps another time. “I save in silver, gold and Hive!” says the Bloody Raven, how do you save?

The #piratesunday tag is the scurvy scheme of Captain @stokjockey for #silvergoldstackers pirates to proudly showcase their shiny booty and plunder for all to see. Landlubbers arrrh… welcomed to participate and be a Pirate at heart so open yer treasure chests an’ show us what booty yea got!

Instagram; wildpigpours
And a special Thanks again to Nyssacat373 for the silvery gift. 💋
Cameo Raven Broach from The Black Wardrobe

My own pictures shot with a Samsung SM-A530W
P. Image under Pixabay
W. Wiki Commons
💀 Page Dividers by thekittygirl 🎃 With ship repairs underway draining away my fiat reserves,

What a fun way to look at it! lol 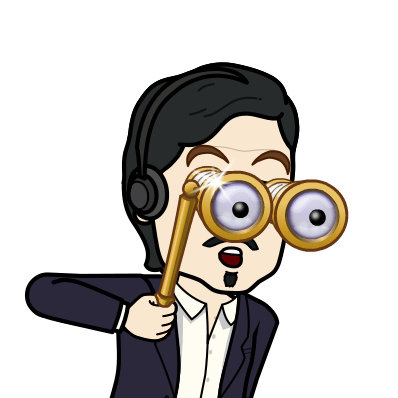 They are some good-looking silver pieces.

Aye, 'tis only fiat and I won't sell any of me precious gold and silver treasures just yet. At least the ship is mortgage free and I have sufficient cash flow to accommodate a wee balance on me unsecured Line of Credit.

Steady as she goes Mr. @tbnfl4sun 👀

It is really lovely and nice

Very nice and unique! It wonders me, should we come back to silver for purchasing, just what folks will do should they need to make change if they don't have fractional silver?

A very offering! Thanks for sharing @kerrislravenhill - have a lovely day!🤗💜🌻

I had a few friends that traveled to a Latin American country in the throes of an inflationary upheaval. They purchased some goods at a store and in change they got a few fistfuls of hard candy rather than worthless coin.
Any transaction is negotiable so far as both parties come to an agreement and I can presume that different customers are willing to spend so much for settled equivalent value in products and services. Buy, trade, or barter, its all part of the free market.
If the Buyer has only 1 oz coins, he or she may need to be flexible especially if goods are in scarce supply.

I think bartering would and will be a good thing. Plus, it's tax free, lol! Take care sis!🤗💜

I've actually bartered a small 5 oz bar for a product before, you are correct that it's there is no tax.

I'm glad to hear "Ship repairs are still underway"🤗
Did Wild pigs produce a replica of a US Governmental Service lapel pin?

I believe the US Government likely contracted someone else to produce the official sterling silver lapel pins and that Wild Pig got the mold pattern from a third party that used the pin as a template.
At this point, I am not sure that he is aware that the design is under the US Government property.

Ooops.....😬🙄
Into the Silver stack it goes!😇
Enjoy your week @kerrislravenhill !😀

What fun!
Very well sis... I'm glad the repair in your home is ongoing! That is an accomplishment by itself.
Talking about Constitutional Silver, you know that I always buy them. But my gosh, I used to be able to buy them for cheap! Circulated silver Canadian coins have hefty premiums for the last year. We know that the Physical metals market is the real market and not the crookedly run derivative based commodity market. I'm glad to have real gold and silver in my possession.
I'll find ways to afford more even if I have to return to collecting beer cans for their deposits.


Why did the farmer dress his pig in an apron?
Pretty soon he would be bacon.
Credit: reddit
@kerrislravenhill, I sent you an $LOLZ on behalf of @stokjockey

A drink on me, to yea health @stokjockey
!BEER

Hey @stokjockey, here is a little bit of BEER from @kerrislravenhill for you. Enjoy it!

Beautiful piece the one with the gun on it is really cool, and the little gram skulls are pretty neat too, also you won the engraving contest more information on that in my recent post

Wildpig made me the silver flintlock pistol a few years ago along with the Assassin's creed Unity poured round. I just got the new Assassin's Creed minted round recently too.
I did? Cool! I must have missed the message. I will check the post out later.

I find the coins with the skull quite cool. Getting to appreciate precious metals this days. Thanks for sharing

Poured Pirate themed silver is a niche collecting silver product that you would pay a much higher premium for the maker to get a reasonable return for their labor.
I call it the FUN PREMIUM that I pay for a fun piece.
If you are new to Stacking Silver, your most cost effective strategy is to buy periodically lower premium generic silver rounds and bars.
Collecting replica Pirate silver is a specialty. ☠️

Ahoy, thanks for coming aboard @maro1

Those are my favorites 💀🪙☠️

A nice selection of Silver. It has steady on the coins, so much meaningful !

STEADY is a fine round I have yet to get.
It implies a reminder to Stackers that the most sensible way to Stack is to buy on a consistent and affordable basis rather than buy or sell in a panic. I used to keep some cash aside for a special silver when an opportunity appears, but now I have expensive repairs to pay for well into the Next Year.

These coins are different and exotic.

Poured Pirate Silver is a specialty Stacking category that cost well above most premiums. In my mind it is fun to have but it is not everyone's tankard of rum and if I have to sell it the refiner/buyer would pay below spot price as this silver is categorized as junk even though it is 999 FS.

i save everything lol but i do love me some silver

And I don't really know why I saved the bubble wrap that my poured pirate silver came in. I don't plan to sell any pours. 🤔Time to put that into recycling.

Pirate Themed silver coin collecting is a part of my Silver Stacking and I do collect certain coins. Thanks for dropping in @penyaircyber

I don't comment too much on coin posts but damn, this one really wanted me to get into coin collecting man

I noticed you are holding some Leo Power, so here's a few Leo initiatives you might want to check out!

Amongst my fellow #silvergoldstackers I specialized in collecting Pirate themed silver coins. A few are genuine specimens recovered from known wrecks while most are replica, fictional or fantasy coins made with 0.999+ Fine silver. This is my MK Barz Collection Treasure chest ☠️ while in the comment above this one I put up my Pirate Booty Bank Treasure chest. I have several more.

You may have noticed my 150 Liquid Leo, even after 3 months it took me to save up 130 for this months LPUD and I still had to buy another 20 Leo to meet the minimum. Tough audience here in Leofinance but I am finally set to do a LPUD. 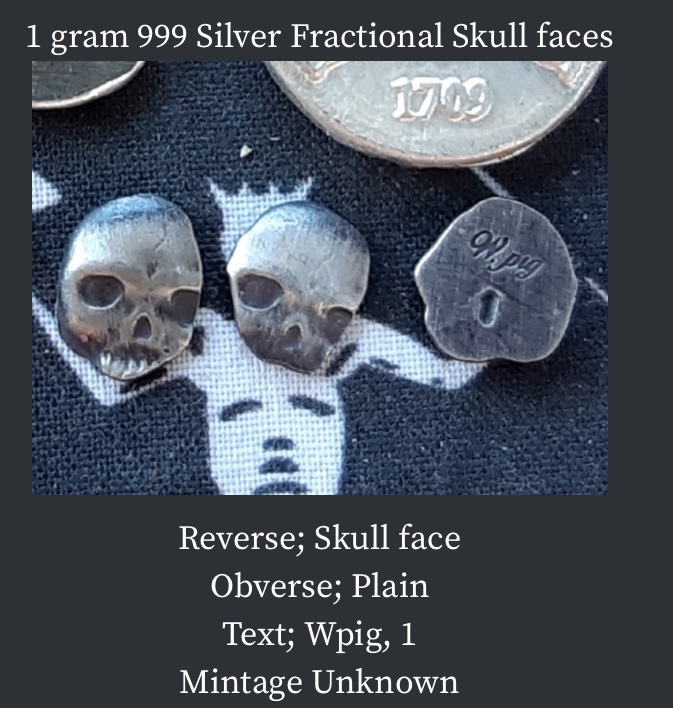 Seriously though! Love those skulls 💀

On another note these markets 🙃 There not here now but at my uncles bunker. Just got the receipts 😂 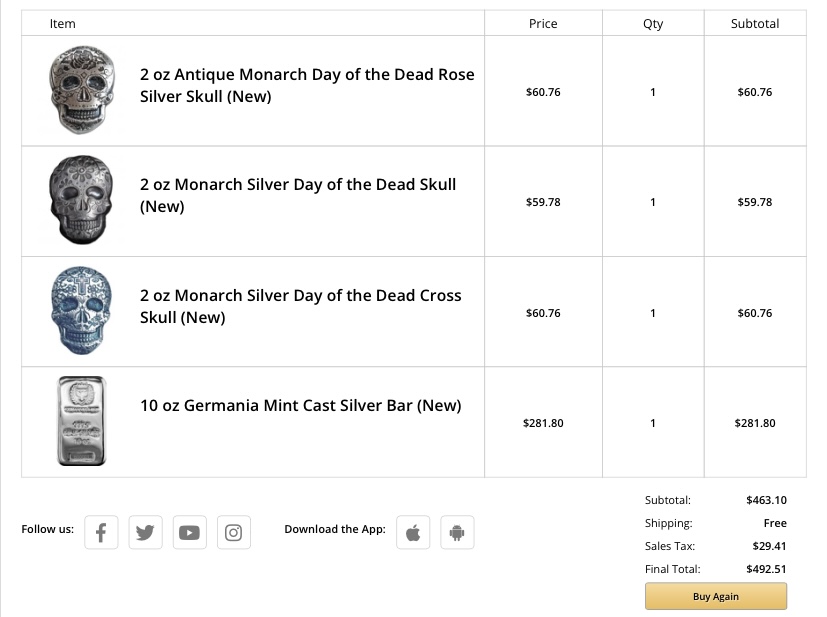 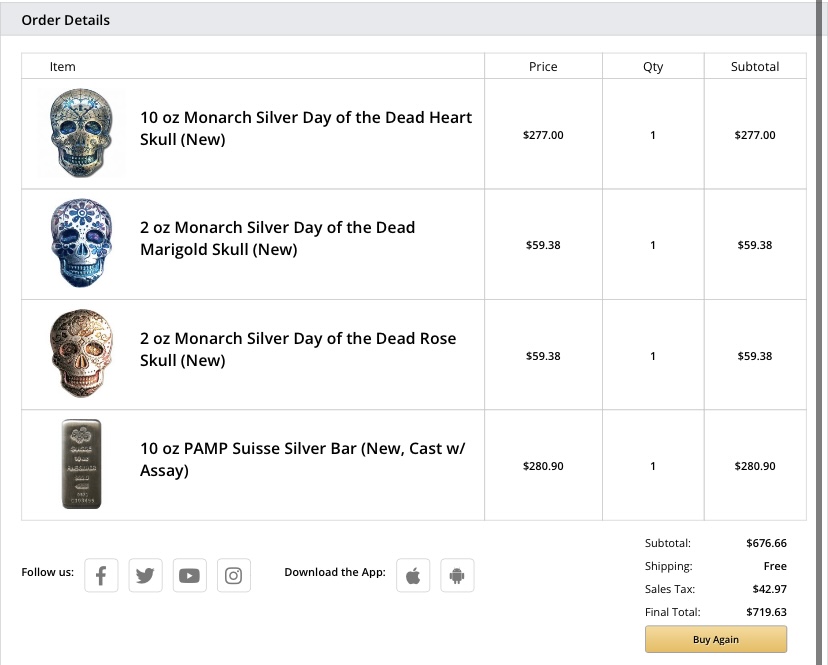 Hey @geneeverett, here is a little bit of BEER from @kerrislravenhill for you. Enjoy it!

You could say that I get a kick out of the Horror movies genre.
Thanks for coming @temileke
!PIZZA

Whoa, there's got to be more than just this, gearing up for Halloween?
I know I know, there's your method to your madness.

Yes, there is.
!BEER

Hey @punkysdad, here is a little bit of BEER from @kerrislravenhill for you. Enjoy it!

Congratulations @kerrislravenhill! You have completed the following achievement on the Hive blockchain and have been rewarded with new badge(s):