Where Are We At? Still On The Safe Side?

@erikah 79
about 1 year ago (Edited)
LeoFinance

When the correction started this week, I decided to stay away from voicing my opinion about it in here. It's better to see how things stand instead of jumping to conclusions.

Corrections happen all the time and are needed. Is this a healthy correction? Is this manipulation? Does Evergrande's collapse has anything to do with what's happened in the crypto market?? These are all interesting questions, would be great to know the truth, but at the end of the day, the only thing that matters is how you are able to preserve your capital and what can you do to profit from this situation and any situation in general.

Traders usually are trading the market both ways, with much or less success. Investors are in a different situation as investments are (usually) long term, so obviously the strategy they have are very different.

Just like everybody else, I've been following the news to see where this is going. Twitter has been burning literally, everyone has been tweeting and we've got to see once again (not that it has been necessary), what it means to listen to random people blindly, without DYOR.

If you look at the charts, what's happened is not unprecedented. These corrections happen all the time and you can count on the chart how many times it has already happened. However, that doesn't mean people are prepared and protected.

The most painful to watch is when you see people in need jumping in, investing their last penny in crypto, hoping to 2x, 5x, 10x it, to then make ends meet and later to change their lives just to find out their investment just halved or even worse. Then asking help from those they think are more experienced and ending up subscribing to a group that sells you info you can get for free.

Losing money in crypto is something you can't avoid at the beginning and maybe later either as volatility can create situations you're not prepared for. There's no trader with 100% success rate. However, risk to reward ratio must be reasonable and again, preserving your capital should always be your number one priority. Otherwise it's just a gamble. 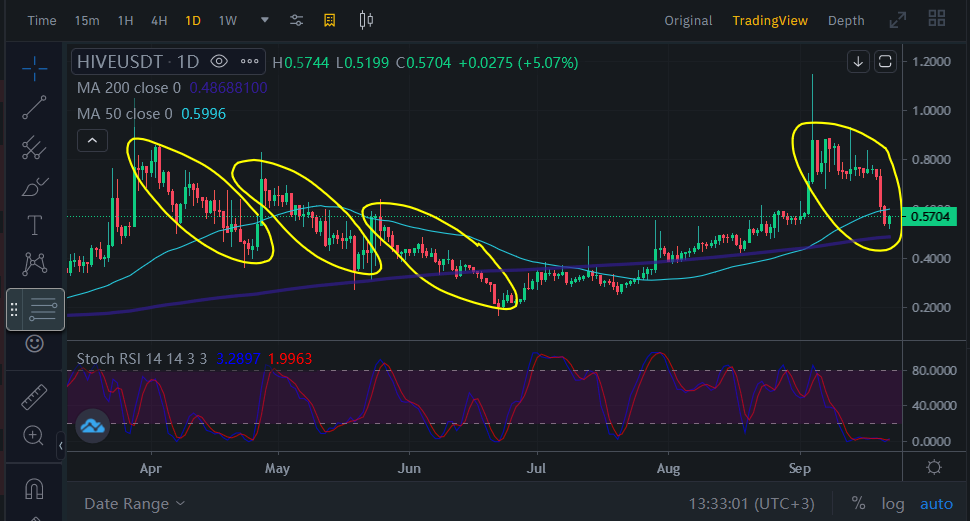 I've been following HIVE's market evolution for a few months now. I know, it sounds strange and you may ask what the hell have I been doing till then, to which the answer is, I've been accumulating, without caring about the price.

I've been proud of HIVE as it's been holding pretty strong lately and even when the correction started, it seemed like our coin is bullet proof, till it didn't. Unfortunately HIVE took a hit as well and we're back to the $0.5 - $0.6 range we've hoped to leave forever.

Chart-wise this is normal as we haven't had a correction since June. Obviously I'm not an expert, but that's what the chart shows me. Better now that come back again from $1 or higher.

To answer my question, where are we at or still on the safe side, in my very humble opinion, we've never been in danger. There's a strong project behind HIVE and an even stronger community. We've come a long way and we've been through a lot of 💩 and we know how to defend ourselves and what's ours. 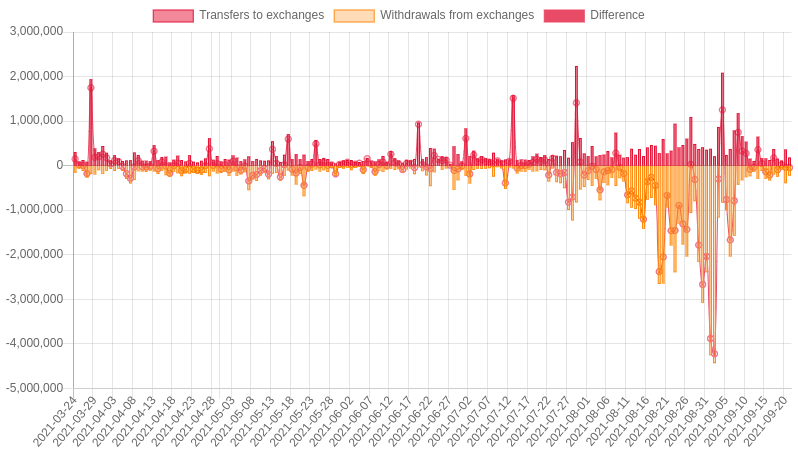 Daily HIVE Transfers from and to exchanges

If you look at penguinpablo's stats, new account creation is on he rise, Splinterland is leading and driving new users to the chain constantly.

The chart above shows HIVE transfer from and to exchanges has not sky rocketed. I know many have been preparing to sell toward the end of the bull run, which is delayed now, on the other hand I guess just as many are prepared to buy as well. If the plan works, then more HIVE will be taken off the exchanges and powered up, which can only benefit the chain.

In the meantime we sill have our earning possibilities by posting, curating (which sometimes is overlooked), participating in DeFi and in investment projects we have on Leofinance. 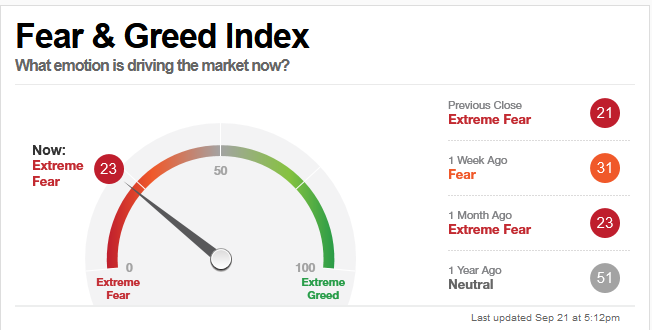 So two days ago, when the news about the Chinese giant broke out, everyone in the crypto world was waiting for the Fear & Greed Index to update, I was wondering how our HIVE Fear & Greed Index would look like if we'd have one. It would be nice to have one and check from time to time how we stand, but I don't think many were worried about HIVE.

I see people chasing crypto gems, hoping to 10x, 100x their holdings. One of the most famous new gem (so they have thought) is DOGE. I may face some criticism for comparing DOGE to HIVE or vice versa, but if you look at the charts, you can see which one is in a better position right now.

I remember many were replying to Elon's tweet, hoping he'd endorse HIVE and we can benefit from it. Well, we don't need Elon Musk, we have a better plan, that is working well, as the attached chart shows. Elon's tweets are not affecting us and we can hammer out our way on our own.

I'm repeating myself, I know, but I'm damn proud of Hive! You can't go wrong with it!

I think Hive has a bright future and I would love to be an early adopter. Before I start making a full-time income from Hive, a base needs to be set. So let's keep stacking, creating, commenting, and have fun.

You accumulate, no mater what :) I've been accumulating for 3 and a half years and only started taking small profits after 3 years, so I can have a strong base.

I don't know when you've registered, but compared to those that are yet to come, you're an early adopter.

Awesome, you are a veteran. I registered and started from the ground up 6 months ago. I think in 3 years' time, I would be able to extract a decent income from this. A man can hope and work towards the goal. 😉

For now, I will accumulate as much as I can. Bullish on HIVE, LEO and CUB. ✌

For now, I will accumulate as much as I can. Bullish on HIVE, LEO and CUB. ✌

That's the only way to succeed. Accumulate till you have enough to earn enough passive income of it :) Otherwise you will never be free, being forced to send hours on here. This is hard work, how many hours are behind those stakes.

Tbh, the correction that we see is still 5x from the base that we were so used to. Having said that, the cimmunity needs to work towards marketing our good and very good propoerties to outsiders. We need bigger pool. Irrespective if the price action, we need to sell ourselves. We have a great community but need great new members. Post, curate, invest and accumulate.

There are people working on marketing and I'm sure there's more to come, but it is also true that we need more development. So it is a process that takes some time. I'm not concerned, quite the opposite actually. Once the userbase grows, we're going to earn less, so if I could accumulate more before that, I'd be happy :)

From that perspective, yes i want fewer people and access the larger share of the reward 🥳. But, i would like to see a recognition of the value Hive holds in trasitioning to web 3.0.

We're going to get there, just be patient :P

According to my finding,I noticed that Hive is doing well since last month.
Even news is not affect the coin like that.
But you can't compare Hive with Dodge coin because the price of Dodge coin is selling while hive is buying.

You're right, Hive is holding strong.

Of course I can compare HIVE to DOGE and it is a good example to see the contrast between them. DOGE is dangerous, while HIVE is safe.

I think we are yet to see the final stage of this Bull Market... the stage where Bitcoin goes up a lot... and everything else has trouble catching up to it. 😁

That remains to be seen :)