Third Point is the latest institutional stalwart to be revealed as a client of Coinbase Custody. 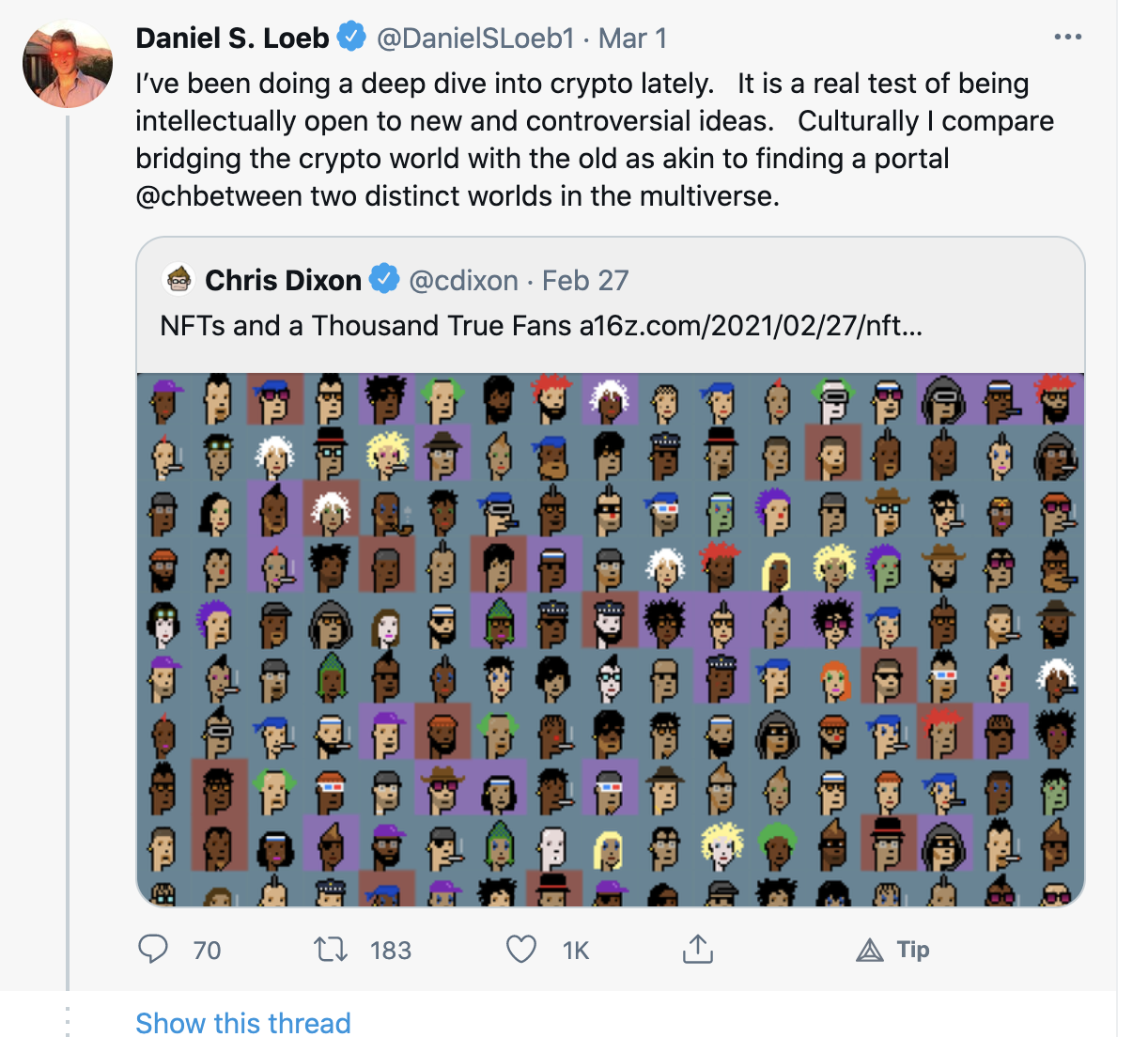 Loeb’s Third Point LLC now holds cryptocurrency from five of its funds with Coinbase, according to regulatory documents

Third Point LLC has billions, but it is not clear how much of that is in crypto, which assets, or for how long they’ve invested.

Third Point said it can invest directly in cryptos or indirectly through derivatives contracts. Notably, it is open to staking and lending any cryptos as well, the documents say.

I think institutional investors are waking up to staking or even DEFI. With staking you have two modes to generate growth through the token price appreciation and the staking payout. It’s a guaranteed reward on top of a speculative bet. With less than a week to go before Coinbase’s Nasdaq direct listing, the custody tie-up underscores how Coinbase has transformed itself from a bitcoin only digital wallet into a massive vault for Wall Street’s biggest crypto bets.

Coinbase revealed it held $122 billion in institutional assets during this week’s voluntary earnings call. It expects “meaningful growth” driven in part by custody revenue in the year ahead. If the bull market continues I'd expect more Wall Street firms to diversify into the space. I'll keep saying it we are still in the early stages of adoption. So it will be interesting to see how much custody revenue actually grows. I'll be using that number to determine where the cycle is at. I'm pretty excited to see Coinbase list because they will have to disclose more about their financials which gives retail investors so much needed info on the health fo the market.

CoinDesk reported earlier this week that fellow hedge fund titan Paul Tudor Jones is also a Coinbase client. This report is offering a glimpse at the deep-pocketed investors under Coinbase's management!

This is huge @cryptictruth. Year 2021 will see a huge spike in incoming capital to crypto. More people/orgs/funds will be bridged to this space. it's almost unbelievable where we will end up in the next 5 years. Coinbase has grown pretty fast and it is helping institutional investors to diversify their investment portfolio. It's so cool.

I think following the big money is key just like with stocks.

This will be a tail of both markets.
The price of Coinbase in the market
will tell us something else too.
Crunching numbers can open the door
to so much info this could lead for another
rise and acceptance of crypto to another level.
I know Microstrategy and Square are doing their part.
Soon Kraken will go public.

This is very true. I’m hoping it will be bullish as the news has been great lately but btc seems to be stagnate while alts are getting a bit of a mixed message right now.

Coinbase could be kicking off the next leg of the Crypto Story or be the Top or this current Bull Run !

So hard to know which will happen xD !

I hope whales will not be selling the news once it list. The market is very odd right now as all I see is very bullish news and btc is not doing much right now.