The new set of Reward Cards in Splinterlands has been out for some time so it's time to make an initial valuation ranking them from best to worst...
The ratings of these cards are based on my own experience, the Splinters I play the most (Water/Life/Dragon), and my play style in Gold League. This is the data on the printed cards so far after they became part of the rewards not so long ago from kiokizz.github.io

The set was released around May 20th so it has been going for roughly 50 days and 8% of the common cards have been distributed. The same supply for each card as the previous reward set was taken which at that time was based on the estimation of the game going to 1 Million active daily players. This didn't happen as most of the new accounts turned out to be bots and since the new ranked rewards system, the average amount of reward chests has gone up. So right now supply is way bigger than demand and those playing to earn and looking to dump the cards they earn are unable to do so unless they offer them at cheap prices. They pretty much go for similar prices already as the older reward cards in ~0.01$ for a common / ~0.03$ cor a Rare / ~0.13$ for an Epic / 1.7$ for a Legendary. At least those were the prices where I picked them up during what seemed to be a flash sale a couple of days ago.

Future prices will entirely depend on the number of new players coming into the game, If the game succeeds in this regard, prices should eventually go up, especially once they are fully printed since they will be the cheapest way to get collection power.

The ranking based on the current prices vs collection power the cards provide... 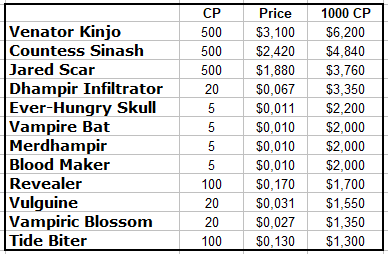 Anyway onto my personal Top 5 Ranking

I absolutely love the card design giving us another Double Strike Sneak Attack Card which is strong in most rulesets but not crazy overpowered as it remains vulnerable. Combined with +1 Melee Attack from the Daria Dragonscale Summoner, an Armor Protection from a card or Summoner, & another Melee Sneak card (Especially the Silvershield Assassin) this just rips through the backline of the opponent and it works in so many matches.

This is right now by far my favorite card of the set as I love the Melee Meta and it also is suited in so many different rules especially when only monsters up to 4 mana are allowed to be played. It is also worth leveling up to get the Cripple Ability since that does extra damage to monsters that have armor protection.

This card is just an excellent solution for both the Noxious Fumes Ruleset and the ones where all monsters get blast. Everyone playing with older cards and no Llama Summoner kind of suffers with the ruleset where all monsters get poisoned at the start. Putting this one in the back pretty much guarantees that it will survive and it also on top provides the slow ability to give a speed advantage. The fact that it's a neutral card also makes it available in many matches. While I haven't experimented that much with it, I love the design and on paper in the right circumstances, it shoud be really powerful.

I absolutely love the card design of this one. It has the disadvantage of not being able to attack from first position but still potentially offers power in matches as the Scavenger ability in low-mana battles can turn it into a tank later down the line. There also is a bigger chance for opponents to miss due to the dodge ability and it can get extra protection from the life summoner or cards that give armor / divine shield. Cards like this tend to bring fun matches especially when things play out as planned.

So the Water Splinter right now is just super powerful with Kelya giving Armor and Speed or the Arlic giving +1 Magic all while there are crazy strong class cards available that work with very powerful synergy. The Tide Biter on it's own is not a crazy strong card but it can be used in low mana melee-centric battles and it also fixes a weak spot against Yodin or blast game rules in combination with The Kraken and double heal.

Even though the Fire Splinter kind of sucks right now being in the bottom of the meta, the Countess Sinash is another card where I absolutely love the card design. It can't be attacked unless in 1st place, has 4 Ranged Damage directly going for the lowest health opponent while also providing a speed advantage and less useful affliction. At Level 2 I would say it's almost equally as strong as Level 3 and combined with the Qid Yuff Summoner it has the potential to cause quite some damage almost instantly killing one of the monsters of the opponent which often seals the win.

The Other Cards
As far as the other cards go, most of them also have good card design and are good in very specific situations. The Vampire Bat is a good alternative for the Cocatrice, The Everhungry Skull is strong when game rules have the health equalized or have Magic hit armor, The Revealer is good in the noxious fumes game rule but a bit too vulnerable and slow aside from that. The Jared Scar also has a fun game design but there are so many other cards that can be played instead. the Blood Maker make Yodin even more overpowered. The Vampiric Blossom and the Medhampir are my least favorites since they have better alternatives.

I love the card design on the new reward cards and they are/were so cheap that I went and buy enough copies to level them up to where I'm able to use them. I also love the fact that I'm willing to buy cards just because I want to have fun playing with them without there needing to be a direct return from them. All the Gold / Epic / Legendary cards of this set that I earn from here on out I intend to putup onto the rental market to earn some passive DEC which I will be using the reinvest completing mt Chaos Legion Collection.

Dear @costanza, we need your help!

The Hivebuzz proposal already got important support from the community. However, it lost its funding a few days ago when the HBD stabilizer proposal rose above it.

I can use this guide to see how many cards are printed. I just reblogged this posts !