@bengy 78
about 2 months ago
Pinmapple
Read this post on TravelFeed.io for the best experience Well... this is a sight that most people won't really associate with Australia. Most people will think of endless Sun and heat, and perhaps drought. And that was true not so long ago... but at the moment, we are going through a period of unusually heavy rain. In Sydney and good chunks of NSW and Queensland, the rain has been constantly heavy for about half a year... and the flooding has been quite severe in spots. Even in Sydney, I have colleagues are absolutely over having the stormwater system of entire suburbs overwhelmed with gigantic pools of water everywhere, leaking houses, and mould and mildew even affecting musical instruments!

Lake George is a familiar spot for me. Situated on the Federal Highway between Canberra and Sydney, it is a lake that I have passed many times when driving between the two places for work. In the Sydney direction, it is the reminder that I'm leaving home and heading off to the big smoke... and the fact that I will have another two and a half hours to drive!

In the Canberra direction, it is a welcome sight... an indication that I'm about an half hour away from home. Of course, in the middle of the night, is also a bit of a dangerous signal of hope... as I'm incredibly tired, and the thought of just going a little bit longer and powering on is just too tempting... even if it is a really bad idea! Anyway, my memories of the Lake are rooted heavily in my time studying in Canberra. The trip to Sydney would be this interesting drive past a lake that would be a lake in name only... it was quite often bone-dry... parched and cracked earth, with only a few disparate puddles to even give a hint that there was supposed to be a substantial body of water there!

After a year of heavy and above normal rainfall... well, the lake is definitely worthy of the name... and in fact, I would even say that on an overcast and rainy day (like the day that I took these photos), it resembled an ocean view rather than an inland lake scene! The Weereewa Lookout is one of the last stops on the way in from Sydney to Canberra (or one of the first ones if you are leaving Canberra!). It is a high lookout that marks the beginning of the climb into Canberra (or the descent from Canberra!). From here, the ACT-NSW border is less than half hour away.

It is a pleasant view that looks out over the expanse of Lake George, but I don't really know that there is much reason to stop here other than to have a quick survival break before heading the rest of the way into Canberra. However, I think that most people are like me... by the time that they reach this area... you may as well plough on and finish the journey!

I suspect that the greatest use will come from young couples headed out to a secluded area for a romantic tryst... I can't wait until spring breaks... I might revisit this area, I can imagine that with all this water and rain, there is going to be an explosion of colour and smells!

PS: for those who do end up stopping here... it is a real pain in the arse to get back onto the highway during the day if you are in a packed or loaded car. You are heading uphill (to Canberra) from a standing start... hoping to edge into traffic (two lanes) that is already travelling at 100-110 km (more in some cases...). Your best hope is that there will be some drivers that will adhere to old styles of driving and change lane to allow you in... even still, when I floored the ute as much as possible (I didn't want to skid and fishtail!), it took me quite some time to get up to speed!

It is crazy to me to see the lake with water. I have never seen it with water. Also last time we were back we did not stop at this rest stop, but a Lake George stop a bit further up the road… cause I got food poisoning and had to barf. But somehow I only gagged and held out to the half way McDonald’s for the BIG event. 🤣😂😂😂

LOL... was it the Exeter or Marulan Maccas? Or was it the Goulburn one... that one is closer to Canberra! Now I'm going to be thinking that each time...

I think the one where you gagged only is the one of the ones that I had stopped for a final rest after driving to Canberra from Sydney immediately after stepping off the plane from our last ever Europe flight! Everyone else in the car was asleep... I was powering on... but I was stopping quite a bit! 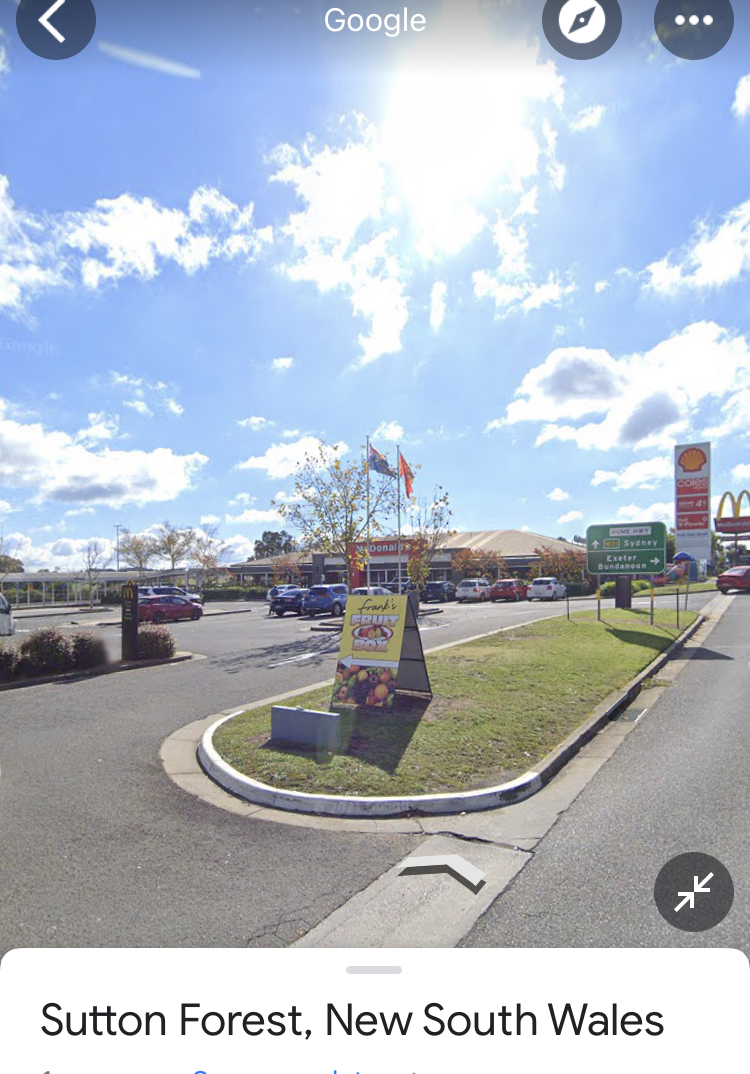 Oh, that is much nearer to Sydney! I normally stop around Marulan or Exeter. But someone suggested that I should go and leave the car at Mossvale, and train in from there. That way, I skip the Sydney traffic. Planning to give that a go next time.

Biggest thanks for the curation and support as always!