Robinhood share holders have to be pleased with this launch as share prices have surged to 100% gains yesterday for those with diamond hands. 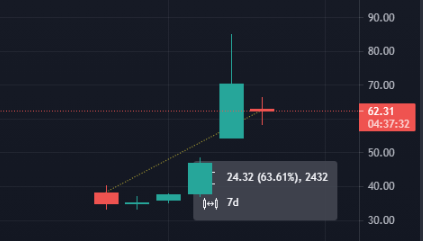 Share prices are currently sitting at $62.31 up about 64% from their launch on July 29th, that's a win for the company and it's valuation and certainly for it's shareholders and customers who were able to get the stock initially for around $38.

The company (Robinhood) had initially set aside up to 35% of it's shares for individual investors on its platform, giving it's users a fair chance at acquiring shares ahead of opening day trading.

This "fair" IPO launch is a first of it's kind as far as I know, and looks to take a page out of the modern day crypto play book.

Customers who had the chance to snap up shares sold directly to them through the platform should be pleased with their decision as the price surged to highs almost right out of the gate.

While the stock got off to a somewhat rocky start on day 1 it soon shot up to some pretty sweet highs, so much so that trading was halted a number of times.

Demand for shares of HOOD shot through the roof yesterday causing some pretty extreme volatility. You know what, I don't want to call it volatility, it was demand driven, and something we've grown pretty used to seeing in the crypto space.

"Trading in Robinhood halted after surge in stock price."

Demand for the shares went through the roof yesterday causing the price the surge as much as 50% on the day.

This company if managed properly is going to make bank over the coming years and its users had a chance to buy its stock at a measly $38 dollars.

This isn't a meme stock, this is the future of centralized trading platforms.

"Trading in online investment platform Robinhood was temporarily halted Wednesday after a rapid surge in its stock price just a week after the company’s lackluster debut on the Nasdaq." - thehill.com

I actually read that it was halted as many as 3 times throughout the trading day yesterday. This was demand driven, what's not to understand about that? It was even reported that the ARK Fintech Innovation ETF purchased roughly 89,000 shares or apx $4.2 Million worth for its Tech ETF.

Massive purchases like this could and other could easily send the price to the moon.

All in all congrats to anyone that was able to snag this under $40, you win!

this is obviously one of the advantage of investing in Capital market as well. one can hardly predict what will happen to the market in the next few days.

this is a huge gain for the people who have invested in the shares of the company.
thanks for sharing.

Yeah hopefully some of their customers are happy with the gains!

I bought and sold already.
Took the quick profit.

It was a wild swing trade.

Glad to hear you booked a profit! I would have done the same thing, buy and flip. Then if its crashes back down maybe pick some up for longer term hold.

A pullback would be awesome

Hey @agr8buzz, here is a little bit of BEER from @simplegame for you. Enjoy it!

A big win for those who had invested and for those who practically could not hit the green spot
,hopefully they
There will be greater days the capital market.

Love it when you hit the green spot