The place they call 'Kellie's Castle'...

@ackhoo 71
10 months ago (Edited)
Pinmapple
Read this post on TravelFeed.io for the best experience A place I've always wanted to check out myself, having seen and heard so much about it. Finally, while driving up to Ipoh, a town north of the capital city, we made a point to stop over at Kellie's Castle, situated just outside of a small town called Batu Gajah. At one time this structure was left abandoned, over-grown, hardly explorable or even accessible by us laymen... It was finally cleaned up sufficiently to be called a tourist attraction in some recent years. Built by a Scottish planter, William Kellie-Smith, sometime around 1915 - he had big plans with architecture featuring Scottish, Moorish and Tamilvanan Indian elements, with building materials imported from India, as well as craftsmen along with it all!

Alas, it was never completed - a huge part of it stands part-skeletal (which I felt added to the charm and mystery... but that's just me) Wandering around its corridors and rooms, one can see that that man had big plans indeed! The grounds themselves are extensive and impressive...  Read more about the Kellie's Castle story here

As usual in stories like this, many versions of the how and why surrounding this castle exist online. Rather unfairly known also as 'Kellie's Folly' - not a name I would use to refer to it, as if it had been completed, its magnificence would be proudly hailed by one and all instead! On approach to the castle, its position on a slight hill lends an impressive 'looming before you' kinda feeling... The six storey tower that was to house the first elevator in Malaysia! A back building, left uncompleted...

The weather when we arrived was predictably blistering hot! But dark clouds soon rolled in from a corner of the sky; hence we didn't get to explore all the buildings, nor the grounds towards the back. From records and photos online, there is supposedly more gardens and a sprawling staircase leading.... where? From the inside, looking out... All I know is that I wouldn't be caught dead there on the grounds when night falls!

As you might expect, Kellie's Castle is rumoured to have its own ghosts... And they even have a guided Haunted Tour around it! Nope, not interested!! One of the Moorish design windows on the first floor Long corridor over-looking the courtyard. Stuff of nightmares... like running down this never-ending corridor; excellent set for a movie! Hey, in fact I think they did shoot a movie there... View of the back building... the uncompleted section Even the stairs going up... and up are dramatic! They curve around corners, blind corners! Where you can't really see what or who is lying in wait ahead of you!!! Ok, I'm getting too imaginative! Almost at the very top... A wonderful view all round!
See the menacing dark clouds coming in despite the sunshiny day where we were... Looking down at the side lawn, a cool shelter for those strolling in the gardens The Raya river or stream that runs alongside the castle, leading to the mighty Kinta River. It was the colour of 'teh tarik' or the popular Malaysian pulled milk tea as it's been raining almost every afternoon/evening... See the high level of water Texture, texture, texture!
Part of the beauty of the castle is the use of raw brick. I'm not sure if the completed version would have featured the same or if it would all be plastered and painted over, but I like it this way! Back on ground level, this is one of my favourite views around the castle - this part of the main building faces the inner courtyard One last look from the car park.... before driving off!

Some say Smith built it for his wife.... others say it was for his son. Whatever the truth, am glad I finally got to visit Smith's 'Taj Mahal' even though I didn't get to finish touring the entire place. More details here

View this post on TravelFeed for the best experience.
photography architecture malaysia
0
0
0.000
54 comments

Really, is it in Malaysia? @ackhoo
I think it should be in Europe. It looks the similiar to the castles in Britian.

I have the same thought as you. I guessed it would be somewhere in the UK at first glance ..haha !!
A very cool place @ackhoo, I never knew such a cool place existed in Malaysia. Thanks for sharing this with us :)
Beautiful photos as well. ♥️

Awww, thank you, @trangbaby! 😊
So true... If I didn't know better, I wouldn't believe my eyes either... Happy to share this!

Haha, yup, it's true! I'm born and bred here, and yet this is the first time I got to go check it out! Definitely worth a visit 😊👍

My children have been memorizing the countries of Asia and whenever we hit Malaysia I have thought of you. I will have to show them these pictures - the tea colored river included.

So sweetttttttt! 😄 Speaking of tea coloured rivers - I guess I must have known I would have a use for this wide close-up shot of the river taken while crossing the bridge in front of the castle... 😂 Especially for you and the kids! 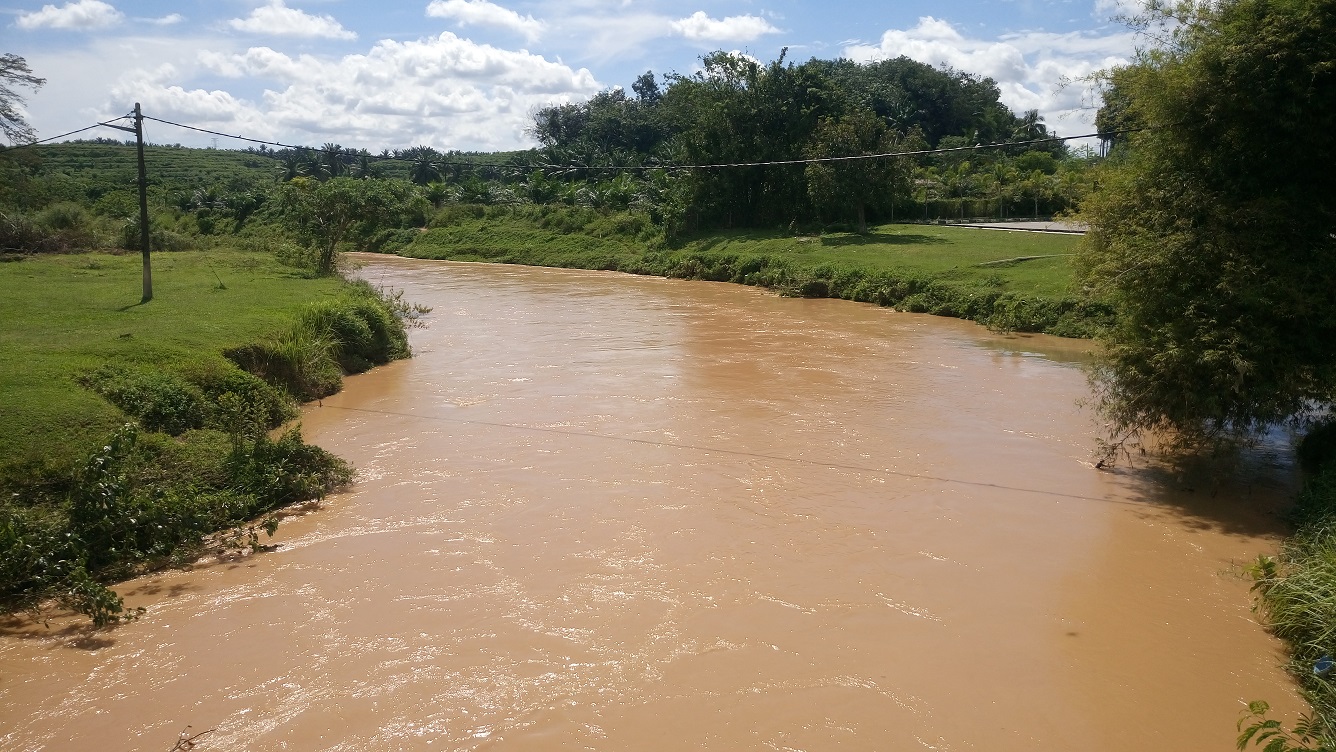 Thank you - the kids will be impressed you have tea rivers over there;)

Awesome to see you creating content again.
That is a very interesting post.
Have a good one and enjoy a bit of the extra support with @tipu curate 5

Thank you! Good to be back! I guess I knew I would be back some time, just a matter of time and matter... 😉 Glad you liked the post! And thanks for the support too!! Have a good one too!

Beautiful castle even if it has aged a lot! I like how you photographed the castle especially those details in the bricks. I also liked it that way because it is raw and original.

Thank you! I think they've kept it quite well as well - keeping in mind it's over 100 years old! :) The raw textures are my favourite too!

True! Im excited what you will show next time.😊

very beautiful place when visited in the afternoon. Old but gold 😎

Haha, nothing like the lure of photos and talk of faraway places to get the travel itch working again! 😄 Totally feel the same!

Congratulations @ackhoo! You received a sweet smile from TravelFeed. We love your work so keep up the good job. 😊

Yayyy! Thank you very much, TravelFeed team and @smeralda! 🤩🙏

This is very beautiful!!!

Thank you very much! 😊

If the government allows, I will definitely stay that night to explore its nightlife

Haha, doubt anyone will stop you... unless the ticketing people want to charge more... 😄
Good luck to you if you ever get to do it!

I never knew Malaysia had beautiful castles like these. Thank you for sharing.

Thank you very much, @queenb33! Glad you enjoyed it! 😊

good publication, it looks fabulous and your photos really enchanted me, your post is quite interesting !!:)

This castle is so beautiful, the traces of time are what I want to visit here, your pictures are amazing.

Hiya, @ybanezkim26 here, just swinging by to let you know that this post made it into our Honorable Mentions in Daily Travel Digest #1397.

Cool! Thank you very much, @ybanezkim26 and the @pinmapple team! :)

You're welcome! Keep up the good work!

Interesting stuff! Funny, in Colorado there is something similar—ruins of what was going to be a "Summer White House" for U.S. presidents. It was started a few years earlier than Kellie's Castle (1911) but never finished. It didn't get anywhere near as far as Kellie's Castle though… only a cornerstone and a bit of a wall.

Imagine how many of these half built mansions, castles, palaces, etc etc... dotted all around the world... Yeah, interesting indeed! Anyway, about that Summer White House, better the mountains and nature than the monstrosity that was to be built!

Yeah. I'm glad nature won this round. Humans have ruined way too many views already.

Never have I heard such a name before talk more of been there. Built in 1915? Such a structure would still last for more ages.

Yeah would be cool to see it today, if it had been completed...

I feel a terrible nostalgia every time I see a historical-artistic building in ruins, because they are part of the Culture of Humanity, with its beauties and darkness, its moments of glory and mourning, in short, its essence. I think I appreciate an interesting mix of both European and Eastern architectural elements and I suppose that is motivated, in this case, by the British presence, which clearly also imported part of their constructive mannerisms. Either way, you already know me and you know what a ruined jog I am, so I won't tell you how much I could enjoy in this place, because I think you already know me a little and imagine it. I hadn't seen this post, but I think the Haveyoubeenhere community wins by having an exceptional photographer and chronicler from Malaysia like you. A hug

You are most kind, @juancar347 my friend... I am honoured! Yes, knowing you, I thought you might enjoy this post 🙂 Ahaaa, fret not, ruins it may be, but somewhat 'saved'; and as what you refer to as "ruins", I think a certain degree of romanticism becomes it... People would not feel the same way about it if it was at 100%.