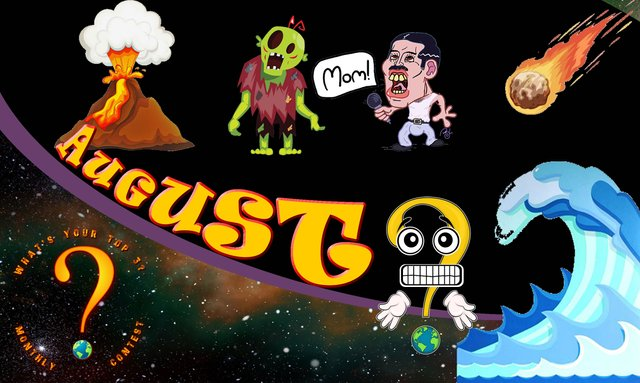 Science Fiction is my favorite movie genre and there are many science fiction movies that fit into the "end of the world" plot scenario. I decided to go with these 3 because they were the ones to popped into my head first when I was thinking about what to choose :) SPOILER ALERT:
The quick plot of this movie, it is about two fallen angels (Bartleby and Loki) who were banished from heaven by God. However, they have figured out a loophole to get back into heaven and if they succeed in re-entering heaven they will overrule the word of God. That cannot happen because it will disprove the fundamental concept of God's omnipotence and nullify all of existence, which means no more world/universe. No one can outsmart the all mighty God ;)

Overall this is a great movie, highly recommend, although if you are very religious you will probably not like it, since this entire movie just basically makes fun of religions, mostly Cathalicism/Christianity. This is an all around fun movie and it has a little bit of everything in it. Flying cars, space ships, space travel, aliens and lots of good versus evil action. It has a good cast of actors starring Bruce Willis and Milla Jovovich as the two main heroes who try to save the world.

SPOILER ALERT:
The quick plot of this movie, it is about an evil force, in the shape of a giant ball of black fire, that appears every 5000 years to try and destroy the earth and 5 elements are needed to create a weapon that can destroy it. The characters have to find all 5 elements and align them so the evil force can be destroyed before it hits earth.

Overall this is a fun movie with lots of action and comedic relief. So, watch it if you have not :) This movie is actually based on a 1951 movie of the same name, I have never seen the 1951 version so I am not sure how close the plot of this is to the original movie. This is just a pure science fiction thriller with Keanu Reeves as the main character.

SPOILER ALERT:
The quick plot of this movie, is that an alien species has decided that humans are destroying planet earth and all the living species on it, and this must stop. So they send an indestructible robot like creature on the planet that will destroy all humans, while all other living things are preserved inside these round spheres which are taken off the planet while the destruction occurs. When the robot is done killing all humans the spheres come back down to earth and release the living things back on earth, so they can live in peace without human interference.

Overall this is a great science fiction movie, highly recommend :)

Some great choices as always! I had kind of forgotten about Dogma, but I think it definitely works for the theme. I knew you'd have to pick some alien ones for this round, too. ;)

Make sure you set your post payout to 50/50. You keep the HP and then transfer the HIVE and/or HBD (whichever is paid out at the time) to @yourtop3 with a link to your blog post entry in the transfer memo. This is the minimum entry fee, but you can add as much as you like to it! The more you add, the more you can win.There is no maximum entry fee.

Not sure how to find your post payout? Look in your Hive Wallet under Author Rewards to find the exact payout for your post. In the example below you would send the 0.011 HBD and 6.441 HIVE over to the @yourtop3 account as your entry fee. I take it from there and convert all of the prize pool to SBD for easy prize distribution at the end of the month! Damn you really went into the archives to pull out your selections haven't seen these in ages, going to have to rewatch the day the earth stood still I haven't seen that one in ages

Another great post to remind me of some great movies I had all forgotten about. Loved the last one you nominated ^_^

Nice choices. Dogma was really good. The Fifth Element is one of my brother's all time favourites.

I've been planning to watch the original The Day the Earth Stood Still so that I can compare the two. Haven't got around to it yet.

@traciyork 73
about 1 year ago

Jinx on The Fifth Element (it was even in my #2 spot as well!). And I was going to say that Dogma & TDTESS were both on my long list, but I just realized I somehow overlooked that Keanu gem - dang it! And having seen the original, I can vouch for the remake being so much better. Excellent choices, @dksart and good luck with the dpoll!

Hey, it’s Q again - the mascot of the Your Top 3 Contest! Just swinging by to say thanks for sending over your entry fee, and I've added you in with your nominations now!

Good luck and keep your eyes peeled for the upcoming dpoll on the 19th where we put it to the public vote and let the Hive community decide their top 3 :)