Today I want to share with you my wednesday walk that I did on a short stop while driving from the spanish pyrenees to Fontainbleau a little bit south of Paris. As it was a rather long drive we wanted to take a short break to strech the legs a little bit and eat something. We choosed a parking lot in the shadow of some trees and some benches. After we sat for a while eating we strolled a bit through the french village. (I'm sorry I don't know the name of it anymore.)

I took my camera because I though I could maybe make a wednesdaywalk out of it. Actually I was a little disappointed that the village had so little to offer photography wise. After I saw a pillar on a parking lot I got an idea. The round top of the pillar reflected the blue sky and the white clouds which reminded me a bit of the globe. The initial spark of the idea.

That was when I thought, maybe the photos for my next wednesdaywalk will all be reflections. I was hooked by the idea and the search began. Obviously I started with something more trivial, a traffic mirror. Very obvious choice, but still you have to start with something...

But then I started to get a little more creative and adventurous. First I made some shots of reflections in car bodys. One of them I flipped upside down while editing and now I always get a little spacy looking at it. A lot of distortion because of the curvature. Are you a little confused at first glance as well? :D

With one car I was especially fascinated how clear the reflection of the rear window was. So I tried to take a selfie, which I usually never do. ;) The very slight distortions of the reflections are what I like about this photo. The rim of the seats going through my hands and the camera, the metal bar for the headrest and the blurred red lines of the window defogger. Two streets later, we discovered a beautiful entry of a big church. As the street was very narrow, I wasn't able to take a shot of it with my 50mm. Also I had decided to only take reflection shots... Fortunately on the opposite site of the alley, there was an office with a really big window. So I kneeled down and pointed the camera a little upwards so I wasn't in the shot. With this technique I could capture a bit of the huge entrance and stay clean with my resolution :D Using the reflection to artificially extend the distance between me and the church by some meters.

In the next street, there was a garage with big windows which were reflecting very nicely. I waited until a car drove by to create the illusion that the car was standing inside the garage.
Because the first two windows weren't perfectly parallel it's far from perfect. Driving inside the house...

I have to say, that I really like the confusion induced by a reflection that you don't recognize as one. As in the following photo, it takes some time to realize what is part of the reflection and whats on or behind the glass. Window of a counsel office. And another one. Without the lettering it feels more confusing for me.

Back at the parking, I had already tunred of the camera when I found a window screen in a car to protect the car from overheating. It had a pattern of swirls on it and reflected the light in rainbow colors. Also the trees around were reflected on the glass of the window. So I took a last shot of this "double reflection" which I thought looked kind of cool. In the end I have to say, this was one of my best idea for photographing I had in a long time. I know the photos didn't turned out all that pretty but it was so much fun looking for all kind of reflections and playing with the perspective. I saw so many things I would usually overlook and I learned a lot about how I see the world and also on how reflections work in general. I can definitely recommend this. Go out and photograph (or just look at) all the reflections in your surroundings! I at least was suprised, when I suddely saw the reflection in the engine hood and the car was literally gone.

Hope you enjoyed my entry for the wednesday walk,
if you did please let me know in the comments :)

Have a good week and see you next wednesday!
Constantin

Hello @constantshots, thank you for sharing this creative work! We just stopped by to say that you've been upvoted by the @creativecrypto magazine. The Creative Crypto is all about art on the blockchain and learning from creatives like you. Looking forward to crossing paths again soon. Steem on!

I loved this post, such a cool idea to go looking for reflections I am always onthe lookout for cool reflections ad even if some didnt turn out as good as you may ave liked you had fun and for me that the main thing :) !tip

Yeah, I think if you have fun, you will learn the most.
And I think I did learn a lot.

Reflections are an awesome part of photography, and it made the town much more interesting to explore looking for reflections.

Thanks for your nice comment and for the tip! :)
Have a great day!

🎁 Hi @constantshots! You have received 0.1 SBD tip from @tattoodjay!

Cars are great at reflections. I have gotten what I think are some pretty cool sunset shots off the hood, roof and sides of my car before.

Yeah, it's really cool how they "bend" the image.

I have gotten what I think are some pretty cool sunset shots off the hood, roof and sides of my car before.

Nice, did you post them somewhere so I can have a look?

I have a coupe I took with my smart phone, prior to getting my Nikon, I don't have any posted from the Nikon yet, I did like the way this B&W contest entry came out from way back in Feb 2018. 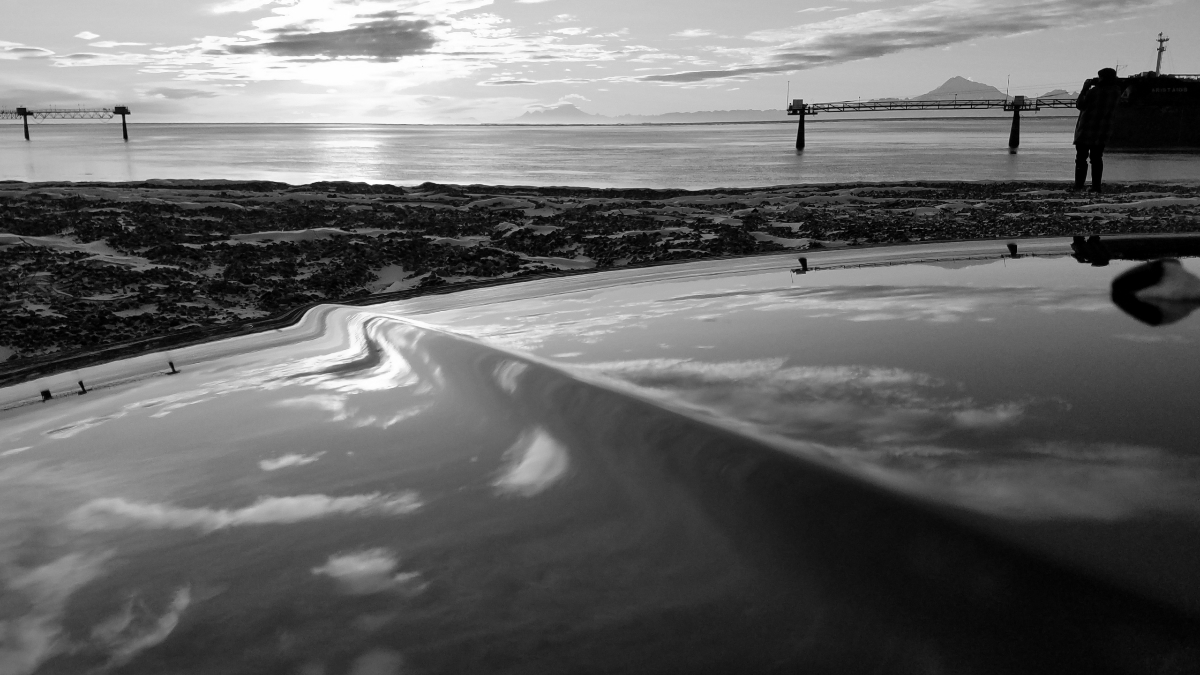 It took awhile to scroll back and find it. The only other one I had was a little blurry, it fit with the post, but it was not that great of one: The last sunset of 2018 for us. The first is on the hood of the car, and the second is a rear window reflection.

!BEER, I'm testing the beer bot out, I hope it works and gives you one.

Those are really nice reflections!
I really like the "wave" in the first one, fits the beach theme :)
Thanks for searching for and showing them!

Hey @constantshots, here is your BEER token. Enjoy it!