son-of-satire in #vaccines • 6 months ago (edited)

It seems the UK government have lost their nerve when it comes to vaccines. Whereas front-line health workers in the National Health Service (NHS) were all set to receive the miracle vaccine from Pfizer, it now appears the UK State is hesitant. 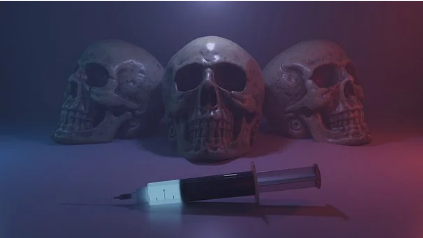 1.4 million NHS staff have been told they are no longer favoured by the Gods and will not be the first to receive the State approved ambrosia. While Health Secretary Matt Hancock gave no indication why this plan had changed, perhaps we get a clue from the collective sigh of relief expressed by tens of thousands of NHS workers online.

It seems the people tasked with doling out this hastily cobbled together, highly suspect drug are no more enthusiastic than the growing number of Brits who are asking questions about Pfizer and BioNTecch’s MRNA vaccine.

While I suspect the UK government aren’t too fussed about killing a few thousand vulnerable elderly people, they certainly didn’t baulk at killing 40,000 of them in the spring, they are less gung-ho about wiping out NHS staff. Especially seeing as they have just spent the best part of year elevating them to the status of saints.

The first round of their miserable story about why we needed to shut down the country was entirely predicated upon the need to “save the NHS.” Despite being told that they were in the midst of a deadly plague, and had to avoid each other accordingly, locked in their houses with 1 hours exercise a day, the State still thought it essential that, once a week, everyone should gather on the street together, at the same time, to clap like demented seals for their allotted NHS heroes. So poisoning the deified troops to death now would be very bad from a PR perspective.

I am being facetious, I don’t really think the Pfizer vaxx will kill people straight away. However I do believe a PR catastrophe is exactly why NHS workers won’t now be first inline. Quite clearly there is growing disquiet among the people about this seemingly rushed vaccine. NHS staff are coming together to resist the compulsory jab. This won’t inspire the sheeple to line up for theirs.

So instead the State are going to force it upon vulnerable elderly people trapped, alone and bereft of their families, in poorly staffed, under equipped care homes. Voiceless and with no one to protect them, just as earlier in the year, they are expected to die soon anyway so the State has no qualms about rubbing them out. Plausible deniability is practically assured in their case.

You might think I am being facetious again, but in the case of the the most vulnerable I fear I may be being quite measured. There are no completed trials for this vaccine, claims of 90 – 95% effectiveness don’t mean it stops you spreading COVID 19 it just supposedly stops you getting ill once you are infected. But from what little the trial have received we know it doesn’t really work for older people. The only groups who are at any risk from COVID 19.

I’ve seen people on social media saying they were going to take this vaccine to protect others. This is simply delusional, not even the manufacturers are claiming that capability. Indeed there is considerable debate about whether they are actually claiming anything at all. Eminent scientists and physicians Dr Mike Yeadon and Dr Wolfgang Wodarge have urged European health authorities to immediately halt distribution of the Pfizer vaccine.

It is completely untested as not even any medium duration safety trials have been completed. It appears trials were designed to succeed with barely any attempt made to identify potential problems. The mRNA technology has never been used on humans and presents an unknown array of potential hazards, ranging from mild adverse reactions to sterilisation and death. At the same time the State has given the manufacturers and themselves complete immunity from prosecution while the medicines regulator (the MHRA) have ordered bespoke AI software to manage what they say is the anticipated “high volume” of adverse drug reactions (ADR’s) from the COVID vax.

Already tasked with monitoring ADR’s, they say their system will be unable to cope with the huge numbers of ADR’s they are expecting. Now the British Medical Association (BMA), who represent doctors, are lobbying hard to give doctors immunity from any prosecution. There are some suggestions that many Doctors are prepared to refuse to administer the vaccine without this legal protection.

You have to ask, if all the people responsible for injecting the population are completely unwilling to accept any liability for their actions why on Earth are people even thinking about taking it? I think we know why. If this year of COVID is notable for anything other than the claimed pandemic, it is the realisation that billions of people around the world are prepared to do whatever authority tells them, without so much as a murmur.

I am not saying that the Pfizer vaccine is unsafe. I have no idea, and that is the point. No one knows, including the manufacturers and the research scientists who trialled it. It has not been tested as claimed and the MHRA regulator who approved are a wholly owned subsidiary of Big Pharma.

It seems to me that the government know there is considerable resistance to taking the rushed vaccine. They are not prepared to risk high profile rejection from NHS workers. The State has vaccine hesitancy of its own.

Honestly, I prefer waiting for a safer and more effective vaccine than use what pfizer has to offer. I just don't feel comfortable using a vaccine that could potentially end my life rather save it...

Further, if the Wuhan-flu was so virulent, then ever NHS worker should have been exposed and created anti-bodies.

But you don't even hear of people being tested to see if they created anti-bodies.
No, we must go first to an untested, known to be highly dangerous, experimental vaccine.

From the minimal test evidence i have seen, i will defend myself against injection, like i would defend myself from someone with a knife.

But i think Killy Gate will get his desire, a vaccine to help lower the worlds population.

Vital Information About the Covid 19 Vaccine