Showcase April - Measure yourself only against your previous self - My philosophy

We are all in a different journey. To compare ourselves to other Steemians is not only unwise but also unhealthy. 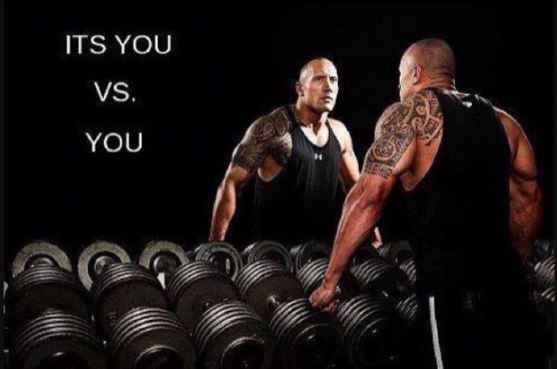 Some Steemians have been here since the start, some of us have been around for quite some time and some of you are newcomers but hey! We are all early adopters!. Remember we are still in the Beta version of this vanguardist platform and every single unit of Steem Power we gather today, could be worth tomorrow a lot more than what it is worth now.

The past few weeks I have spoken with a lot of people about organic growth, both individually and colectivelly and I often hear the argument X user is growing so fat, look at the payouts of Y Steemian, if only I had the followers of Z person.

My friend, that is not the way to be a good Steemian

Nobody can judge your work but yourself. You know how many hours you put into blogging, no one else but you is aware of all those late nights speaking on Discord or Steemit chat making new friends and engaging with the different subcommunities. Only you can say if you´ve put a little, some, or a lot of effort in helping your growth in the platform.

Success is a ver subjective word. No one can say you are more succesful on Steemit than any other user, because you know what? You must not compare yourself to any other Steemian rather than yourself the day before.

I know people who spend 10 hours on Steemit and on the different chat rooms and, when I see their posts, the amount of votes and the double digit rewards they are getting daily, I can only think Wow, this person deserves it, I´m happy for him/her, but I never compare myself to them.

Because you know what?

Perhaps you are spending a lot of time on the platform and you still think your content is being underrated or undervalued, and you know what? That may be true, but sometimes all you have to do is Shout to the Steemian world what you are doing.

I know a user who spends a lot of time growing her community and she is pretty much the most committed I´ve seen. A few months ago, she was getting very small payouts and my advice was: Have you ever thought about posting in english instead of your own language, maybe once a week so people actually know what you are doing? Guess what? She did, and now she is getting the post rewards she deserve.

This is just an example of many I´ve seen in my almost 7 months in the platform.

Some users are getting crumbs for their posts and then when I ask for their Discord to have a chat, they don´t even know what that is... I get it, not everyone has the spare time to join communities, but if they want their content to be seen that is the way to go. There aren´t so many curators that browse all the tags and sometimes some amazing content is passed by and no one sees it, but not because it is not great, it is just because we are competing with thousands of people to get some visibility.

If someone else has succes (whatever that may be), be happy for them, don´t think I should be getting those rewards, better yet, analyze what that user is doing and perhaps emulate some of his/her good practices, you might end up amazed with the results.

I know, sometimes a but of competition and comparison can be good, because you know how much you have advanced but most of the times is counterproductive.

I read an article about how social media can depress us if we are not careful, the argument is very simple: If you browse your Facebook feed, you will only find positive things, all you will see is people getting married, posting travel pictures, new babies on the way, a photo album of people getting their degrees... but you won´t see the failures of the very same people... then you compare yourself to that perfect life of them, and you ask yourself *What am I doing wrong?

You are not doing anything wrong, you are just seeing only the positive aspects of your friends life.

And why should you? You shouldn´t even worry about their path, you should focus on yours. Set your goals and make a plan to achieve them, let other people worry about themselves, the moment you start focusing on how you want to grow and start comparting to yourself the day before, instead of comparing you to someone who´s been on Steemit for a year or started with a big amount of investment, well, I guarantee you, you´ll start having the succes you want, that success you think you deserve. This post was originally posted in October 2017 and it's part of my initiative called showcase April, where I'll post the best content I've done over the past three years.

“You spend your whole life stuck in the labyrinth, thinking about how you'll escape one day, and how awesome it will be, and imagining that future keeps you going, but you never do it. You just use the future to escape the present.”
― John Green, Looking for Alaska

Break the chains and free your mind from the pains of the past and the uncertainty of certain pain in the future. - rilo