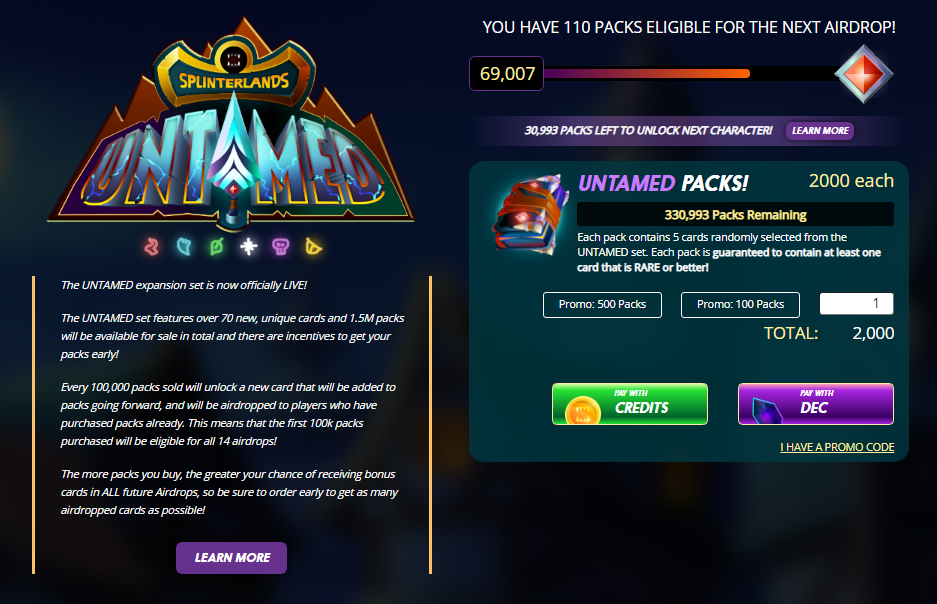 Today I got the urge to check how many Splinterland UNTAMED Packs are left for sale. Once I quickly and easily navigated to the shop area of the Splinterlands game I discovered that 330,993 Packs remained.

At first glance this might look like allot of packs but in reality it isn't that many. I suspect we will be moving on to a new edition of Splinterland cards sooner than most anticipate.

(1) As the saying goes history repeats itself. If memory serves me correctly both past Editions (Alpha & Beta) both sold like hot cakes once the remainder packs left for sale hit around 100,000 (Just 220,000 more sales to go).

(2) A large percentage of Monster Maniacs are much more experienced in all things Splinterlands then they were when they first started investing/playing the game (Which includes buying and selling packs).

(3) Alpha packs that once cost just $2 are now being listed for sale for over $60 on the Hive-Engine market. Beta Packs were also purchased for just $2 but are now nearing the price of $19 each. The more experienced Monster Maniacs have likely taken note of this and those that are whales will likely start buying up UNTAMED packs by the hundreds (when we near that 100,000 mark) for their resale value.

I have a few UNTAMED packs and I think its about time I open some. I opened nine packs altogether, my best opening can be seen below. Contessa L'ament was by far the best card I found out of the 45 cards I flipped. It might be hard to believe but I been collecting since the Alpha edition and this is my very first Death Summoner that is a gold foil (I was very excited to flip it). The Tortisian Fighter was the only other gold card I found out of the nine packs I opened. 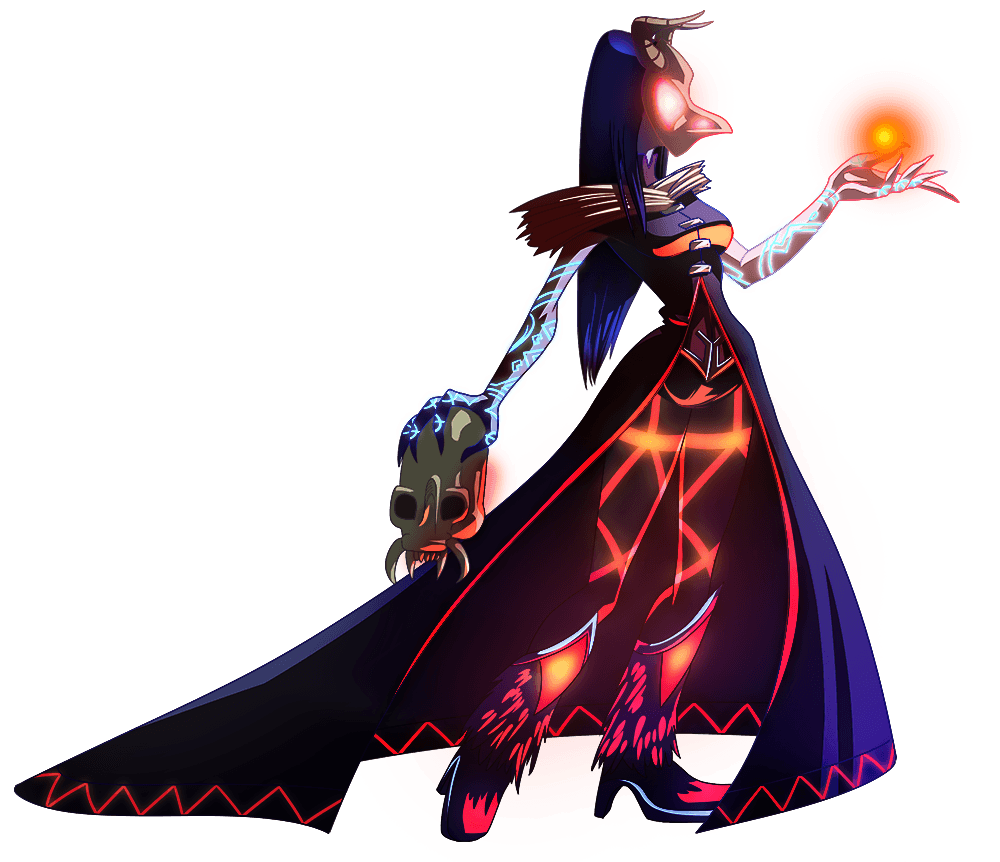 The dark witch known as Contessa L’ament brings a chill to the entire audience of Mount Mox whenever she is called upon to summon. Her flowing robes seem to absorb light from all around; it is said that the eminence of a dark star is woven into their fabric. The ghastly, rasping voice she uses to control her monsters is naturally amplified as it echoes through the arena. Contessa wears a white mask so none can see her face, a mask which cries a single tear, as if lamenting some never-forgotten loss from a distant living past.

Lets Look At The Numbers

I managed a net profit of negative $6.46 USD. I had a negative return value in all packs but one (Pack 4). At first glance this might look like a bad return but if we add the value of FUN and the Excitement of possibly flipping over a Gold Foil Legend then opening packs is the way to go. BUT if one is looking to go the passive route of collecting these awesome cards than your best bet is to purchase each card individually from the official Splinterlands marketplace. As the above screenshot shows, I had a total value of $1.27* in this season rewards. I ended the season in the diamond league and opened a total of 40 Reward Chests. Twelve contained cards and twenty eight contained small amounts of DEC or Potions.

The Sand Worm was the most valuable ($0.24 USD) that I flipped. It also happens to be one of my favorite Splinterland cards so I was happy to have seen one turn up in my season rewards. 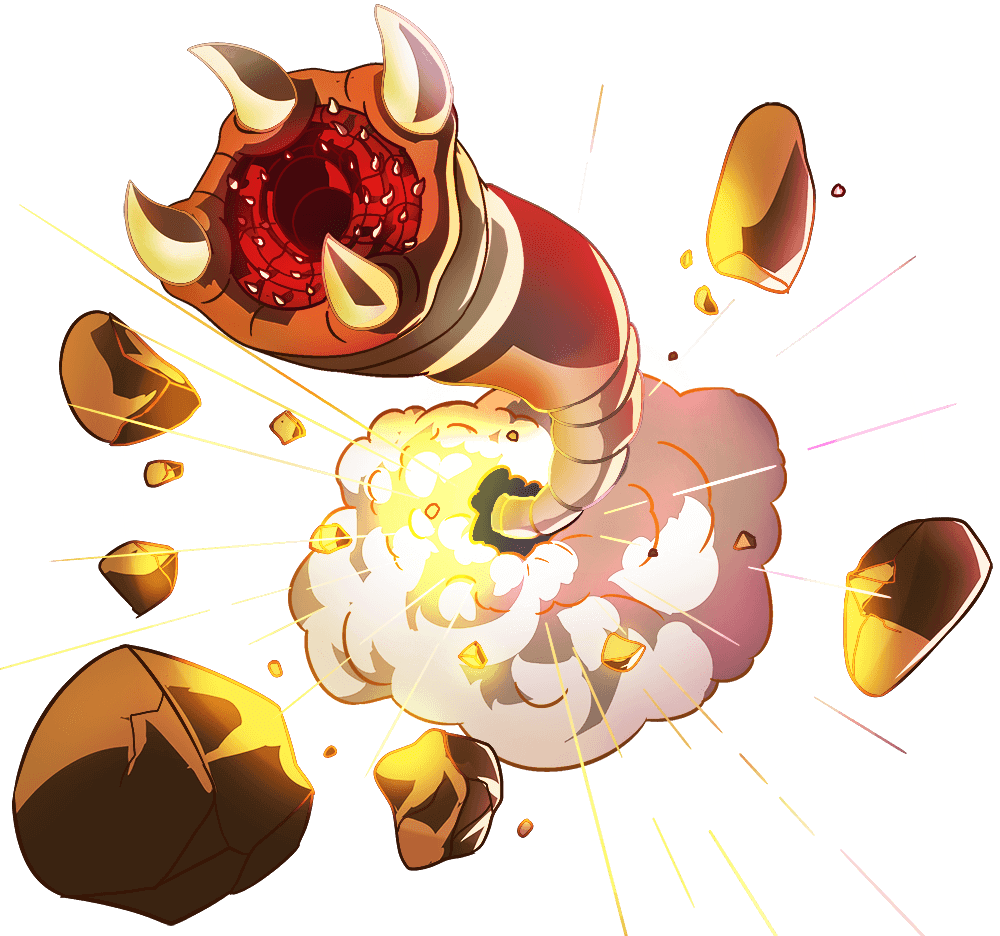 Huge Sand Worms have always lived in the desert of Draykh-Nahka, but with the recent uncovering of the various Untamed Prophecies, they have mysteriously grown even larger. They have also become more wild and free, somehow discovering how to escape from the Sands of the Dragon Splinter. Although it has never been witnessed, biologists believe that the Worms have learned how to swim. If they have indeed learned to burrow through water like sand, the Splinterlands will suffer greatly from their proliferation. In Mount Mox battle, Sand Worms can swallow monsters of nearly any size with no need to chew. They can even snatch fliers directly from the air, extending out of the ground even higher than the arena walls.

Splinterlands (also known as Steemmonsters) is a digital card game created by @aggroed and @yabapmatt. Tournaments in which giveaway prizes that have monetary value are being played daily. You can start playing or investing in Splinterlands today by clicking here. Another thing I was thinking is that these last cards that only came out now in the last air drops will be much rarer, so we will hardly see, for example, the price of this new kitten summoner falling ...

I agree although I hope Splinterlands stays away from making too many kitten cards.

These cards are suppose to be monsters :)

Wow look at those pack prices now,.. and a sexy market cap too!

It's insane to think that one (investment wise) would of been better off to buy and hold packs.

I got 20 ORBS that I intend on hoarding for awhile.

you're absolutely right! Hurry to buy!