There was a prequel to the Alien movies on the cards for well over a decade. At one time, even speculation (and completed draft) of an actual sequel to James Cameron’s Alienswhich involved the characters Ripley, Newt, Corporal Hicks and Bishop returning to an Earth rife with a fresh alien infestation. But after much negotiations, a story charting the very beginnings of the xenomorph lifeforms won out. The wheels staring turning down at 20th Century Fox and in 2012 we finally got our first standalone alien movie since Alien: Resurrection way back in 1997. But was the long wait actually worth the end result? Set in the year 2093, a crew aboard the starship Prometheus set out on an charted expedition in search of extra-terrestrial life on the moon LV-223. More to the point, attempting to discover the existence of so-called “Engineers” who it’s believed were responsible for the creation of humankind. Mission director Meredith Vickers (played by Noomi Rapace) heads up proceedings as well as a synthetic android named David (played by Michael Fassbender). Once landed on the surface on the moon, several crew members are sent down to explore the barren, lifeless surroundings of their new habitat. They soon come across a cave exhibiting little to no light whatsoever. As the team venture deeper inside, they find strange cylindrical stone artefacts as well as an unknown headless alien creature. Whilst David takes it upon him to secretly steal one of these stone cylinders, which gradually begin to leak some sort of dark ooze, two other members manage to disengage themselves from the rest of the party and get lost in the black labyrinth. Shortly afterwards, they are attacked by something dwelling within, leading to them both being infected by a contagion much worse than anything they could ever have imagined. With veteran director Sir Ridley Scott helming this project and also responsible for the original Alien back in 1979, the chances of a successful movie were great indeed. The one thing very evident from the very start is how authentic everything looks and feels. From the haunting score in the background to the spectacular visuals and design, there is no doubt we are watching an “alien” movie through and through. The atmosphere is gauged just so to slot you right back into the setting of the original masterpiece. Noomi Rapace delivers an exceptionally good performance as does Michael Fassbender playing the oddly placed android. Both stars are a large part of why this movie worked on so many levels. A special mention goes to Idris Elba and Charlize Theron for playing solid roles as supporting crew members aboard the Prometheus, but make no mistake. Their former two co-stars steal the show. The cinematography within the ship as well as on LV-223 is gloriously composed and shot. Sweeping camera pans of the vast moon add a sense of grandeur and isolation all at the same time. It’s extremely impressive stuff. 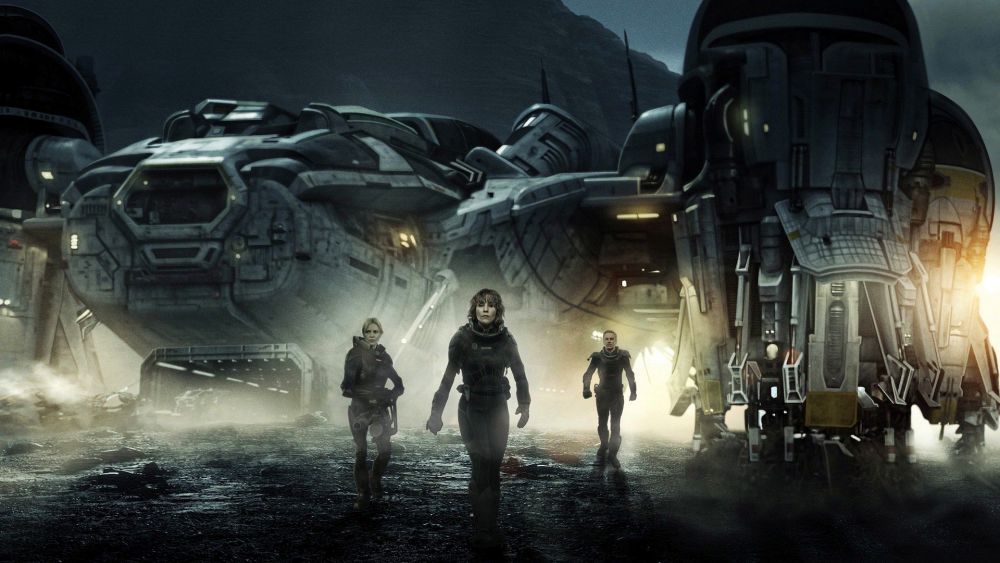 The story is one I feel may divide fans and critics alike. Without delving into spoiler territory, I thought the concepts implemented throughout the narrative, were very well executed. With so much lore and reference material to choose from regarding the previous entries in this popular franchise, they had so many different paths they could have taken. For the record, I do like and agree with the one they decided upon. The overall sense of pervading dread increases at a nice pace as they slowly decipher a few “home truths” about what is actually happening on the desolate LV-223. The final third act launches into a manic race against the clock as the action is intense and riveting all the way until its dramatic closing scenes. I was subtly glued to the screen for the majority of the movie. The creatures used in the film provide an interesting insight into the historical relevance they represent given what we know as the actual “alien” creature from the movies preceding it. This only goes to show how well things were planned out and thought through whilst in the script-writing and production stages. It all ties in quite nicely and fits snugly into the universe created by Sir Ridley Scott.

All in all, a really good movie with set pieces and music realised with a genuine passion for the franchise. If any problems exist in this movie, it could be a few slight pacing issues around the beginning and halfway mark, but again, these are fleeting as best. Prometheus was everything I wanted an alien prequel to be. Solid performances, terrifying creatures and an isolated setting featuring gorgeous otherworldly landscapes. Sci-fi at its very best…