One of the most successful movie franchises of all time is the “Alien” saga. Thrilling audiences around the world since 1979 and still going strong today, there is a clear message being sent out to the world. Creatures chasing humans about in deep space puts bums on theatre seats. A tested and proven formula if ever there was one. So taking that same beloved premise and creating something “new” from it is quite a bold move from anyones standpoint, as direct comparisons made to the original source material are inevitable. Though this seems to be exactly what new movie “Life” strode to do. A stellar cast kicks off this new space adventure, headed up by some big names in the business like Jake Gyllenhaal and Ryan Reynolds. And the plot may also sound a little familiar to some of you. Six ISS (International Space Station)crew members manage to retrieve and capture a dormant single-celled organism from aboard an unmanned, damaged space probe. The craft was found to be travelling back from a Mars mission to collect soil samples that possibly contained extraterrestrial life. Excited by this new prospective life-form, an exobiologist decides to try and revive it through the use of sudden bursts of electrical shock therapy. His actions do indeed revive the organism (who they have already named Calvin) however it doesn’t take too long for things from hereon in to take an extreme turn for the worst. 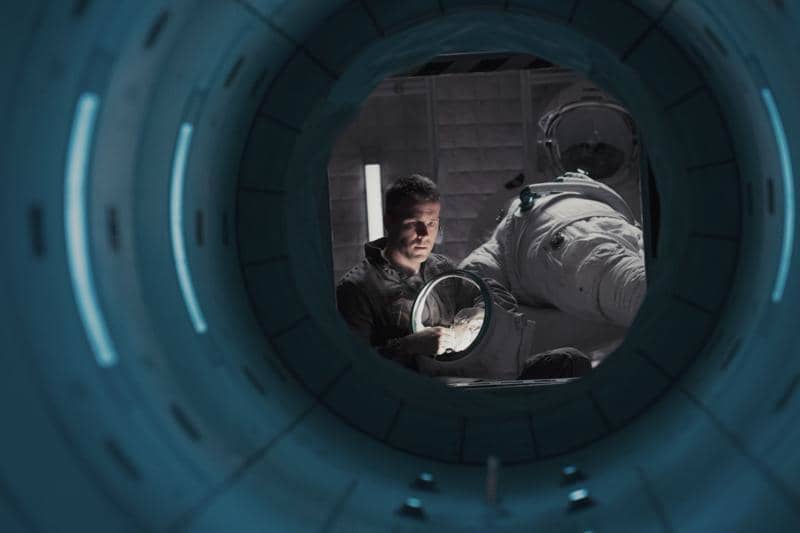 The first thing that struck me about this movie were the outstanding visuals. Wide, sweeping shots of deep space from both inside and outside of the main vessel are breathtaking to look at. Moments where various crew members must navigate their way through narrow, twisting shafts and air vents, prove to be both claustrophobic and terrifying. The acting is also worthy of high praise. In places where the movie script command tense or volatile situations to be played out, the cast delivers on all accounts nicely. There is one scene in particular where the creature is attempting to wiggle its way into one of the crew members space suits. As you can imagine, the film is littered with many of these edge-of-your-seat moments which I’m sure viewers will most certainly appreciate.

The creature itself, as with any movie of this nature, is the main selling point. And the end result I feel accomplished what the movie was striving for. After all, this film is a straight up sci-fi actioner. No extra bells and whistles to speak of. In other words, it wants to do what it says “on the tin”. As the life-form “evolves” through each subsequent stage of its transformation, we are treated to something that has enough creep factor to rival most sci-fi monster movies in the same vein. All except the “Alien” movies. The horrifying creation produced from the mastermind of H. R. Giger can never be replicated. But Life secretly hopes people will eventually view it as an independent piece of film-making altogether. And to that end, the movie does hold up really well. Additional props must also be given for a twist ending that I’m sure nobody saw coming. Well done on that front!

All in all, I really enjoyed Life. It initially went for something formulaic, but wound up feeling fresh and invigorating to enthral audience members. The actual monster taking centre stage was a memorable one as well as the action being frantic and fast-paced throughout. A great little title that should have gotten way more recognition than it did at the time of its release.

Ezzy! So glad to find you still here! Playing a bit of catch up, these are crazy times in the steem world. But for me it's always been about the people I've met, who I will always love. I will be about more often, I've been super busy but now that grapevine season is ending at least one big thing is off my plate and freeing up some time :0). How are you sweetie?

Dreemit! So great to see you back! Sadly, as you say, many have left the platform however, for whatever reason, I'm still here. Glad you know you're doing well and have some free time to spend here. The drama is through the roof at the moment. Highly charged times on the Steem blockchain, possibly more than ever before. In other words, just another regular day up in here. :)

Beautiful captures and videography is also what makes one glued to a movie aside from the plot.

I never can tell..