Using the archetypal backdrop of the renowned classic King Kong, Legendary Studios planned on launching a “monster movie” franchise with the aim of reinvigorating this expansive genre for modern day fans. The first of several future productions (most recent of which will be the highly anticipated Kong vs. Godzilla), Kong: Skull Island was released early 2017 and was the goliath ape’s first outing since 2005. But can it live up to the magic and charm of its predecessors? Led by a veteran tracker known as James Conrad (played by Tom Hiddleston), a military escort set out CV to the recently discovered Skull Island on a surveillance mission. Upon arrival, they begin dropping bombs via helicopter to map out its terrain in a concerted effort to learn more about it. Their actions attract the attentions of the hulking furry beast who, in defence of his habitat, attacks the team. As a result, only a handful of men end up surviving the ferocious assault, one being James Conrad and the other Lieutenant Colonel Preston Packard (played by Samuel Jackson). This soon leads to two teams being formed but both having conflicting interests. Preston wants revenge exacted upon the ape for killing several of his men whereas Conrad wishes to find a way off the island altogether. The wheels are set in motion but they soon find out that Kong is not the only sizable beast standing in their way. 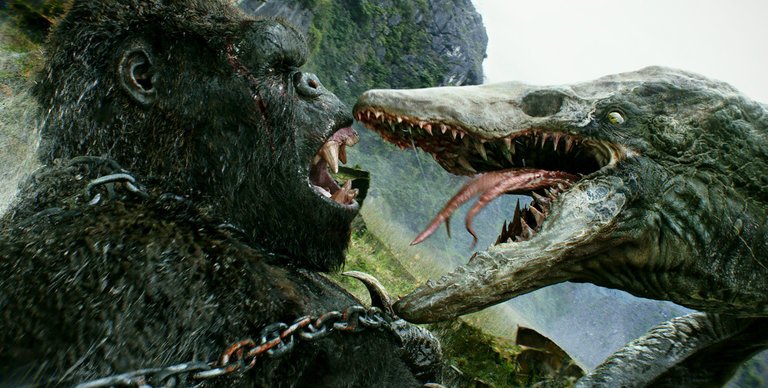 First things first. Kong: Skull Island pushes in the direction of action over substance. Though not necessarily in a bad way. Our hero’s as well as the main villain, who unsurprisingly is not Kong himself, are serviceable to the plot but completely dispensable at the same time. As men are lost throughout the duration of the film, there is no pre-defined established affinity to them whatsoever from the viewers perspective. This is very much a “by the numbers” standard fare story. The acting, whilst not Oscar worthy by a long shot, is well deserving of praise for what we can expect. There are even a few emotional scenes to be had in parts, but I feel they fall by the wayside pretty fast given how sparse and inconclusive they come across. But, with the title being what it is, most will not go to see this for the humanitarian aspect. And this is where the movie plays its trump card. The effects are simply fantastic. And that can only be a good thing as the star of the show has never looked better. Kong is absolutely huge. Bigger than any other iteration of him in the past. Just the way we wanted it too. There is a scene near the beginning where you see a silhouette of the giant ape set against a shimmering sun. Haunting beautiful in the pervading dread about to be unleashed on the poor unsuspecting soldiers. The other creatures on the island also live up to the same standard of excellence as our CGI show-stopper does. A special mention going to a scene involving Kong feeding in the waters of the jungle. It all makes for some serious eye-candy and serve as truly memorable moments in the movie. Another good thing is that there is an arch nemesis to Kong that surfaces in the third act which really gives audience the epic monster battles they’ve been waiting for. And delivers so commendably.

The question of whether there is an audience for this type of movie is answered with ease. Recouping a sensational $566 million dollars at the box office, the people have spoken. This could well turn out to be a very successful run of movies (be sure to check out a special "easter egg" after the end credits roll). With its thumping soundtrack of the 70’s blaring in the background as well as the action fast and fierce, I would recommend this movie without hesitation. Though with the only caveat being if this is your sort of thing. If a free-for-all monster mash of gigantic mutated animals beating the seven shades of hell out of each other isn’t your cup of tea, do look elsewhere. There is nothing to see here. The future does indeed look bright.