If there was one movie that screamed out for a modernised remake, few would argue with IT being a likely candidate. I remember only too well the potential of the original 1990's made-for-tv serial adaptation. With a stirring performance by Tim Curry as the chill-inducing Pennywise the Clown, this 2-part retelling of Stephen King’s renowned masterpiece had all the hallmarks of being an instant classic. However, the final product was beset with problematic issues. Especially the poorly executed finale of the second movie. So, could a new attempt at this phenomenally successful story be done any justice this time around? The narrative follows the book and previous film very closely. A young boy, Georgie Denbough, is murdered by the creature known as Pennywise the Dancing Clown. Though to the knowledge of the none-the-wiser townsfolk, his abduction is put down as an unsolved disappearance. Soon after, the boy’s brother Bill, as well as his band of five young companions (known as “The Losers Club”) are terrorized and savaged by the pale-faced demonic manifestation. As the clock ticks ever closer to their final demise, they must frantically search for clues to beat “IT” once and for all or else suffer the same fateful consequences of Bill’s deceased brother. 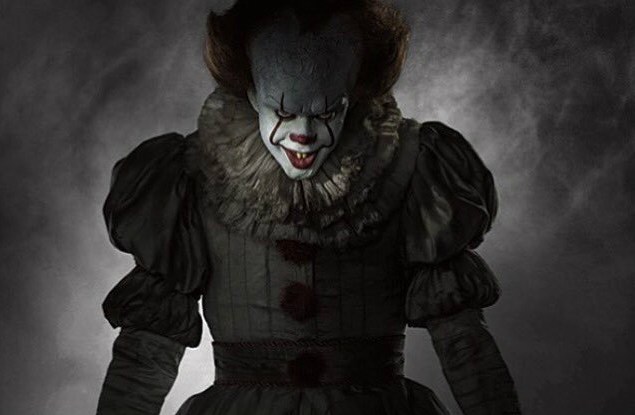 I went into this movie placing my expectations as neutral as possible. Bearing in mind the horrifying (in a good way, mind) impression left by Tim Currys incarnation of Pennywise, I was more than intrigued to see what our new replacement in the form of Bill Skarsgard had in store for us. To put it lightly, I was blown away. His portrayal of the demented maniacal monster was more than I could have ever hoped for. The subtle sneers, the fact that in no single scene does he ever blink, the almost involuntary saliva sporadically oozing from his mouth. He gave this character his all... And then some. Given that the main focus of this movie lay solely in his hands, he delivered to us a masterclass in his acting prowess to be remembered long after the movie credits finished rolling. But what of the other six main young protagonists of the movie? In the past, then people heard the words “child actors” mentioned, this used to usher in a chorus of raised eyebrows as to how bad they would affect the quality of the movie in question. Though I can tell you right now, their acting abilities were equally as riveting, charismatic and believable as any of the adult stars on screen. The television series Stranger Things showcased what this new breed of adolescent stars are capable of and the young cast members of IT are no exception. In fact, you may pick out the familiar face of Finn Wolfhard in IT who, amongst the half dozen of them all, pull off an exception job with the roles they play.

I found the movie itself to be thoroughly enjoyable and offering up enough of the “creep factor” to satisfy even the most horror-hardened fans of the genre. The different iterations of Pennywise littered throughout the film are equally as disturbing as they are horrifying. Admittedly, there are no “deep” messages embedded within the story narrative nor any major twists in the plot to speak of. But what there is, on a generic base level, is done so with enough “panache and brilliance” that it raises this film into the echelons of movie excellence. Director Andy Muschietti has done a superb job with the rich source material and, in case you weren’t aware, will be reprising his role in the next movie which bodes extremely well for fans of this utterly entertaining franchise.

In a nutshell, I thought IT was an absolutely fantastic movie going experience. It had all the tension, scares and action you could ask for. Even a little romance and humour thrown in for good measure, though thankfully not overly so. I'm glad to say the end result of this 2017 adaption of a classic novel by legendary horror writer himself, Stephen King, is at long last given the celluloid treatment it so desperately needed and deserved.

Now, if only the follow can stand up to it's strong opening feature. Well, that'll be a review for a another day…