Back in July 2007, a short unknown teaser trailer showing the “Statue of Liberty's” severed head hurtling down the street, was released to an unsuspecting viewing public that set the Internet forums ablaze with rumours and questions. It soon became apparent that the marketing team behind it demanded viral status. And that is exactly what they got. The hype machine quickly set in motion as the clamour reached fever-pitch levels until the next “sliver” of information was revealed via a string of short mysterious YouTube clips. I remember only too well the excitement at what in the hell this upcoming movie was going to deliver. Soon after, the official trailer came out to fit together the final pieces of the puzzle. It seemed to be a documentary-styled Godzilla type monster movie. Being a huge fan of both genres, I simply could not wait to see the finished article. So, it begs the question, was the behemoth hype machine justified by the film itself? 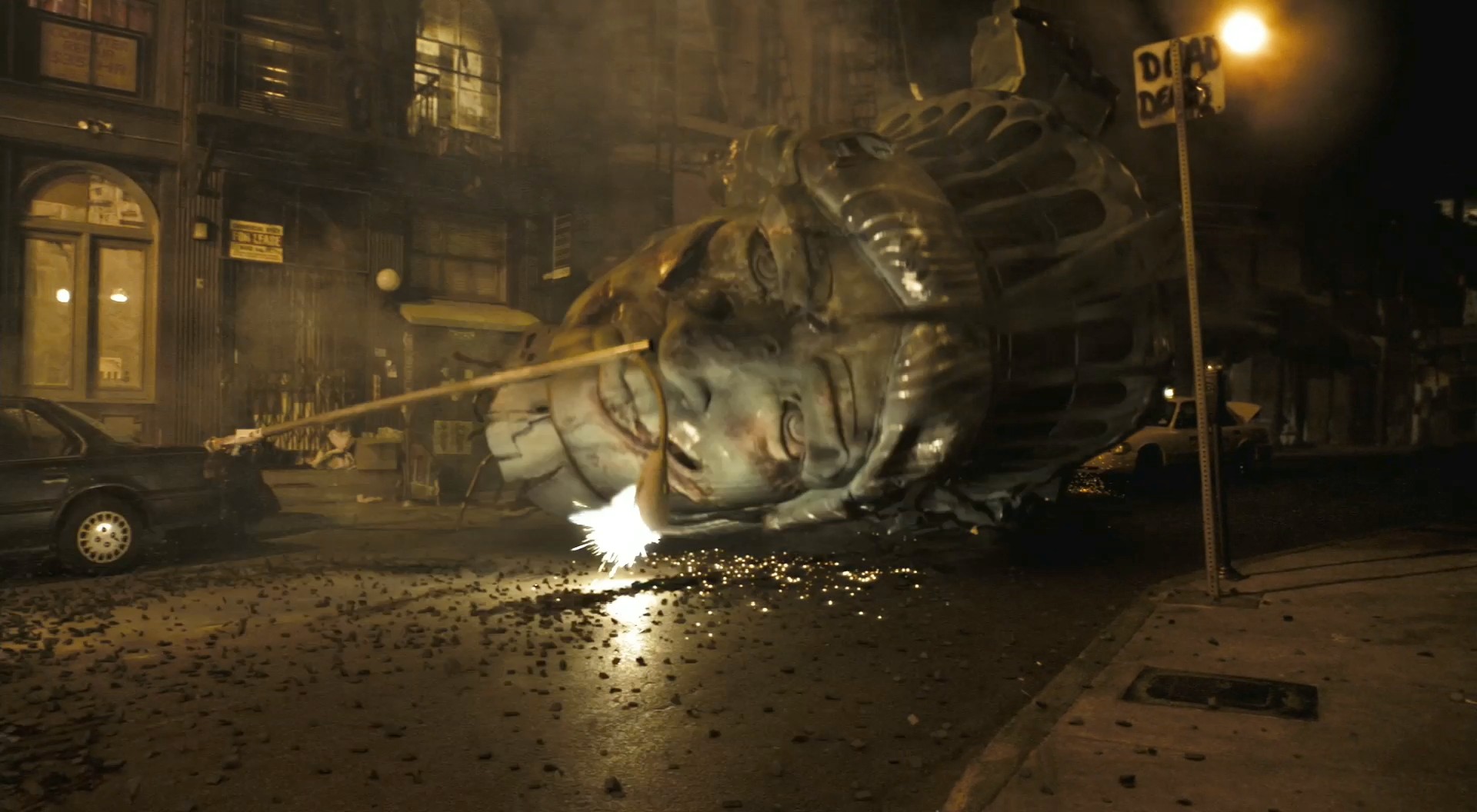 The film clarifies early on that the following is pre-recording footage retrieved from the location “formerly known as Central Park”. It shows taped footage of the final day two ex-lovers, Rob (Michael Stahl-David) and Beth (Odette Yustmans) spend together, interspersed with the “actual” main Cloverfield attack event taking place. So, in essence, it’s two separate recordings intermittently overwriting each other at irregular intervals. Though the main footage throughout the movie concerns the latter, which I’ll be referring to from now on. Rob, now single again, decides to emigrate to Japan and has a surprise leaving do organised by his friends. During the party, Beth shows up with her new boyfriend whilst Rob struggles to come to terms with this. Midway through the social gathering, there is power outage which results in a huge explosion not too far away from where they are. “Something”, it appears, is causing massive devastation just a few blocks down. As the group leave the building and run out into the street, the now well-known “Statue of Liberty” scene plays out as well as other skyscrapers collapsing into nothing but rubble. What ensues is a fight for survival as the friends attempt to make their way through the city to safety in the midst of an all-out extraterrestrial war. There was no two ways about it. I was mega-pumped to check out this movie following their phenomenally successful marketing campaign. The entire production was so ingenuously shrouded in secrecy that nobody had any idea what they were about to witness. Well, me being "floored" would be an understatement. This movie delivered by the bucket load. The key formula to this movie doing as well as it did was ironically what made their viral strategy so triumphant. Less is more being the order of the day. For the duration of its runtime, the movie continuously offers up little nuggets of information to the viewer. This gives us a similar sense of “lacking crucial knowledge” that our protagonists also suffer. In essence, we are almost down there with them the whole time. The isolation, the intense panic, those terrifying vague sightings of the creature in the distance. It’s all very exhilarating stuff and the atmospheric effectiveness pulled off with aplomb. The searing tension strewn right the way from about the twenty-minute mark all the way up to a very dramatic conclusion, is a huge achievement in itself. This certainly was a nurtured labour of love from the great direction and vision of J. J. Abrams. 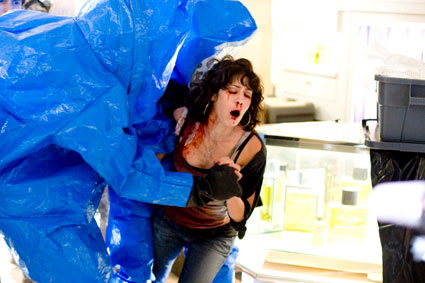 Another great feature of this film are the “easter eggs” intentionally tucked away in the background during many scenes. To find out where they are and how to spot them, “Google” is your one-stop shop to do so. Such as one particular key moment where our group are filming on their camcorder and manage to capture another person filming the very same thing on their equipment, yet from their own unique perspective. Ingenuity like that begs for a sequel for which fans have been hounding Abrams for years. Well, we did in fact finally get one. Well, sort of. Just a little different to what we were all expecting. But more on that in next review following shortly after this. The creature effects are also every bit as disturbing and shocking as you’d want them to be with a film of this nature. I feel there is little this movie gets wrong. If there is any criticism to be cited against it, that would be the “shaky cam” effect which may put some people off. But overall, you’d be missing out on a monster movie classic and one that will be revered for many a year to come.

I don’t think this will be of any surprise at all. This movie blew me away and I consider it an instant classic. If the genre isn’t for you, well, not much can be done about that. But from a technical and cinematic standpoint, this was a ground breaker. At the time of it’s release, nothing like it had ever been projected onto the big screen. Still a “one of its kind”, I literally cannot recommend this highly enough. “Godzilla on steroids” would be putting it mildly…

I am yet to see this movie but with your review, indeed, I am getting curious. I should see it. You did a great job here. Cheers!

Thanks for your kind words. And yes, this movie was a real innovation when it first came out. A real classic in every sense of the word...