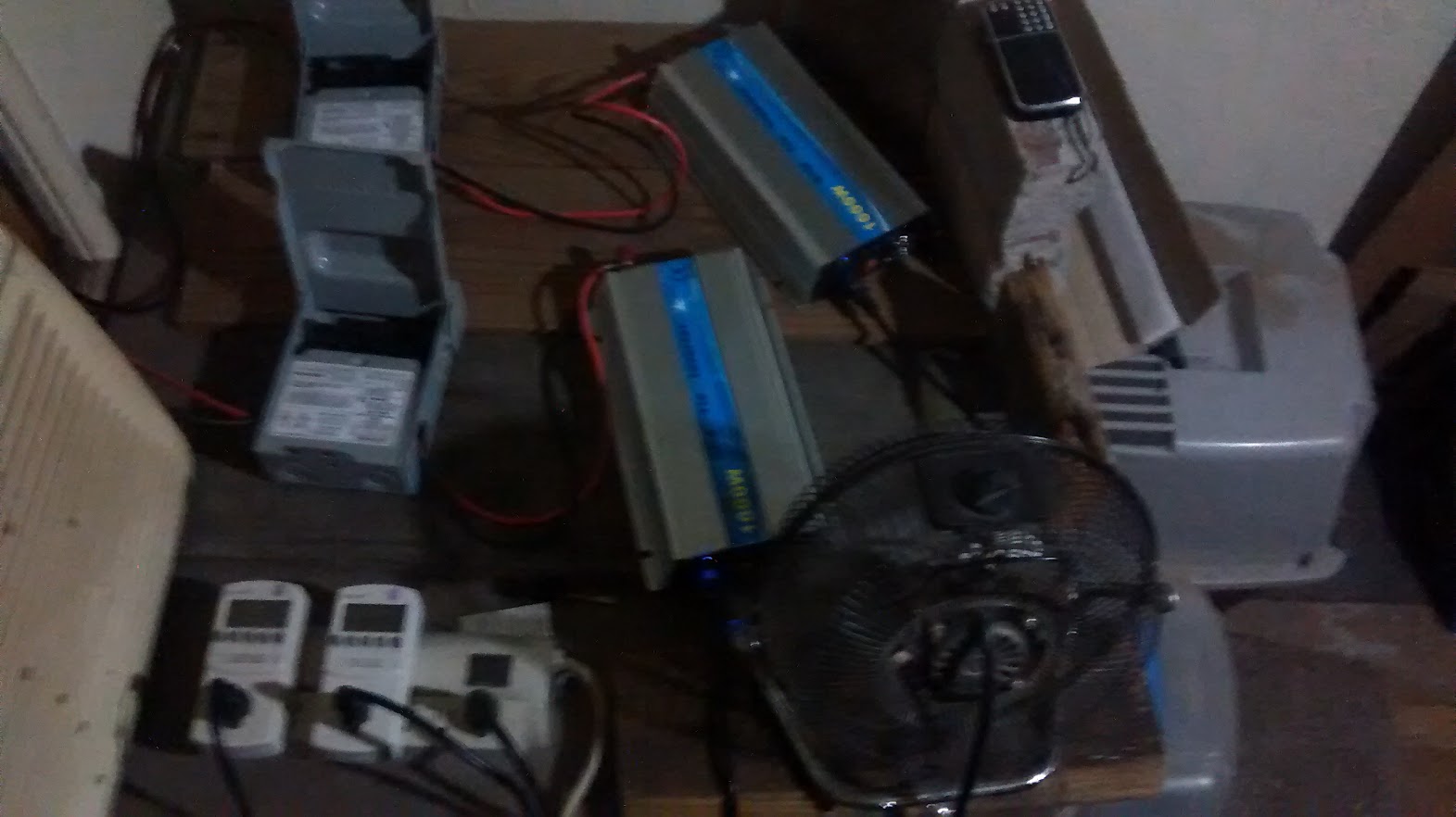 Power that needs to be plugged into the wall. It is the way of the grid tie inverters. Yes, the power gets warm and you don't want it too warm, do you? This is when a fan can help, on a low spin of the fan.

Just a low spin will help and the aluminum will go from warm to less warm. Bricks to cause the air to curve from the fan around the second grid tie inverter. The first grid tie inverter will get the full force of the wind of the fan and will be cooler than the second.

Two, one thousand watt grid tie inverters to support some panels, two circuits of solar panels. Two pull out disconnects just in case the energy needs to be cut fast, a safety feature.

One pull out disconnect for each grid tie inverter that is connected to their own circuit of panels.

One circuit of panels provide more energy than the other with the same number of panels, and what is the difference? The difference is the longer the wire on the DC, the more resistance and thus a little less energy.

Panels wired in parallel. It was my choice and works better for the kind of grid tie inverters that I have.

Notice the grid ties are connected to Kill A Watt meters. This way I know how much each grid tie inverter is producing.

I add it up in my head and walk out side and check the grid meter. I rather not have any of it go to the grid, so to keep the grid delivering to me and not the grid receiving from me.

This is why I must calculate the computers that are working and how much energy each is using along with my other household home uses. Each computer mining the Raven crypto and getting paid in Bitcoin. Raven coin in my case as my graphic cards were bench marked and it found the Raven coin would be what my equipment will most likely mine, then it is eventually exchanged, Raven for Bitcoin.

Well, I know little of such things, but I will let it run that way. If each computer can make 70 cents a day then, that was a good day. Save it all for when I get old. Want to mine crypto and get paid in Bitcoin? Try this link: https://www.betterhash.net/?ref=106932. 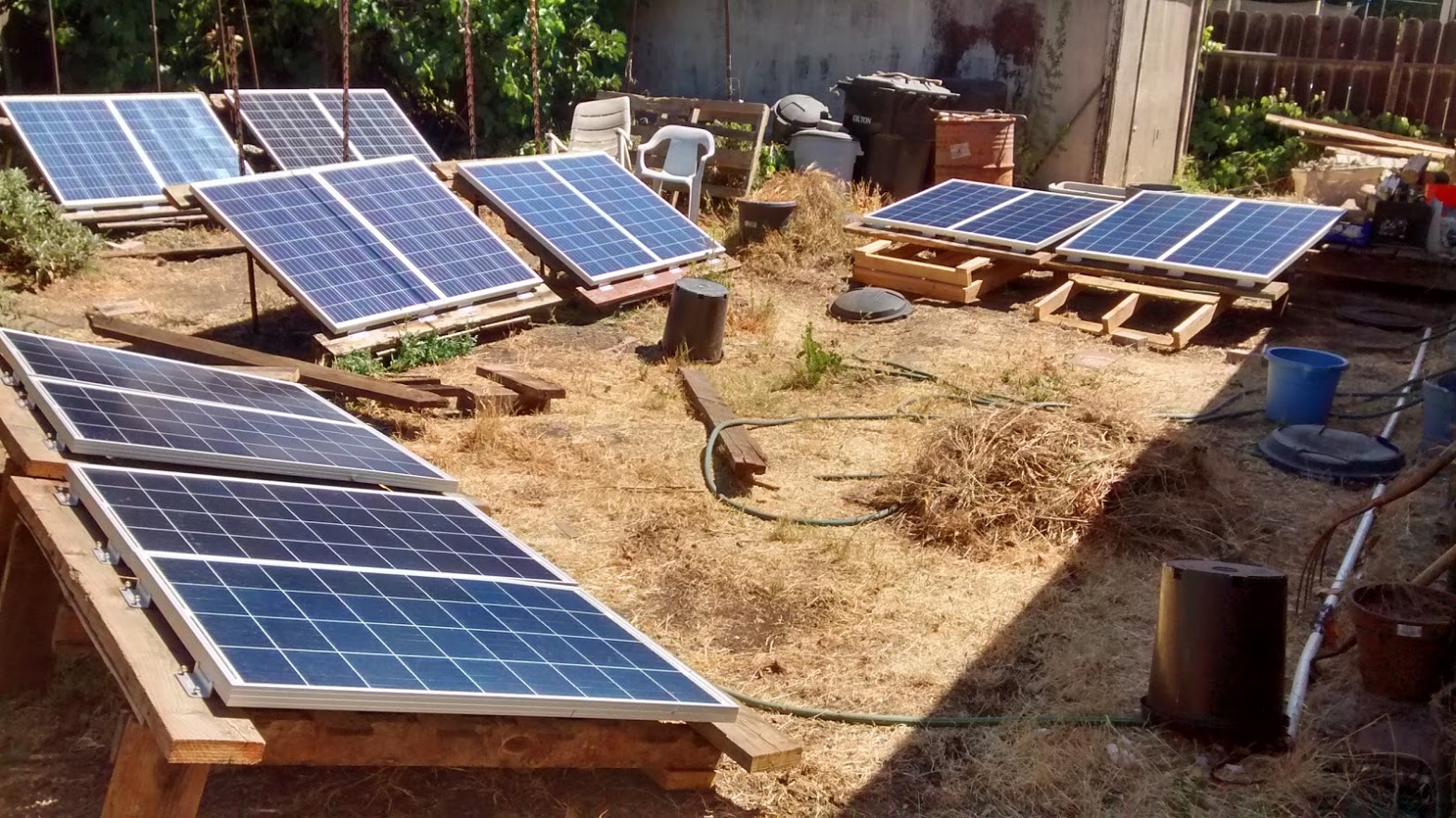 Solar panels attached to old pallets and pieces of my old deck. Lumber went up since Biden. Since my deck was falling apart I took most of it down, but have a lot of useful boards left and are put to good use with pallets that people didn't want to keep. Sure why not use them? Also I shut down most of the computers, before the shade over takes the panels, then the next day turn on the computers again when the sun can energize the computers again.

I may increase the number of my solar panels as I may want to increase the number of computers with their graphic cards. Used 64-bit Windows 10 computers are easy to buy from ebay. It is just that the graphic cards went up. I bought a few GTX GeForce 1650's for only 164 dollars before tax back in 2019. Now the same thing is on sale in Amazon for about 371 dollars, the exact same thing. Inflation or is it just price gouging as in 2019 Bitcoin was low as compared to today as I write?

Well, it is what it costs. Like the price of gas for the car. That is the price and if you want it, you will have to pay to get it. At least I got a few graphic cards that work well and at a good price, back in 2019.

Let's end with a scripture, as it is written, Let us hear the conclusion of the whole matter: Fear God, and keep his commandments: for this the whole of man. Ecclesiastes 12:13.

If you enjoyed this blog, please upvote and follow.
Thank you, David.
Images are mine, taken with my Moto G.