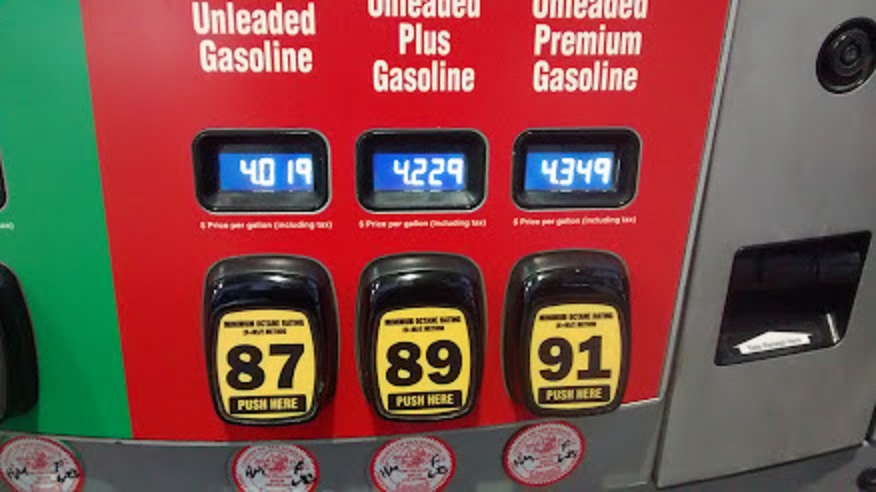 I bought the cheaper, unleaded gas and this is the cash price. If one wanted to use his credit card then the price is 10 cent higher per gallon.

When I was young I would use a lot of gas. I would drive all the time, but now that I am retired, I try not to drive too much. Well for most who retire, the pension is not like when one was working, so it is good to save money whenever one can.

I know with the heat of the summer, I just wanted to stay home, even when I wanted to get some groceries. I would think, I don't really need to go out, I'll just eat what is in the house.

For those days I was eating stuff like canned foods and mac and cheese products. Stuff I don't eat that much. Well, I ate all my apples and eggs and other things, but I didn't want to go out on a hot day.

Well, I did go out today and got a couple of bags of organic apples for only $1.99 a bag. That was at the 99 Cent Only Store.

Then I went to another store I like to go to called, Curry's. They had sliced ham for sandwiches at 2 for a dollar. I always try to take advantage of that deal as those are cheap cause they are close to date, but they do have them frozen and I like them, they taste good. They also had a sale of 30 eggs for $1.99. They were small eggs, but they were eggs and I was out of eggs, so I bought 2 flats of those eggs.

Notice I mostly go to what they call, discount stores. I also went to a place called, Dollar Tree. I bought three 10 ounce bags of frozen blueberries. I like frozen blueberries and especially on hot days where I want to cool off. Of course blueberries are high in vitamin C. The vitamin that does things that most people don't know.

Did you know that if a man is lacking in vitamin C, his sperm may stick together, like they got in grid lock? Vitamin C can help to separate the sperm to do what it is meant to do, to be fruitful and multiply. It is what God told Noah and his family, as it is written, And God blessed Noah and his sons, and said unto them, Be fruitful, and multiply, and replenish the earth. Genesis 9:1.

So anyway I did get some gas and I haven't seen the price of gas this high in a long time.

Let's end with a scripture, as it is written, I have more understanding than all my teachers: for thy testimonies my meditation. Psalm 119:99.