No, it’s not Hammer Time! It’s time for another Solairitas Weekly News Update!!

A bit of a slower week this week; no SOL sold. 😢

Sadly, we are losing another member, and the buy order I had placed got filled again. We lost axeman (at least he’s selling what he has), but it’s totally understandable considering how unfairly he was treated on this chain.

I have placed another standing buy order for 20 SOL at .9 HIVE to offer an opportunity to leave, should anyone wish to do so.

Initially, faced with the question of how to deal with bought-back tokens, I figured it best to place them for sale again so that someone else could join and they’d remain in circulation. I figured it was no harm, no foul since I am the one making up the difference (the proceeds from the sale were already powered up to the Project).

However, I realized that this actually runs contrary to our goal of completing Phase 2...to illustrate, theoretically (in the extreme), we could get stuck in a loop buying back and reselling the same token over and over, never selling the first ten thousand tokens.

We could resell tokens and shift the Phase 2 goal from ten thousand tokens to ten thousand HP, but author and curation rewards are meant to be bonus over and above the token sales (budget), so since I did properly buy them back myself, I added them to my (definethedollar) balance.

Solairibot continues to do its thing. It now has 186.591 HP on its own and will be released for testing soon™️. For the time being, it will keep on trailing, but it’s definitely growing faster now. I’m looking to run a witness node, so I might be able to have the bot running on that machine, we’ll have to see.

We are still saving HBD and are currently at 8.628 HBD. While my intention had been to submit a funding proposal, once again looking at those that are and those that are not being funded, I am abandoning this idea. It still remains to decide what to do with those funds. One member has suggested putting it into our dCity, and I really do think that’s a wise choice at this point, but I welcome other ideas as well for long-term investment.

Our dCity continues to grow. This week we purchased a Law Firm to reduce the impact of taxes on our city, as well as a Forest and a Park. While I recognize that Banks carry the risk of being robbed (and we may well pay for it later on), our crime rate is only six percent, so it was a calculated risk against quickly boosting our income getting started. So far it’s paid off well, but we may sell them out for something else if/when robberies become a problem. We also receive additional SIM from our BRO holdings, from TAN, and from Dhedge as well!

As of yet we still haven’t seen any return from the LBI tokens I purchased, but after some research, it appears that the LEO distributions won’t begin until sometime this month. I’m somewhat beyond being disappointed with this one, but going to wait for the first payout at least before I throw in the towel.

Another additional sixty thousand SPORTS or so have been staked this week, pushing us solidly up over two and a quarter million tokens!

I continue to stake my LEO to the Project as well as NEOXAG, PAL, BATTLE, SPT, STEM, and any other liquid tokens I get that may benefit members.

I also invested in 200 Dhedge for the Project. This means we now receive drips of all kinds of tokens. I think the return is around 15% per year, but that does depend on a demand to be present for the tokens on H-E. In the time we have held them (about two weeks now), we have gotten around .1 HIVE value in return, going to take a very long time to break even, but hopefully it will grow with time as well.

We also got INCOME tokens which finally moved over from Steem! These aren’t guaranteed income every day, but we’ve already received a couple HIVE divvies just in the first few days since the transition. Moar Power!!!! It’s not a whole heck of a lot, but every bit helps. 😁

Surprise, surprise our HUSTLER token holding are actually worth $.03 now! Maybe they’re going to do something?!

I want to reiterate again that no tokens have ever been purchased with funds from SOL token sales, nor have SOL token sales ever been used to buy back tokens. As promised, proceeds from sales have been and always will be powered up to grow our vote or be used to build the physical Project. It's alright. Over time I'm sure people will come and go (hopefully not too many going though 😄). It wasn't that he was upset about the Project, I don't think, just divesting from Hive altogether.

Isn't @ditlev behind the beer project??

Initially, faced with the question of how to deal with bought-back tokens, I figured it best to place them for sale again so that someone else could join and they’d remain in circulation

I guess this is a good idea up to a point. Since the project is going nowhere it would be nice if you just had them burned. But would wait for it some time more.

It would be wise to set buy offers at lower prices as well.

I'm happy you followed my suggestion about LBI, it will be beneficial in long term.

I wouldn't say the Project is going nowhere, it's growing all the time, just slowly. I had hoped that eventually 10,000 people (max, give or take) would throw in $20-$30 (some more, some less)...that would get us close to budget, but it seems, so far, that around fifty people want to see a return from throwing in a dollar or two, can't buy too many solar panels with that.

Even so, the time to break even is around 40 posts (at 50% vote) not counting any of the token curation, which isn’t bad considering we’re still in the initial phase of building HP.

100,000 tokens ultimately represents a 100% upvote and so none will ever be burned (at least by me). Burning tokens simply demonstrates a failure to properly consider supply.

Time will tell if LBI was worth it. So far, not so much, but the Project is meant to be here long term.

I understand, and this is why I am also sticking to the project and keep on advertising it to people around me. I know the project is growing despite mediocre demand.
The issue is that bigger players are reluctant because of possible downvotes because of 'paid' autovote service. They are behaving like those big corporations that don't want to offend anyone. 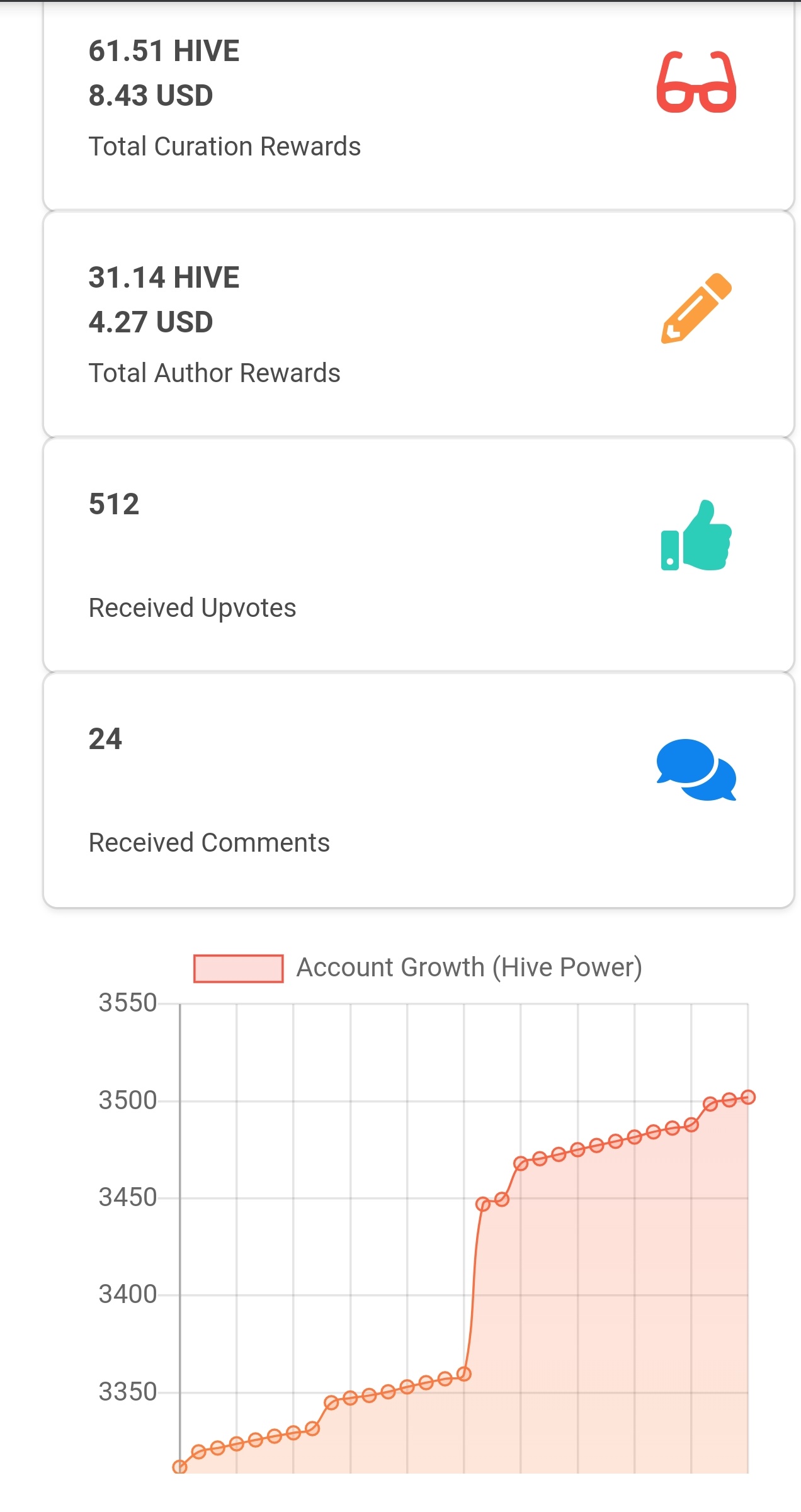 Btw I'm for moving all HBD to dcity

@misterengagement 57
8 months ago
Thank you for your engagement on this post, you have recieved ENGAGE tokens.
0
0
0.000
Reply

While my intention had been to submit a funding proposal, once again looking at those that are and those that are not being funded, I am abandoning this idea.

DHF will play huge role in the future of HIVE. In my opinion, we must keep coming up ideas and project that help grow our HIVE network

In the end SOL can become anything.

At least Dcity investment is going well. I still think putting the HBD into Dcity would be a good move.

I'm definitely inclined to agree, and considering those are as much (actually more) your contribution than anyone else, it's basically decided. Of the options I'm currently aware, it seems the best; just wanted to be open in case there was another opportunity someone else knew about.

I wouldn't mind the HBD going into dcity at all :)

Try adding your reports via LeoFinance.
What is more, I thought that #ctp is the correct tag.
I would try using use aeneas, lassecash also.

Thanks for pointing that out! I didn't realize I wasn't posting CTP. 😢 Fixed that and added the Aeneas tag to give it a shot. 👍☀️

Hey @sk1920, here is a little bit of BEER from @solairitas for you. Enjoy it!

Congratulations @solairitas! You have completed the following achievement on the Hive blockchain and have been rewarded with new badge(s) :