Devil's advocacy as the transient remedy for an eventual Steemtronized future.

Yeah! Devil's advocacy plus a ton of patience & a true truckload of plenty thoughtful AAA adaptation is fundamental and key here in this situation.

Well, today is friday. Certainly close to Sunday. But in relation to patience, I can't wait till Sunday to resurrect an old post for a Showcase-Sunday rant.

Therefore, for now, let's call this article a 'Showcase-Friday' ramble to try Repost a forgotten corpse buried in my blog of current relevance with the attempt to establish a mere standpoint on the ongoing Tronicsized affairs.

"To find the midpoint, you first have to know the extremes" like wake me up early everyday to go to work!! 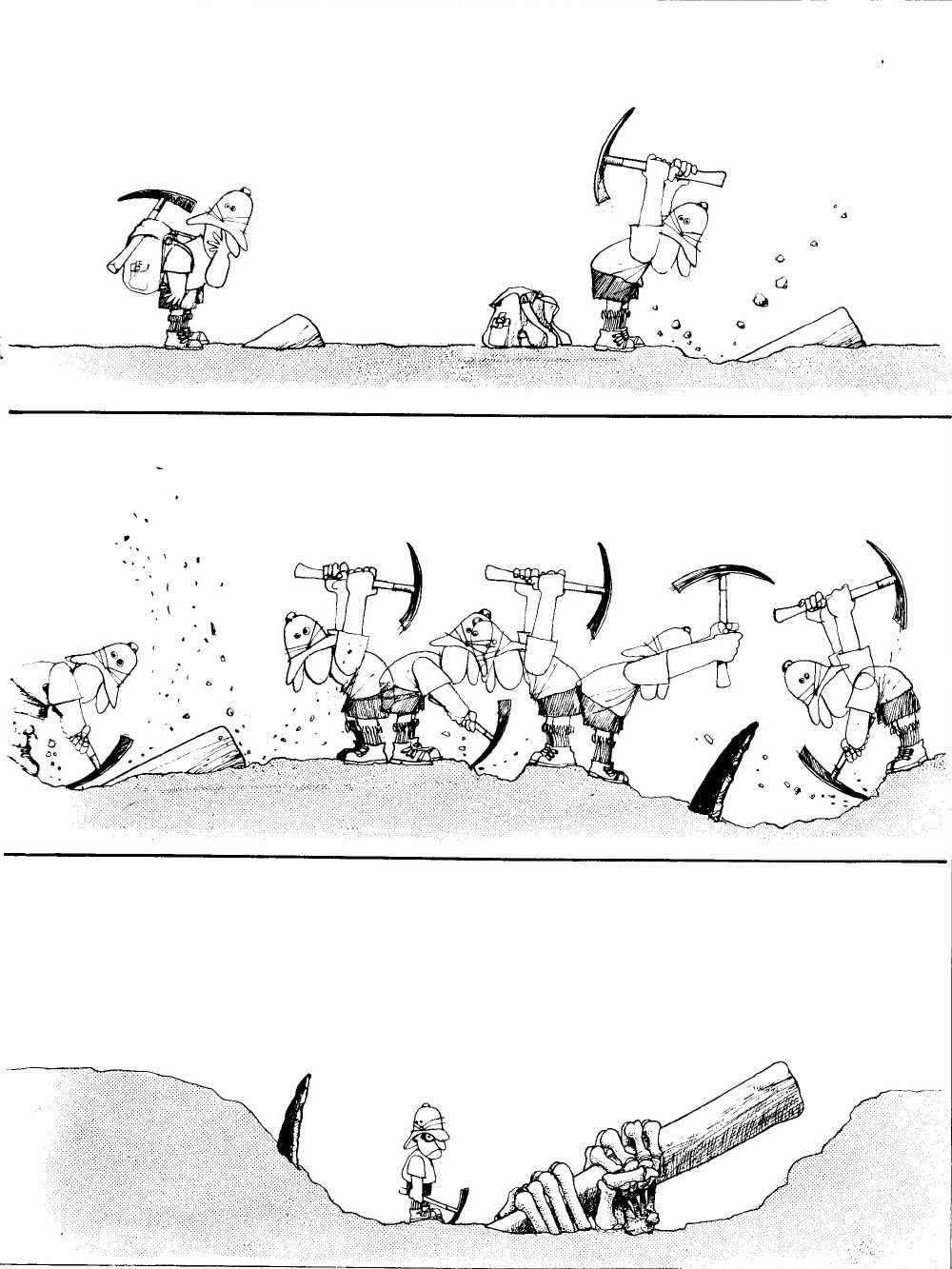 So, I almost can't wait until the imminent swap out steems for a tron token

...to play my mischievous and humorous pranks.

Because in front of the also imminent bullrun within the next days and months into the cryptoverse. Better we know how to ride very well these kind of wild beasts way way in advance like a masterful rodeo rider.

...which for these cases of uncertainty it really doesn't matter.
(By the way, I've been for more than three hours looking how to get rid of this flucking transaction error message waiting that this post finally will get recorded on the steem blockchain ledger immutably) So, without more ado.

...in these digital societies.

Come on! is that we fear even our own shadow now!!

Why is it that everyone and their pets always are trying to play the political correctness game at all cost in this current society?

Why most people are always so reluctant and allergic to play the role of a Devil's advocate in any massive people meetings and public gatherings?

Is this because they perceive that if they flow freely and without resistance unquestioningly along the dumbass mass of the wave thru and throughout the same sense, way and direction as the rest of the lemmings with whom they are running with side by side, they are gonna be free of troubles?

"A so addicting game, something that a person could mindlessly play and wake up days later wondering where his wife and kids have gone" Lemming mass suicide has been wrongly & mistakenly popularized like a long-standing truth, it's in fact a misleading myth. A fable!!

Given that in spite of what many people actually believe that lemmings commit mass suicide when they migrate, this is not the case. Driven by strong biological urges, they will migrate in large groupings when population density becomes too great.

But they are not as dumb as many out there would like to think they were.

Lemmings can and do swim and may choose to cross a body of water in search of a new habitat.

On occasions, and particularly in the case of the Norway lemmings in Scandinavia, large migrating groups will reach a cliff overlooking the ocean. They will stop until the urge to press on causes them to jump off the cliff and start swimming. They then can swim to exhaustion and death. Lemmings are also often pushed into the sea as more and more lemmings arrive at the shore.

Many are even smarter and canny than you thought.

¡They Certainly Have Their Tricky Paraphernalia! Yeah! they aren't retards whatsoever. But due to the association with this odd behavior, lemming 'suicide' is a frequently-used metaphor in reference to people who use to go along unquestioningly with the popular opinion. With too often potentially dangerous or fatal consequences.

Ok, but where were we?

Where does all this long lemmings rant comes from? Oh! playing Devil's advocate roles. Remember? Right!

Those irritating in-house critics who can prevent blunders if most of them simply were fairly appreciated, just recognized their paradoxical valuable contributions, managed smartly and given often a fair voice.

Yeah! admittedly, there is always someone around who chooses to take an unpopular position they know will be 'socially' unacceptable.

And occasionally, it’s also someone who just likes to argue, and will take an opposite position from the group solely to stir up the pot and generate a bit of controversy. But, if used effectively, the concept of devil’s advocacy can be also incredibly constructive.

Who else are those who usually invite us to think outside the box? It has been said and indeed not much known, that through research into thousands of innovation efforts, it finds that having a devil’s advocate that is responsible for raising tough questions in a constructive way is critical for success. Every company attempting to innovate needs some version of a devil’s advocate. Both, basically to head off problems and to bring out the best efforts of the organization.

The devil’s advocate helps bring to the surface issues that might otherwise be ignored. It ensures that issues, once raised, are addressed and not just glossed over as a project gains momentum.

It makes sense to have a devil’s advocate challenge whether you’ve actually laid out truly innovative scenarios or are just only considering incremental scenarios that obscure both problems and opportunities.

An effective devil’s advocate frames the most important questions that need to be answered before a disruptive innovation is attempted at scale.
The devil's advocate also usually guides the processes, making sure that the right amount of uncertainty is reduced at each step.

Certainly everyone will have to agree on when a devil’s advocate should be involved. And whether if insiders or outsiders will play the role. And more important, how the role must be played out.

If you wait until you are in the heat of a moment. When a critical decision is being made on a real, live innovation program... everyone already will have chosen sides. Which is never really desirable.

However, as things stand, usually many companies like the theory of devil’s advocacy, but almost never implement it. ¿Why will it be?

Yeah, too often these processes becomes a game of gotcha. Some people will win, but others will lose. The process may generate so much tension that people will shy away from it. And perhaps, subsequent retention and onboarding problems might arise within the projects.

Yep! that's true. It may very well not look like my habitual content. But this doesn't mean that I've moved too far away from the usual type of content with which I always try to make you think deeper about many things.

After all, already at the threshold of a new end of the year. Me, with way more than three years over my shoulders actively participating in a highly disruptive community and blockchain based economic digital society.

And already at the gates of finally see consolidated the long-awaited serie of promises, improvements and features around a digital environment where most of us are making a living day in day out devoting time, effort, blood, sweat, tears and plenty faith and hopes that this remote island that floats over the vast and wide ocean of the internet.

I suspect that everyone would want to know, have a glimpse and make sure. If this might be true that Hivemind Communities, SMTs, Web 3.0, Industry 4.0 and Humanity 5.0 can be successfully implemented in what appears to be a fertile and thriving land for our future and that of many others for the years yet to come.

Yep, just to say something. Because regardless of mirages and rumors that if Justin Sun has acquired our little fantasy island within the blockchain and cryptocurrency world or not. I would say that it is always appropriate and highly commendable have a good army of sane devil's advocates who dare to point out what a great majority will not.

That's right. It will always be a matter of perspectives. But never forget that in order for you to notice some balance in the bascule, there will always have to be weight on both ends and on both sides of the contraption. };)

Since we are already at the doorstep of a new relaxed weekend. I dunno, but maybe, just maybe you would like to watch this documentary about some irrefutable truths about the lemmings and several other animals.

««NOTE»»
"This Article Will Be Edited To Add More Tags"
Leave a comment. Share your experiences and feedback. ¡Be part of the conversation!

Submit
0.00 PAL
46 votes
0
Authors get paid when people like you upvote their post.If you enjoyed what you read here, create your account today and start earning FREE STEEM!