The Most Commented Authors on Hive | Authors with the most comments received and made!

We have all heard of it! Commenting, engaging, feedback! That is the most important aspect for the Hive community and the social networks in general. Engagement comes first, monetization second. 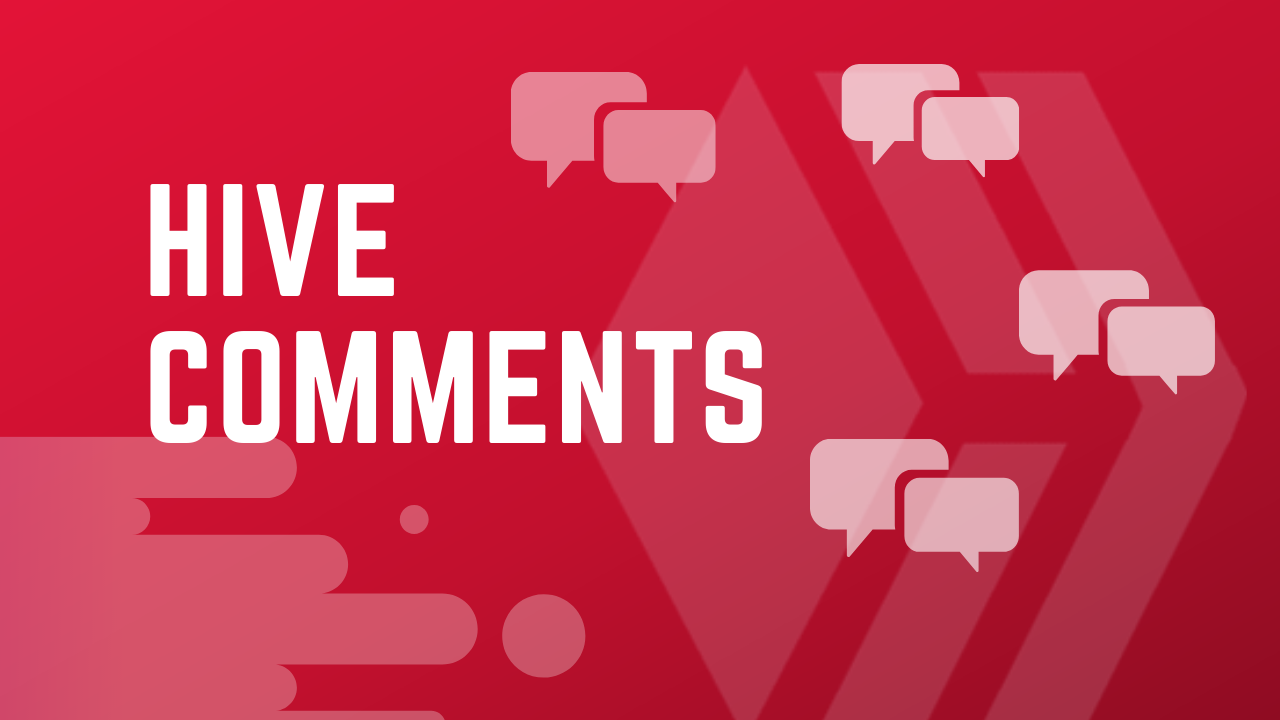 Having in mind the importance of comments we should know which authors have the most comments on their posts.
Where all the discussion happens?
We will be looking for the last 30 days period starting from July 26th till august 25th.

Authors with the largest numbers of comments recieved Note that some of the comments received are from bots, etc, but I think the above shows quite an accurate picture. Also the numbers above include the self comments as well.

Here is the chart for the average number of comments received per post for the top authors. 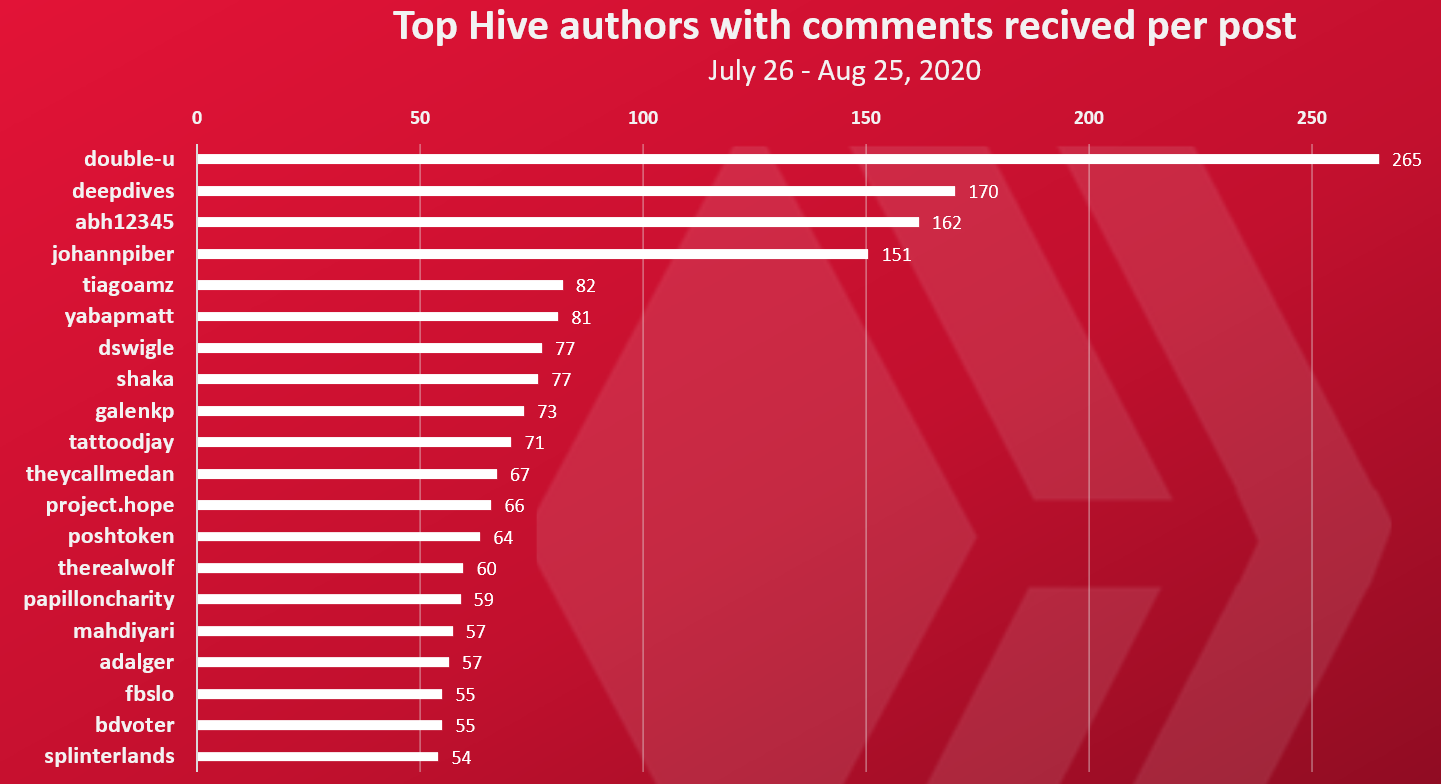 Authors that commented the most

Next lets take a look who commented the most. Here is the chart. @galenkp comes first here as well with more than 2k comments. Talking about engagement 😊.
@johannpiber comes second with around 1.5k comments made and on the third place @papilloncharity.

Great job from the authors above for enagagement!

@galenkp is smashing it with the level of engagement.

I am glad there is some correlation between comments received and comments made by at least some of the authors :)

One thing that probably needs a reference is the average comments received per post, as it doesn't really tell much without knowing the number of posts included in the selection.

These are great to see, thanks!

@galenkp is a beast :)
You are also in the top!
Here is the data for the number of posts and comments per post. 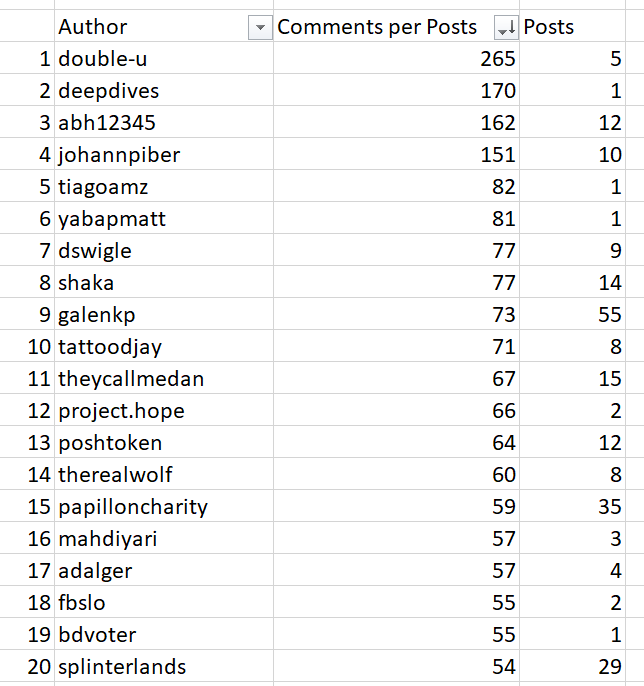 And I love to see @russellstockley @pixiepost and @flaxz up on those lists too...These guys bust their butts to make engagement as a priority here.

How did I miss this?? Wow that IS awesome! Congrats to everyone who made it on the list. I am humbled to be a small part of it!

Thanks for the shout out Jon! And special congrats to Russ & Erik! :) 💚

Thanks!
Also congrats to the ones mentioned :)

Thanks for the mention, and nice to have made the list.

Thanks, and great to see you back on the blockchain, it's been a while, welcome back.

Every time I see you comment, I initially think ... wait,I don't remember responding to this.

That's funny. Good thing there are ways to tell the difference! 😂

Thank you kindly for this.
So glad always to see many of our friends on the lists.
Just thankful that we could make it on any list and congrats once again to the top performers. That G-Dog @galenkp is certainly a great act.
To us this is not a race, or a competition, but rather just keeping our efforts and output steady.

Thank you again for this @dalz

I'm on the charts! Engagement is what keeps the Hive world turning! Congrats to everyone out there commenting and making Hive such a great place to be! ❤️

It's pretty neat to see there being quite a lot of engagement between authors, and their audiences. I think @galenkp's weekend engagement initiative really helped, while bringing bucket loads of fun, laughter, and enjoyment in the comments section :-D

Thanks for you great work with these stats, and nice to see that I made the list.

You are welcome!
Also congrats!

Wow, I didn't think that I have such high numbers 😃
Thank you very much, @dalz, and congrats to all on the list 😊

If there is no Discord then these numbers would be 100X

@johannpiber wrote lately about: Romantic Morning | Photofeed Editing Masters 4 - Contribution By @Johannpiber Feel free to follow @johannpiber if you like it :)

Hey @dalz, here is a little bit of BEER from @johannpiber for you. Enjoy it!

Congrats to all.
"Authors that commented the most" top place @galenkp with 2127 comments WOW

Great stats and interesting to see who is active in different areas, will definately be keeping an eye on these lists :) Thanks for all your work

Interesting statistics. Engagement builds relationships and they bring a user a greater sense of enjoyment, fulfillment and sense of belonging.

Engagement builds relationships and they bring a user a greater sense of enjoyment, fulfillment and sense of belonging.

I'm a bit of an engaged I guess...I outbound-engage a lot, makes sense that the comments come back, sometimes. 😉

Nice looking into the engagement leaders.