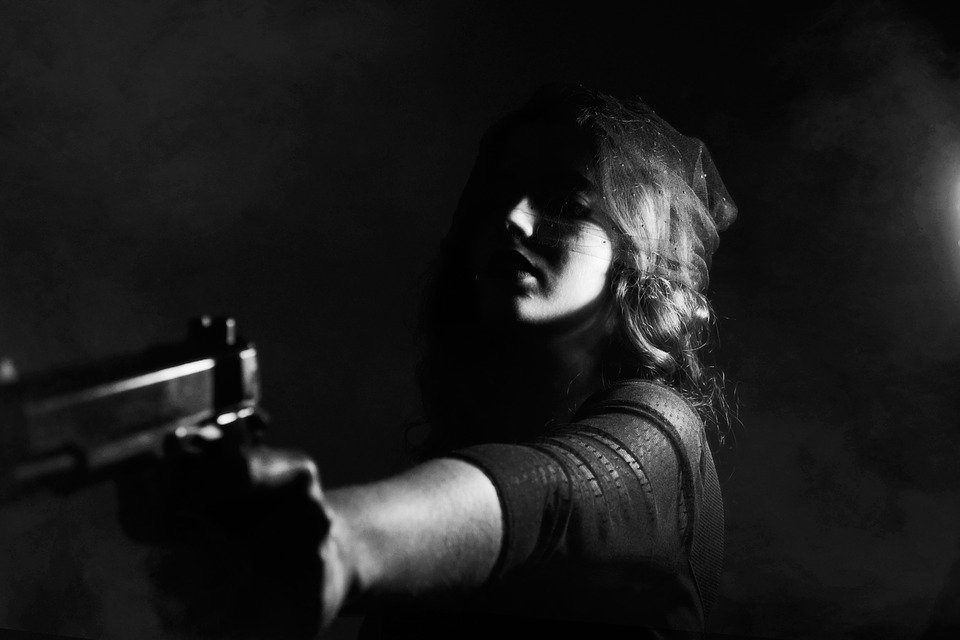 The club was rowdy and lively as usual, music was pumping out the speakers, people were dancing their hearts out. At strategic points, strippers were wrapped around poles as waiters carried drinks around. It was just another night at the club, huge amount of money were changing hands. Or so it seemed.

To a trained observer, the tension in the air would have been obvious right from the gate. The moves of the dancers were mechanical and without much heart, the strippers were not too focused on pleasing the crowd that was also not interested in them. Everything was not alright.
Each of the waiters walking about had a loaded. 44 hidden under her tray. Same as every dancer on the floor. For each stripper, there was a submachine gun hidden just beside her stage, within easy reach. And for Bartender, on his side of the cabinet was a loaded shotgun. Every bouncer had an SMG tucked into his suit. Every single person in that club was armed and ready.
For war.

form above, at the VIP section, Bruce the owner of the club looked down and nodded his head in contentment. Everyone of them worked for him, none of them were customers.
He turned as his right-hand man approached him.

“Boss, fifteen minutes have passed now. Are you sure we can trust this guy?”

Gustav only shrugged. He had two Glocks tucked into his belt, his favorite. While his boss had a gold plaited Beretta in his belt.
They were expecting an attack from a rival drug cartel who were looking to take out all opposition in the area. What they didn't know was that Bruce has planted a mole in the rival cartel and his mole had reported back that there would be an attack today.

Quickly, Bruce had emptied the club of its customers and then replaced them with his people. He wanted it so that when the rivals came they would be badly outgunned. And now, twenty minutes past the time his mole had given they had still not turned up.

“They’re here boss.” A voice said in his ear. It was one of the bouncers on the comm

“Everyone take positions.”
The people kept dancing, going about their disguise as they kept a watchful eye. Still above, Bruce watched calmly. He hated violence and hated what he was about to do. But he lived a life of crime and these things were bound to happen one day or another.

When the rivals entered the club, everyone knew it. But the atmosphere didn't change. He was still charged with electricity, men and women still dancing, strippers sliding up and down the poles, music blasting the eardrums. The rivals walked in, they were about seven in number, one of their hands was covered by their jacket, hiding their submachine guns from view.
Bruce watched them, knowing he was the target he stayed in plain sight so they would see him quickly. But the way he was positioned, they had to go into the club, far from any exit before they would see him. So they forged on, looking around for the Boss, until they saw him, up there at the VIP section. In tandem, the seven guys stopped and pulled out their weapons, pointing it at him.

Immediately, the world turned upside down as all the dancing stopped and deadly weapon appeared. Waiters threw their trays away and raised up their .44s. The bartender cocked his shot gun even as the strippers picked their sub machine gun and pointed the business ends at the rivals.
The only thing that kept playing was the music.

The attack was over in seconds the music muffling the guns shots and the bodies of the rivals were splayed over the club floors. Some of the dancers carried them out to the back to the vehicle that would properly dispose them off. The floors were cleaned of blood, along with any other surface that may have gotten stained. Bullet holes were patched up immediately.
In thirty minutes, the club was open for business once again and the first customers trickled in, complaining for the late service.

“You see,” Bruce told Gustav, smiling as he slid his Beretta back into his belt “that’s how the boss get things done.”

Well, @ubani1, that is certainly an action story! Quite visual the way you describe it. All that gun play. Bruce took a chance, and won. This story does have a bit of blood. You have to be careful when you write violent scenes here but we let this pass because it wasn't really gory.

Your descriptions of motivation are clear, and the story arc is strong. We appreciate that you post your stories in the Ink Well community. Please be sure to read the work of other writers in the community and share comments with them. We are urging everyone who posts in The Ink Well to take this step, going forward, to ensure our community members are supporting one another. (We also have this in The Ink Well community rules on our home page and in our weekly writing prompts.) Thank you!

This is an action fictional story. At first it seemed a bit like a movie story to me. And I was waiting for the opponent to come and fight. Anyway well written.

I don't really like mafia or gangsters stories, but this one has something catchy. I read It all.

I was going to say that I love it when the bad guys go down in flames, but in this case even the good guys are bad guys! Ha ha. Fiction is funny that way, isn't it? We find ourselves separating people into right and wrong, good and evil, even if the "good guys" are only in that category because we've come to know them.

What an interesting, action-packed story! Gustav watched and learned first hand how to handle drug rivalry business. Too bad no one from the rival's team survived.