The Gator and I

@bruno-kema 62
5 months ago
The Ink Well 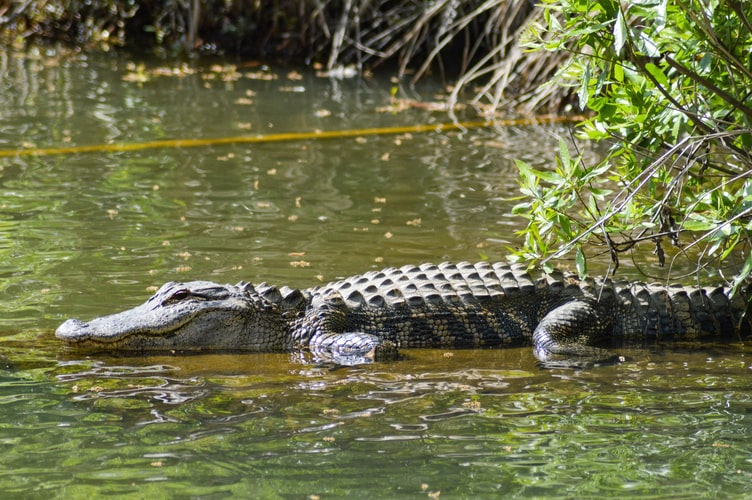 "Watch your step, David." My sister warned as I went in search of the herb.

We were in search of a rare herb we needed for our school project. The Oleifera Sabdarifa was a reddish-brown scented flower whose nectar could cure almost all ailments known to man. Almost. And the herb was in only one place in the whole of Nigeria. On the shores of the Watery Lake. Here in Bayelsa.

That shouldn't have been a problem, except that it was also home to a giant alligator.

And now, as I searched for the herb, I could see the gator calmly swimming, ignoring us. The only part of it I could see was its eyes and nose, the rest were submerged in water.

The terrain was sloppy, with the flowers at the top and the lake at the bottom. Hence, my sister's warning.

"Found it!" She called out to me, I looked ahead and saw her standing beside the rare herb. It was hidden between two much larger hibiscus flowers.

I stepped on a stone that broke off at once. I lost my footing and the next second, I was tumbling down the sloppy ground towards the lake.

"David!!!" I heard my sister's scream as I kept rolling, my body slapping the ground repeatedly. Suddenly, I grabbed a rock jutting out of the ground, using it to halt my fall. My feet were dangling just above the lake.

I looked behind me, the alligator was still watching. But it was also moving towards me. Slowly and purposefully, as though it wasn't exactly sure of me yet. As it approached, it used its spiked tail to trash the water repeatedly.

"I'm fine," I called back as I pushed myself up and tried to get to my feet. I let go of the rock. And I found out why the place was called Watery Lake.

Too late, I took a step forward. And my legs slipped from underneath me. I fell hard on my back, tumbled once, and crashed into the lake.

As the cold water hit me, I felt panic set in. My heart began to race, it was difficult to think as I sank beneath the surface.

Getting myself back, I began to swim upward, stroke after stroke till I broke the surface. I coughed, gasping for breath.

I saw the alligator then, it was no longer slow. It was making a beeline for me, its tail swinging with dizzying speed, jaws wide open.

I began to swim towards the shore, making great splashes as the reptile chased me.

"David!" My sister screamed as she made her way down the slope, "stop swimming!"

What? I thought I didn't hear her well. I kept swimming as hard and fast as I could. I stole a glance and I realized I would never make it out.

"Don't move! It can't see you. It's using the disturbance you're causing in the water to chase you."

I turned slightly, floating as stationery as I could. The reptile kept coming towards me, its mouth was wide open I could see it's red tongue and white teeth. I could also hear the sound of the tail swishing through the water.

My heart was beating furiously as the gator closed in and stopped beside me. It's mouth finally closed as it began to search for the source of the disturbance. It was so close I could stretch out my hand and touch its scaly back. It began to circle me.

It knew I was still there, it just couldn't see me. And it didn't want me getting away. The only way for me to get out would be to distract it.

Still floating in the water, I could see my sister had the same thought. She was picking up a big rock.

"When I tell you to," she told me, her voice pitched with panic. "Swim like hell."

I didn't reply, I was too scared to even blink.

She lifted the rock and threw it with all her might as far away as possible.

As the rock crashed into the lake, the gator stopped circling. But it didn't move. It was torn between investigating the new disturbance and keeping me locked.

She picked another and threw it.

The alligator was becoming agitated. Its tail thrashed the water, splashing it all over me, its sharp scales barely slicing into my face. It still was not moving.

"It should go!" My sister cried in frustration, "why is it not moving?"

I could do nothing, only shiver in the cold water and pray.

Undeterred, she began to gather rocks, about ten of them. And she began to throw them, one after the other as quickly as possible. This kept the disturbance on long enough to convince the reptile. It began to swim towards the spot the stones were being hurled.

I began to swim hard and fast. My legs kicking furiously as I raced to the shore.

The alligator stopped halfway and turned to chase me. But my sister kept throwing rocks into the lake. And for a couple of seconds, the alligator was confused, not knowing which way to go. Buying me precious time so I could get to the shore and go up the slope.

I fell to the ground beside my sister, coughing and gasping for breath. I watched as it tried to come out, but gave up when she kept throwing rocks into the lake.

"Oh my God David," she cried, taking my face in her hands. "Are you hurt?"

"I'm fine," I told her, surprised I had made it out with barely a scratch. Except for the fact that my entire body was aching terribly from the fall. "You were awesome. How did you know the alligator won't see me?"

"Movies." She said simply as she helped me get to my feet. "And paying attention in biology class. If you did you would have known it also."

"Yeah, and you wouldn't have had the honor of saving me. Thank you, sis."

"Anytime brother. But you're welcome all the same."

And so, the herb in hand, bodies intact, we made our way home.

The End.
This is a work of fiction, and this gives me the ability to create whatever i feel works well with the story. On that note, the Oleifera Sabdarifa herb doesn't exist. Just as the Watery Lake is imaginary. But Bayelsa is a very real and beautiful place. And the bits about the alligator are also real.
Thank you for reading.

Wonderful! The beauty of fiction is that the author runs the show. The only rules that bind the author are, be convincing and hold the reader's attention. You meet both those standards here.

You've jumped from a plane, run out of a burning building and escaped the jaws of an alligator. Bravo!

Thank you for posting this story in the Ink Well community. Have you read and commented on the work of at least two other writers this week? (See The Ink Well community rules on our home page.) This helps our community thrive, and also makes you eligible to be chosen for a spotlight in our weekly highlights magazine. Thank you!

Thank you very much, I'm always happy when i drop posts here.

You are regularly stretching your creative muscles. I think you are wise to use the opportunity and the audience at Ink Well to grow your craft.

Thank you @agmoore.
You all are really helpful in my growth, and i will always appreciate.

As usual, you did such a great job with building suspense in this story, @bruno-kema. I had no idea alligators had poor eyesight. It was fun to learn about that. And I have a new skill in case I ever need it too!

I love the fact that you made up the name of an herb. It sounded very authentic.

Thank you very much @jayna, i'm glad for the lesson😁
And i'm doubly glad you enjoyed the story. Well, i read your afternote and was surprised! This story read so fluently and the imagery was so vivid that it felt real! I was reading the words as if the alligator was going after me... this was a great read and very enjoyable, thank you!

Hello @saronaspecial, good a thing you didn't drop your phone and run for your life 😁
Thank you for your kind words, i'm really glad you enjoyed the story.