We're in the 27th season of Rabona game still in its Beta stage and it's been a fun and rewarding journey thus far. Until I joined Hive, earning real money from games was never a reality. Today, I do a lot of that with Rabona game. I'm even wondering if my RBN earnings is what would make me hit 1 million HIVE milestone earlier than supposed. That would really be a fair deal and super outcome from a game that is barely 7 months old on the Hive blockchain.

The creativity of @rondras and @oliverschmid is alreadyplaying out big and the future can only hold something bigger. With 489 registered users/clubs already enrolled, Rabona would prove to be a living, breathing game world of soccer that won't just leave the momeories of the fun but would make many to become Hive millionaires in the coming weeks.

Putting to bare my leadership and financial management skills in coaching and raising my football club (FC Creativians) from the scratch to this profitable level has been no mean ride. Reaching the 10th level for stadium and cafeteria and 7th level for shop and many more income generating ventures has been a product of dedication and consistency. 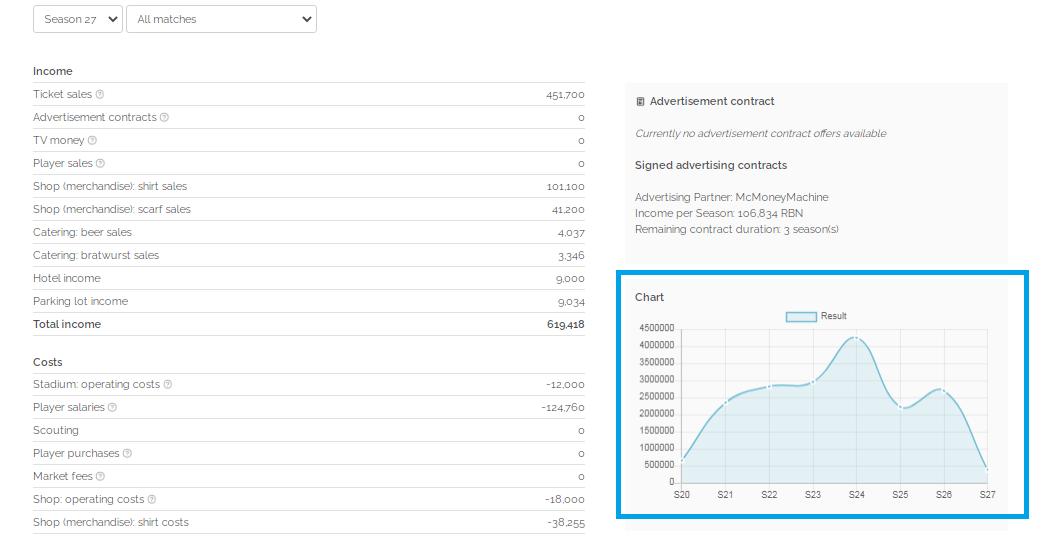 As we begin this 27th Season, my team earned over 9,000 viewers in the first home match and that is projecting a net earning of 10 million RBN to the team at the end of the season that would lapse for 1 week. I'm hopeful that the financial chart of my team at the end of this season would mark a peak point.

With this trend, making $50 on weekly basis could become possible courtesy of RBN earnings. This would happen once Bank of Rabona comes onboard to give true value to the RBN tokens.

10 million RBN for $50 would be a decent earning on a weekly basis from Rabona. This can only happen on Hive blockchain with just a few minutes of setting formations and training for each day's match and coming back to see see your team perform amazingly.

The future is here already and earning from leisure is the new normal. let's keep the fun going and the testimonials coming. $50 weekly would mean $200 monthly and that's enough to pay tuition fees for one session for a university undergraduate. With Rabona earnings, we'll be having more users coming to Hive just to catch the fun with games and get their bills paid.

Looking forward to buying up some more RBN tokens and hoping that it would make a cross-chain utility as with CUB.

Im very curious with Rabona and due to my curiosity I login my hive account and transferred the required funds. But I have no idea what to do. Need to read a lot. Im just a total newbie.

We hope the dreams come into reality with Rabona! It's baby 👶 step and I know with time it's going to go big 🏆

Damn ! I have been stucked in League 2 for a dozen of seasons.

How did you manage to move up and still keep a kind of balanced budget ?

Good job in any case