uyobong in LeoFinance • 10 months ago 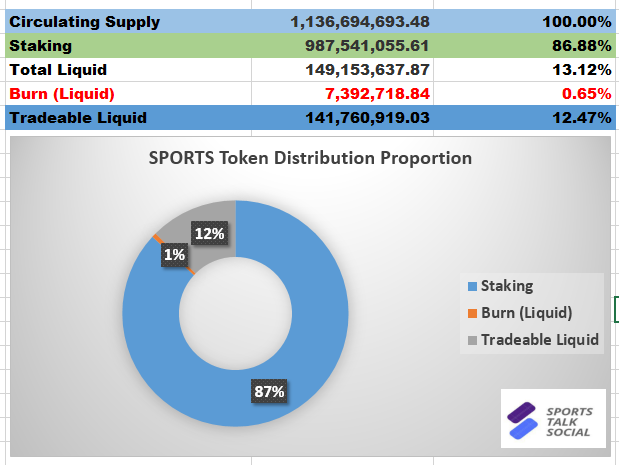 Sometimes, figures and charts are easier ways of communicating community growth statistics. I decided to fetch the SPORTS token distribution on Sportstalksocial and developed a simple pie chart to ease the understanding. As shown above, there are about 1.136 billion SPORTS token in circulation and out of this total, 86.88%, representing 987 million SPORTS are staked. This amount is excluding the reserved tokens by the team for promotion, development and other usage which is not captured in the market cap of the token.

Interestingly, the top 10 individual stakeholders of SPORTS hold over 300 million and the remaining stake of about 680 million is shared by 7,735 Hive accounts. The number of SPORTS stakeholders as captured in the SPORTS richlist is far less than the 22k active accounts on Hive blockchain according to @Arcange's daily statistics. If we dig through the numbers further, the average amount of SPORTS stake held by each of the 7745 stakeholders is only 127,506.9 tokens which is presently valued at $1.72. This further tells that at present, there is not even enough SPORTS tokens for all stakeholders assuming each held at least $2 worth of SPORTS (150,000 tokens) each, as that would require as much as 1.16 billion tokens.

We are still in the formative years of Hive and most actions are dedicated to building dapps and drawing test users. In the next couple of months when the there more stabilized activities on the chain, there will be the growing need for growing stakes.

Looking around and seeing the great growth around the LEO token, we can see that thee is a huge future for Hive-tokens. All that is needed is an head-up in mmarketing strategy and hopefully the DeFi feature comes to Hive-engine as Aggroed mused.

Looking at the entire active users of Hive, let's take a lower limit of 15k and every user desiring to hodl a few hundreds of thousands of SPORTS token, then, we'll be begging for a token at $0.1. There are presently only 149 million SPORTS token in circulation and out of that, over 7 million are already sent to @null, leaving behind 141.7 million tokens in wallets and exchanges. A handful of 5 investors who want to rank on top of the richlist can comfortable pick up 50 million tokens each and there won't be any left in the exchange.

Can SPORTS be possibly worth 1 HIVE each?

I would say in the affirmative on the above question following the narrative in the previous paragraph. There are no investors yet holding SPORTS, just passionate curators/content creators like myself. Holding 50 million tokens would require just 50k HIVE and that's way cheaply $7,250 in this ear season. Things are already looking bullish and it's time for @Patrickulrich and team to do something. The football seasons are starting and many sports enthusiasts are already camping around viewing stations like in Nigeria to watch each match for NGN 50 (1 HIVE that is, 10,000 SPORTS presently). A lot of them are great analysts and would be glad to make some income from their passion. It's time to seek for partnership with relevant organisations as well as building marketing incentives for those who'll be able attract new users right here.

Marketing Hive is never an easy thing to do especially when we look at the complications with key management and other technical stuffs that are not found in centralized socialmedia. This has been a bottleneck top adoption of users since. The future of SPORTS is already great, only a little action is needed to set things on the move.

You may join my SPORTS Curation Trail to maximize your SPORTS stake. With the trail, your stake of SPORTS would yield profits without your active involvement.

yeah, there a long road to go and as people get interested in crypto there gonna now the importance of hive token I also only hold around 181557 2$ worth of sports I know that not a lot but these I own some.

Now is just the est time to buy in. When huge investors join, the token would become way too costly.

yup so im turning all my hive earning into sports or chary and hivelist tokens
hey bro do you know where I can get some for free or buy doing tasks?

In answering the question of whether 1 SPORTS will equal 1 HIVE, it is possible but it could take a long time looking at the large circulating supply. Also, to even get close to achieving that, the Sportstalksocial team would have to do a lot of work in terms of collaboration, promotion and creating use cases for the token.

This makes this assertion of yours quite logical and useful.

It's time to seek for partnership with relevant organisations as well as building marketing incentives for those who'll be able attract new users right here.

Yeah, we're looking at a long term. 2 to 5 years isn't bad. However, if strategic marketing is engaged at this point, there will be a drastic change.

Strategic marketing is the word! This is what SPORTS token needs. The audience and target market is already known and they're numerous. It is a matter of knowing how to capture their interest.

Someone is buying and I think looking at the rich list we know who that is now. They can see what we have been thinking all along. We need to come up with ways in order to promote sports getting new users from outside Hive joining the community. Going to take time and @patrickulrich will need help.

Yeah, he is doing a great buy, the account even topped mine. That's good everyone. If we have 5 of such investments then we see SPORTS in the range of 0.001 HIVE per token.

Game use cases help tokens.
Maybe they should try and team up with Rabona and their Football Club Manager game

One idea I just had as I was reading is that you could combine with that new football game on HIVE (Ramona or Rabola?) and people can wage bets on the results of games? Not just football but you could create a dapp if possible where a prize fund is generated by people who want to enter and submit results, winners get 70% of the prize and the rest is burned? Dunno, just a though and throwing ideas out there 😊

Hi friend this is quite an interesting point you just made. Instead of Rabona having it own native coin, SPORTS token should be one of the tokens used to run the dapp.

It is RABONA sir and it is the most recent game on hive..

Ah I was close with the name 😁

Yeah maybe Rabona can use the SPORTS Token somehow, just an idea. You can have a use case for gaming and content too then with the token. It seems that the goals of both projects about tokenising sports related content and football gaming is something that can be worked on with one token rather than having all different ones?

Well i strongly agree to what @tomlee is saying on this matter of 1 SPORTS getting to 1 HIVE. If a major club in England would adopt cryptocurrency as one of their payment models for players, then that would be very possible for 1 SPORTS token to equal 1 HIVE and sincerely with the circulation of the SPORTS token it is possible to have that possible.

Also i think that if kunami should add incentives to football enthusiasts who plays play station, i think in a way, i would increase the circulation of SPORTS and also increase it value considering the number of people playing play station game.

Looking at England is way far. Look around your community and spread the word to local sports teams in your environment and even to schools.

That sounds interesting and really close...