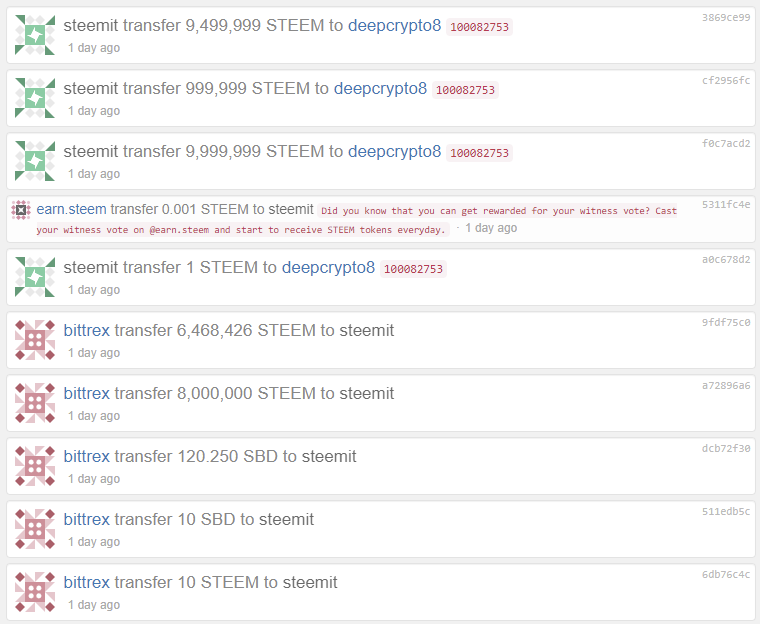 Around $7M USD was stolen in a rogue hard fork shortly after we forked to Hive. Some of these accounts were in active for over 2 years and had millions stolen from them.

While there is still a lot of tokens claimed in the lawsuit that are still in custody, this represents a lot of users who had significant amount of tokens stolen directly from their wallet with a rogue hard fork written by users who felt they should have received the Hive hard fork and put into action by Justin Sun and his stake.

As a top 20 witness, I had over 25,000 witness votes from the community. My position was replaced by a sock puppet witness with 5-6 votes. This happened to all the top 20 witnesses which allowed this theft to occur.

Justin Sun convinced these exchanges to stake customers funds without their consent to faciliate the hostile take over of Steem which without this, a theft like this would never have been possible. 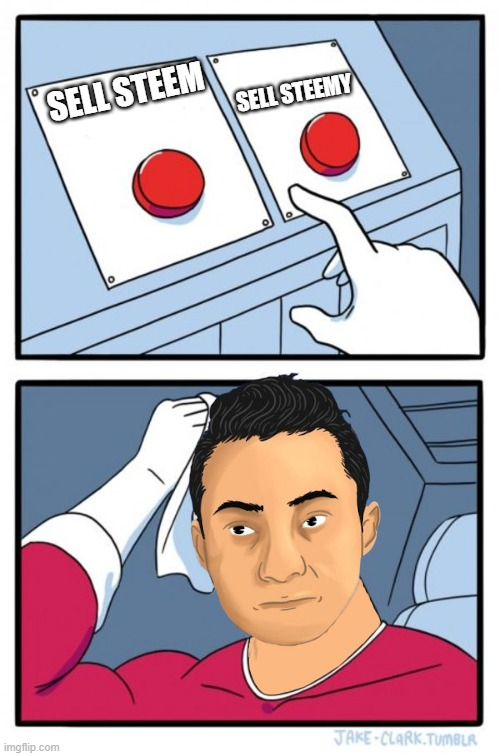 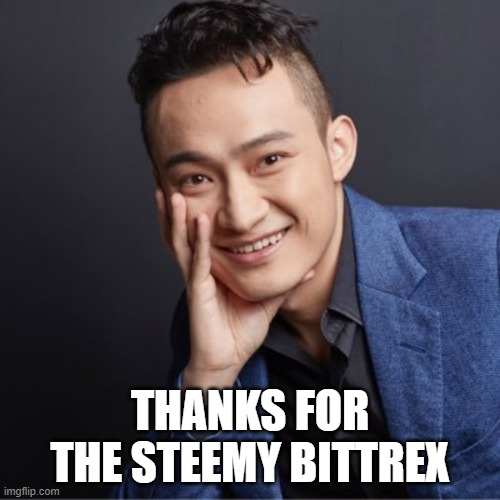 This will be remembered as a dark day in crypto history. If karma exists, Justin Sun is in big trouble.

just has to pass a few bucks to the judge.. all it would take.

Just look at his face.

Did you expect any different?

Does anyone else find it highly amusing that they chose to use binance? Now Bittrex doesn't get their cut of the sale fees! 🤣

OYEAH! I totally forgot about that!

someone should make toilet paper with those faces...

Looks like they didn't really sell any of them, yet.

Let's be honest, probably more secure storing them on Binance than on-chain.
Gah Steem is such a joke.
Wen next hardfork?

Never, there is no need now.

Disagree. Should HF that STEEM every weekend with new memechains. Maybe HF STEEM again just to troll BLURT. BLURTIER, BLURTER and BLURTERERR. Better still, HF Steem as an NFT. Just publish the code as an NFT with no-op changes to the blockchain. Just aesthetic changes to the source code.

Did you just have a stroke?

You have the wrong address. No one is stroking anyone. You want the gentleman's club next door. 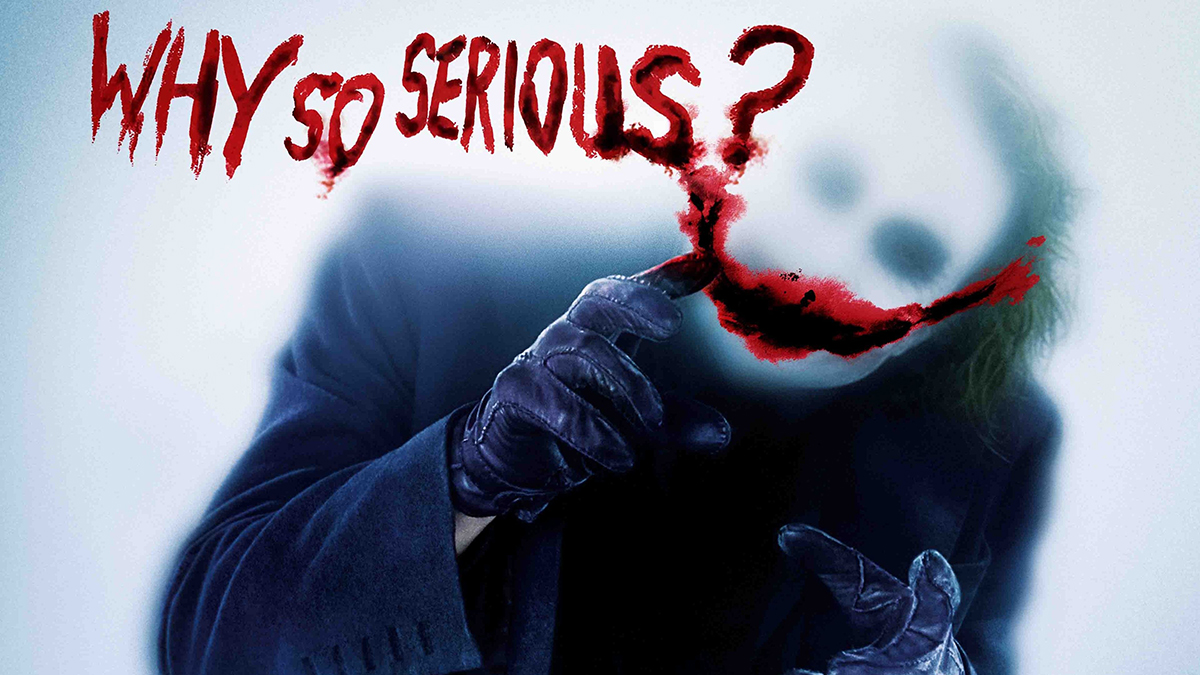 oh I know you are a joke

I saw these ones reported by whale alert on twitter the other day, but didn't really knew what's with them. Steem was a lesson, a kick in the ass that pushed us this far. Somehow we should thank Sun for making us rethink the so called decentralization we had on Steemit with the ninja mined stake.

I thought only Binance did a stupid move. But now this proves that Bittrex is even worse than Binance and other Sun-controlled exchanges. That's really bad.

so sorry for the people that lost their money... the only good thing I see from this is that it decentralized Hive even more...

So does this means the court case has a final decision?

Talk about a lowlife and I feel for all of you that lost your investment. This is theft and it is that simple. I am so happy we all moved away and this is a reminder of what we left behind.

Wow, didn't know anything about this... What a shame, now i do understand a lot better why all hivers dislike a lot Steemit and this guy Justin Sun... no wonder why :/

I'll never forget those days, us all thinking it would be okay til suddenly the worst were realised. Even worse for those who lost money.

Down with that sort of thing.

I know is not important but... the fact they sent 1 Steem to see if the memo and address of binance were correct LMAO.

Sucks big time but i wonder why this big accounts didn't join the suit? did they even reach out to others to talk about it?

Freedom account was mentioned which is controlled by a very privacy oriented person. If they had joined the lawsuit that would mean exposing their identity which I could never see them doing lol. That's most likely one of the reasons why someone involved wouldn't have joined the lawsuit.

To not expose their identity, even for a (chance at a) million dollars!

We'll never forget what he did. From what I've seen St--m is a dying platform. Sun will just take out what he can get.

For what it’s worth, something very beautiful and promising grew out of this! It is a complete robbery, that’s for sure, but there’s no other way than to look forward and focus on Hive.
Steemit is a sinking shop, glad I left it!

What would it be like if all the dev on Hive was done on Steem,m. And then the SunShit happened. That would be even messier. I hope the guy feels really upset that Hove is thriving!

There are real users on steemy?

There might be a clickfarm with real humans somewhere in the world. All payed in Steem. The poor buggers…

Yes and they are milking it to death.

can't imagine its worth :D

inane. 1 week powerdown is IMO a huge risk for steemy.

It can be tomorrow worth ZERO :D

Who the fuck is buying that SBD :D The Koreans can't be that dumb :D

And what does the buyer do with it? :D

Sell to the next? :P

How long can you milk a dead cow?

Seems quite a while

What happened to the funds of users like @darthknight?

I am not sure who all claimed. That might have been claimed or might be part of this.

Well, I remember a bit of the thing about his funds when we forked so I hope he recovered them.

I hope that guy is burned forever, Justin Sun is an enemy of the people.

That is incredible. When I read about it I basically fell from my chair (including the report about the court case).

I believe that we, as a community, should react and possibly all run away from Bittrex. Note that this is done for me (just to stress that I not only talk).

The HBD-BTC pair was precisely why I kept this account. However, as you said the volume is so low that it is not very useful at the end of the day.

I didn't understand the BITTREX part well at the time. Now I understand it better

We are better off where we are now.

I wonder what 2 years (to date) of interest payments on this money is. Certainly 20% APR could be added As of the recent increase in holding HBD. Those types of numbers really start to mount up over time. The usd value of that 7M doubles over 4 years with those types of APR’s. Lawyers can make good cash from successfully chasing that type of money

There is a stipulation in the lawsuit of value + $350K per party. As well as some stipulation against price manipulation, I don't know the details 100%, I just know there is something to that regard.

Thanks for the update marky. I know the funds have nothing to do with the mass public, but it has in a way as the whole community was so involved in this whole thing when it happened. Shitsun stole from everybody

Crypto has no owners.

It's a continuous rape affair between folks who claim to be "investors" ... and overlords who make investors part with their monies.

You log into hive everyday?
Guess what... you're the stooge "investor"

I understand why the SP of my account disappeared, I had about 1000 STEEM and I never saw them again, I thought it was a mistake.

But it doesn't matter, I hope that money doesn't even reach them when they are dying with cancer in a hospital.

When the switch was possible, a friend told me you should stay with steem since the pseudo-value was higher.
Personally everyone I know and follow are all on Hive. It was the easiest move for me.
It was one way decision.

Hey @themarkymark, here is a little bit of BEER from @pouchon for you. Enjoy it!

I sold all my steem right after the fork and bought Hive. Never looked back.

Ideally they should have burnt those instead of sending them to Steemit, seems Bittrex has developed some relationship with JS :) Its unfortunate to see Binance and Bittrex supporting the wrong guy.

Is anyone who was around and remembers that shit show surprised at this? Lol I’m not!

It's hard when you lose something! But I hope that everyone who has lost something will find a way out and there will definitely be success! Everything is in our (your) hands. This is something that depends on us.
But now I have other values, losing money is bad, but I realized that it was not so bad when the war came! Yes, money would now help many people here in Ukraine. Many are in dire need of help because they have become unemployed because of the war.
But for us now the main thing is to survive, and money is a thing to come. We pray and believe that our country Ukraine will win and we will expel the invaders from our territory 🙏🏼
Steemit will remain in my heart, since we all started with Steemit, but I am glad that there is HIVE, here I can share my thoughts with you, keep a military diary, just open my feelings and cry without embarrassing anyone!
I am very grateful to everyone who writes me kind words of support here in hive! You help me deal with my emotions. After all, what is now so necessary to raise strength and spirit is support!
I wish you all the best! Best wishes from Ukraine!
💙💛

I wonder how many of the "unclaimed" tokens are from people who lost their keys, and one day they'll find them and discover what happened when they log in and find their wallets are empty. I know a few people who were active on the old chain and then life happened and when I talk to them now they're like "egads I don't even know where my keys are anymore, one day I'll find them."

It was sold on Binance, but it was sent from Bittrex to steemit directly.

ok. thanks. I see that now.

Was that random, or by court order?
Seems like they would have restored the steem to the accounts in question and not required the kyc rather than gift them to the thief.

Do you know the legal citation so I can follow along online?

Thank you, very much.