There was a big step forward by the team @threespeak. We all know the #SpkNetwork is in the works. In the meantime, a major change was made with the assistance of @brianoflondon.

@podping is a project that he, along with some others, are using to radically the world of podcasting, specifically indexing of shows. This has the ability to save podcasting applications a great deal of money when trying to update the new podcasts.

In an article posted, 3Speak is now Podping'ing.

Each Has A RSS Feed

Essentially what it looks like took place is that each person who uploads a video has that channel turned into a RSS Feed. This is automatic with nothing required on the content creators part. 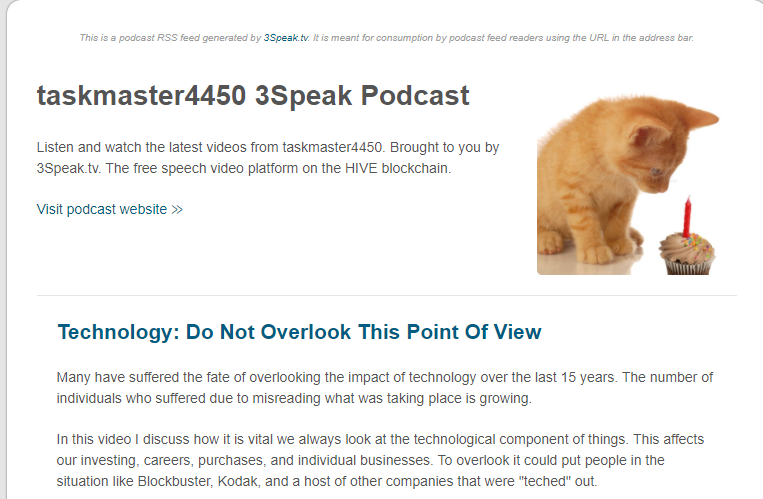 The first link on the feed takes one back to the channel's main 3Speak page.

Then we have the RSS additions directing people to the individual page of the video.

According to the article, we are now seeing the ability for 3Speak videos to show up on many different applications and websites. Again, this is done automatically, providing further reach. We can see how this could enhance the potential, not only for the entire platform, but also each individual.

This is a screenshot from a site called Curiocaster.com.

You can play around with both of these sites to find your videos. Just enter your username in the url in the first one and the search bar for the second.

In my mind, this is an important addition to the 3Speak platform. Being able to offer this service, as a standard part of the website, is a major step forward.

Content creators are always looking for exposure. Being seen is one of the most challenging problems online. While this does not provide any magic wand, it is a step forward in spreading out the links.

The Internet is run by applications. Anything that operates standalone tends not to be found. Unless someone has a large following, he or she will drift off into the abyss.

Most people find things via applications. It is a way for individual's to simplify things. YouTube is a prime example. Instead of looking through dozens of video sites for content, people just head there, do a search, and watch what they want.

It seems podcasting is a similar situation. Most turn to a platform like Spotify or Apple. Since we know applications like this are vital, it is best to do all we can to get listed on them. Now it appears there is the opportunity that is going to expand the reach of every 3Speak video as a podcast.

This is something that most video hosting platform can offer. Also, since it is now available for 3Speak, we are likely to see it available on any other application built on there.

There are a few glitches as detailed by the article posted. Hence, we will have to be patient for a few of the features.

The question is what comes next? @brianoflondon stated that a follow up article will be put together providing more in depth coverage into what is taking place.

We are looking at a continual evolution of different aspects of the ecosystem. Without being an expert in the podcasting world, it is hard to look into problem areas. Fortunately, it appears those who are involved in Podping are versed in this industry and where the friction resides.

Will all of this lead to a decentralization of the podcasting world? It is a major step forward to get 3Speak videos on the major podcasting applications. However, this does nothing (that I can see) to reduce their stranglehold on the industry.

Like anything, it is an evolutionary process. As other applications are built upon the SpkNetwork as it unfolds, do we see more decentralized applications that are hosted by the communities providing this service?

The key to any new technology is moving beyond the first stage reference point. What that means is innovating as opposed to just copying what already exists. We might be starting to see that on Hive.

What still make the make this community a sucessful is the commitment of some certain people toward research and development of the ecosystem and that is exactly what is going on here in 3speak.

Without a doubt. We are seeing a great deal more happening on Hive. It is terrific to see Brain tie into @threespeak.

We just need to keep seeing more of this stuff evolving.

How does this tie into Aureal.one which is focused on decentralized podcasting here on Hive? How can we leverage the best of both apps aka force synergies? As of today Aureal.one is pulling all the episodes from the RSS we own on say Wordpress (using a podcast host) for example. 3Speak seems to generate its own feed based on the videos uploaded. I'm curios to know whether audio podcasts will be treated differently. Shout-out to @blockanarchist1 (team Aureal.one) maybe he can provide some additional insights.
Thanks for raising awareness on this new feature!

Hey @kriszrokk, Apologies for the delay.

Please refer the following thread to get better insights. We're working on making your experience easier and Speak network is going to be one of the collaborators to make that happen.

Submit
0.00 PAL
Reply
[-]
poshtoken  13 days ago (edited)
The rewards earned on this comment will go directly to the person sharing the post on Twitter as long as they are registered with @poshtoken. Sign up at https://hiveposh.com.
100%
-100%

Well written post bro. I love the functionality of @threespeak and how further development could allow for a boom like lbry saw except a more sustainable one where there is more reach and engagement!

I have been following Podping since they needed a developer to help out and it is amazing how far they have come today, excited to see the impact of this project.

So with this, there should no reason why people shouldn't upload the videos into 3speak. It duo functions as a podcast for people who want to just listen.

Bret Weinstein's podcast got censored hard despite having some of the most credible people on-board.

One of the guests was the inventor of mRNA vaccine technology. Still the video is removed from YouTube. Bret Weinstein embraced https://odysee.com

If we could get some of these people onboard to #SpkNetwork it would be MASSIVE!