Paying the Rent with LEO & CUB

Okay, I know, if there ever was a click-bait title... So let me save you from the disappointment down the line, and tell you: My landlord doesn't take cryptos, and I would be surprised if they'd even heard of LEO and CUB. Just as expected, right? What's the big deal then? Why am I even writing this post? Initially I wanted to wait with this post until this months Geyser payout, so I could include that in my assessment. It's supposed to arrive around (make that AFTER) the first of each month, so it's kinda overdue. But hey, I can see the LeoFinance team has just brought out LeoBridge, and are about to launch Kingdoms, so I'm not complaining. (Though getting some Geyser would be great, wink-wink!) However, with so many changes happening, I really felt like taking a minute to look back... and a little bit forward.

When WLEO first came out, I entered the liquidity pool with two ETH, and the corresponding amount of WLEOs. I didn't put that much in right away, but over the course of the first month I was lucky to be paid for a job in ETH, so I thought I may as well get paid for having it! It started rather slowly, but each month I got a bigger and bigger Geyser payout: around $20 at first, more than $50 next month, then just under $100, and finally $150 on April 5th. At this rate the next payout should be... well, I'd say at least that much, since I am still one of the OG pool members, for whatever it's worth. As psyched as I was about earning LEOs for providing liquidity, doing the same with CUB exceeded my expectations. And that was even before I really put some money into it. At first I only used the CUB I received in the airdrop, gradually adding more bLEO with each Geyser payout. As I went along farming in the three most rewarded pools (bLEO/WBNB ; CUB/BUSD ; CUB/WBNB), I kept using my earned CUBs to increase my holdings in each. Only a few weeks ago did I double my funds in CubFinance, by selling some LTC, which ended up in my BTCB den. Since then I've been earning around two CUBs a day. 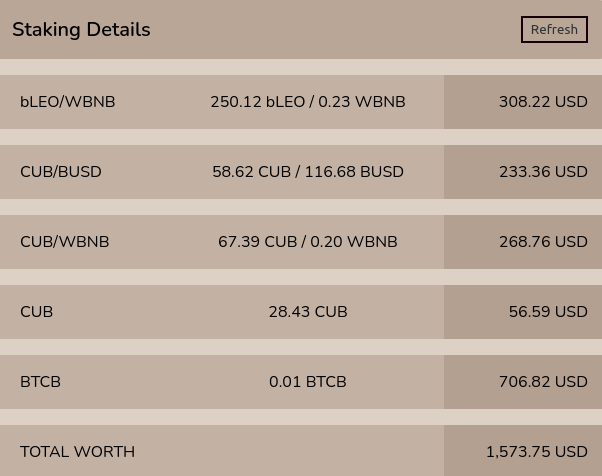 Am I Earning a Lot? How Long is a Piece of String?

Now, let's see about these calculations, which ultimately got me thinking about my rent. Two CUBs a day, or 60 CUBs a month are currently worth $120 USD. Not so long ago, when CUB was worth $3.50, the same calculation got me to $200 bucks a month. But in practice this calculation has little meaning, since it's not only the price of CUB that can change but also the APY (or now APR) for each farm or den, meaning the amount of CUB you earn. Still, even with CUB under two dollars, I'm looking at close to $300 USD that comes my way, pretty much for not doing anything (other than taking a risk). And that is just about the amount I have to fork over monthly for my Mexico City apartment. And even though they strictly take pesos, it feels pretty sweet knowing that I'm getting that much from my DeFi pools. In fact, I think even if they accepted LEO and CUB for my rent, I probably still would prefer giving them my fiat, leaving me with more cryptos to make more money with. If things are looking this well now, imagine how they could be looking in a few months! (Or not! I need to keep reminding myself, it's a risk that I'm taking here.)

Suspending my Optimism for a Minute

Maybe the most important wisdom in crypto and investment is never to invest more than you are willing to lose. Okay, but how much did I really invest in the first place? Looking back at the price of LTC and ETH back when I bought them in 2017, the overall fiat I paid for ALL of this was about $250 USD. All the rest came from LEO, which I got for the HIVE I earned blogging. Now my two pools are worth more than $11,000 together. Sweet, but how much would I actually lose if everything went down the drain right now?

I'm not even thinking about getting hacked, which still could happen, but let's hope it won't. However, the price of CUB could keep falling. Granted, with the new projects they are bringing out the LeoFinance team is working hard on the opposite effect. And I don't have a reason not to give them my support, especially since what they are building makes sense, and I expect these project to bear fruit. Still, there is no guarantee.

Finally, there is the issue of impermanent loss, something I've been warned about. Take my WLEO/ETH pool for example: My original 2.07 ETH have dwindled down to 1.27, losing more than $3,000, while the WLEO I gained in exchange is only worth $1,890. Had I just kept HODLing both coins, they would be worth about grand more. (Although in that case I wouldn't have had the Geyser payoff to pour into my CubFinance farms!) But the same impermanent loss can be seen there as well: It's always my BNB that seems to be getting less and less.

The Loss, the Gain, and the Way Out

Though I mentioned it here because there's a possibility for it, I don't really think that impermanent loss is going to drain me of my valuable coins, leaving me with a bunch of tokens that melt away in the midday sun. The other extreme possibility, of LEO and CUB taking off and mooning to be several dollars worth within a few weeks, though I think is also out there, I don't think is very likely. Instead, I believe the actual outcome is going to be somewhere between the two. In either case, however, it's essential to have an exit strategy. Instead of leaving my pools all at once, what I prefer doing is taking regularly small amounts out, starting with the payouts. So instead of reinvesting it into the pools for yet higher payouts, I would convert it into... ultimately things, such as a phone, or bike components, preferably bypassing transactions and currencies as best as possible. And for this the newly created LeoBridge seems to come in very handy. But let's see and find out, gotta learn using it for myself.

I've been building up some liquid HIVE lately to experiment with off-Hive DeFi. I want to try $500 into CUB, Bakery Swap, and Pancake Swap, and compare the results.

Good luck! I myself only have the DeFi experience explained above, but they say it's important to diversify.