Marijuana—also called weed, herb, pot, grass, bud, ganja, Mary Jane, and a vast number of other slang terms—is a greenish-gray mixture of the dried flowers of Cannabis sativa. Some people smoke marijuana in hand-rolled cigarettes called joints; in pipes, water pipes (sometimes called bongs), or in blunts (marijuana rolled in cigar wraps).1 Marijuana can also be used to brew tea and, particularly when it is sold or consumed for medicinal purposes, is frequently mixed into foods (edibles) such as brownies, cookies, or candies. Vaporizers are also increasingly used to consume marijuana. Stronger forms of marijuana include sinsemilla (from specially tended female plants) and concentrated resins containing high doses of marijuana’s active ingredients, including honeylike hash oil, waxy budder, and hard amberlike shatter. These resins are increasingly popular among those who use them both recreationally and medically. 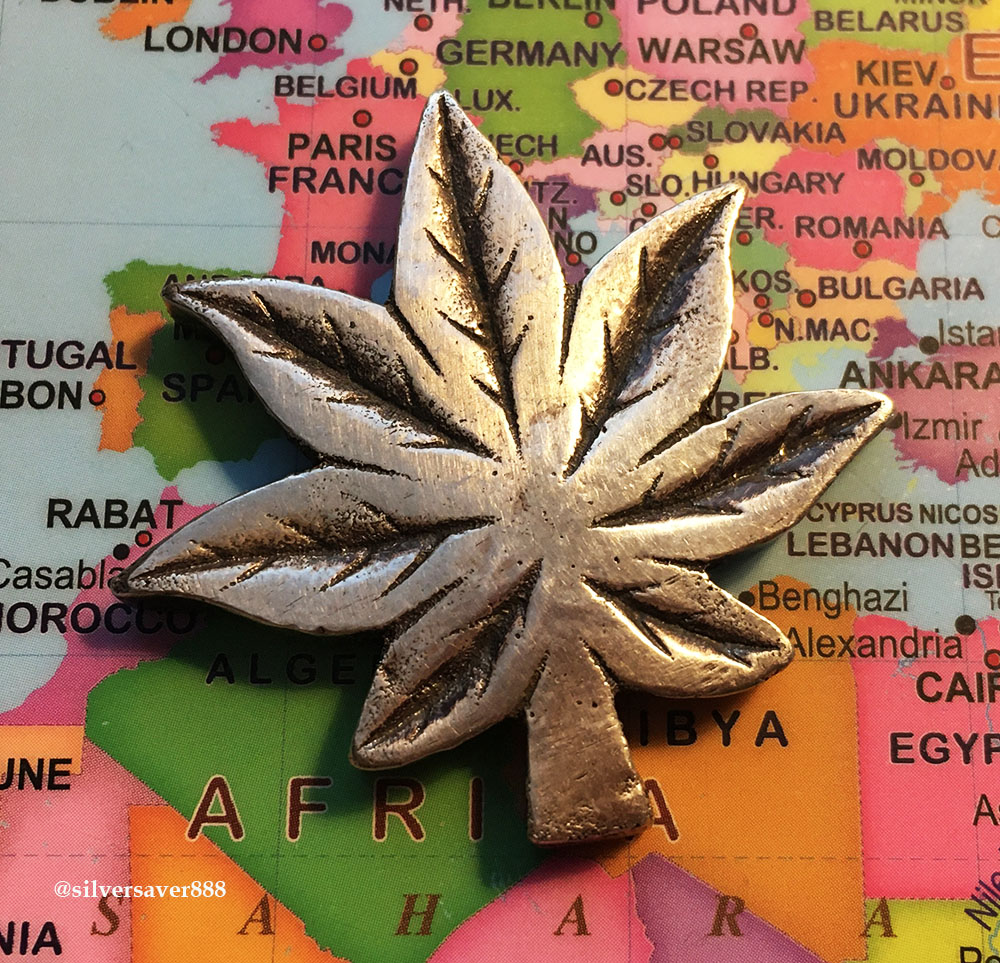 As of November 3, 2020, 35 U.S. states, the District of Columbia, Puerto Rico and Guam now legally allow marijuana for personal medical use. Rules surrounding the use of medical marijuana vary by state. 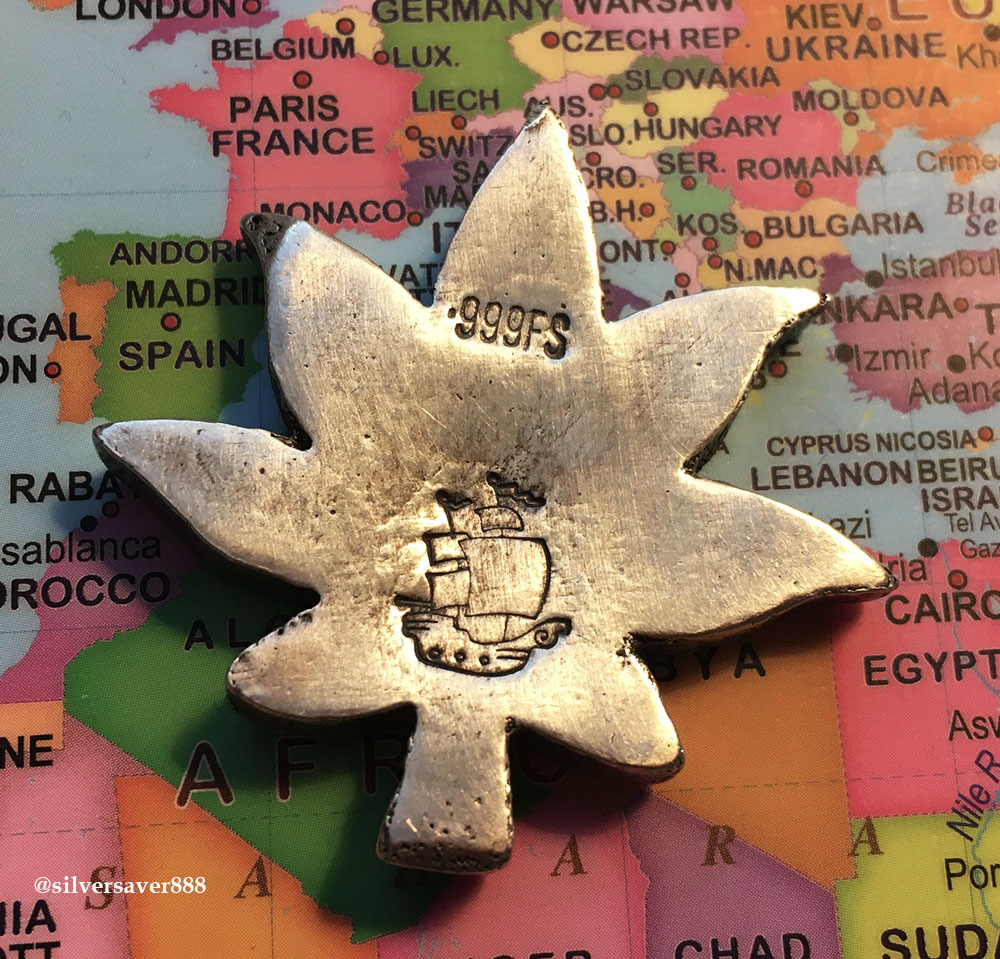 Marijuana has been used as a therapeutic and medicinal agent for centuries, dating back to the 27th century BC. Today, it is still used for medicinal purposes, although restrictive laws surrounding its use now exist. Medical marijuana is available in many different forms from dispensaries: as an oil, pill, vaporized liquid, nasal spray, and as the dried plant product. 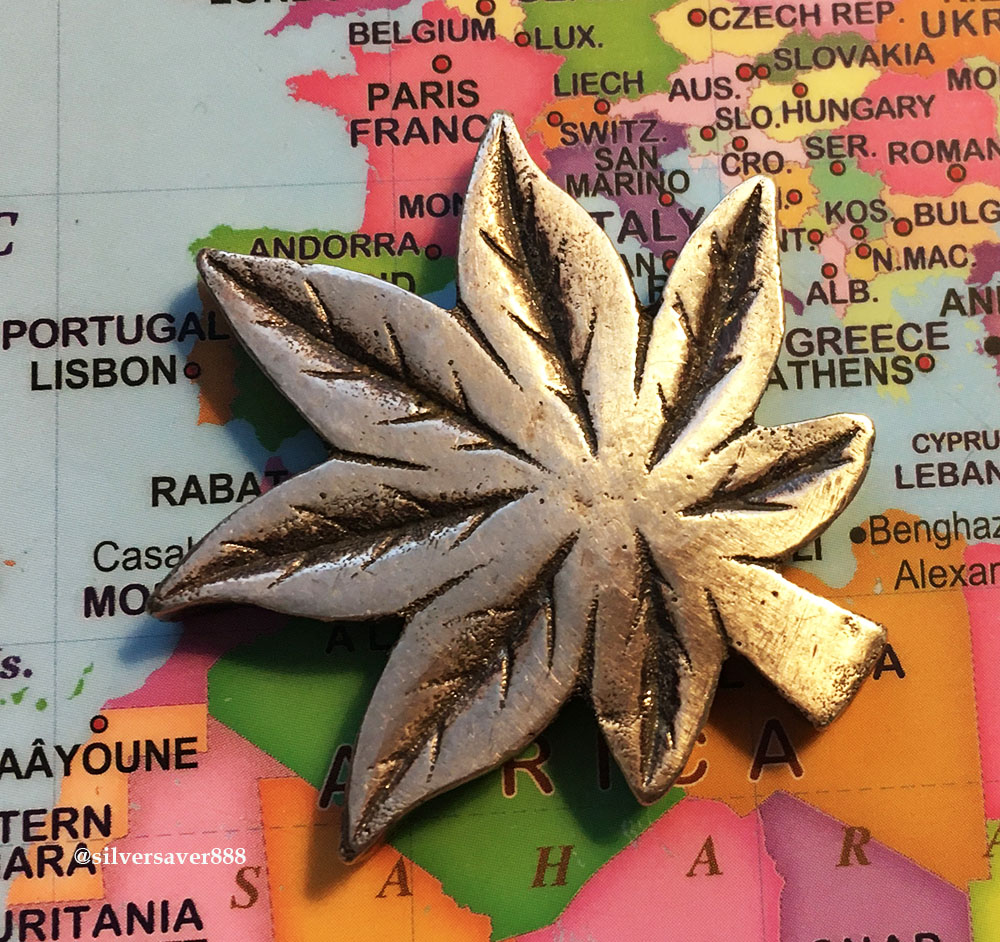 I started documenting my hand-poured silver bars late last year about 7 months ago.

Silver to enjoy, lovely style in pour should be popular @silversaver888 also interesting to read how each state differs in law.

It sure is popular!
Actually, this is my only piece of this kind.
I think this was gifted to me, I forget, hahaha!
Interesting, huh?!

Perhaps a good idea to build a mold and sell some....

Hahaha.. there you go!

Thank you very much for the tip, @joanstewart!

It beautiful I love it

Hello, @oscarpower55!
I am glad you like it!
I would like to know why! May I ask?

Beautiful it is ear, it can not be seeing everywhere

I just followed you!

Pfft, medical. We have rec in my state :). It is crazy how the business has boomed. Pretty much exactly like the last season of Weeds. We have shops on nearly every corner and so many grow buildings all over the place. Just down the road from where I work is a huge grow and processing plant.

Wow... marijuana for recreation!
How is that coming along?
Oh, the business has boomed... Huh?! I always wondered.
For sure, it took a change of mindset.

It seems to be going okay I guess. I have been meaning to write a post on it, but I just haven't gotten around to it. I don't buy the stuff, but I know people who do. The money pumping into communities for permits and stuff like that is nuts!

Ah... politics, perhaps, played a role in the approval for it be for recreation?

It was a proposal that the citizens voted for. You can have something like twelve plants too if you are into that sort of thing.

Hehehe... I am not into that sort of thing, LOL!

…and can be used as throwing-star during home invasion!
Great looking piece — of course I love it!

Hahaha!!!'
My only one piece!
CHEERS, @thedamus!

I can buy hash everywhere and it is legal to smoke but have never tried it. I prefer a good glass of sauvignon blanc or muscat to feel extra happy!

I !LUV it Pot Makes Everything Funny Ms. Saver @silversaver888 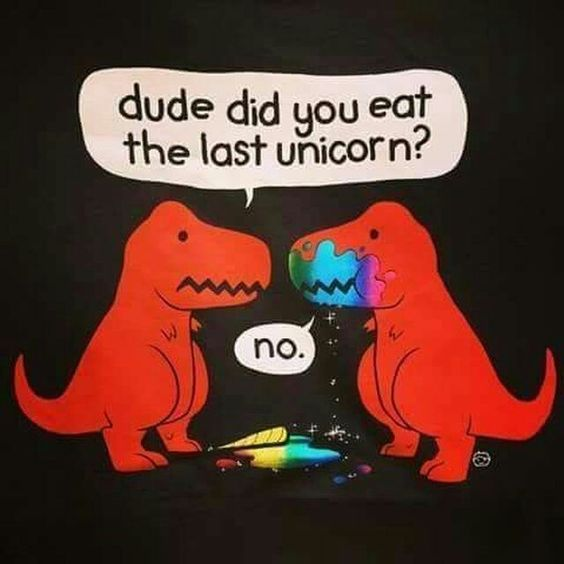 If you say so, @stokjockey!

Where is the LUV?

Twice in One Day !LUV

Magnificent! I really think the unique, one-of-a-kind pours, with identifying hallmarks, are going to be the next craze, if they are not all ready. Thanks for showing, @silversaver888.

It conjures different reactions from different people, @cve3!!!
Stack on, my friend!

you gotta love sand casting, not a fan of the herb myself and prefer the barley wheat and hops but i do love silver, looking forward to your next bar

Same here, @monsterjamgold!
Until the next one!

I love the hand-poured! This is a real gem! Of course, you need one of these, you are from California! I am impressed you have so many! It is really distinctive!

Do you have a favorite one out of all the ones that you have? That would definitely be hard!

A favorite.... hmmm... I haven't thought about it.
But I don't get them unless there s something that attracted me to it.
I suppose you can say that they are all my favorites, lol!
They are part of my perma-stack, and therefore will not be sold... until I become old and grey, and eventually konck out!
Now you are making me think! To whom do I leave this stuff?!!!!

A relative that you admire, love, care for?

Either that or make sure that you do something amazing with your stack. I won't get rid of mine unless I am rendered penniless.

Ah... you won't go penniless... far from it!
I have sorority sisters who have been the best of friends from freshman year... but not a single one appreciates silver. Silver jewelry to a certain extent, but hardcore silver I doubt it. Besides, I have them in my will for other stuff!
Relatives, no one has shown up, yet! I doubt if they are looking for me.
Oh, you make me wonder why I don't have relatives!

Wait! Dont you have a sister???

Oh, finally! Thank you to @stokjockey!!!

It's semi-grey-quasi legal so long as you buy the poor quality, much more expensive Corporate products okayed by the Canadian Government.
Grey area Illegal only if you have a different private, cheaper, delivered to your door, pesticide free, organic, better quality variety to compete against the lousy Corporate products enforced by the govt.

Always a string attached, but with love 🤗 🌺 💖

how are you dear friend @ silversaver888 good night
I really appreciate that you let us know this information and this beauty.
I take this opportunity to wish you a splendid night

Yes, this is one more hand-pour!
Have a great day, @jlufer!

I actually don't mind people taking it so long as they aren't bother other people. Also the criminalization of it probably isn't the best and it should be legalized so they can get taxes.

Smoke bothers people, and so do some behaviors.
So I don't know!
Lucky for me, I am surrounded by a select people at work, and I am seldom in public places where people randomly smokes.

Cool piece. I was thinking of making one different, but in the same theme. Haven't got around to it yet! Cheers

I never knew that you could brew a tea from marijuana so very interesting @silversaver888!😀
How much does this very unique silver pour weigh in ounces my friend? It looks like a good sized pour!😀

Hahaha, I put it away already!
Did I forget to put its weight?
Well, based on the photos, I bet is over 2 oz, @silvertop😀

A solid Silver pour @silversaver888 the larger ones are the nicest!!😇

Seeing all these poured pieces makes me want to pour my own. I should sell my black room set up and build a small forge and smelt some old .925 jewelry. Just what I need, another hobby. Marijuana has been a god sent for my cousin (at the end of her journey with cancer 😥). It has taken a lot of the pain away and helped her apatite. The cancer is eating away at her bones, so the pain is awful. Love the leaf! hehe.

Why not, @bdmillergallery!
You're an artist! I can just imagine the thing you can come up with!
Yes, thank God for its medicinal purposes. We had a friend who had a brain tumor. Towards the last days of his life, the pain was unbearable His wife was prescribe marijuana in drops, (so potent that thing!), and it helped a lot. It gave him the better quality of life towards the end of life,

Haha.. I will research it a little and see what's involved first. But it does intrigue me a little.

Are you on Discord? I had a few questions about SSG community and didn't want to drop them here in the comments. Also, is there a SSG Discord channel? How do I obtain an invite to that if there is?

Silver Saver#1507 is my discord name.
This is the invite link to ssg. If it doesn't work, I need your discord name. https://discord.gg/

Where are you from @killerpengu?