You know, they say that money cannot buy you happiness.

That's so true up to a certain level.

But understand, that being completely consumed by debt is a sure path to unhappiness.


Silver Stacking can be a gateway to numismatics. I buy a lot of modern bullion, but I also buy old coins.


Totem poles serve as important illustrations of family lineage and the cultural heritage of the Native peoples in the islands and coastal areas of North America's Pacific Northwest, especially British Columbia, Canada, and coastal areas of Washington and southeastern Alaska in the United States. 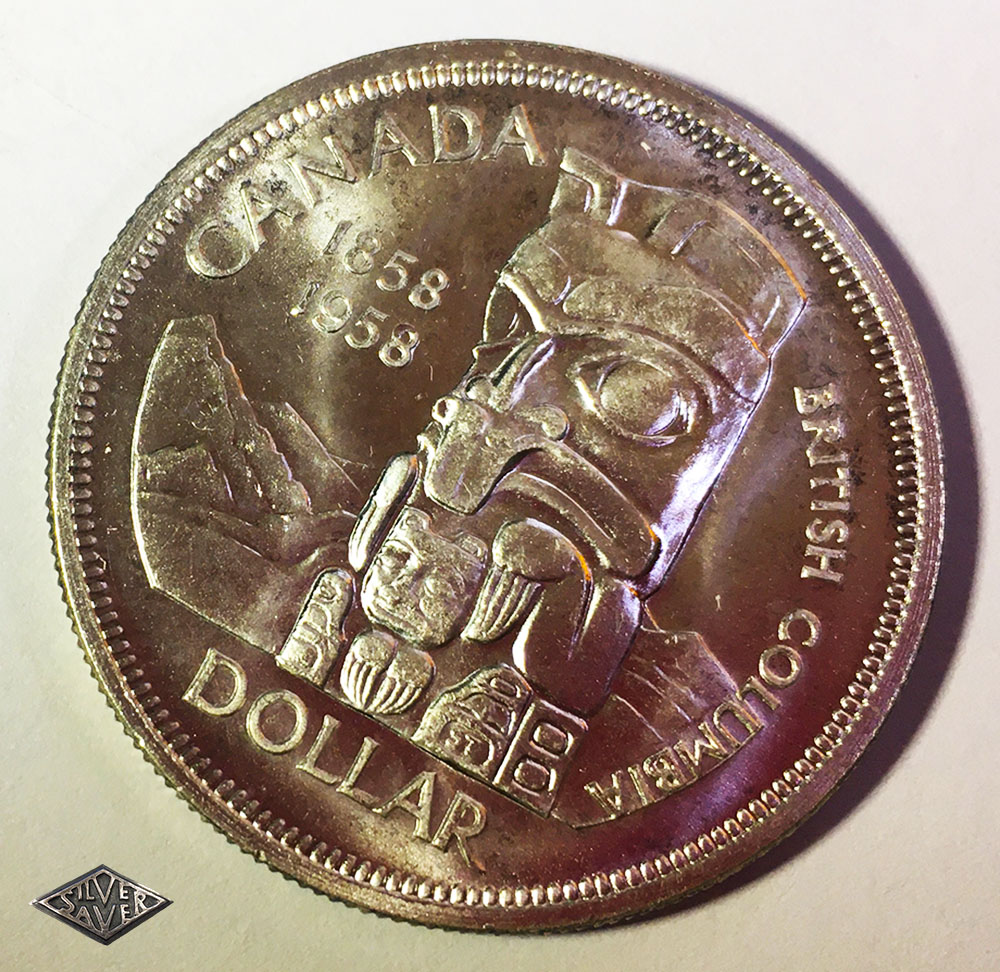 The obverse shows the portrait in right profile of Elizabeth II when she was 27 years old. The coin bear the lettering: ELIZABETH II DEI GRATIA REGINA M G. the translation is Elizabeth II Queen by the grace of God. The Engraver was Mary Gillick. The reverse shows the design of a Northwest Coast First Nations totem pole with mountains in the background. An apocryphal but widely circulated story holds that the top element in the pole is a Raven, used by some First Nations to symbolize death. As a result, it was rumored that those First Nations disliked the dollars, causing them to be called "DEATH DOLLARS." 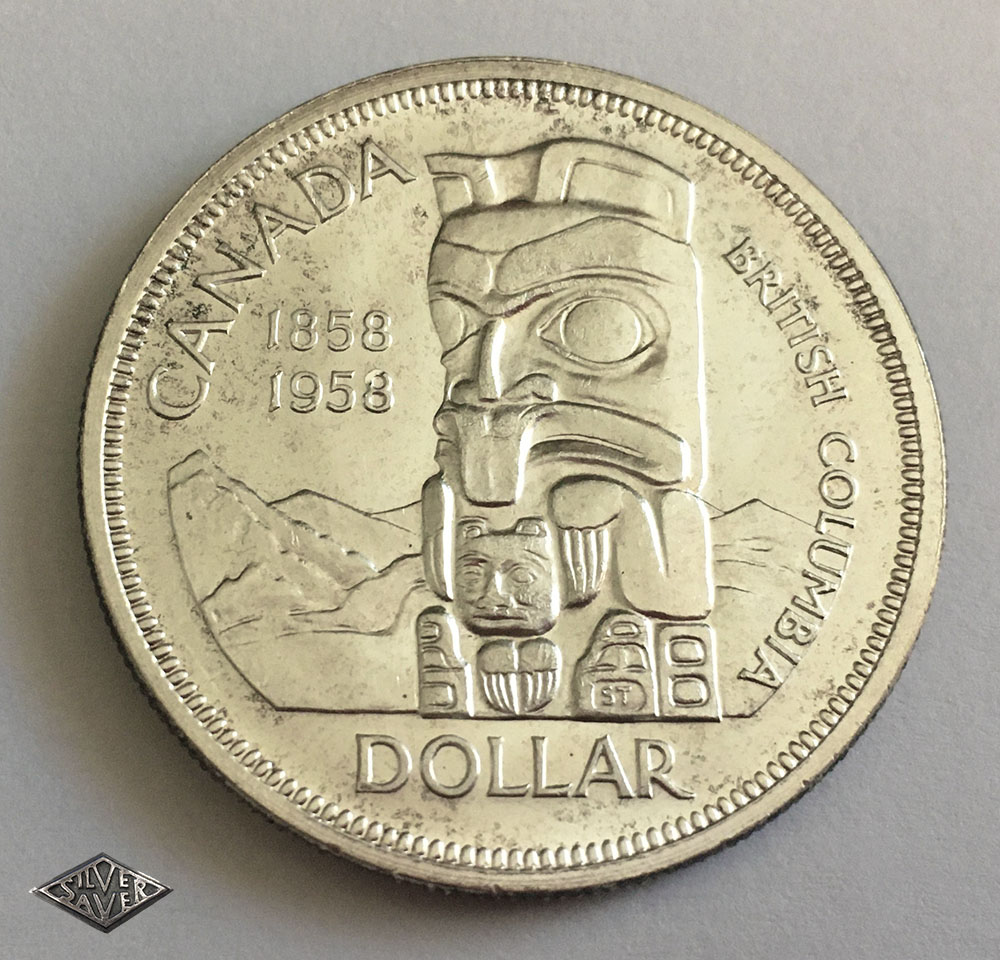 However, the figure with upright ears, a distinct nose, long claws, and what may be a tongue sticking out is not Raven, but more likely Bear, beneath her cub. This motif appears on many totem poles. Further, neither Bear nor Raven is associated with death; the former is a common clan-owned crest, the latter is a celebrated Trickster and Creator figure central to hundreds of stories of the peoples of the Northwest Coast. 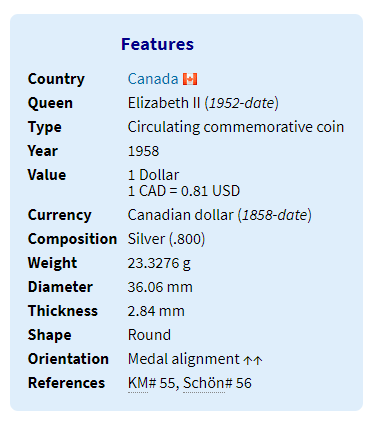 These are all Canadian Dollars. I shall be showing you these coins in the succeeding articles! 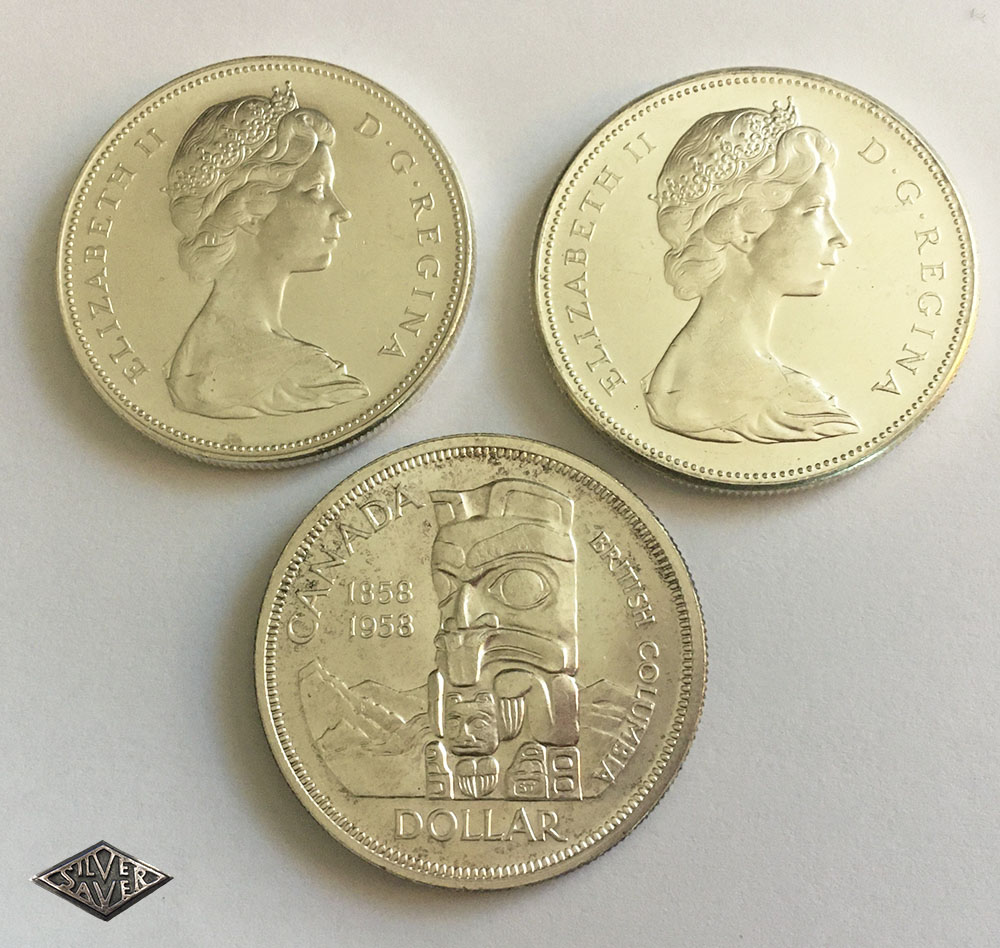 The Thunderbird may have been more appropriate a subject, like the famous tourist stop of the set of Totems featured in Stanley Park Vancouver.
The Engraver may have likely rejected the Thunderbird because he wanted a closeup of the main features. Whereas the spread wings would force the artist to portray the subject further back and thus diminish the features.
We don't want to cut off the wings do we? No, no, no.
That was saved for a Cupro-nickel coin sold at the souvenir shop.

Then there was a Reporter's interview with a few Aboriginals over a beer to talk about the coin, "Whoa, bird of death, ...they didn't talk to us about it."

This is my Number two coin after the 1949 The Matthew Canadian Dollar I like.

Always, with love and feathered friends 🤗 🌺 💖

Me too!
It's interesting the many stories around coins.
Canadian coins are rich culture and the designs are outstanding! 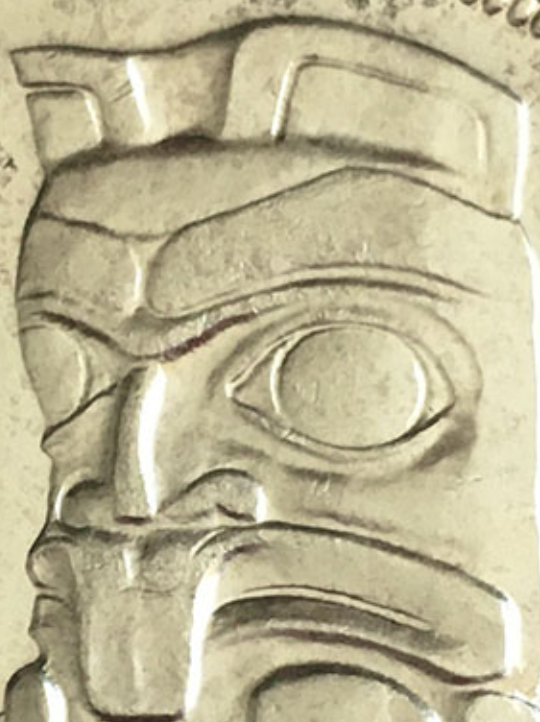 Oh, this is very helpful!
It is a quick and easy way to remember, in case your calculating whether the pricing is appropriate for a Canadian coin!
Hmmm... I wonder why you especially like the 1958s? Is it because it was the only year this kind of totem pole was done?
CHEER @thedamus!😎👍👍

Yay! Death dollars are excellent!! Not my #1, but very cool and I always like finding them. Cheers Saver!!

Thank you very much, @stokjockey!

A Chick and its Mother 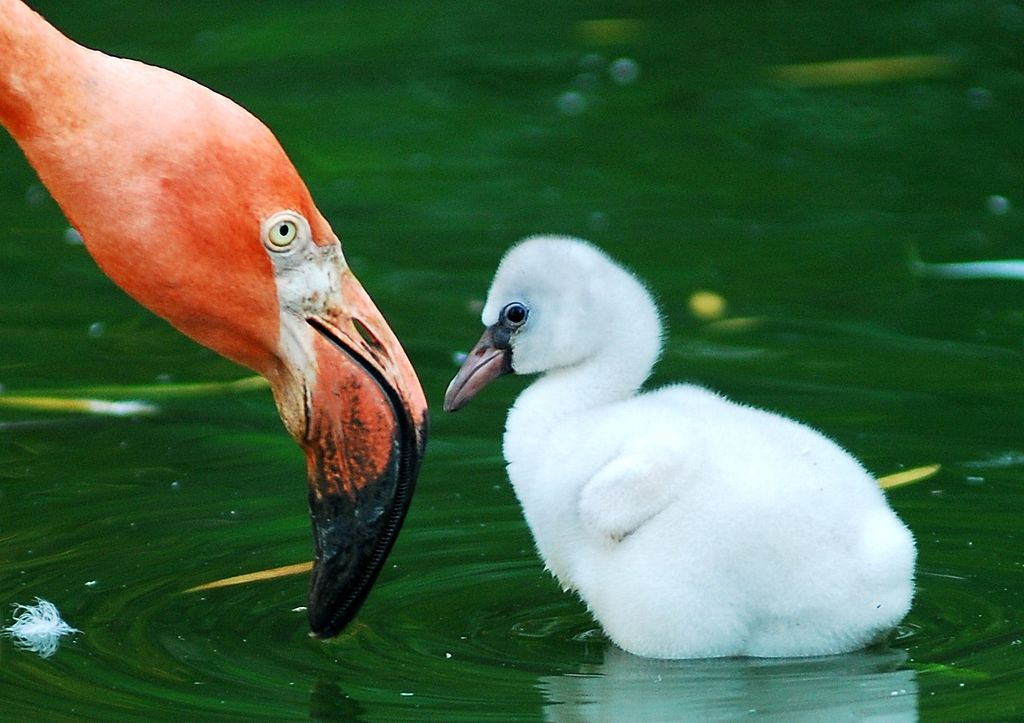 So neat and I get to learn all these things I never knew about coins. Thanks for the share! I like the totem pole. That's pretty cool 😎 I'll try to keep my eyes open and on the look out for one in our local shops.

Oh, how convenient! There is not a decent LCS near me... there are, several miles away!
These are circulating coins, but I acquired this BU, meaning Brilliant Uncirculated.
They pretty inexpensive, being 80%.
I love Canadian coins!
It's my lunchtime. I have not been through the other comments yet, lol!
And work is calling!🌺

I !LUV when the SPOT Price of Silver is Up Ms. Saver @silversaver888

Thanks for the beer, @pixresteemer!

Maybe the owner forgot when saving. I like that!
Now, please critique the photos, please, @anzirpasai.
I tried my best, but I guess I will have to get more lights!

Hi @silversaver888 . No need to add lights. it's just adjusting the light to be softer. avoid too bright light. if excessive light is used. so a shadow will arise.

I think I know what you are saying!
I'll try it, @anzirpasai! 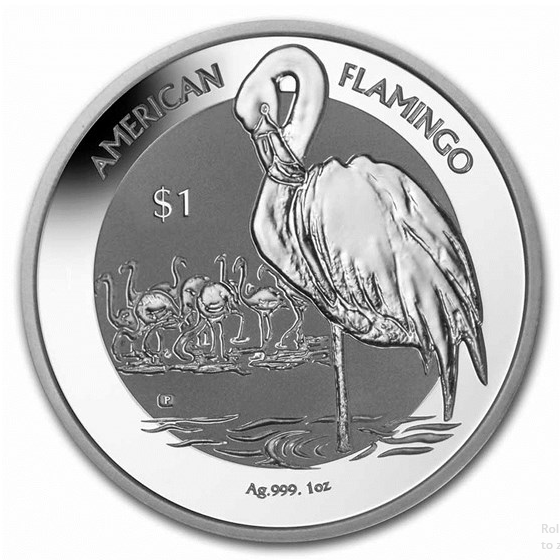 I see a Flamingo Blog Posting in Your Future Ms. Saver, am I Psychic ?? @silversaver888 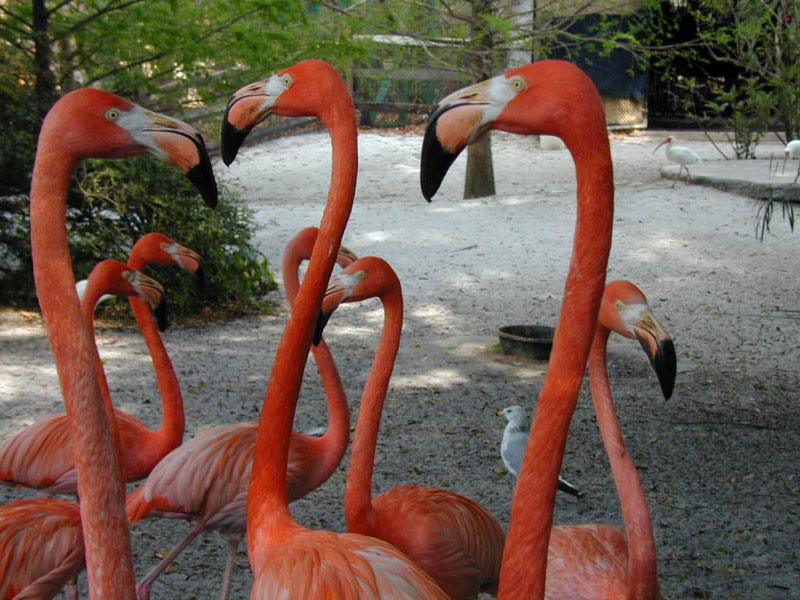 Adult American flamingos are smaller on average than greater flamingos, but are the largest flamingos in the Americas. They measure from 120 to 145 cm (47 to 57 in) tall. The males weigh an average of 2.8 kg (6.2 lb), while females average 2.2 kg (4.9 lb). Most of its plumage is pink, giving rise to its earlier name of rosy flamingo and differentiating adults from the much paler greater flamingo. The wing coverts are red, and the primary and secondary flight feathers are black. The bill is pink and white with an extensive black tip. The legs are entirely pink. The call is a goose-like honking.

I have flamingoes all over... Hehehe!
Put some words to it, @aksa!

gotta love the death dollar, i have 2 of these in my stack

I still don't understand what the totem represents. But I guess it works out.

It is to honor the Northwest Coast First Nations ...
Totem poles serve as important illustrations of family lineage and the cultural heritage of the Native peoples in the islands and coastal areas of North America's Pacific Northwest, especially British Columbia, Canada, and coastal areas of Washington and southeastern Alaska in the United States.

Ah ok. I might of missed that sentence lol.

You did not miss it, @jfang003.
I added that one after your comment, LOL!

That is a very popular saying dear friend @ silversaver888 but it is not so true, if you do not have your basic needs covered you are not happy and those things are bought with money, therefore, there are congratulations that are acquired with money

beautiful this piece that you let us know, I admire your collection
have a beautiful night

Have a wonderful evening, @jlufer!

Very cool! You always have the most interesting silver pieces sis, @silversaver888! I look forward to seeing the obverse sides of the remaining coins. Take care!🤗😘🌸💕

The old circulating silver coins of Canada have very nice designs and very meaningful.
I love them!!! Do you have them in your stack, seeing that you are just a stone's throw away?

So awesome @silversaver888, and show casing a Totem Pole with the Pacific Northwest Mountains behind!🤗
I feel home already!!!😀

If I remember right, you showed a Totem Pole in your blog?
I wish I could find it so that I can attach it here for reference, @silvertop 😀!

Ahhh...You are correct, I remember that post!! You have a very good memory @silversaver888, I believe that was about a year ago!😀