Potential Support Levels for the Price of Bitcoin

scaredycatguide in LeoFinance • 24 days ago

With the price of Bitcoin selling off lets take a look at the daily chart to identify pivot points and potential levels of support.

Potential Levels on the Daily

Looking at the chart above you can see three horizontal lines drawn. The upper most represented the last big pivot point around 51,200 which price has pushed back down through, thus that level did not step up as a support.

Next we have the 48,200 area which bitcoin came near before bouncing a little as I type this. So I will be paying attention to if this level does become a support. Oddly, it wasn't really a big pivot level, more so a consolidation after price rallied off the 44,500 pivot point.

Which would represent the next potential support level. The 44,500 pivot was much more prevalent as it marked the turnaround from a hard selloff that commenced after bitcoin had spiked to a new high at the time.

We shall see how it all plays out, but those are the near-term levels I'm keeping my eye on.

Wow nice dip, I bought yesterday, will buy some more at this level. I have been buying daily since this drop started, hoping the math of consistent purchases overtime helps me stay in the profit. I wonder if the buyers will show up now or wait to see 44,800?

I agree with you, this is a good entry point or stacking point.

Hmmmm I wonder if it will hit 44,500?
No matter, I am buying at this level, April is suppose to be a bad month for Bitcoin historically according to @edicted and so I am a buyer on all dips. Even thinking of selling some of my ETH to go heavier into Polkadot.
You following Dot?

I bought some more last night at 50K and also grabbed up some more RUNE. I added to DOT at 35 early in the week. Guess I was early on that one.

You and me both...I bought higher then you and thought I got a bargain below 40! LOL!
These dips test your metal and belief in "Buy the Dip" when you buy again below what you paid last week. :)

Don't worry. Baby DOT is sleeping now , but I'm sure it will surprise everyone. POLKADOT is going really well and many projects adding to their parachains. It's one of my favorite coins

LOL
I believe it!
The future of Ethereum second layer solutions is exciting.

I agree with it blowing through that first support level look out below.

Yeah, the 44K area below I think it most relevant.

This is my perspective with ultimate support at $44k region. 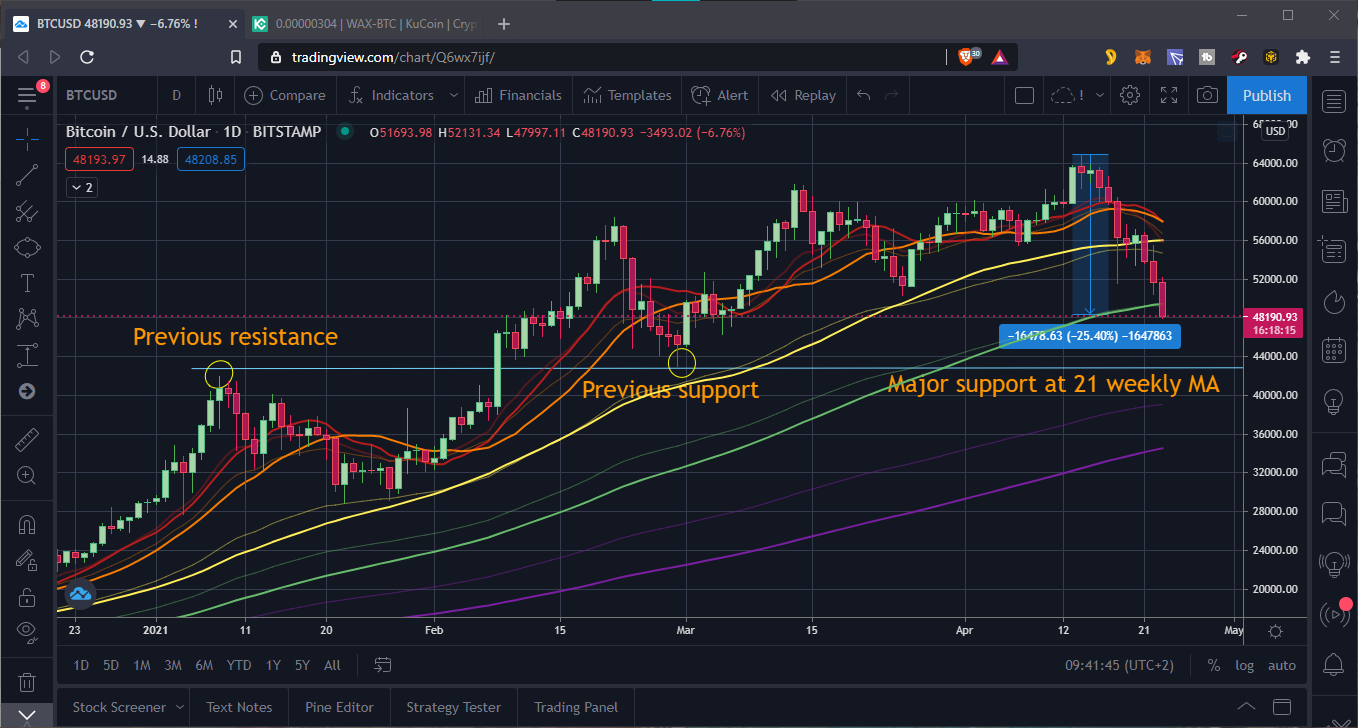 Yup, that area is definitely the clearest support.

I think this is a very reasonable support level.

So, according to what this chart shows, the price will not go below 40K, it is a relief as it is something much better than what happened in 2018 and also with the constant pumping, at least there are signs of an early recovery.

40K is a prior pivot top, we won't know if that holds until it gets there and tests it. Preferably it never gets that low, but anything can happen and price can go down to painful levels if it wants or moon to unbelievable ones.

It has been interesting to see how far it would drop and where it would recover to. I am actually pretty happy with where it pulled back to. We are still looking good versus where we were six months ago and we still have a lot ahead of us I think. I wonder if the "experts" are thinking about adjusting that $360k mark they were talking about a while ago.

It can dip to as low as $39,000 and still in a bull market. Many weak hands will regret selling it now. As @edicted said, May it's gonna be a lot more fun.

Yes, that is what all the normies don't get. Price can drop a bit still and still be in the long-term bull.

This is so true, and it's so common for crypto, especially Bitcoin.

I can understand normmies are having their brains twisted over this.

True...short term dips, while still in a longterm bull run..

I did most of my buying at the top like a goof. I am buying all the way down, small purchases. Now is a good time to create paper losses and help offset some gains

Yep, and the beauty is currently no wash sale rules on crypto. You can sell at a loss and buy it right back.

It looks very good so far the correction. Personally I expect BTC at $45K and $42K. Especially 42K$ since at that point there was a quite evident bullish rejection on January 8, so it will surely be a quite strong support.