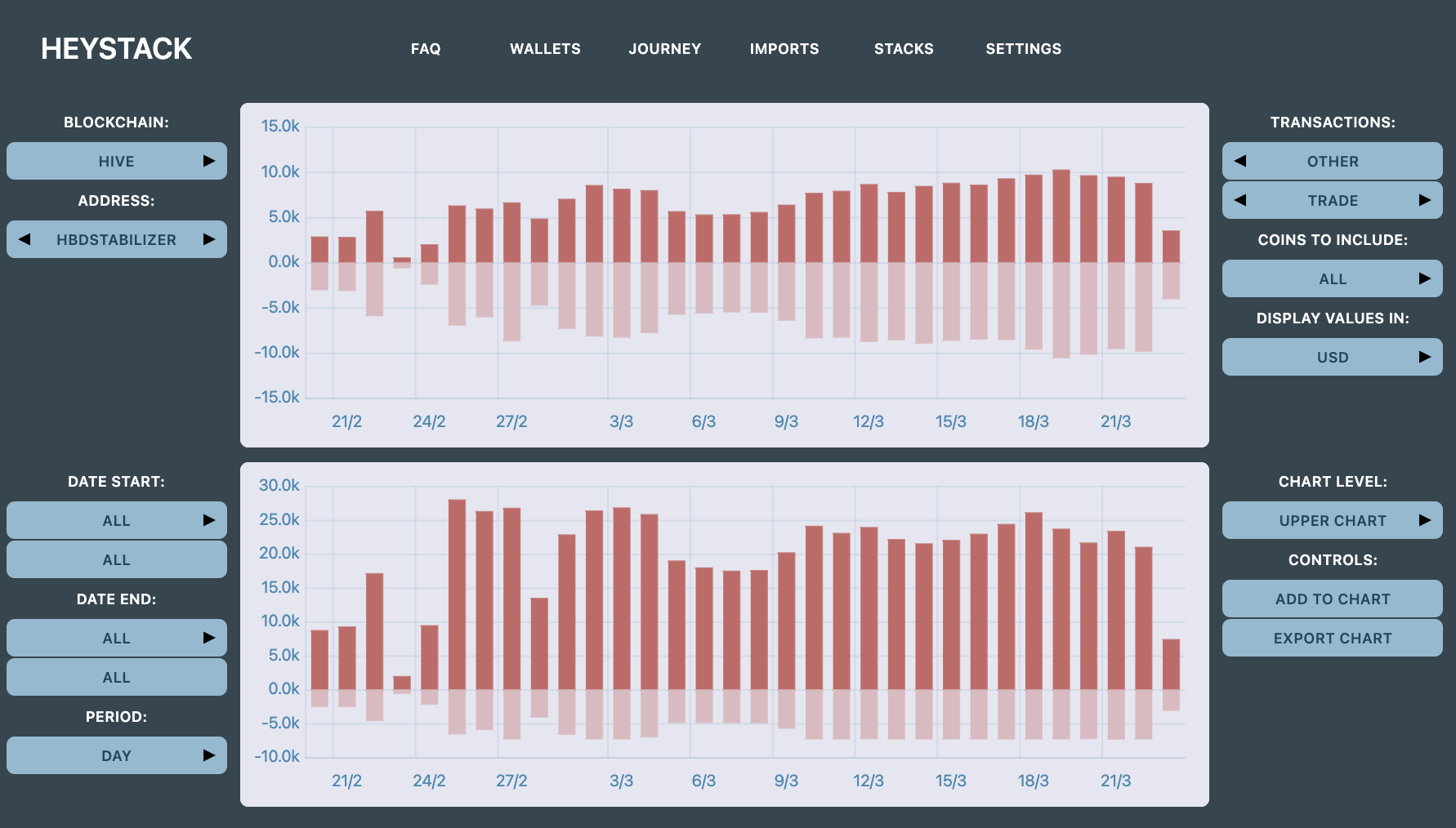 Most regular Hive users are probably aware of HBD stabililzer by now. It's a DAO funded proposal which sells HBD (when its value is above $1) and buys HIVE; the aims being to help move the HBD price back towards $1, to help the Hive price go up, and to make some profits for the DAO.

In addition to the funding from the proposal rewards there has been some additional funding generated from post beneficiary rewards. There is now a supplementary DAO proposal (I assume this will remove the need for the posts) which you can read about here:
https://hive.blog/hbdstabilizer/@smooth/supplemental-funding-2-for-hbd-stabililzer

There are a few figures included in the new proposal post, for example the daily amount of Hive being purchased. I thought it would be interesting to look at these figures in more detail. It's something that's easy to do with HeyStack!

For those who haven't heard of it before, HeyStack is a Hive-orientated crypto portfolio tracker project. You can use it to look at your own Hive journey, or to track your whole crypto portfolio using Hive data and exchange data.

The briefest of instructions if you want to do this kind of thing yourself.

Steps required to look at the @hbdstabilizer account (see the links for details):
(1) Add the hbdstabilizer wallet.
(2) Load the data.
https://hive.blog/hive-167922/@miniature-tiger/heystack-launch

(3) Use the journey page for charts.
(4) Export the data from the wallets page if you want more detail.
https://hive.blog/hive-167922/@miniature-tiger/heystack-launch-your-own-hive-journey 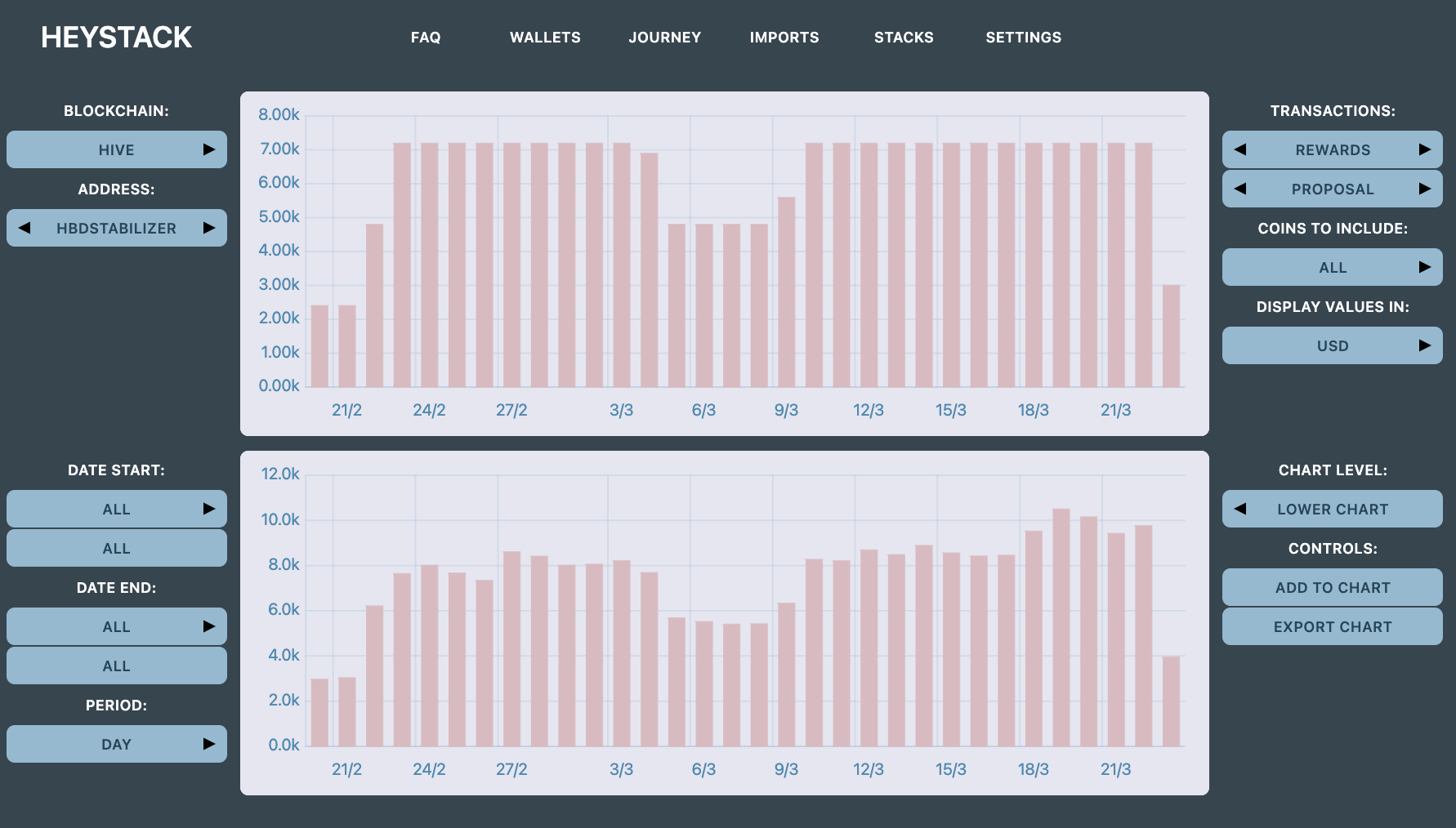 TRADES OF HBD TO HIVE

The daily funding is traded from HBD (shown as negative) to Hive on the internal market.

The upper chart USD values are broadly equal between HBD and Hive (as would be expected aside from some minor distortion from using end of day prices in the charts).

The lower chart shows that 20k - 25k HIVE is currently being purchased each day.

TRANSFERS BACK TO THE DAO 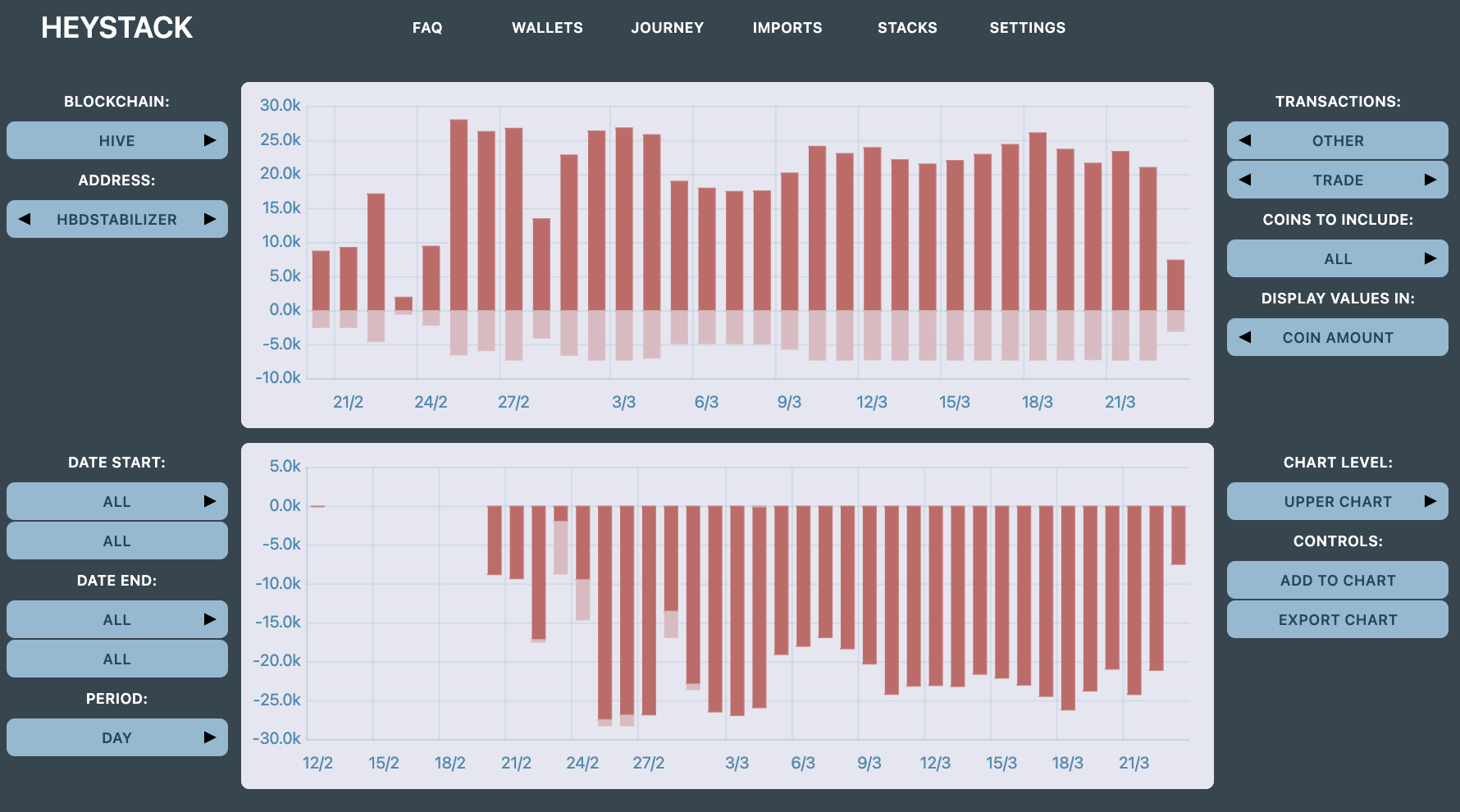 The lower chart shows the transfers of HBD and Hive (the timescale is messed up by one earlier unrelated transfer). It's mainly Hive being transferred back to the DAO with some HBD going back untraded.

From the three sets of charts above you can follow the flow of money from the funding, through the trades, and transferred back to the DAO.

From the export (see later) I make it: 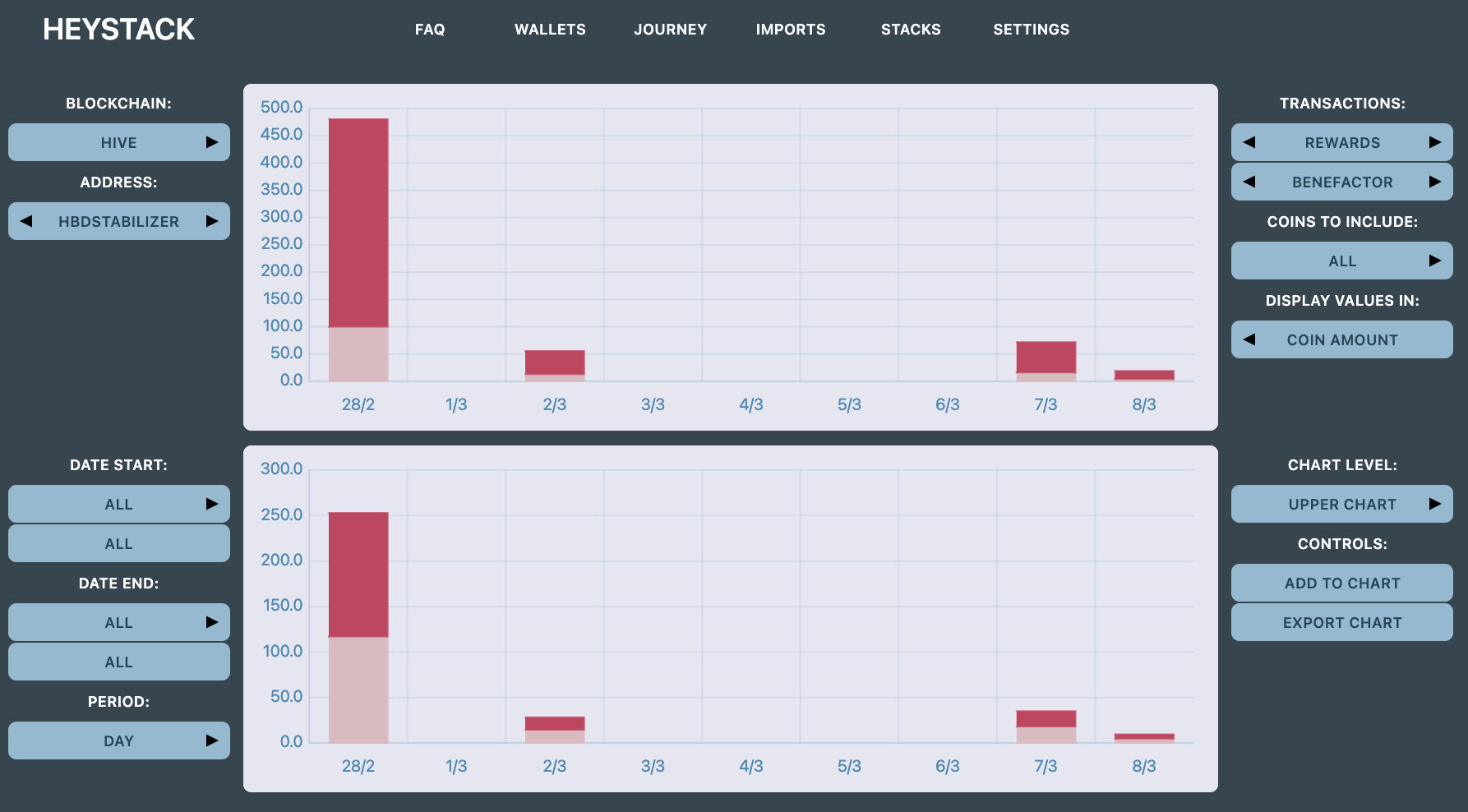 Pretty small in the overall scheme of things. The two recent posts have not worked through yet. The large reward at the start is from the original proposal design post. 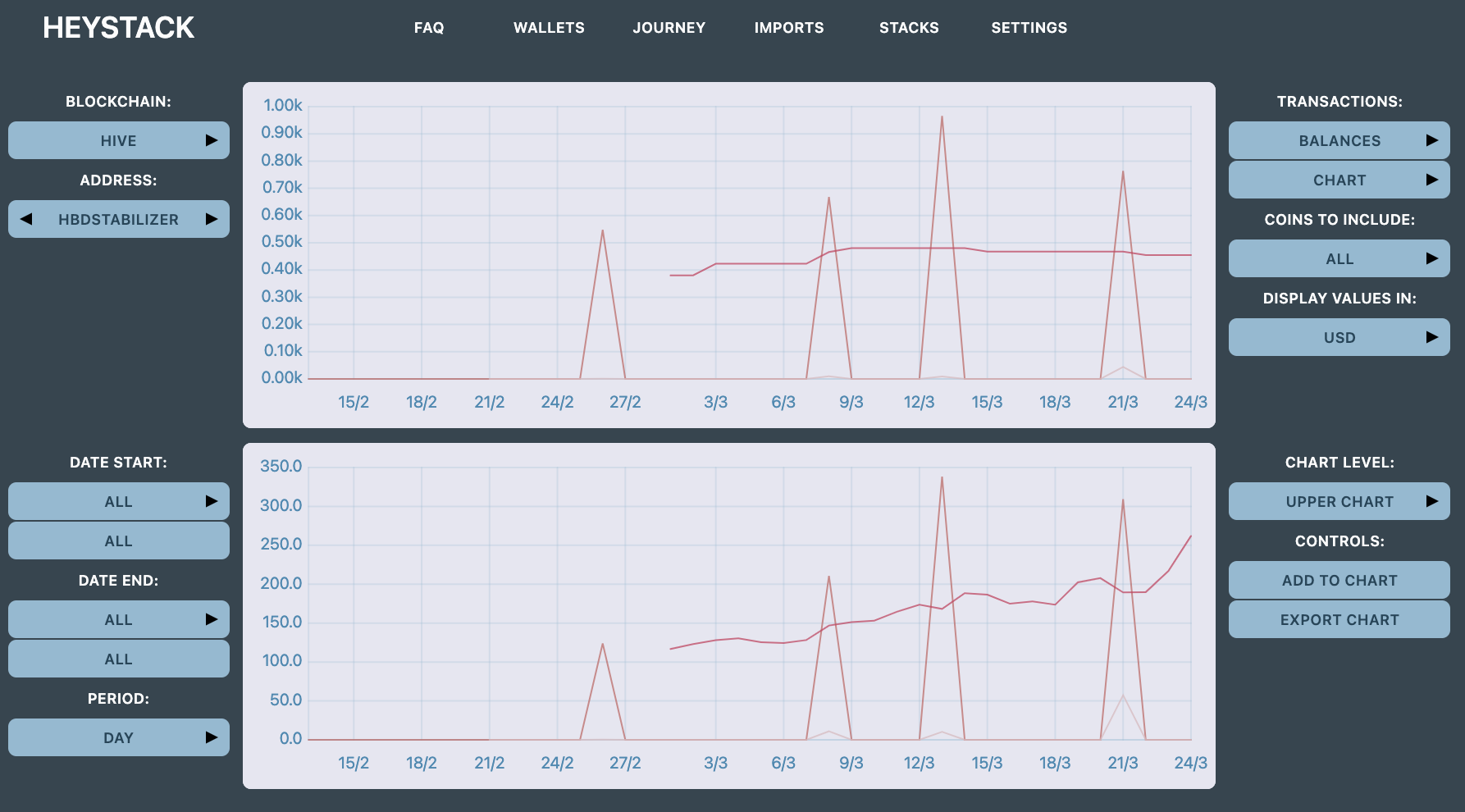 Balances are mainly at 0. A few spikes where the last set of funding / trades for the day have not completely cleared at day's end so are captured by the daily chart.

The Hive Power (red) balance is from the post beneficiary rewards. It's on power down with transfer to the DAO (you can just about see the dips on the upper chart).

If you are interested in more of the detail you can export all the Hive transactions from HeyStack to a spreadsheet. I've used this approach to look at the internal market trade prices for the trades made: 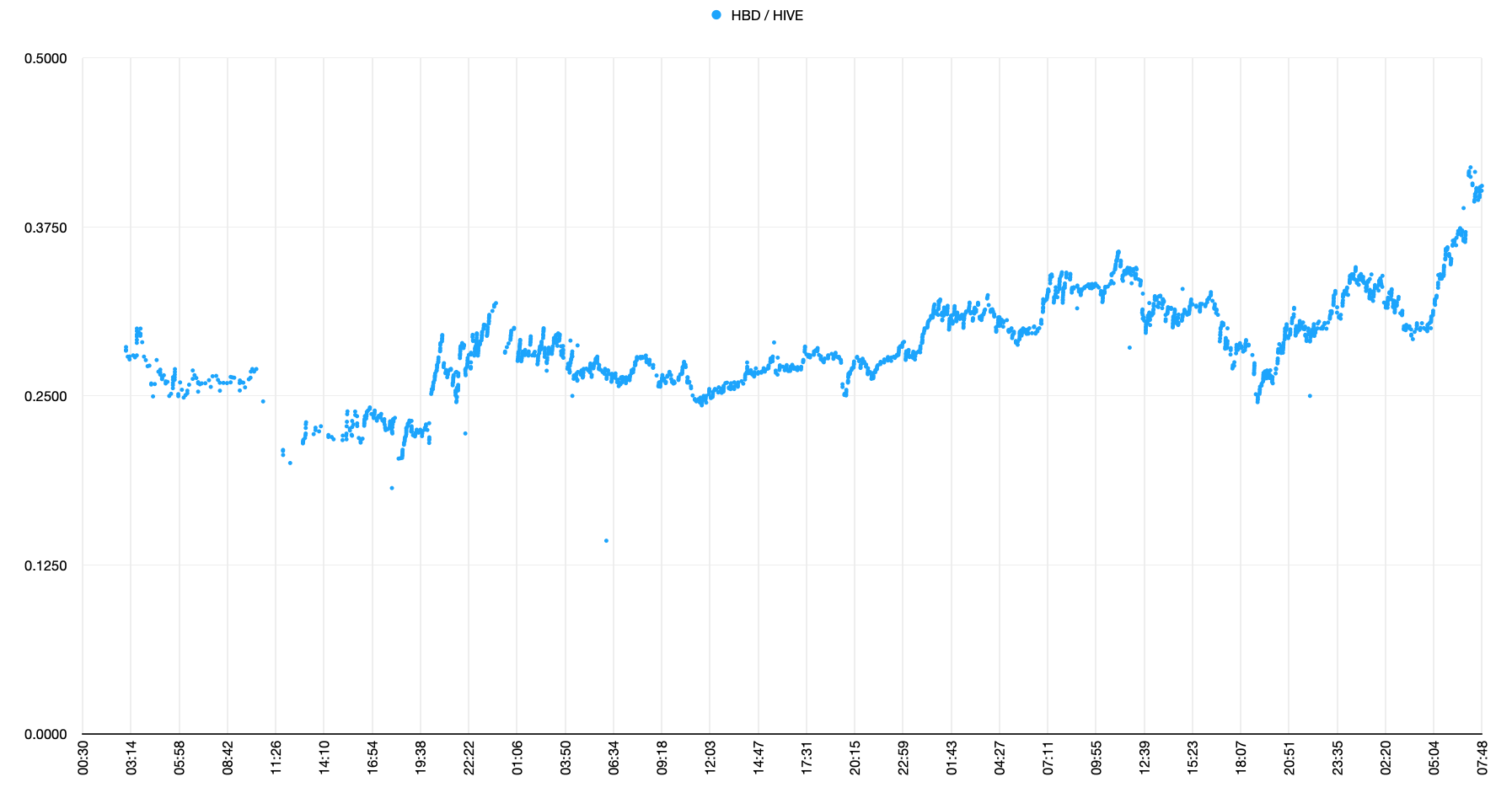 All the trades. The outliers will be distortions from minimal trades. 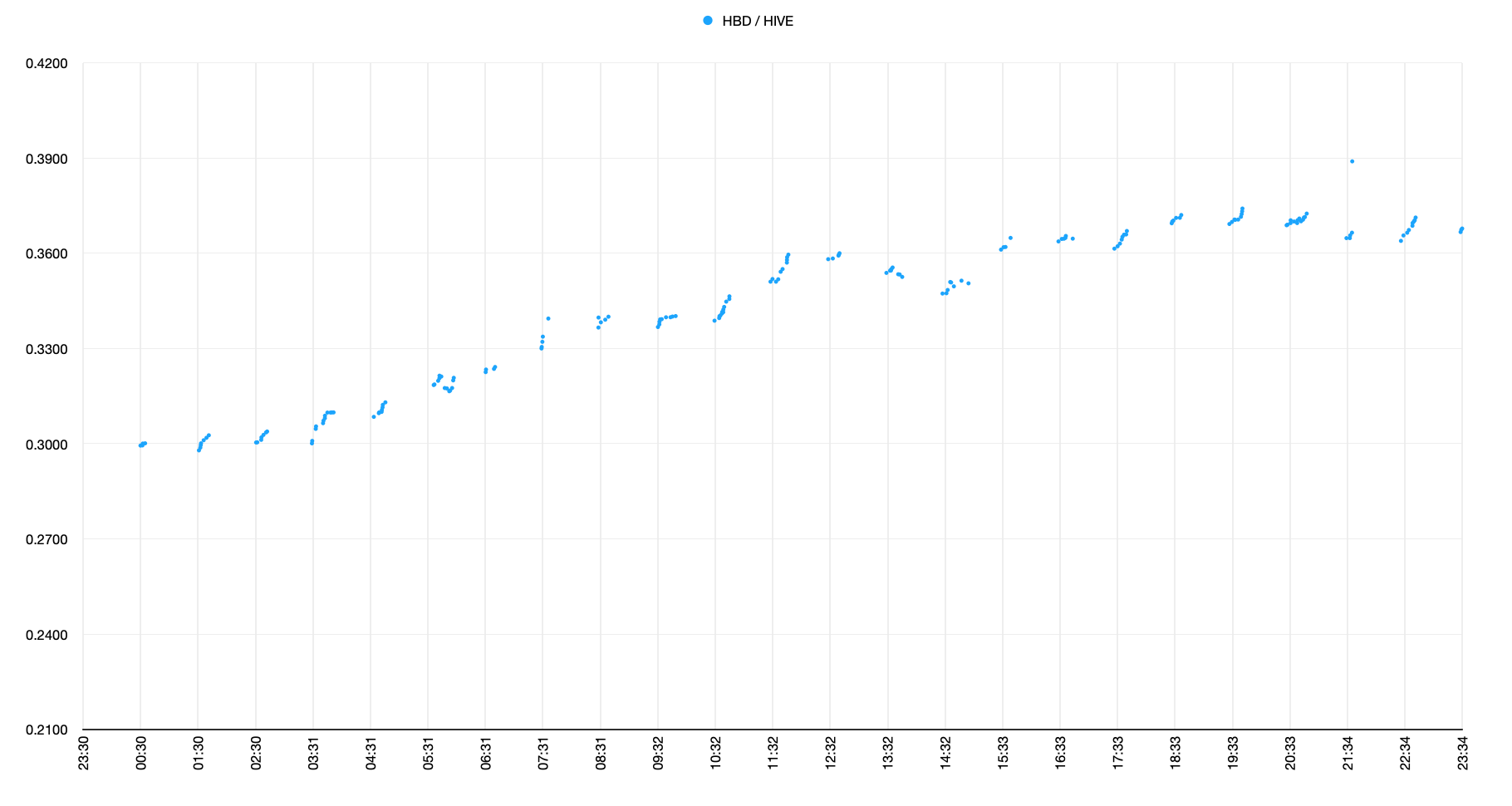 Here you can see the twenty-four sets of trades going through for yesterday; one set just after each hour. The prices obtained are pretty tightly bunched. It's Hive vs HBD (greater than $1) rather than Hive vs USD if you were wondering about the price levels.

That's it for the data.

SOME GENERAL RANDOM AND UNRELATED THOUGHTS ON HDB STABILISATION

What about using the DAO as a stabilisation fund?

Rather than individual proposals and posts, would it be possible / a good idea to use the DAO fund for HBD stabilisation?

When HBD is above $1 the DAO could be coded to use the same approach as under the current proposals, just with a greater volume / speed. Witness parameters could be applied to control the tempo.

However, the profits generated by such an approach would not be consequence free. Significantly increased printing of HBD risks running us up against the maximum debt (HBD) to ownership (Hive) limit, with a greater potential for an HBD haircut in future if the market falls.

How to solve the HBD haircut issue?

It is very difficult to get out of an HBD haircut situation once we are in it. HBD conversion is not profitable and results in increased selling of Hive, lowering the Hive price and potentially exacerbating the problem.

Probably there should be more focus on avoiding getting into the HBD haircut situation in the first place, i.e.
(a) Stricter limits on HBD printing so that an x% (50%?) market fall would still not bring us to the debt-to-ownership limits.
(b) Some form of incentive to convert/burn/remove HBD when the above pre-fall limits are close to being reached.

Could the DAO use Hive to buy up HBD from the market when HBD is at $1?

Moving HBD into the DAO removes it from the debt-to-ownership ratio (since HBD in the DAO is not included). As an addition the HBD could be converted to Hive once purchased to complete the circuit (if more HBD is purchased than is needed for proposals).

Essentially this manages the risk of the HBD haircut but does bring sell pressure to Hive. It's perhaps a question of bringing that sell pressure in good market conditions, i.e. when Hive is well above its long term average price. Probably best to get it done today.

In a haircut situation:

That's it for today! HeyStack is free and open-source (FOSS). If you like my project upvote to support it!

You can see a live version here:
https://miniature-tiger.github.io/HeyStack/

You can find the github repository here:
https://github.com/miniature-tiger/HeyStack

(a) Stricter limits on HBD printing so that an x% (50%?) market fall would still not bring us to the debt-to-ownership limits.

100% agree with that. Although I would chose a percentage of 90%, since crypto is very volatile and hive collapsed 99% in the last bear market.

The only other possibility I see is to cash out the profits from the @hbdstabilizer operations to a stablecoin outside of hive, for example DAI.

Then, when we get into haircut territory, use the accumulated DAI to buyback HBD and burn it. The reason it should be a stablecoin outside of Hive (not HBD) is because HBD goes below a $1 in a bear market, especially after the haircut ratio is reached.

So the profits we keep in HBD will lose value if we keep them all in HBD.

100% agree with that. Although I would chose a percentage of 90%, since crypto is very volatile and hive collapsed 99% in the last bear market.

The only other possibility I see is to cash out the profits from the hbdstabilizer operations to a stablecoin outside of hive, for example DAI.

I was going to suggest something similar to this. Essentially a foreign exchange reserves option. Solves the problem of having to use Hive to support HBD and the effect that has on the Hive price after a market fall. A basket of stablecoins could be used to prevent the counterparty/failure risk of individual chains.

It would be easy to set up in a non-trustless fashion but more complex to make it trustless. Although this could be solved with the arrival of layer 2 smart contracts I would think.

Since we know how much hive can go down I think it's important to be cautious. Right now that is too strict yes, but if hive goes to $5 this year then I think it's necessary. If the market-fall-protection number could be adjusted based on the amount of time hive took to rise x% in price then it would be the best option.

The faster hive goes up the higher the market protection should be. The longer we sustain a price level the more we can relax it.

I also don't mind relaxing the debt haircut ratio to somewhere below 50%.