HIVE runs deep in our veins. The LeoFinance Community has always aimed to grow: in terms of engagement on-chain, capital on blockchains and now liquidity for Hive-based assets. We have done a complete 180 degree turn in the business model governing CUB Finance on BSC. We are now focused entirely on HIVE and HBD. Building liquidity for bHIVE and bHBD pools.

The war on centralized exchanges has been waged by governments across the globe. We're seeing a massive crackdown on the operations of many exchanges. HIVE and HBD are scarcely listed on CEXes.

As it stands, most people don't have access to these CEXes. This is a huge problem and is likely to only get worse.

bHBD and bHIVE are not the end-all-be-all solution. They're not the only solution out there. We also have the internal market, Hive-Engine, blocktrades and many other operations out there which facilitate the exchange of HIVE and HBD.

Our goal with bHIVE and bHBD is simply to build another solution. Another option out there in the Crypto universe.

A way to permissionlessly swap assets from one blockchain to another. Seamlessly moving your HIVE/HBD to and from the Hive & BSC Blockchains. The power in doing this is incredible but we are still in the baby stages of making this a reality.

The technology is there. Our bridge technology received a ridiculous number of updates (over 12 different bug patches!) in the past few months. This has led to a HIGH DEGREE of reliability in transfers.

If you've utilized the Multi-Token Bridge in the past, you may have had a failed TX that needed manual refunding.

If you've utilized the MTB more recently (last few weeks), you may have noticed a 99% uptime for bridge wraps and unwraps. This is an amazing achievement for us. We're seeing so much reliability on the bridge and it's made life a lot easier and better all around.

In the unlikely event of a failed wrap/unwrap, you can open a support ticket on our Discord and have it manually processed in less than 12 hours (used to be 48 hours). 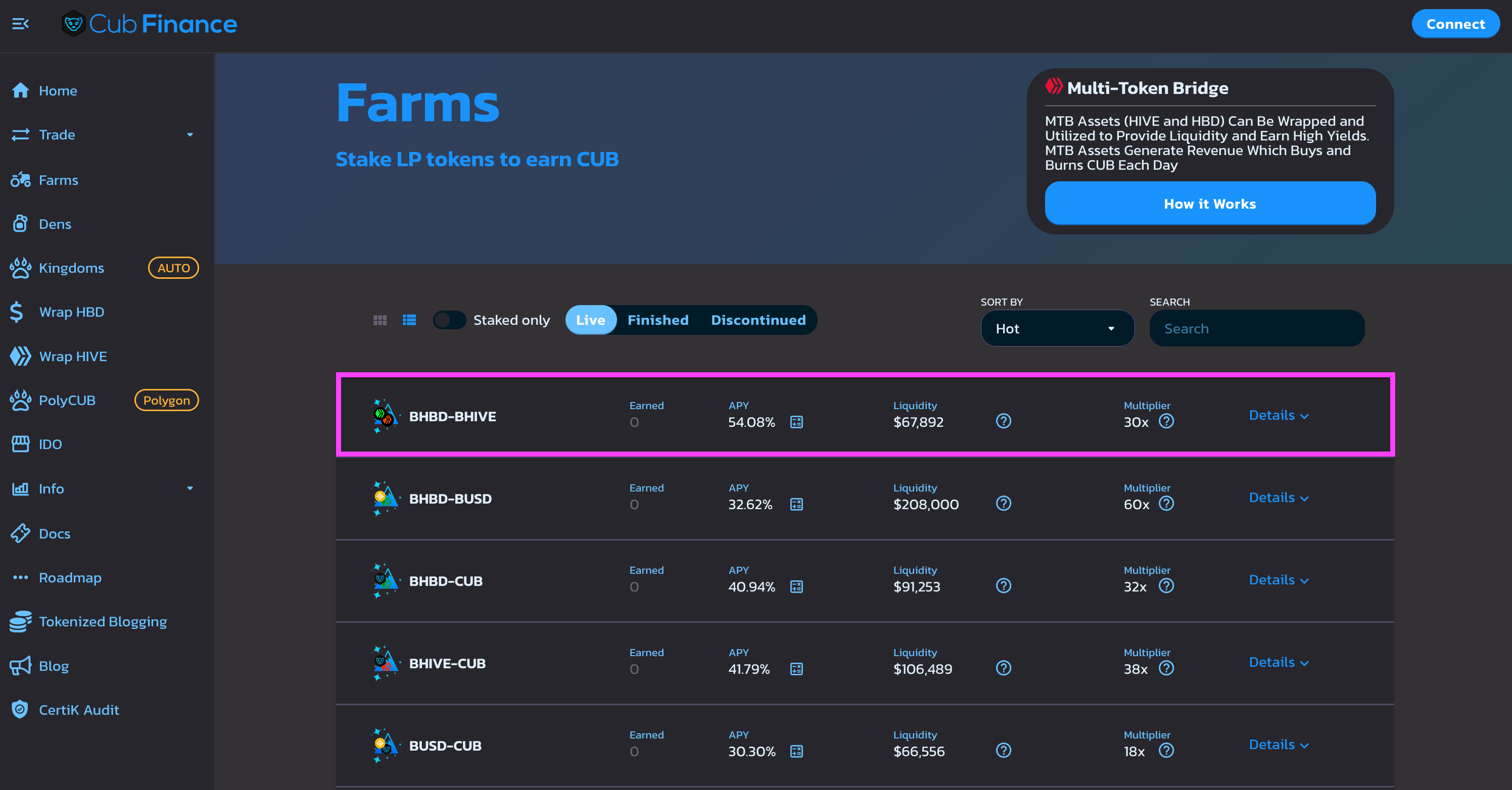 The newest vault on CubFinance is the bHBD-bHIVE vault. This is one of the most highly requested vaults from our community and it allows anyone to pool HIVE and HBD together.

This has a lot of benefits for LPs

Our focus on building liquidity for bHBD and bHIVE will never end. Be prepared to see even more multipliers flow toward the bHBD-bHIVE vault as well as the stablecoin vault which has been performing astonishingly well: collecting over $200k in total liquidity in less than 6 weeks.

How to Provide Liquidity

Providing liquidity is quite simply. There's a video tutorial on 3speak that shows you exactly how to do it.

The brand new CUB Docs also have some pages to help you out (timestamps in the video):

Want to trade bHIVE or bHBD and then unwrap the native asset? Trading is as easy as 1-2-3 and there is often a premium or discount on HIVE/HBD. Meaning, you can buy HBD/HIVE at less than the market (discount) or sell HBD/HIVE higher than the market (premium) depending on the current price.

Having a decentralized pool as a means to exchange assets is beneficial for the entire Hive blockchain ecosystem. As we aren't listed on big exchanges, this for sure offers a quick way to exchange and also a mean to earn as a Liquidity Prodvider.

We are one of the most decentralized blockchains in the world. No founder. No bs organization driving the ship. Just us, the community, to run things. Liquidity getting more decentralized is vital

Hopefully Hive will be listed on bigger exchanges (for example on Coinbase) in the future. The userbase is constantly growing. Nowadays mostly Splinterlands is the driving force behind it. Hopefully there will be other successful projects too on the Hive blockchain.

Hive is listed on Binance and I believe Binance is a very big platform.

Binance is indeed one of the biggest cryptocurrency platforms.

High liquidity in decentralized applications such as Cubdefi will also reduce Hive's dependence on centralized exchanges.

I've never joined any liquidity pool yet mainly because I don't understand how this thing works and the issue of impermanent loss which sort of scare me away
But I have around 160 hive sited right now doing nothing, so is that something good enough to try or I need to grt more?

Are you playing Splinterland? Putting Hive in DEC:HIVE or SPS:HIVE or DEC:SPS LP will get you a good APR in Hive system. You don't need to transfer out your HIVE.

More external liquidity like? And for what investment please 🙏 🙂

No am not, and that's because I hardly understand that stuff lol 😆 But the LP pool within hive ecosystem does interest me if I know a bit what I'll gain for what amount invested. 😉 This is what have been looking forward to doing if I have somebody to put me through.

Liquidity might not be a problem, but at the same time, good to start off with little amount and watch how things goes. Could you guide me on these?

Thanks for stopping by and for thy help so far😊

This is a powerful marketing piece for $Hive and $HBD. The future is here as brought to us by CubFinance.

The future is now!

I think I am one of the few who has been procrastinating on learning about Cubdefi and providing liquidity for the LP. This wouldn't pass me by this time around, I'll be sure to check the 3speak videos and other sources for guidance.

Get in there and start earning!

Hive as a Decentralized Blockchain (Dapp) has many use case. I didn't know that there are more things users can be engaged in to receive more incentives. I need to really take time to study how most of these products work; BSC, Polygon, Token Bridge and others.

Thanks very much for this important updates.

I give it a first try then but my binance address is not connecting with cubdefi I have to make more HBD this time around to put on another wallet. Want to go through trustwallet

Try opening a Tech support ticket if you need 1-on-1 help. Nifty can help you in LeoDiscord

Okay Nifty is my good friend I will ask him for help.
Thank you

"We have done a complete 180 degree turn in the business model governing CUB Finance on BSC."

What does this mean with regard CUB itself. Is it no longer relevant?

Quite the opposite, actually. I highly recommend reading the 1st CUB Monthly Burn Report which outlines the strategy of the Multi-Token Bridge: https://leofinance.io/@leofinance/cub-s-first-monthly-burn-report-or-august-2022-204k-cub-bought-and-burned-50-yield-on-hbd

The strategy is utilizing the Bridge to generate revenue from:

Then, buyback and burn CUB with the revenue. Since implementing this strategy ~500k CUB has been burned 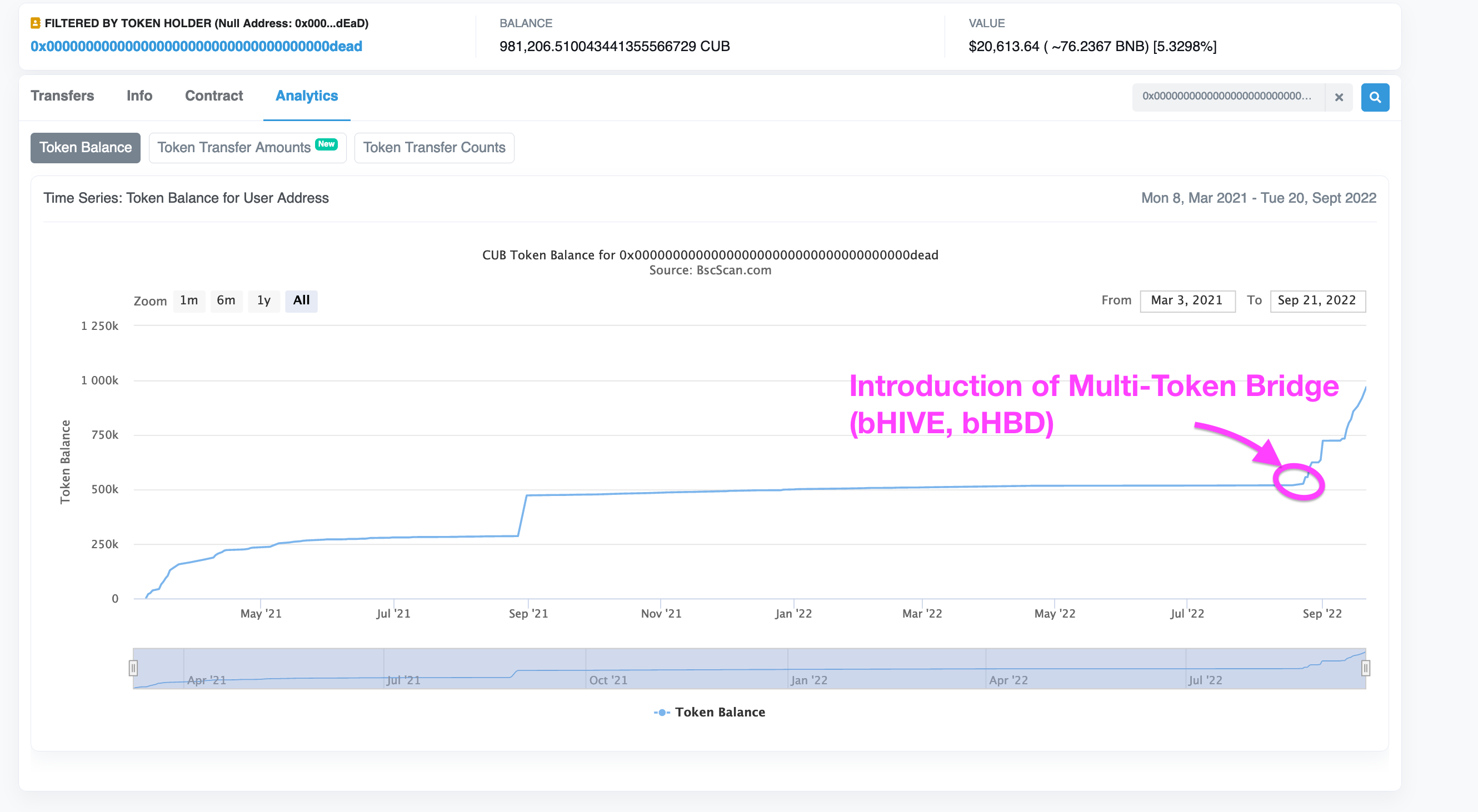 OK. Thank you. The way it was written made it sound to me (being somewhat the defi challenge) as though the focus had shifted from CUB to the Hive tokens. 😂

Nope CUB is being paired to bHIVE and bHBD and simultaneously, bHIVE and bHBD generate a disproportionate amount of revenue for CUB which burns CUB daily

I added some liquidity as soon as I found out about the bHBD-bHive pool, because yeah, I need not worry about IL at all since both are Hive assets that I am building on. Plus of course, the rest of the benefits mentioned in this post. 👍

Exactly! You almost want some IL to happen in certain directions. DCA your way into more HIVE or out of HIVE on a bull run and capture profits as HBD

More power to hive community as this way we can earn more. This apr is so high and something that should not be missed at all..

Need to spread the word!

yes for sure. More people should know @leofinance, sorry to see you have less Hive Power.
Your level lowered and you are now a Minnow!

CUB Finance is doing a great job going forward. I think it is vital that the decentralized blockchain has decentralized pools of liquidity. I stay away from centralized exchanges now, thanks to CUB Finance I have the opportunity to instantly buy or sell large amounts of Hive or HBD from a decentralized pool. It's also great to see highly profitable investment options. Enlarging the liquidity pool can bring great benefits both to the Hive ecosystem and to us as a community.

Really glad to hear that! Yes, CUB is trying to build out more decentralized liquidity for HIVE. It's become more important than ever that we do this.

Right now, the focus is continuously stacking up the liquidity. The deeper it gets, the more beneficial it is both for Cub and Hive

Earning from liquidity providing is among the many ways to earn income in the crypto industry passively. It is interesting that CubFinance is making this possible for Hive, HBD and LEO holders.

Just the beginning! We need to get more HIVE and HBD bridged over!

Great read with some helpful information.

I've been trying to figure this out but I can't connect to anything in Cubdefi at all. Multiple browsers and devices. Connect buttons are all just nonfunctioning. Doesn't lead anywhere, load anything, do anything. VPN on and off...

Interesting but to be clear, when I look at Cubdefi for this liquidity pool, we don't "Earn more HIVE & HBD" but we earn CUB.
And the APY is more complex: 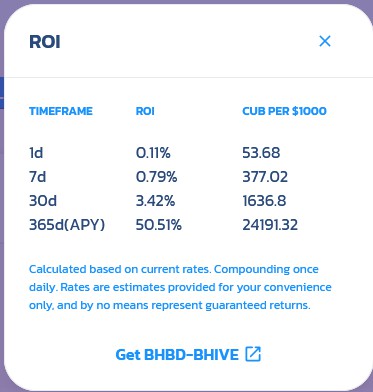 Awesome news, I am so glad the ecosystem is growing. Hive, especially HP is perfect for long term staking. What a great project. The growth potential is massive for Hive when gaming and DeFi is included, and NFTs are already here. Tx fees are zero and tps is super. This can only get bigger with more exposure in the coming next bull cycle.

I really like the Plan B sales or promotion angle for Cubfinance because unlike most sales techniques it creates nit so much a need, but a solution ,to a real problem: the current safety of investors funds on centralized exchanges, and entices them with profitable investments.
Nice job.

Dear @leofinance,
May I ask you to review and support the Dev Marketing Proposal (https://peakd.com/me/proposals/232) we presented on Conference Day 1 at HiveFest?
The campaign aims to onboard new application developers to grow our ecosystem. If you missed the presentation, you can watch it on YouTube.
You cast your vote for the proposal on Peakd, Ecency, Hive.blog or using HiveSigner.

I guess the interest are paid in CUBE?