leo.stats in LeoFinance • 11 months ago (edited)

Welcome to the weekly edition of LeoFinance stats report.
This is a weekly report covering June 29 through July 5th.
If you want to learn a bit more about the LeoFinance ecosystem and dig into the numbers, this is the place to be. A total of 6.65 M issued LEO tokens.
Notice that the LEO token doesn’t have a large inflation compared to the base supply and is slowly increasing its supply. Note that burnings are not taken into consideration in this chart. That will be presented below. 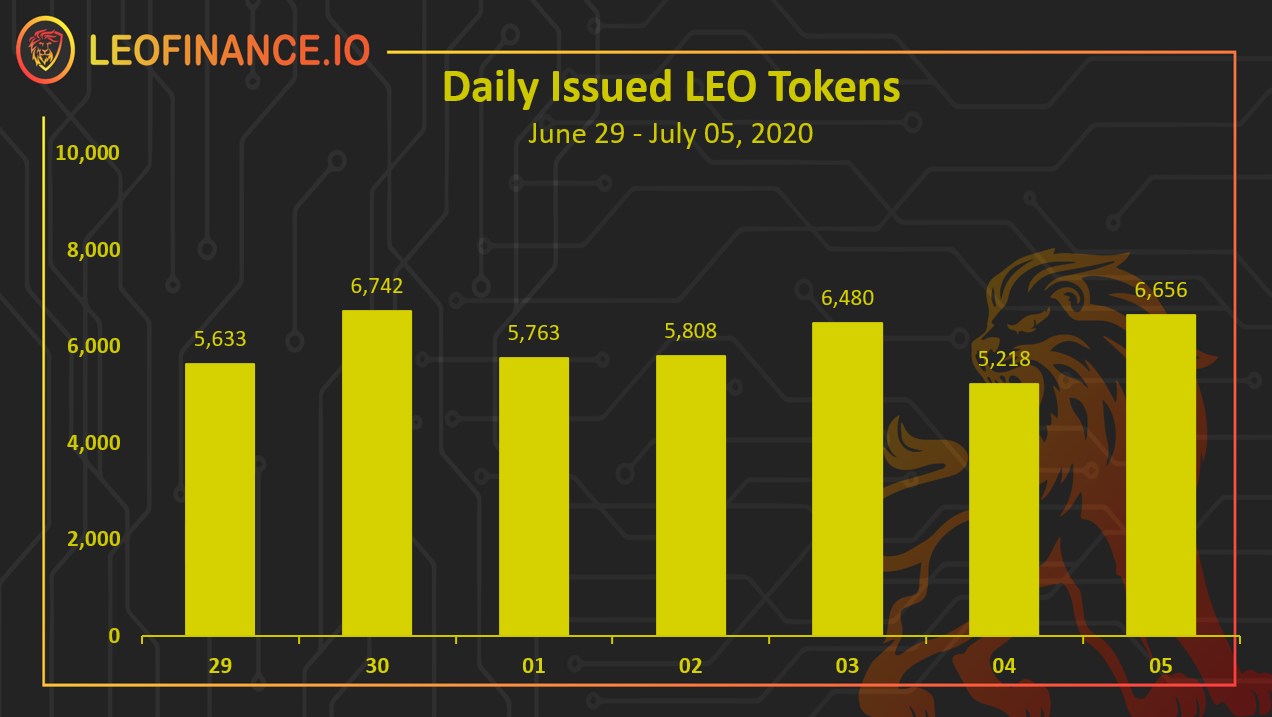 On average 6k LEO tokens were issue daily in the last week with a total of 42k tokens issued. @taskmaster4450 is on the first place with 2.4k, followed by @khaleelkazi and @steem.leo on third place. 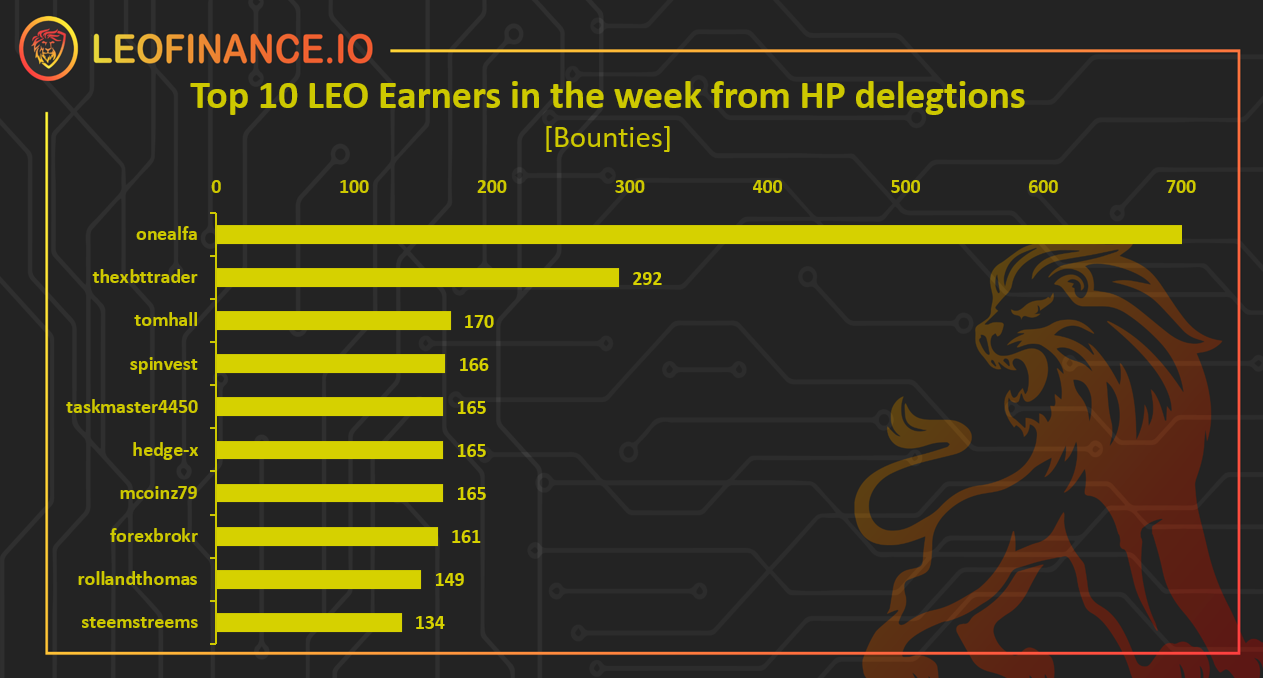 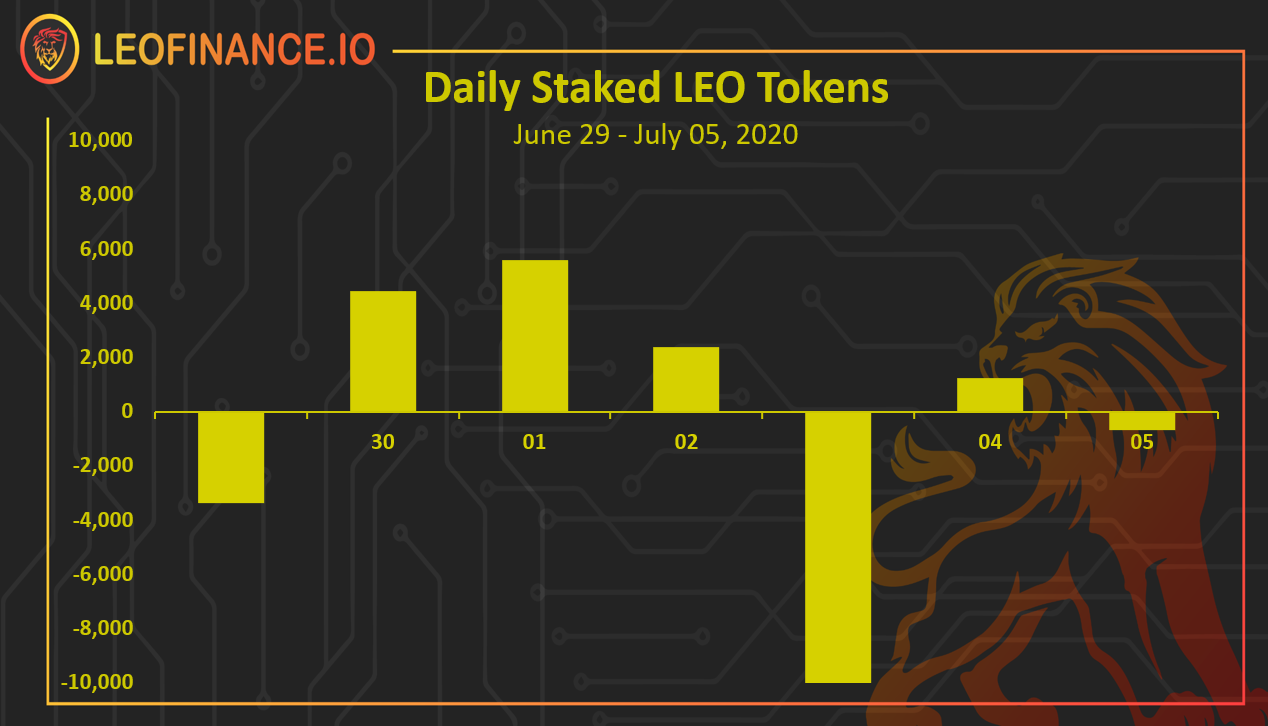 Some up and downs in the past week on the staking side. There days with negative net staking, a bit down after a fast growth in the previous period. @hedge-x is on top with 7k LEO staked, followed by @diverse and @khaleelkazi. 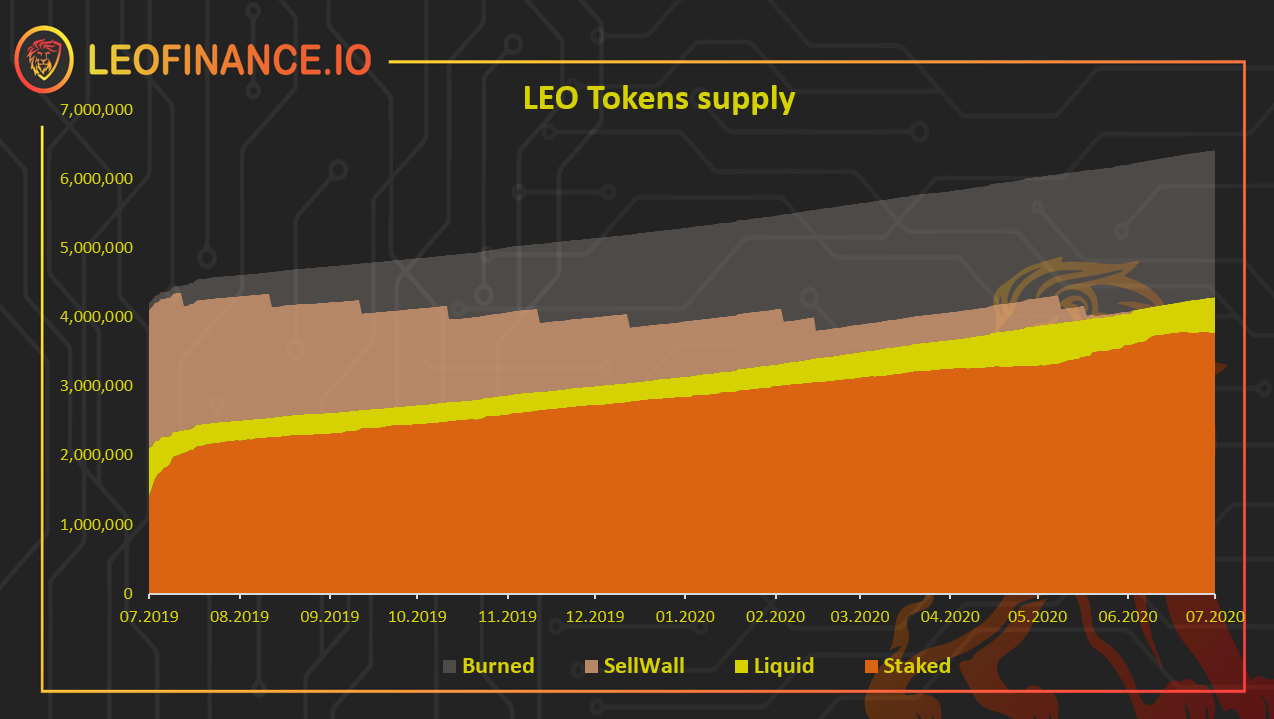 The sell wall of near 2 millions has been burned and we now have only the liquid and staked LEO. 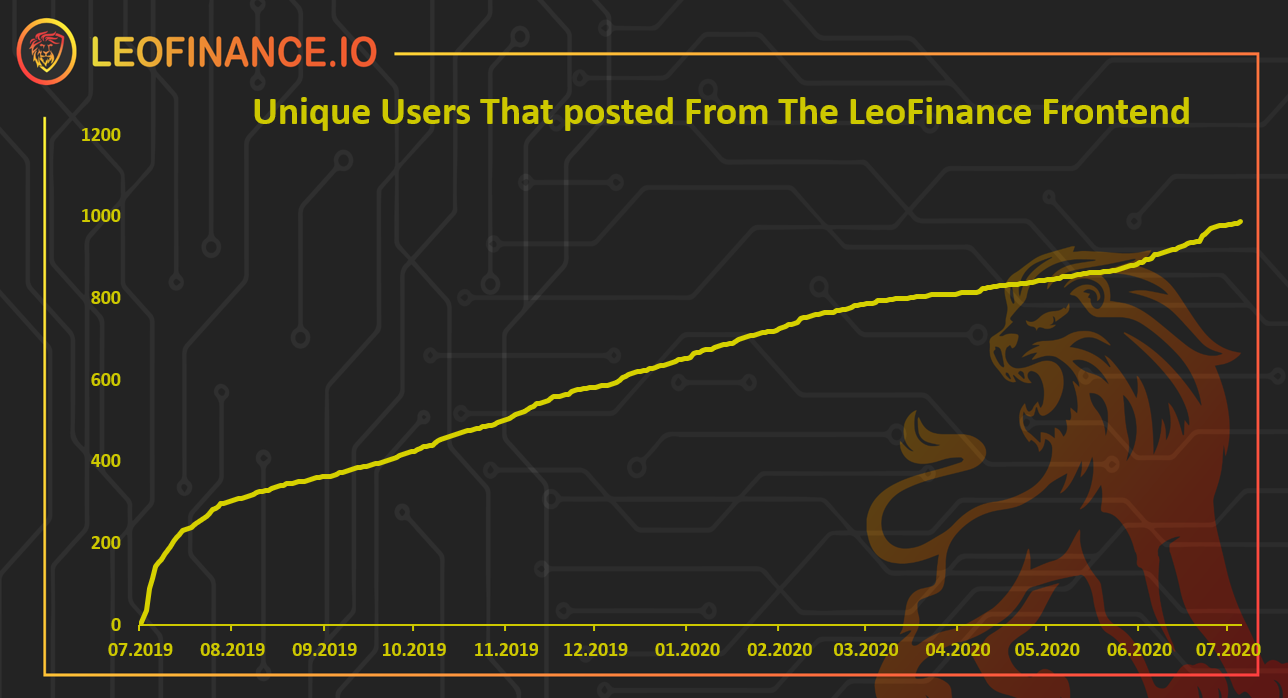 A total of 987 unique users have posted from the LeoFinance frontend.

In the last week there is an increase in the number of new users. Because of the HardFork, the frontend was down for a certain period of time and we can see that there was a drop in activities, but they are already climbing back and at the end of the week are going strong as we approach more stable times and growing! 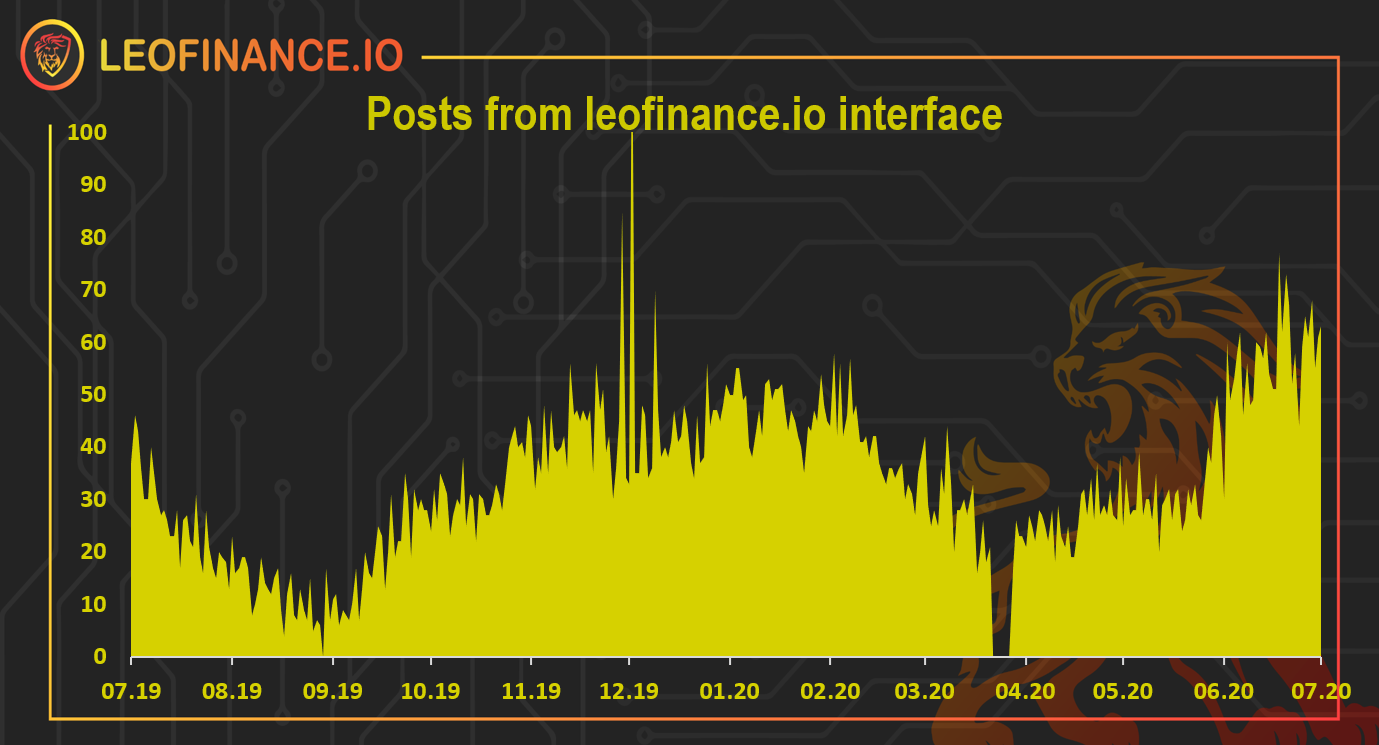 A nice growth in the number of unique daily active users!
LeoFinance has introduced a 10% incentive for posting trough the native frontend. When users post from other frontends and just with the leofinance tag they have 10% less rewards. 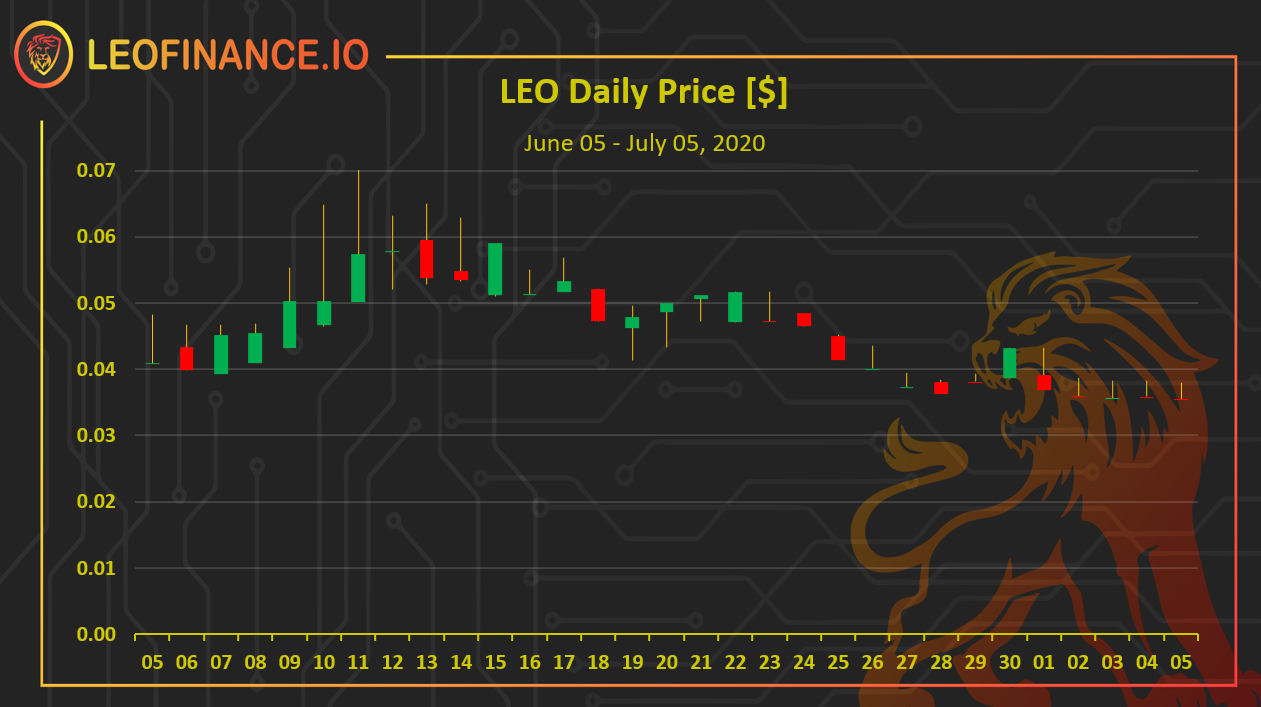 We are seeing a small correction in the last week for the LEO price after the massive run it had in the previous period. Corrections are healthy and give opportunity for interested players to come in.
Also, since the chart is in $ value, Hive had a correction as well and that combined has given a larger effect.

Last week was actually a bearish one for LEO especially due to the increased unstaking of LEO against the amount that was staked. We can see the resultant effect of this in the LEO price which has gone down to 0.16 HIVE. This could be linked to the long bear trend of HIVE. Moreover, information from the community has gone down and investors seems to get weakened. The more we talk about our product, the more it gains market value. However, LEO still stayed strong and will regain this week.

I'll be more active with marketing posts to restrengthen users trust in the token.

It is not uncommon for a token to pause after such a big move. A slight pullback is actually healthy. Lets other people enter who thought the price was running on them. There will come a level where new buyers enter the market again.

Wahay I made the T10 staking table!

Very good and it is great to always see the path of ancestry. Good opportunities now with corrections. No fright with the price and let's move on. Great job guys!

Nowhere in this post do I see a LINK to delegate. You have this without a link:

You guys should be making it easy and frictionless to take actions in support of LEO.