The Power Of Manual Curation & How It Affects Content Creators

hitmeasap in LeoFinance • 3 months ago 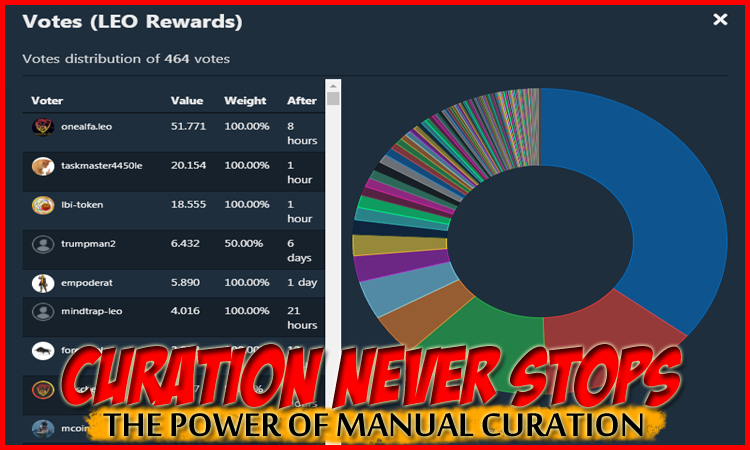 Content have ever since the early days of considered to be old once it has been alive for roughly 24 hours and if you as a content creator didn't recieve upvotes during the first very few hours, you where pretty much destined to walk away with some crumbs while you wished for a large piece of the pie.

Many content creators have the same mindset to this day, for various reasons. It might be because it has "always been like that", because of the reward curve or the behaviour of token holders.

With this post, even though I have mentioned this in the past as well, I want to show and tell you how manual curation is literally the perfect piece of the puzzle for content creators.

My last post is about to be paid out which means that the post is roughly 6.5 days old right now. In the old days, I could never imagine getting upvotes on a week old article but LeoFinance and manual curation increase my chances of being rewarded until the very last second before the article pays out. While most users are still upvoting content early, there are more than a handful of users who doesn't seem to rush things. We don't have to compete over curation rewards on LeoFinance due to the 50/50 split and that makes things a lot better. People can curate in peace, without feeling rushed and they can enjoy content in whatever pace they want.

Feel free to take a look at it, I'll just show you a snippet of it: 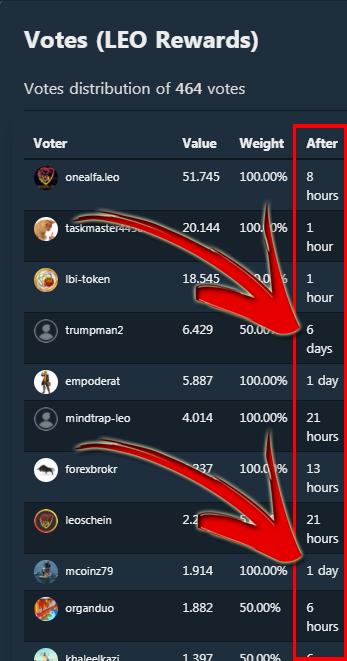 I don't know if @trumpman2 would have upvoted this specific article if it weren't a curator's pick or if it didn't have a bunch of rewards, but my best guess is that he would have. Regardless of the pending rewards, because he doesn't have to compete over rewards. Both him and @themightyvolcano upvoted this article during the last few hours. Others upvoted the article after 21 hours, 1, 2, 3 and 4 days..

Sure, there are reward-seekers out there who does things only for the $-rewards, but rewards to me are more than money. Comments, reblogs or even articles from other users who got inspired by something I made is something I see as a reward as well. Those things are truly rewarding.

Never underestimate the power of an upvote, regardless of the value or weight behind it.

Unless Blocktrades decides to censor you.

How is that possible?

I used to think my upvotes were pointless because my power was low but I have been enjoying upvoting others and as each day goes by I get a lil more power to upvote others.

I do like the open rewards and straight 50/50 split. Makes a better system and I'll often go back to older posts and upvote them. I have never understood why there is a limit though.

And we rarely see this on Hive . I was talking to few others about this , I wish Hive shifted to linear curve soon you know , it will benefit a lot .

If it wasn't for manual curation I wouldn't still be here as a content creator. Leofinance has found the sweet spot for curation without the shitty curation curve and this community seems to be having the best curators. Milkers and farmers seem to be leaching out of Leofinance as well. This for me is so far my best experience on blockchain.

I will upvote or reblog a post based purely on the content of it; though honestly it doesn't take me much thought to decide whether I like a post or not. It can be long-form or short-form, too. My goal here is the community, not to make tons of money. In fact, I have been making hive for years. I don't even both converting it to regular currency... because I simply don't care.