A Life-Changing Journey & A Comfortable Victory. 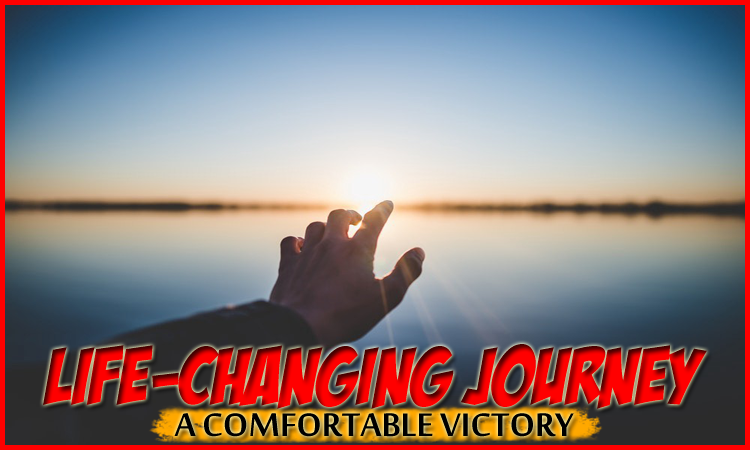 I recently came across a wonderful article by the most recent crypto-millionaire I know of and while I am extremely happy for this specific individual, and even though I personally have not even touched the surface of a million so far, I spent some time being truly grateful for this life-changing journey...

I knew about LeoFinance a long time ago but I never jumped in on it. Not because I didn't believe in the project, but because I was "fed up" by all the despair, anxiety and annoying bullshit that I've seen & heard since I joined in July 2016. You see, I'm a simple man. I believe in money and I usually have problems focusing on more things than one at the time.

That is probably why I dropped out of Highschool. I wasn't interested in whatever they tried to teach me and I have always wanted to find my own way in life. Fast-forward a bunch of years and I was working extra as a freelancer online. I did "gigs" on Fiverr and similar platforms. I worked my ass off for $5.

It was hard to live from paycheck to paycheck and I eventually took a leap of faith. I decided to become a full time freelancer and I started a business. A brand building business. It was a life-changing decision.

I will never forget the things I learned and the feeling of being my own boss. I worked for myself. I quickly started to scale things up and I hired people to work with. I got myself a dozen of co-workers which I trained personally, one by one and even though I seldom admit it, I have been a superb leader many times in my life.

It's like I was born with some form of leadership and I have developed that skill throughout the years. From my younger gaming days, when I lead my team mates on the battlefields to mentoring people and having a successful business that I set up on the computer from my kitchen.

Oh, I also did these things in my second language as I am not native in English.

However, I've never been truly confident and I've always looked down on myself in multiple ways so I've been fighting against myself along with trying to prove myself to others. I've tried to show people that I am worth something and that I can bring value in various ways, but I've constantly been fighting against myself in one way or another at the same time. Low self-esteem is a bitch, but somehow you learn to live with it.

I guess this is one of the reasons I do what I do today. I work with mental illness and I try to help others to live their lives to the fullest. Regardless of their diagnosis or illness. It is extremely fulfilling to work closely to someone and see the all the progress. One step at a time. To see someone go from being a train-wreck to a flower that fully blossoms is awesome and it sort of fills a hole inside of me knowing that I had something to do with it. That's just who I am as a person. I am someone who cares about others and I put others before myself..

This experience was new to me, even though I had great success during the early days of . I had never really been "a top" anything before, but I knew that much of the things that I told myself was actually my self-esteem talking. I was not worthy the "hype".

Others out there could have done the same things I did with ease.. I questioned myself and I looked down on myself, again. I came up with excuses for why others didn't produce as much comments as me. I was looking for answers for questions that no one even asked.

Looking back though, in hindsight, I can obviously see how much I have improved in writing over the course of these years I have been on the blockchain. I can see how much I have improved in terms of time management, crypto experience and overall blockchain knowledge since I arrived, and LeoFinance was literally the best thing that have happened to me so far on this blockchain. LeoFinance welcomed me with open arms and even though I am not actively producing content like I did when I first joined, LeoFinance has filled another hole inside of me. Even though it sounds cheesy..

Some of our awesome community members paved the way for others including myself and they acted as true leaders when I needed it the most. They showed others what they were capable of doing, and they did that with- or without others just to prove their point. They proved to others that anyone could do certain things and that everyone could have impact in various ways..

They convinced me to push forward, doing my own thing like I had done in the past and that was solid evidence to me that I was worthy and that my actions were appreciated. It proved that I had impact and that I did something meaningful.. So, even though this is not the typical "success story" or "finance" post, it tells you how I got convinced that my investment into this blockchain was an investment worthy to speak of..

It tells you how I, a random Swede in front of a computer screen thousands of miles from you, appreciate the community and how grateful I am for having leaders that are keen to strenghtening the foundation by distributing tokens far and wide. It's a "thank you" note to those who deserves it..

This is only the beginning of this journey, but it has already been a life-changing one for me. In the near future, I hope to be ready to launch something that will strenghten the foundation we have to build upon and by doing one simple act of kindness, change the world for one person at the time.

Thanks to LeoFinance I finally stumbled upon people who seems to share the same mindset & vision as I do and that is worth more than a million to me.

you were one of the few people who motivated me when I decided to start writing here on leofinance. you put in a lot of time and it is mostly impossible to replicate.

just like you leo has given me a huge opportunity to grow my capital. it is strange but I started this year with around 400 dollars and that has tripled over the last two months. i have been exposed to the defi world, I am making little investments in other projects, etc it all started here. this is why I am grateful for leofinance

I'm so glad to hear that!
You've been putting in a lot of work and you didn't let the opportunity go to waste. That's awesome and I'm very happy for you. Hopefully, you'll see another triple shortly. :)

This whole experience has been — and will continue to be — life changing for many of us. I often think of the large communities from places like Venezuela and Nigeria whose lives have been completely changed by their access to this community. If not LeoFinance specifically, then Greater Hive, in some fashion.

And the cool thing? I expect there is much more ahead of us than we have already experienced in the 4-5 years!

I expect there is much more ahead of us than we have already experienced in the 4-5 years!

Exactly. I have seen a lot of stories coming from those countries and it really looks like we've had a large impact on a bunch of these people. We're changing lives on a more or less daily basis with Hive. I think a lot of people forget that part..

I work with mental illness and I try to help others to live their lives to the fullest.

Me too. I mean the mental illness part.
I live with autism spectrum disorder (ASD).
I have multiple disabilities, and I am still trying to improve my life. I am planning to start to help other people's lives.
To be more specific, to join a community, which focuses on sustainable life and recycling.
Your story serves as an inspiration to improve.
Not for the money part, because I will try to live with spending as little money as possible. And the mentioned community is also doing the same.
It is good to have some money, but I do not want to be a millionaire. I do not need to be a millionaire to live a free and happy life.

A place where you truly "fit in" can be a lot better than having a bunch of extra money lying around..

Yes, this is true. I absolutely/completely agree with it.

You have your way with words, and seems like a kind heart too! The reason why you succeed is simply because you put work into it. Great minds and great thinkers can have amazing plans, but if no action is taken... nothing happens. And the ones that may not have the perfect plan, but get things done and inprove as they go, will outperform them! Have a great week!

Thank you very much, I appreciate it. What you say is true, you need to take action to get things done and I've never had any problems with taking actions.

I enjoy reading your posts and am inspired by your grind. I find your explanation on things and your ability to express your epexpreicnes in refreshing to the things I see on here. Thanks for sharing your journey and always keeping us updated 😊

Thanks man, I appreciate it. I'm just trying to keep it real and simple. :)

Thank you very much for the kind words. :)