WTF is BTC even doing? BTC-USD

After the last few days of fucking up readings of charts and people actually seeing it, because I'm posting about it, I'm not feeling too confident. My earnings are doing fine...but that's partially due to swift action, and because I always hedge my bets, and am divested with multiple coins. I actually earned enough to buy some HIVE to power up.

Which is why you shouldn't trade based on some idiot on the internet saying something. They are giving you a portion of the picture. Which is why I frame my posts as "Hey, look at this! What do you think?" and end most of them telling people to educate themselves, so they don't trade without their own ability to look at something and consider it.

With all that being said, it sure does look like BTC is flagging! 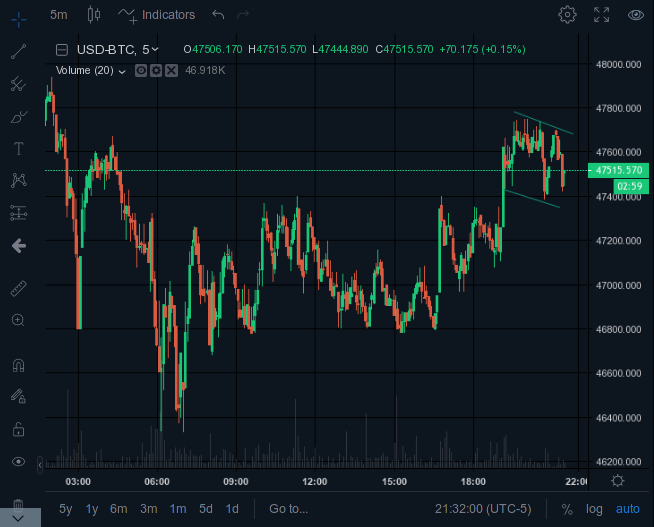 Nope, it's just being a bitch. Earlier in the timeline, that actually looks like multiple little bitchy flags.

And Flags get less guaranteed as they go on.

So now it's in an ascending triangle? WTF does that even mean?

Continuation of what? Going up with the flags, or going down from that last flag?

Also not trading advice. Educate yourself.

Edit: Seems to be doing exactly what I feared. Starting to enter a downward channel. 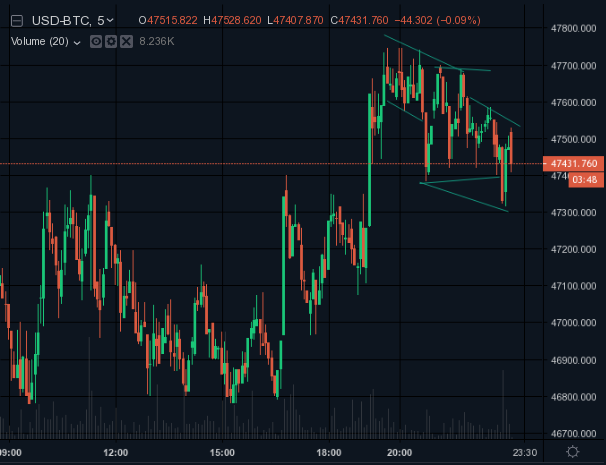 Or perhaps the same one? It honestly just looks like a massive flag to me. It's not going further up tho, is it?

Is it going to ride this channel for a while, or flash up, or crash?

Edit: Funny story...turns out that was a massive flagging pattern... In retrospect it's fucking obvious. Rounded bottom, ever increasing spikes up. Flagging sideways. Then BOOM!

I'm gonna have to wait until it makes some more movement from that massive spire before I buy back in. I don't do well at the top of the chart.

Bitcoin is all about the hype, speculation and influencers at the moment not to much other than that. It all depends if some bit name tweets about it or pushes it in some way.

First of all, trading on a 5 minute chart is a very good way to lose money. If you're looking for patterns on that short of a time frame then you need to be in and out of trades in minutes, not hours. You also need to use leverage to have any chance of making any money. And, of course, with leverage you can get rekted in a hurry. Thus, why you don't trade a 5 minute chart and stay in trades. Find the patterns on 1hr, 4hr, daily. 5m, 15m charts can help you time an entry but you need to spot the entry on the longer term charts before you get that far.

I was very entertained by your article however. Good job!!! :-)