Hive going higher? Pennant in Hive-USD chart? Or is that a flag?

I'm sure many today are kicking themselves today that they don't have more Hive liquid, but that's actually part of what allows us to potentially make higher highs and crash far slower. Due to the low liquidity, large purchases have less Hive to buy, while the power up activity actually puts constant buy in pressure. And that includes for upvote bots. Many that use the upvote bots may keep more liquid, but they also buy Hive to upvote posts, perhaps creating extreme resistance with buys at low points.

But Hive may actually be going higher. 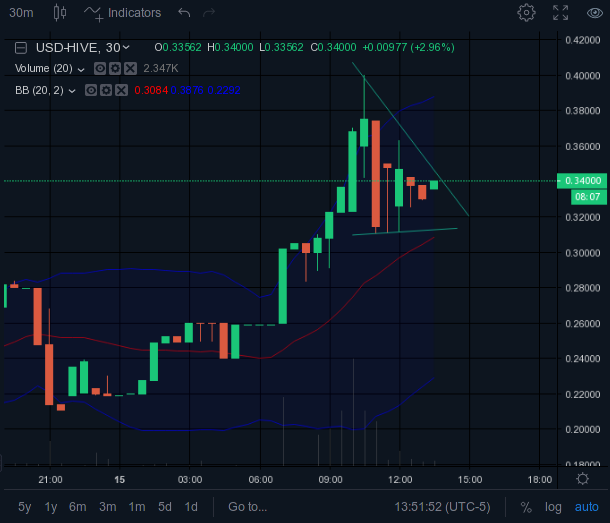 THIS IS JUST MY OPINION, but that certainly looks like a Pennant Pattern!

Of course, I've seen quite a few times where what I thought was one pattern expanded and transformed into another.

Right now I'm watching the chart very careful, hesitant to put any other windows over it for fear that it might start to move, or transform in some way.

I actually wasn't trading Hive before today, and probably still wouldn't be if not for Bittrex locking their Hive wallets. I've been buying Hive for long positions, though quite a bit of it has gone into Hive Engine tokens for powering up as well. I managed to get my account up to 3k HP, and plan to try to shoot for 0.01 upvote, then 0.02 upvote value. In some ways, this shoot up is bad for me in that sense, because it makes it harder to buy in.

But if this spike can get me some profit to buy more Hive lower, that's good. Don't really have the money to buy 2000 hive at this price though.

This is not trading advice! Look at the chart yourself, educate yourself, and make your own determinations. Charts change by the minute and can be misleading. I am not responsible for you or your Paper Hands Mario.

Edit: I'm carefully watching the Order Book right now on Bittrex. There's a pretty large sale at the edge of the pennant pattern, preventing it from breaking out.

I'm betting that gets bought through as soon as it's about to break out upward...or it just disappears.

I find myself wondering if it's actually already broken out of the Pennant Pattern. 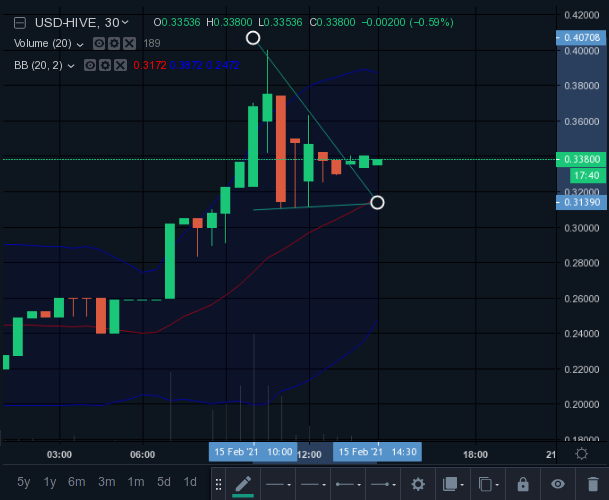 Edit: There's also a chance that's not a Pennant at all. That's never stopped charts before though. We saw multiple charts the other day crash barely making patterns, if at all.

Edit: One of you put in a massive sell order! Who was it! ADMIT IT!

This isn't exactly a good sign...but I don't think it's necessarily a bad sign either. I think it is flagging upwards, but will go a bit sideways a bit first. Maybe.

Or that person might get impatient and just sell it into the buy orders... NOW it's starting to look like a flagging pattern! giddy screaming

Edit: It appears as if it can't decide if it wants to be a Pennant or a Flag. Both are a good sign tho, so I'm okay with it, for now. Edit: Doing a lot of edits of this today, but I'd rather update on the progress than have a post that's immediately outdated. Even if I'd probably make more flooding the blockchain.

This chart is a right bloody mess. Wouldn't you know, as soon as I gave up waiting for it to make a lower buy in I had, and got annoyed with moving it around the order book to be above larger orders, it actually hit low enough it would have got my buy.

Oh well. A few less Hive because I bought in higher.

As you can see from the chart, it still can't really make up it's mind if it's a Pennant or a flag. It's kinda a flag.

It's maintaining itself in a resistance channel, which is good.

What I know about the Indicators, this all looks good to me. I'm still betting on it going up, massively, from here.

Even the order book looks really good. We can blast through pretty much all of those orders.

Trade responsibly. Don't take my opinions as sage advice. They're not.

But you can tip me or upvote me so I can buy some financial books.

Edit: Still maintaining it's place in the upward channel, as well as the flagging pattern. I expect it to try to breakout any moment now.

I'll continue to edit that to update it as things happen.

I think this run up is way healthier than the one we had right after Hive split from Steem. That pump back then to nearly $0.89 was weird. This one seems much healthier and more organic. Finally the altcoins are getting some love!

Hive is just starting.
First phase will be to pass Steem and leave it behind. That will position Hive as the best crypto social alternative.
The liquidity is already looking good with quarter billion in 24 hours.
When the market cap will reach a billion then big investors and advertisers will feel more comfortable getting in.
If the platform and development holds the scale, the sky is the limit.