Bitcoin at these levels is for the rich.

While my emotions may be apparent and I voice uncertainty in recent posts, I actually bet a bit on that recent flagging pattern in Bitcoin-USD.

Despite being heavily invested in Bitcoin, because the amount of money I'm trading with is nothing compared to most traders or investors, let alone millionaires and billionaires, this spike that just happened from $47.5k to above 49k was almost nothing. Not a very good trade tbh.

Earning a few dollars in a day isn't even really worth the time it takes to watch the markets and trade. You risk so much, for just a few dollars.

If you can do trades like that once an hour, that's alright though. $15 an hour is what they're lying to the left wing pretending is a living wage or some shit. In a month you can seriously grow your account. But not easily and make enough to live on at the same time. Largely because $15 an hour really is not that great.

These levels of trades are not common though! Often you'll be really lucky to make a few bucks with a trading account in a single day. If you got a large enough account, you can easily make enough to live on. But then you gotta be rich.

Likewise, if you got in on Bitcoin when it was a lot lower, then this spike feels pretty nice to you likely. But you also may have ended up with "paper hands" at some point looking at how much money is in your account.

Meanwhile, you got other coins that are only a few dollars or cents, that might spike insane amounts, profiting you greatly. These really are more worthy of trading if your account is limited. Just gotta find something you believe in. Like HIVE.

Right now Bitcoin is making a Descending Triangle at the top of it's spike to $49.5k. 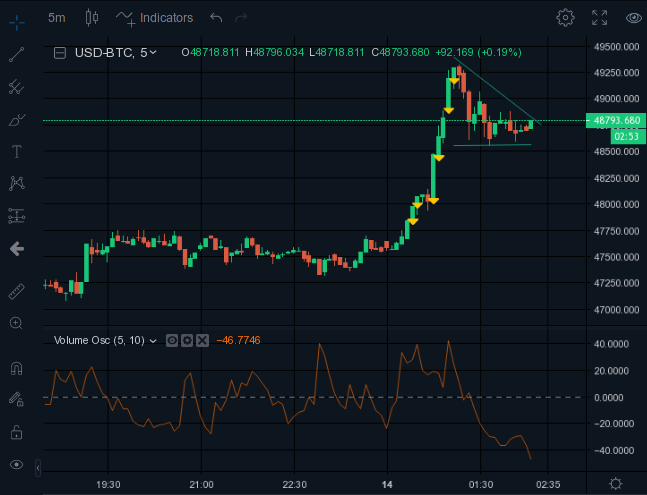 This is normally seen in downward trends, but I think it might actually be a continuation pattern here.

In fact, it looks more like a ramp upward, with a curved bottom. So...not a triangle? And it looks like it's trying to break out upwards.

But honestly I don't fucking care. It is so fucking high on the chart, and requires so much money invested to make only a few bucks, it's not even fucking worth it. I'm switching to other cryptos to trade until we get some halving on this shit. So is it gonna crash a bit from here? Or continue?

Trade responsibly folks! I think I'm out of BTC for the moment. The risks are too high and the rewards too low.

Edit: Took another look. Looks a lot like a flagging pattern, likely going up from here. (In my opinion.) 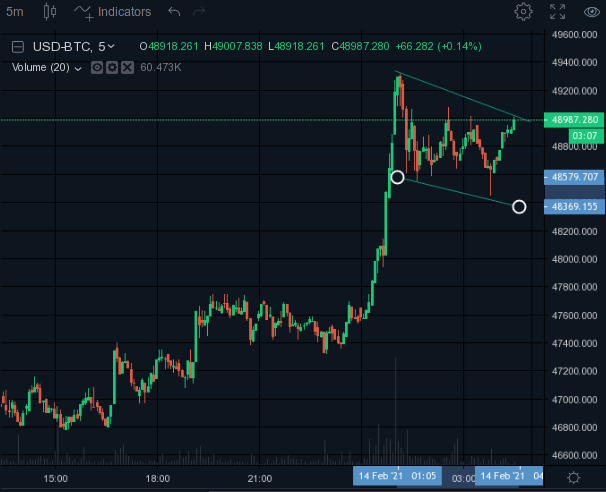 But the risk to reward is too low for me. Not worth changing my orders for the night to get a few bucks on a possible trade.

You are responsible for your own trades. Educate yourself and don't trade on my reading of the fundamentals. The situation changes by the minute and what seems like a good trade now might be a horrid one 5 minutes from now.

Yeah i don’t like bitcoin any more, it is not fun and volatile any more! I like to srll spikes and buy dips, all bitcoin likes to do is go up! It is teuely BUTCOIN now, 💩 coin! Hahait got all sold out! Damp eeet! It’s going ro Zero u know! lel

And it looks like it's trying to break out upwards.

I bet it will. Few months to go in this cycle. Ride the bull.